From Tallest to Most Efficient

The owners of the Sears Tower have announced plans to upgrade the building for sustainability, which will make it the tallest building in the western hemisphere to undergo such an overhaul to date. 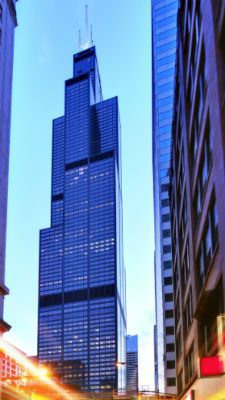 The owners of the Sears Tower have announced plans to upgrade the building for sustainability, which will make it the tallest building in the western hemisphere to undergo such an overhaul to date. Of course, the Sears Tower is the tallest building in the western hemisphere and won’t have any competition for this status. However, considering the size of the project alone, this cannot be done modestly. According to the building’s website, the structure “is a 110-story trophy office tower containing a total enclosed area of approximately 4.56 million gross square feet (SF) and has a rentable area of 3.8 million SF. The Sears Tower’s 4.56 million gross square feet would cover 105 acres if spread across one level. This is the equivalent of 16 city blocks in Chicago. Within the building, there are 25 miles of plumbing, 1,500 miles of electric wiring, 80 miles of elevator cable, and 145,000 light fixtures. The building weighs more than 222,500 tons…” This massive piece of property stands as a case in point for one of the biggest issues facing sustainability today: what to do about existing building stock. Although almost all new office construction today considers sustainability in some way, existing buildings have been estimated to contribute over 40 percent of all greenhouse emissions in this country. The Sears Tower already meets LEED criteria; however, yet this new move will greatly improve its carbon footprint. When finished, the energy savings are anticipated to total over 150,000 barrels of oil every year and equal 68 million kilowatt hours annually. The revamping will also be responsible for the creation of over 3,600 jobs in the area. Estimated at $350 million, the cost of the project is expected to be realized as energy savings within five years of its completion. This bold step by the Sears Tower’s progressive ownership (investors Joseph Chetrit, Joseph Moinian, Lloyd Goldman, Joseph Cayre, and Jeffrey Feil, and Skokie-based American Landmark Properties) will illustrate that even large properties can rise to the standards necessary for creating a sustainable planet. The Sears Tower is a perfect symbol for the green era. Jonathan A. Schein is publisher of MetroGreenBusiness.com and GreenBusinessCareers.com