Talkboys and Talkgirls: How Three Kids Used 12 Batteries a Day

For those of you fortunate enough to have grown up with Talkboys, you know the power of this cassette player and recorder. Its only downfall was that it took four AA batteries, and we were constantly begging my mom for more. 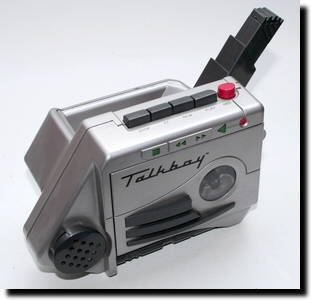 Static. Whispers. Slow-motion laughter. My sister smiled from ear to ear as she pressed play on her Talkgirl. My 6-year-old brother, not one to be one-upped, pressed play on his Talkboy. “Girls have… cooties,” a deep, but somehow slightly chipmunk-sounding voice said. OK, chipmunk version of Macaulay Culkin, my 9-year-old self said. I felt pretty smug as I pressed record on my Talkboy and talked into the magical voice-changer. For those of you fortunate enough to have grown up with these simple voice-transforming machines, you know the power of this cassette player and recorder. The extended plastic microphone gave me a guaranteed chance to be heard, and if I wanted to sound like a grownup, I could slow the playback down. My sister favored speeding hers up to sounds like Alvin from our favorite cartoon, Alvin and the Chipmunks. The three of us made several recordings that really were running sagas; they were recorded narratives that often had a good guy, a bad guy and a pretty tragic ending. What can I say? We were dramatic kids who had a flare for fixing everything in the middle of the story, getting bored and wanting to make it interesting again. Looking back, wow — I’m amazed by how entertaining it was. We were definitely young writers, and I loved directing. Using the Talkboys, I could take a standard trampoline and make it an out-of-this-world trip to the moon, or an underwater adventure. The more I think about it, the more I am truly amazed about two things: first, that no one was hurt, and second, just how many batteries my siblings and I burned through. Talkboy’s only downfall was that it took four AA batteries, and we were constantly begging my mom for more. Energizer batteries were our preferred battery (the Energizer bunny was way cooler than a dependable Duracell battery, after all.) But with only three hours of recording time, we took anything we could get. At the highest point of use, we were using our Talkboy and Talkgirls for three hours a day. Doing the math now, that is significant damage done to the battery supply at our local store. Here is what we blew through with a word problem: Three talkative tots used their three toys seven days a week, using four batteries for each device a day. Here is what that adds up to: three kids X four batteries each X seven days = 84 batteries a week and 336 batteries a month! Luckily, we didn’t keep our habit up for much longer than the month after Christmas, but that January was quite a wasteful month now that I think about it. It’s funny to think that as kids, you really do make more of an impact on your environment than you think you do. But, while my siblings and I should have been recharging our batteries instead of our imaginary spaceships to the moon back then, at least I have this knowledge now. I also know that I will pass environmental consciousness on to my own kids, whom I hope have as much fun with the next big storytelling toy as I did.