So, you go to shop for new gadgets, devices and appliances and you see Energy Star labels everywhere, but you don’t know what they mean. You may know you’re making a good choice for the environment and for your electric bill, but what’s the big deal? 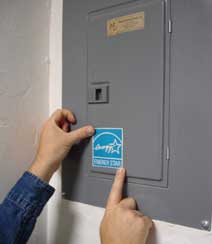 So, you go to shop for new gadgets, devices and appliances and you see Energy Star labels everywhere, but you don’t know what they mean. You may know you’re making a good choice for the environment and for your electric bill, but what’s the big deal? Energy Star was birthed out of efforts from the EPA and U.S. Department of Energy in 1992. The program began as a way to raise awareness of protecting the environment and saving people money. Another objective was to reduce greenhouse gases and promote alternatives to the overuse of energy. It began as a voluntary program that would allow its label to be placed on various devices that met its standards. The first items that were labeled with the Energy Star emblem were computers and monitors. From there, the program expanded to office equipment, heating and cooling systems and eventually made its way to the wide-ranging product list it is today. If it uses electricity, it can qualify for the Energy Star label. By now, everyone knows about the Energy Star light bulbs. These light bulbs can use 50% less electricity and last four times longer than a standard light bulb. These light bulbs have been promoted and advertised by the EPA because of their significant cost and energy savings. According to energystar.gov, “If every American home replaced just one light bulb with an Energy Star-qualified bulb, we would save enough energy to light more than 3 million homes for a year, more than $600 million in annual energy costs and prevent greenhouse gases equivalent to the emissions of more than 800,000 cars.” Light bulbs aren’t the only huge energy saver on the market. Energy Star-qualified computers are also well worth the few extra bucks upfront. Techsoup.org claims that and Energy Star-rated computers use 15 to 25% less energy than a conventional new computer. Many Energy Star computers come with LED monitors, using significantly less energy than other flat-screen models. If you’re really looking to save energy and you’re shopping for a computer, buy a laptop. A laptop computer will automatically save 30 to 80% of energy used depending on the model. There are countless electronics that are graced with the Energy Star label. By purchasing these products a lot of energy usage is curbed and greenhouse gases are reduced. According to energystar.gov, “Last year alone, Americans with the help of Energy Star saved $6 billion on their energy bills and reduced pollution equivalent to that of about 12 million cars.” This staggering fact alone should inspire everyone to purchase Energy Star devices whenever possible. It’s the little choices each individual makes on a daily basis that adds up to a significant impact on the earth. Making a small decision to purchase Energy Star products can influence the world in a huge way. Energy Star has successfully made consumers more conscience of the environment and energy usage. When given a choice, always make the decision to purchase Energy Star-labeled products. Your children’s children will thank you.