I See Mona Lisa in My Coffee: Making Coffee Cups Sustainable (and Creative!)

Sustainability is really something that anyone can do. I think it’s just a matter of knowing what is reasonably implementable for you.

Recently, I walked into an unsightly mess at my boyfriend’s house. This is odd for him; he has cleaning and organization habits that I can’t even fathom keeping. Expecting to see an immaculate counter that day, I instead saw a cluttered mountain of Starbucks cups stuffed in the corner and spilling over onto the stove. “What happened?” I asked, expecting to hear an excuse along the lines of “not having time to clean.” “It’s an art project,” he said. “I’m going to make something.” I asked, “Make what kind of art project?” and we went to the drawing board. Well, actually, we both grabbed a Starbucks cup and sat with it in our hands. Our intense stares into the cups made me think that an onlooker might wonder if the former latte container may currently hold the answer to the mysteries of the universe. We chimed in with our ideas at the same time. “A planter!” I said, pointing to the liner as a surefire way to know that the soil would stay in the cup. 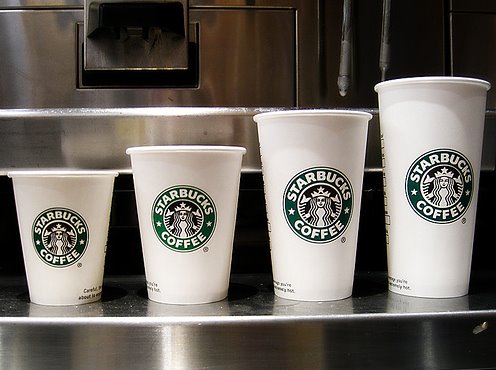 We Googled the idea. While no one had done the small flower planter that I had in mind, someone did use the Frappuccino bottles sold at the grocery store. With milk bottles and spray paint, they made cute alternatives to an expensive flower shop vase. “Soundproofing,” he said, standing up and looking at the wall. My boyfriend’s idea had a pretty interesting theory behind it. He reasoned that people often use egg cartons to soundproof a room, and thought that perhaps the plastic polyethylene from Starbucks lid may actually work. A Google search of that one, though, made us step on the breaks. If we wanted to soundproof anything, it’d be a floor, and we’d have to use polyethylene in thick foam form. Green Depot did make it sound superior for squelching the sound of footsteps on floor though. I wanted my next idea to be great, so I Googled “Starbucks lids” and “art.” It turns out that 130,000 in Sydney, Australia, had beat me to the punch in finding the most spectacular piece of art that you can possibly make with Starbucks cups: a replica of Leonardo da Vinci’s “Mona Lisa.” According to Telegraph.co.uk, attendees of the Rocks Aroma Festival in Sydney, Australia, got to see a painting created with 3,604 cups of coffee and 564 pints of milk. A staff of eight people spent eight hours putting various amounts of coffee into cups. It measures to 20 feet high and 13 feet wide — an impressive and inventive throwback to an iconic piece of art from the Italian Renaissance. So, what is the moral of the story? Always Google before brainstorming. Just kidding. By being creative, I realized that there are many ways to reuse just about anything. In that way, sustainability is really something that anyone can do. I think it’s just a matter of knowing what is reasonably implementable for you at your stage of life. I know that, for now at least, I don’t see myself hiring an eight-person staff to reconstruct an iconic classic — but hey, maybe someday.