It’s Just a Ride: What a Bamboo Bike Means for the Environment (and You)

Why not use a natural resource to fix the waste-producing, energy-sapping metal bike issue?

In a city where it is weird not to have a bike, I have yet to spot a cruiser that didn’t make me sweat its impact on the environment’s resources. (That includes my own bike). But, I don’t feel guilty; by using my bike instead of a car, I am reducing my carbon footprint. After all, cutting out carbon emissions from a car means that I am being as sustainable as possible, right? At least, on the surface, it looks like it. After getting past the fact that I do save gas, I realized that what my bike is made of is just as important to true conservation. 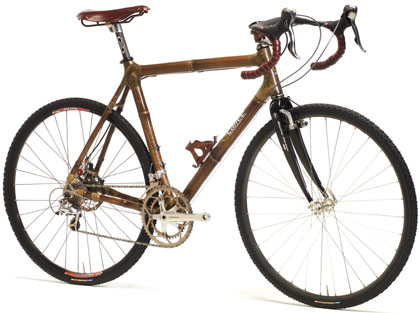 When I looked at the amount of energy required to produce steel, aluminum and titanium frames, I thought about my bike a little differently. While recycled steel and tin cans use 74% less energy than producing it raw, I learned a stunning statistic about just how much steel we use in America. Annually, we consume enough steel and tin cans to make a steel pipe running from Los Angeles to New York… and back, according to The Recycler’s Handbook written by EarthWorks Group. Why not use a natural resource to fix the waste-producing, energy-sapping metal bike issue? Bamboo is, after all, the fastest growing plant on earth, with about 500 species and hundreds of subspecies around the world, according to BikeBamboo.com. Harvested annually, bamboo trees reach full height in one year and gain hardness over the next six to eight. The question, then, is, are these bikes usable as our main source of transportation? Scientists and engineers at The Earth Institute at Columbia University would like to think that cargo bikes made of bamboo would be sustainable. They are testing the theory in Africa, where bikes are often “boda-boda taxis,” due to need for transportation. Approximately 800 bikes were tested in 2009, and the mass number was meant to spread the group’s message, which they did via blog last year. Their main goal was to develop ways to streamline cuts and borings for bamboo to make it more affordable and efficient. The treating time is currently around two hours per frame, which might explain why some companies charge as much as $1,300 per bike. One company that lets you chose your features for your final price is Calfee Design. But, Google will do just as much for your questions. As for the inquiry: Are bamboo bikes simply a fad that is gaining increased value because of demand? Perhaps, says NPR news. Despite the hefty price, interest has spread worldwide, and the coolest part is that it’s supposed to be a smooth ride that lasts for thousands of miles. That’s my kind of bike. I’ll be trading in the beach cruiser when this blog makes me rich and famous.