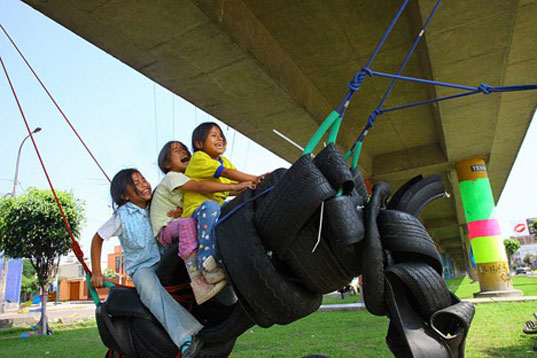 When an abandoned train track was transformed into an elevated urban park space — the High Line — in New York City last year, I was impressed. But now, Lima, Peru, is giving New York a run for its money in the recycled park arena. Spanish architecture firm Basurama has transformed the ruins of a half-finished electric train project that was abandoned in the 1980s into a pretty amazing space called the Ghost Train Park. Cutting right through the center of Lima, the amusement park is free for children and families and features colorful car tire swings, a canopy line and climbing structures, much of which is made from recycled and/or reclaimed materials. Basurama has completed similar projects in other Latin American cities, all focused on making us think about what we throw away. I love the idea of reclaiming unused urban spaces for the benefit of city residents. Kids get a safe place to play, the city gets a facelift and, hopefully, others are inspired to reuse and recycle materials themselves. Just check out some of these great images of the Ghost Train Park. Has recycling ever looked so fun?