McDonald’s recycling programs reuse an astounding amount of waste, but is the company doing enough? 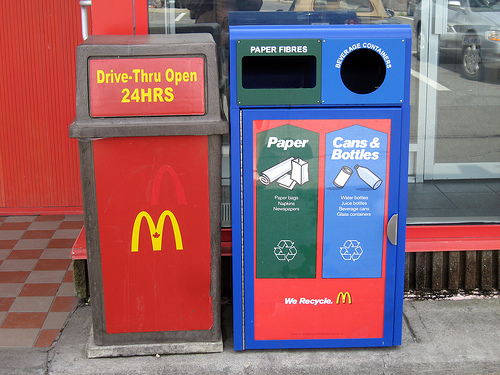 In late 1989, McDonald’s made a splash in the media by announcing a plastics recycling program of unprecedented scale for a corporation of its size. The company’s commitment to begin recycling polystyrene containers (those hamburger “clamshells” many of us remember from our childhood, which the company stopped using all together not long after the announcement) and other products was hailed as the largest, most ambitious effort ever undertaken by a major corporation to recycle plastic refuse. Several months later, in April 1990, the company announced its plan to spend upwards of $100 million each year on recycled construction materials for the construction and remodeling of its restaurants. Together, many environmentalists saw the plans as a huge step in the right direction for corporate environmental responsibility in America. Twenty years later, plenty has changed both for McDonald’s and the corporate recycling landscape as a whole. In today’s post-An Inconvenient Truth world, environmental awareness is more widespread, and corporations are held to a higher level of accountability for their actions — or inactions, as the case may be. So, I thought it would be interesting to take a look at what McDonald’s recycling program looks like today, according to the company’s 2009 corporate responsibility report: There is no doubt that these facts were selected to paint McDonald’s in as positive a light as possible. But, they are impressive numbers — even those of us who may be skeptical about the motives of giant corporations have to admit that. Could McDonald’s be doing more to help the planet? Is their recycling program a case of “greenwashing”? Do they actually care about the environment, or are they just doing this stuff because of public pressure? Who knows… But, I can say this: Whatever the company is doing is a lot better than doing nothing at all. And, when we’re talking about a multinational corporation the size of McDonald’s, “nothing at all” is not something the planet can afford.