Petrol heads of the world unite in appreciation of the wonderful automobile, reinterpreted in various recycled states.

Whether fashioned from discarded car parts or cardboard boxes, it seems that in the hands of the gifted a car can be created from almost anything. Unwanted scraps of metal, textiles and card are twisted, weaved and cut to take on new forms, producing artworks that show the humble motor car in a new light. 1. James Corbett’s Metal Sculptures 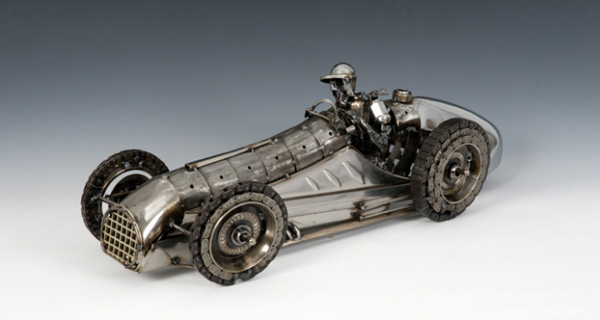 Sometimes success comes from the most unexpected places, as Australian artist James Corbett found. While running an auto recycling business in Brisbane, Corbett discovered he had a rare and untapped talent for creating miniature metal sculptures from scrapped and damaged car parts. Inspired by his love of off-road racing, Corbett’s first creation was an off-road buggy, which brought him no end of praise from family, friends and customers, and so he was encouraged to make more. Corbett would keep an eye out for interesting car parts to be incorporated into his designs. What is unique about Corbett’s creations is that all the parts used are as they were originally – none of the pieces have been bent into shape, which makes them all the more remarkable. This intriguing collection of recycled cars, bikes, birds and animals has been exhibited in various galleries around the world. Check out James Corbett’s website for future shows. 2. Alien 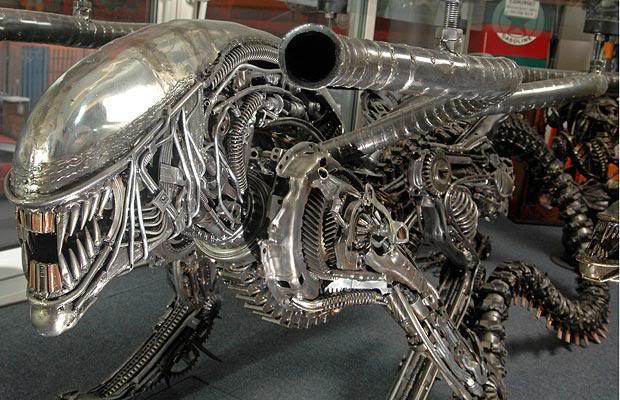 You wouldn’t want to come face to face with this monster on a dark and stormy night. Made totally from used car parts, this replica of one of the creatures from cult movie Alien was created by car distributor Terrence Willment. The company collaborates with manufacturers in Thailand to produce a number of similar works, which are then sold in the Willment showroom in Slough, England. 3. Metal Bull 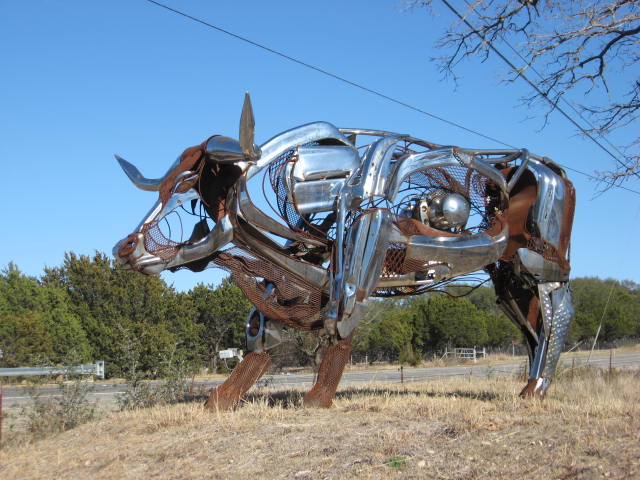 This metallic bovine creation, located in Johnson City, TX, is the work of eco-artist and sculptor Bettye Hamblen. Part of a series of sculptures by the artist, the bull is fashioned from recycled car and motorcycle parts, and is the fifth in the Texas Longhorn Bull collection. Known as Palladin, the bull was created from stainless steel and chrome auto parts using both hot and cold bending methods. Hamblen used specific welding techniques that should prevent corrosion of the welded points over time, while the carbon steel is allowed to rust, transforming the sculpture through the years. 4. Street Car Characters

One enterprising auto parts shop in Moscow used various car parts to create a number of sculptures as a way of advertising their business. From looking at their show-stopping creations, their artistic abilities are going to waste in their day job. Alongside this quirky pair are a metal couple holding hands, a bearded man with a tortoise on a leash (honestly) and an Eiffel Tower/windmill hybrid, among others. With innovative ideas like this in place, business must be booming. 5. Souped Up MG

MG car enthusiasts will either love or hate this recycled redesign of a classic car. The once-upon-a-time zippy sports car was discovered by artists Ann Conte and Jeanna Wiley in a neighbor’s garden. Having been left open to the elements for some time, it must have been a challenge to breathe new life into the rust-covered car. Using more than 500 yards of seat belt fabric and 500 bolts, Wiley and Conte weaved their way to a masterpiece in recycling. Even the gear shift, head lights and tail lights were reinstated in ceramic, while the seats and windscreen were donated by material manufacturers DuPont. The little recycled roadster is on display at the South Shore Art Center in Massachusetts and will make an appearance in DuPont’s booth at Greenbuild 2010. 6. Formula One Car Made from Shoe Boxes 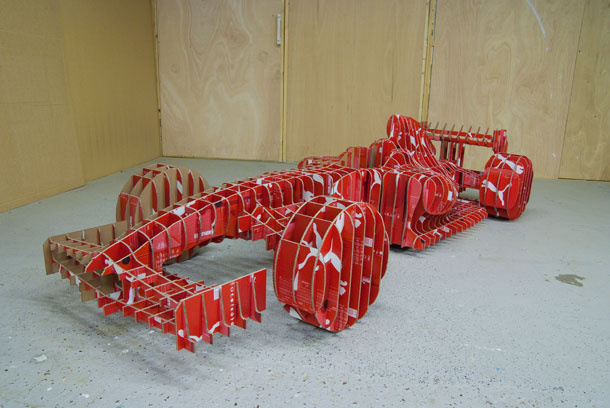 In this age of competitive advertising many companies are willing to shell out big bucks to have their brand connected to Formula One racing. Sponsorship means that companies get to have their name emblazoned on practically everything the team they support owns, as well as having it brandished trackside. One of the companies that has a long standing relationship with Formula One is sportswear company Puma. To celebrate their ongoing collaboration with the sport they asked U.K.-based Wilson Brothers Design to build a Formula One car made entirely from Puma shoe boxes. Creating the car wasn’t easy. It involved scanning a real Formula One vehicle, deconstructing the scans on computer and then carving the desired shapes out of the shoe boxes with an oscillating cutter. According to Ben Wilson of the design team, there were a number of box-shaped casualties during the development stage. Still, the result is pretty fantastic. The cardboard installation is displayed in Puma’s North State Street store in Chicago, so if you’re in town, go take a look.