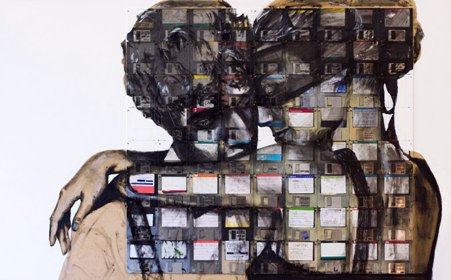 If you remember or have ever used any of the following — VHS or cassette tapes, Polaroid pictures or floppy disks — that will make you a fossil in today’s gadget world of sleek USB sticks and terabyte drives. But, before you start snickering, consider the work of London-based artist Nick Gentry, who breathes new life into old floppy disks by using them as his canvas — with astonishing results. 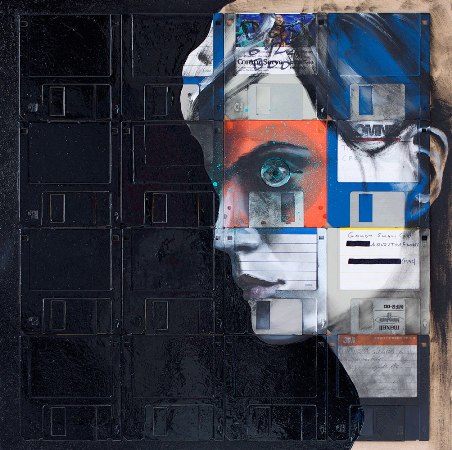 As simple and pragmatic as Gentry’s approach may be — the square floppies provide a natural raster — there’s much one could read into it. Floppies once held our entire lives — love letters next to term papers, poetry attempts and recipes next to accounts and personal records. And, as storage space on them was limited (a laughable 3 MB to 240 MB later on), our collection of floppies grew, a visible and tangible evidence of the important data in our lives. Today, with super storage formats and compressed file sizes, this evidence has become mighty small and intangible.

Gentry is the first to admit more than a wee bit of nostalgia about this fact:

“Since their introduction in 1981, billions upon billions of floppy disks have been manufactured and 30 years later production is coming to an end. Despite their previous dominance, physical media objects will eventually become rare artifacts. The floppy disk stands firm and lives on as a metaphor for the increasing pace of the modern life cycle, mass production and the throwaway culture of today.” 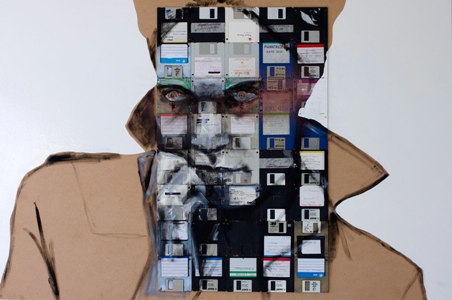 The recycling aspect of Gentry’s approach is evident: If an artist can use something as physically uninspiring as floppy disks and create something amazing, then we can all be a bit more creative in our everyday lives and think before throwing something away. Says Gentry:

“Reusing objects can negate the need for waste, with a new function that also often has more charm than that of the original. Seeing art produced in this way can encourage a more creative approach to everyday objects that are deemed to be obsolete or useless. What brings the overall concept to life is that blend of the nostalgic and familiar, together with the freshness of a new form of expression.” 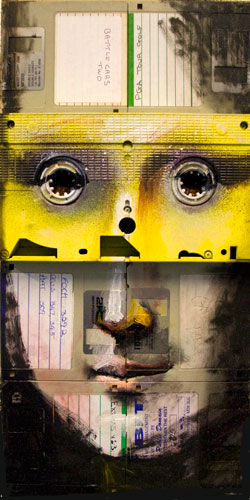 It is no coincidence that in many of his artworks, Gentry uses the metal circular hub on the reverse side of the floppy as a person’s eye. It is a visual metaphor for the human eye that can provide a clue to a person’s feelings and identity. Just as the floppy disk’s data is still there, but not accessible anymore, a person might give clues about her or his emotional state without actually allowing access. 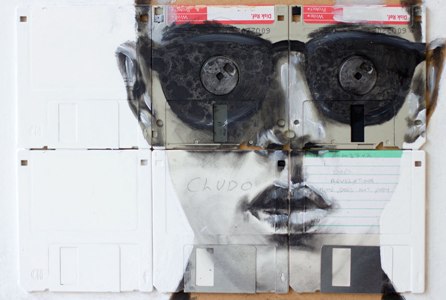 It is therefore important for Gentry to keep the floppy’s circular hub, metal slider, label and any writing on it visible in his finished piece as evidence of the disk’s former life. The whole process starts with him choosing the disks that fit in terms of color and then laying them out according to the portrait he has in mind. He then spray paints most parts of the disks over before painting on the details of the image with oil paints. 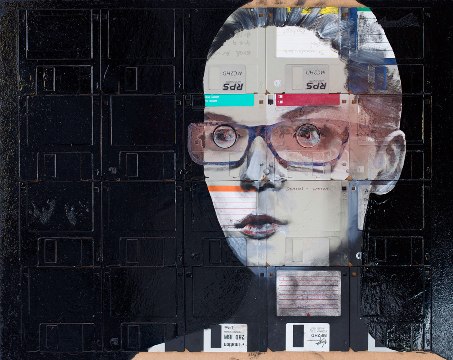 Now if you remember the 3½-inch floppy’s predecessor, the 5¼-inch or even 8-inch floppy disks that actually used to be flexible and gave the whole storage medium its name, then you’re a real fossil. 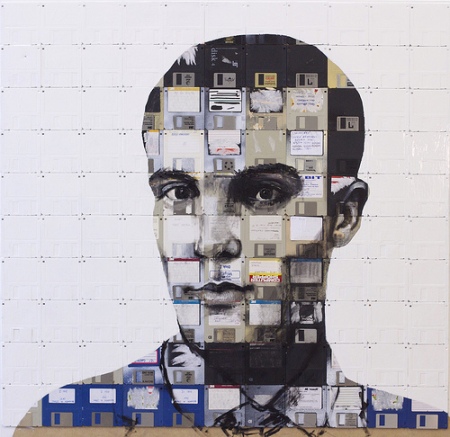 For more about Nick Gentry or to donate your old floppies, visit his website or Flickr photostream. Sources: 1, 2, 3, 4, 5