Shorn locks can help soak up the lingering oil in the Gulf.

An environmental tragedy continues to unfold 5,000 feet under the Gulf of Mexico, where for the past three-plus weeks, oil has been gushing from the ruptured Deepwater Horizon at a rate of 5,000 barrels (or 210,000 gallons) each day. BP has been working feverishly to intersect the leaking well by installing the first of three massive 100-ton steel and concrete containment domes, which it anticipates will successfully funnel 85% of the wayward oil to a nearby drilling vessel. In the meantime, unpredictable weather patterns have been altering the spill zone on a daily basis along with the application of a chemical dispersant that eco-toxicologists fear will prompt bound oil globules to sink to the ocean floor, triggering far-reaching eco-consequences for potentially decades to come. 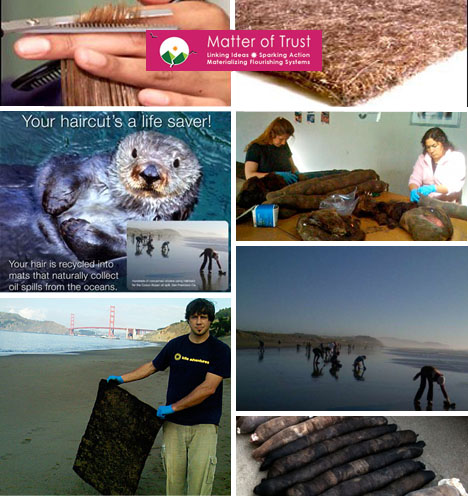 With all of this uncertainty at play, it is comforting to know that a surprisingly organic solution is being pursued thanks to efforts of San Francisco’s 12-year-old nonprofit organization, Matter of Trust. For the last several years, Matter of Trust has relied on volunteers to weave very low cost, 1-foot-wide square mats as well as hair booms made with donated hair clippings culled from countrywide pet groomers, barber shops and hair salons stuffed into nylon stockings. The resulting hair carpets and hair sausages, which were employed during cleanup efforts for the 2,600 oil spills that occurred in 2009 alone, are naturally able to attract oil molecules due to the roof-shingle-like exterior of each hair strand (also known as the cuticle). To understand the value of these makeshift devices, it’s helpful to recognize that a quart of oil can be absorbed by 1 pound of hair in just one minute. Despite environmental experts asserting that hair-packed booms aren’t nearly as effective in open water as they are closer to land (since waves can wash oil-contaminated water right over them), they have been used with great success along the edge of coastlines for their sponge-like qualities and can be wrung out and reused up to 100 times. Even more impressive, 98% of the oil that they soak up can actually be recovered. Currently, Matter of Trust has stockpiled 450,000 pounds of globally donated locks (including human hair, horse and pet hair, wool and feathers) in its 20,000-square-foot Fort Meyers, FL, warehouse and will be distributing the final booms and mats to 17 Gulf Coast beach locations. In addition to organizing social “Boom-B-Q” volunteerism events in the communities most affected by the path of the oil spill, Matter of Trust is urging individuals to visit its website in order to find out how to arrange bulk hair collections and/or donate washed panty hose (even with minor tears in them). If you ever wanted to make a difference on behalf of the environment, now is the time!