Giant Wind Chime with a Twist

Architect Mike Tonkin and Anna Liu’s Singing Ringing Tree is a giant wind chime with a twist, to be found in Burnley, north west England. 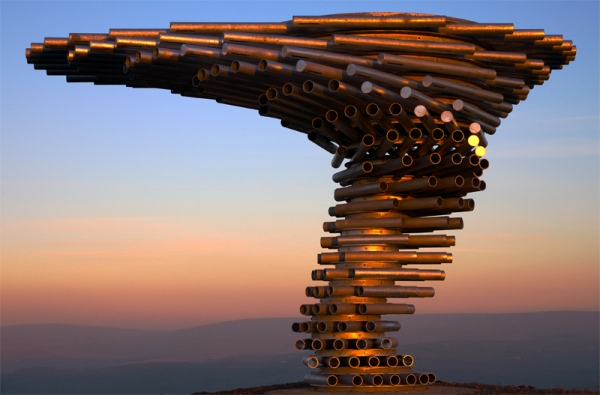 Towering 3 meters over the town of Burnley in Lancashire in the north west of England is a wind chime of a different kind. Made of galvanized steel pipes, the Singing Ringing Tree is an award-winning project by London-based architects Mike Tonkin and Anna Liu. The wind-powered sound sculpture produces its own tune that covers several octaves, discordant and melodious at the same time. Some of the pipes have been cut at the end to produce the sound; others have a primarily structural and aesthetic purpose. Similar to the pipes of an organ, some of the cut pipes were tuned according to their length by adding holes to their underside. Thus, like a mad organ player, the wind rolling over the Pennine mountain range can compose ever-changing melodies, calming at times and haunting at others. Galvanized steel has never been so beautiful: 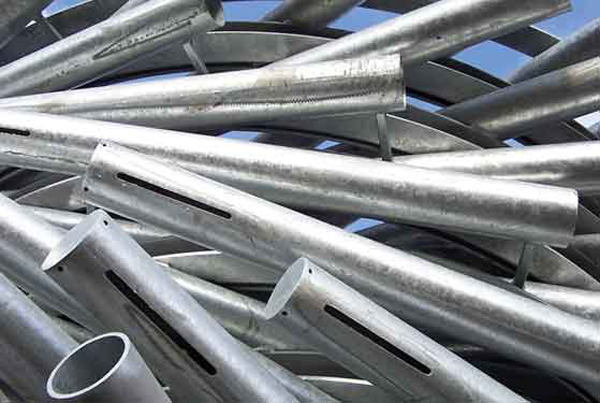 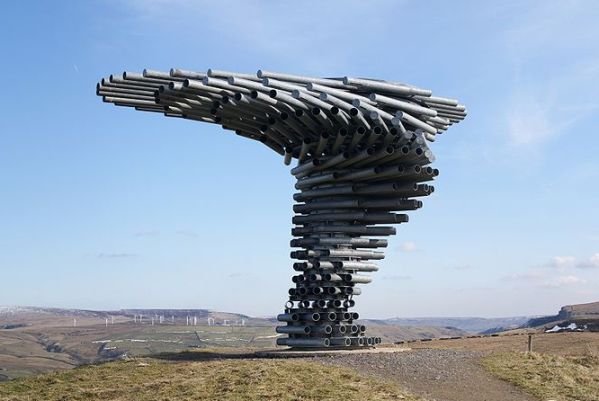 The Singing Ringing Tree was completed in 2006 and is one in a series of four sculptures within the Panopticons arts and regeneration project aiming to create landmarks in the Lancashire countryside. An animation of how the sculpture changes with the wind: 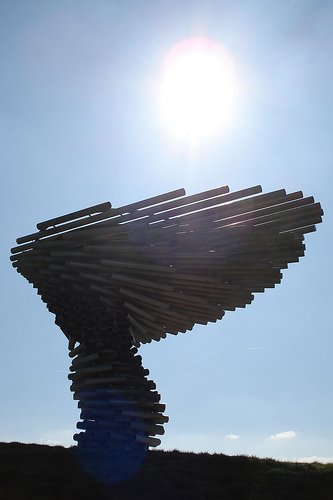 Photo: Wendy Mann The Singing Ringing Tree stands at the site of a former re-diffusion transmission station that included a dilapidated brick building and unused telegraph lines. The former was torn down and the lines cut to be recycled. Though some might have a problem seeing a tree in this abstract sculpture, the idea of a wind-swept tree giving shelter — and music — was vital to the architects:

“From Burnley the tree’s profile will be visible on the horizon, appearing and disappearing in the mist. As the wind passes different length pipes in different layers, the tree sings different chords. Each time you sit under the shelter of the tree you will hear a different song.”

Here’s a day in the life of the Singing Ringing Tree from sunrise to sunset, making the sculpture look like a giant question mark. Or an exclamation mark? If the Singing Ringing Tree’s name rings a bell with some, they might be thinking of the 1957 East German movie by the same name. The BBC broadcast the film in the ’60s and ’70s as a three-part miniseries. Like many stories by the Brothers Grimm, The Singing Ringing Tree is a fairy tale full of magical creatures that has fascinated and haunted generations of children alike with its rather dark setting and mood. In a nod to this children’s cult classic, Tonkin and Liu have found an apt name for their beautiful yet strangely haunting sculpture. Sources: 1, 2, 3, 4, 5