The Army of Trash Figures Slowly Conquering the World

German artist HA Schult has created an army of Trash People that travels the world. 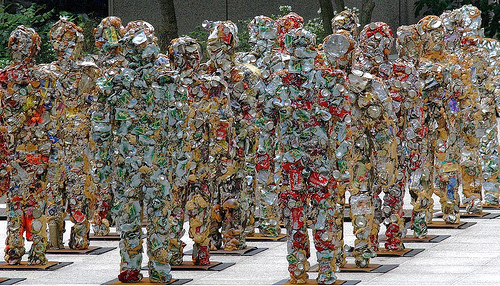 There is an army out there, traveling to the most important places around the world. Every year, they target a new city in which to regroup and form their trademark lines. With their bodies made out of crushed cans, electronic trash and other waste products of society, they stand guard, statue-like. We’re talking about the Trash People of course, an army comprised of 1,000 individual soldiers made out of the rubbish we produce. Their intentions? Friendly but firm.

At the Piazza del Popolo in Rome: 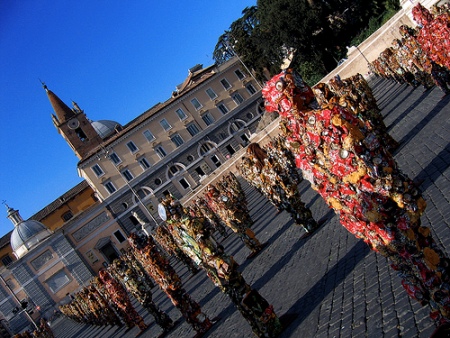 The Trash People, or Schrottarmee in German, are the brainchild of H.A. Schult, a German artist well known for his action art (“Aktionskunst”) and using rubbish as a critical reflection on our waste society. Using garbage as his main material is no issue for Schult, who is known by his trademark quote, “We produce trash, are born from trash, and will turn back into trash.” Some even go so far to say that his Trash People are images of ourselves.

Hey, that’s you in garbage: 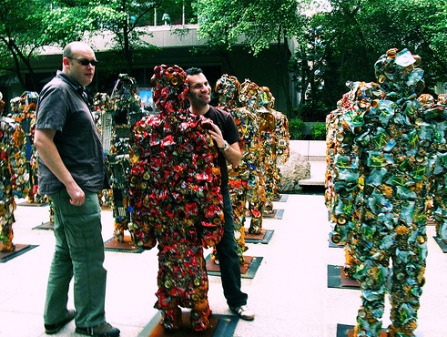 In a statement on his website, Schult stresses the fact that artists today are free as never before to use the materials they like, even trash. And, using something we are so connected with seems obvious to Schult:

Look into my trashy eyes, baby: 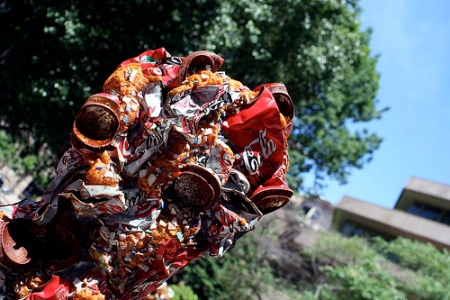 It takes a video to grasp the magnitude of the Trash People, here at an installation in Plaça Reial, Barcelona: The Trash People were first assembled at the amphitheater in Xanten in 1996. In this small central German town near the Dutch border, the idea was born to send them traveling around the world. Once the idea was born, there was no stopping them. Since then, the Trash People have seen Moscow’s Red Square and Paris (both in 1999); then the Great Wall of China in 2001; the Pyramids of Giza in 2002; Kilkenny Castle and Zermatt, Switzerland (both in 2003); the controversial radioactive waste disposal facility in Gorleben, Germany in 2004; Brussels (2005); Cologne (2006); Rome and Barcelona (both in 2007); New York in 2008; and finally the Arctic in 2010. Who would’ve thought traveling trash could be so beautiful? 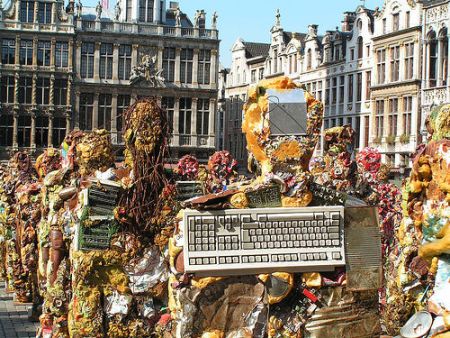 Since the late 1960s, Schult has been known for his public art installations, something he calls “situations.” He has flooded both a street in Munich and St. Mark’s Square in Venice with trash and paper; he even created a paper river in New York. Luckily, now he is so well known that he doesn’t get arrested for his action art anymore.

A sea of trash… people: 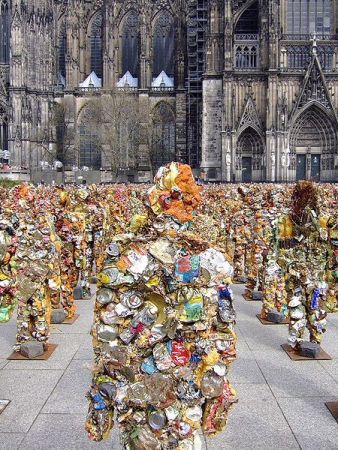 Schult was born Hans-Jürgen Schult in Parchim, Mecklenburg in 1939. He studied at the Academy of Arts (Kunstakademie) in Düsseldorf from 1958 to 1961 under teachers like Joseph Fassbender and Joseph Beuys. As his main inspirations at the time, Schult credits Yves Klein, Georges Mathieu and Jackson Pollock. Due to the often epic scale of his work, especially the Trash People, Schult has been called the “German Christo.”

The artist with one of his creations in Cologne in 2006: 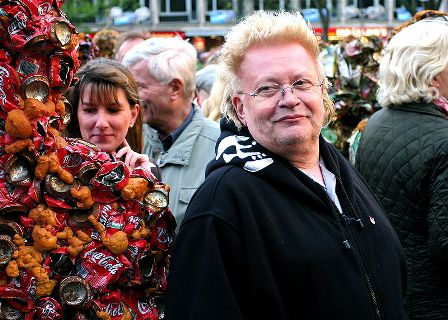 More information about this pioneer of environmental awareness and ardent proponent of the new ecological consciousness can be found on HA Schult’s website (here in German). Other sources: 1, 2