The most recycled painting in the world gets a new layer of reuse, as these artists use recycled materials to recreate Leonardo da Vinci’s 16th century masterpiece.

Art itself may be argued to be a constant process of recycling: an irregular flow of ideas and techniques in which “creation” starts with what already exists. The “world’s most famous painting,” da Vinci’s “Mona Lisa,” has been persistently recycled over the years, recapitulated in every guise imaginable, from moustaches and burkhas, to the Simpsons and Pamela Anderson. Recent reincarnations have managed to add a new dimension, melding concept with technique as they reproduce the world’s most recycled painting using recycled materials — what we see before us are, in effect, recycled “recyclings.” 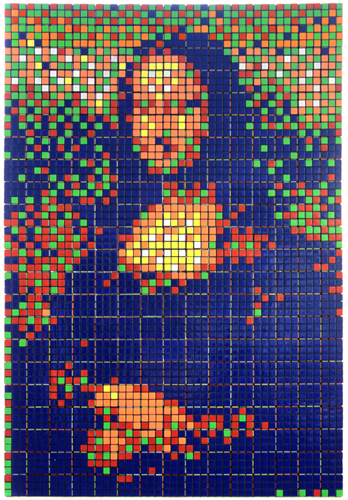 Rubik’s Cubes are famously frustrating, taking hours or even days to complete. Breaking open the cube and creatively rearranging the squares as we please is a feeling many who have tried to solve the puzzle have had at some time, but artist David Griebeling has gone one further, repurposing a number of cubes into the image of one of art’s great masterpieces. The effect is most powerful when viewed from afar, and is remarkable for the way it overcomes the cube’s limited palette of six colors. Griebeling took two days and used nearly 800 of the cult 1980s cubes to create his modern take on the Mona Lisa, giving fresh life to both a frustrating puzzle and the most famous painting in the world. 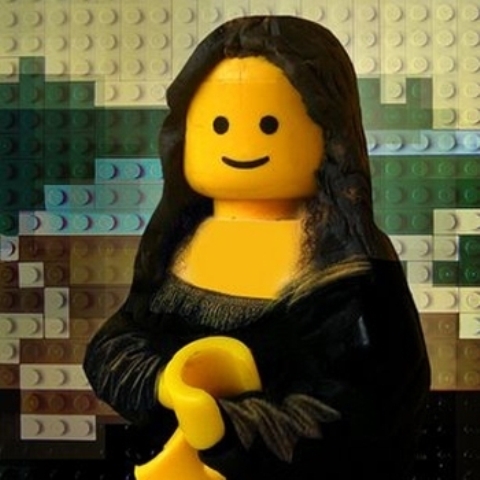 Italian artist Marco Pece created this bizarre (and whimsical) version of the Mona Lisa using old bits of another cult toy, Legos. The Mona Lisa’s famously enigmatic expression is transformed into the banal smirk of the Lego figure, her carefully rendered skin tone becomes a garish shade of pure Lego yellow, and her delicately clasped hands are now replaced by rudimentary Lego claws. Some might find it odd, but Pece has carved out a niche for himself, creating Lego versions of classic pieces by artists as diverse as Jan Vermeer, Jack Vettriano and Raphael. Pece claims it takes him around nine days to create a Lego work, which perversely is longer than many of the originals took to be painted. 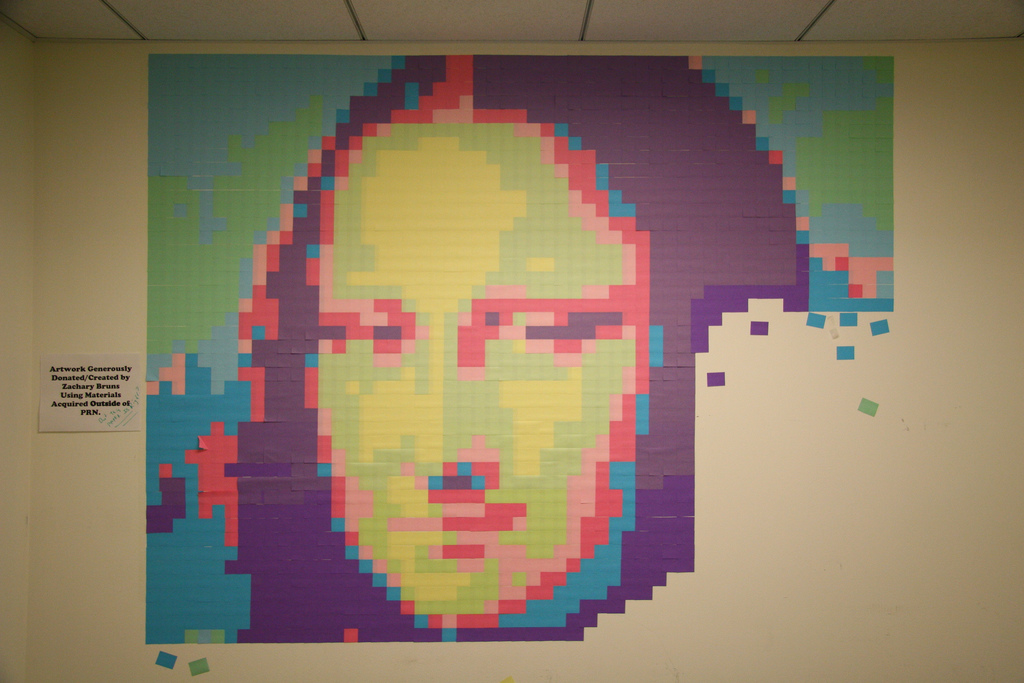 Every day, millions of sticky notes are used around the world to convey short messages or reminders and then cast into the bin. Iowa artist Shay Hovell has come up with an ingenious way to recycle these little notes, arranging 12,000 of them into the image of the Mona Lisa. This quirky work manages to bring about an iconoclastic collision between the serious, academic world of art history and a tiny workplace object that couldn’t be more trivial if it tried. Unfortunately, Shay’s work has now been destroyed, but the image above gives an idea of what a sticky note Mona Lisa looks like. Check out the video of Shay at work here. 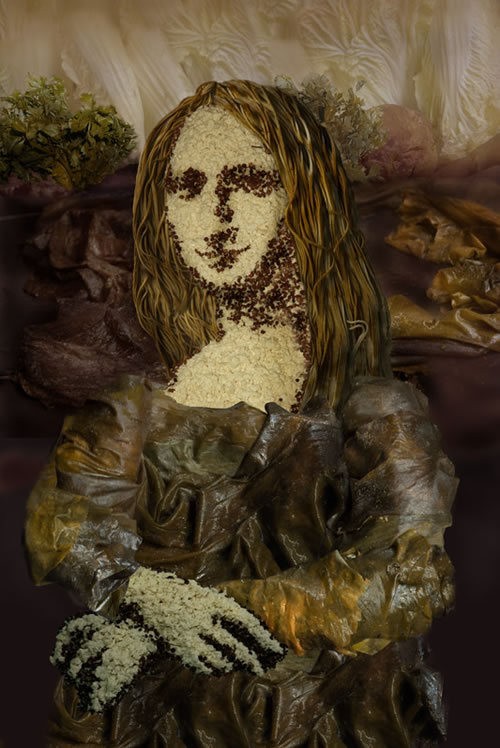 Most of us wouldn’t consider doing anything with a vegetable other than placing it on the dinner plate as a healthy accompaniment to our meal. Ju Duoqi, a computer game programmer from Sichuan province, China, has other ideas though. The 35 year-old uses vegetables to recreate art history’s iconic pieces — in this case the Mona Lisa made out of tofu. There’s an extra dimension of repurposing at work here too: After Duoqi boils, dries or pickles the vegetables to perfect their appearance and assembles them into the desired image (adding the fastest-rotting ingredients last), she turns it into a meal. Recycled art you can eat! 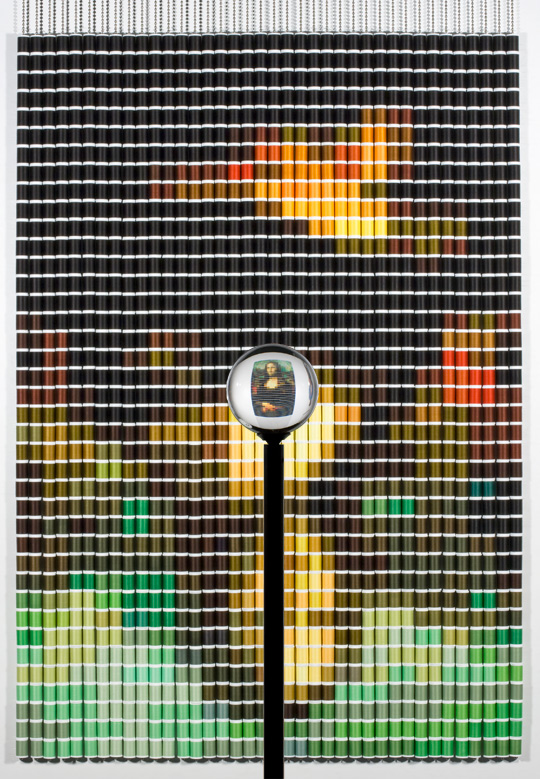 Devorah Sperber is known for creating pixilated versions of famous works of art using recycled thread spools, chenille pipe cleaners and map tacks that act as optical illusions. Her work “After the Mona Lisa 2″ uses 5,184 spools hung in long, adjacent columns to create an inverted, pointillist version of the Mona Lisa. Viewed by the naked eye, the image is loose and ill defined, but viewed through the optical tack, the spools are inverted and transformed into a contiguous and faithful image of da Vinci’s famous work. 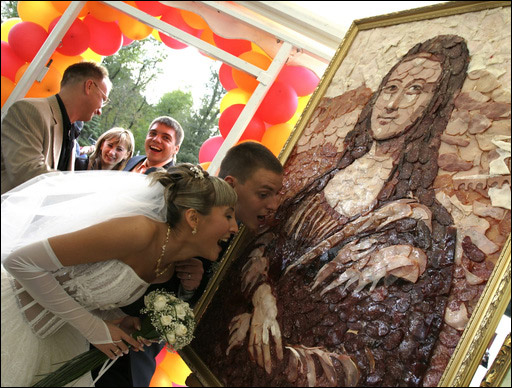 The strange fascination with reusing food stuffs to recreate famous artworks continues, as artists in Russia have created a version of the Mona Lisa made entirely out of sliced sausages. Once again, there are multiple currents of reuse at play, as the work is displayed so viewers can not only admire it, but also devour it. The idea of eating a sausage Mona Lisa might be argued to be a pure expression of the way the art world has headed toward the consumer and consumption in recent years (particularly given the number of mugs, T-shirts and mouse mats with the image of the Mona Lisa) — literally devouring old masters. 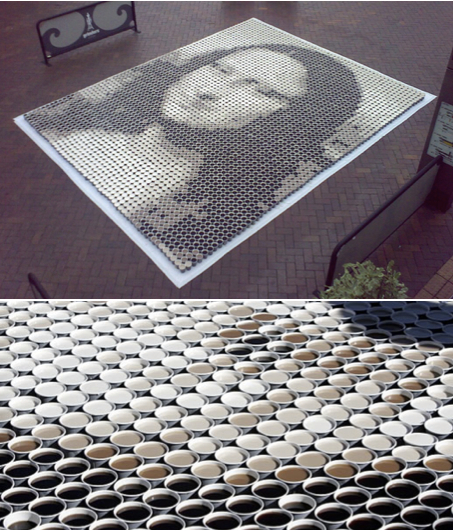 At the 2009 Aroma Festival in Sydney, Australia (an annual coffee festival), volunteers repurposed 3,604 cups of perfectly mixed coffee to create the amusingly titled “Mocha Lisa.” This incredible coffee masterpiece took eight people three hours and 564 pints of milk to complete, eventually measuring 20 feet by 13 feet. Even more incredible was the feat of perfect milk blending that created the variety of sepia tones that make up the famous image. 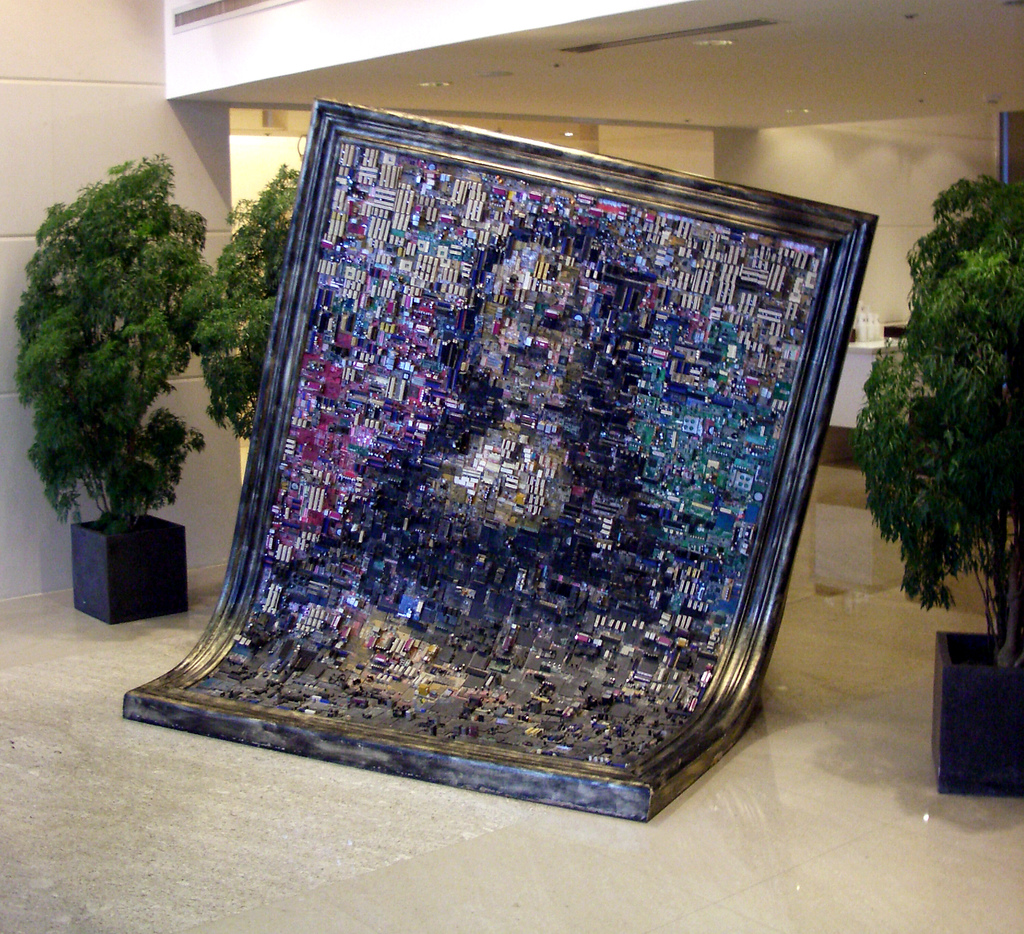 In the lobby of electronics manufacturer, Asus’ main office in Taiwan sits a strange and beautiful tribute to the Mona Lisa. Assembled from the innards of dead computers, reprocessing abandoned circuitry into the image of da Vinci’s sublime masterpiece, the idea behind the work came from a team of Asus employees, who’ve pledged to support “any crazy idea.” In truth, the idea isn’t so crazy, updating one of art’s great works into the digital and eco-friendly age. The result is geekishly captivating — an ode to a techie’s view of the world and of art history. 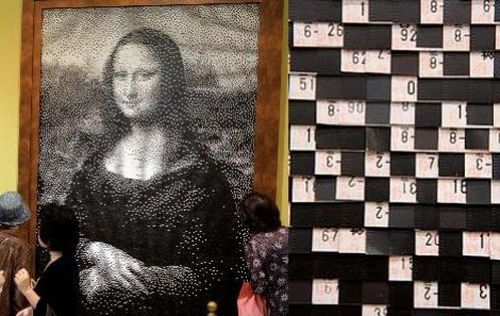 Employees of a department store in Osaka, Japan, constructed a 2.5- by 1.5-meter version of the Mona Lisa, made entirely from meticulously overlapped recycled train tickets, collected from the Japanese rail system. It took 300 workers nearly three months to complete the project, which used 320,000 train tickets. Like the Rubik’s Cube Mona Lisa, the work is notable for the way it overcomes the black and white shades of the tickets to create a tonally gradated image. This intrepid band of recyclers-cum-artists didn’t stop there, though, creating train ticket versions of Renoir’s “Bal au Moulin de la Galette” and Botticelli’s ‘The Birth of Venus.” 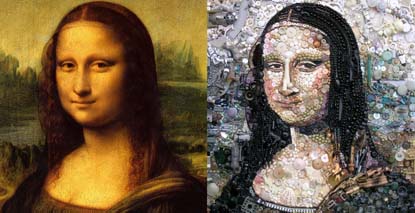 Using everything from old toys and buttons, to recycled plastic cutlery and spools, gathered from her neighbor’s garbage bags, Jane Perkins constructed this intricate likeness of the Mona Lisa. The result is a collage that gives new texture to the most famous painting on earth, yet remains remarkably faithful to the expression and coloring of the original. If you have a spare few hours and some unwanted items you like to make use of, we wholeheartedly encourage you to give it a go yourself!