Boris Bally believes that there’s more to road signs than meets the eye – which is why he’s made a career out of remixing street furniture for the living room! 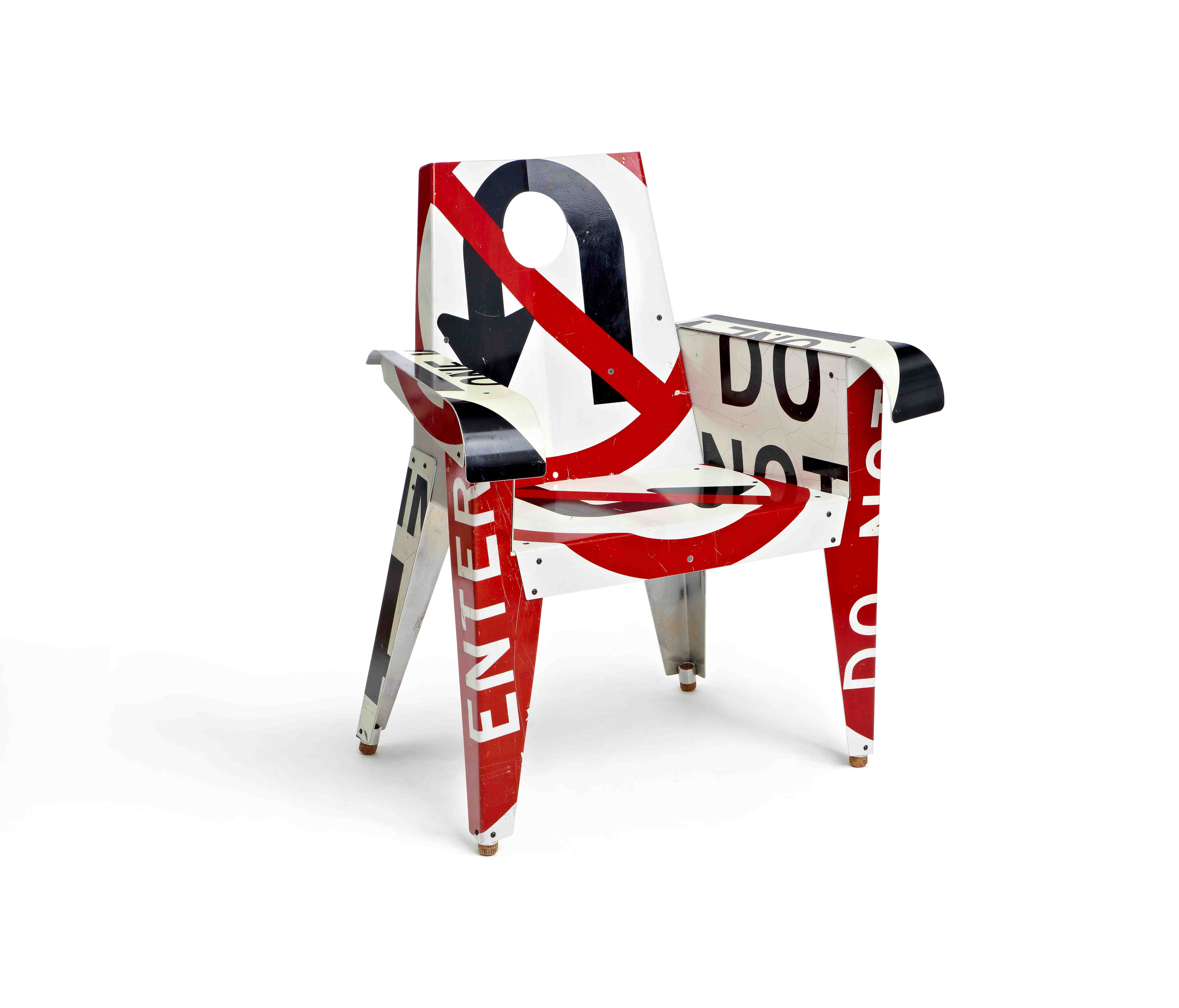 Most people look to street signs for direction, but when “material smith” Boris Bally looks up, he sees inspiration! In fact, the accomplished metalworker has made a career from reclaiming and recycling abandoned signs to build stunning pieces of furniture. Indeed, rather than smoothing off the original printed symbols, he emphasizes them, making their designs the focal point of his work. 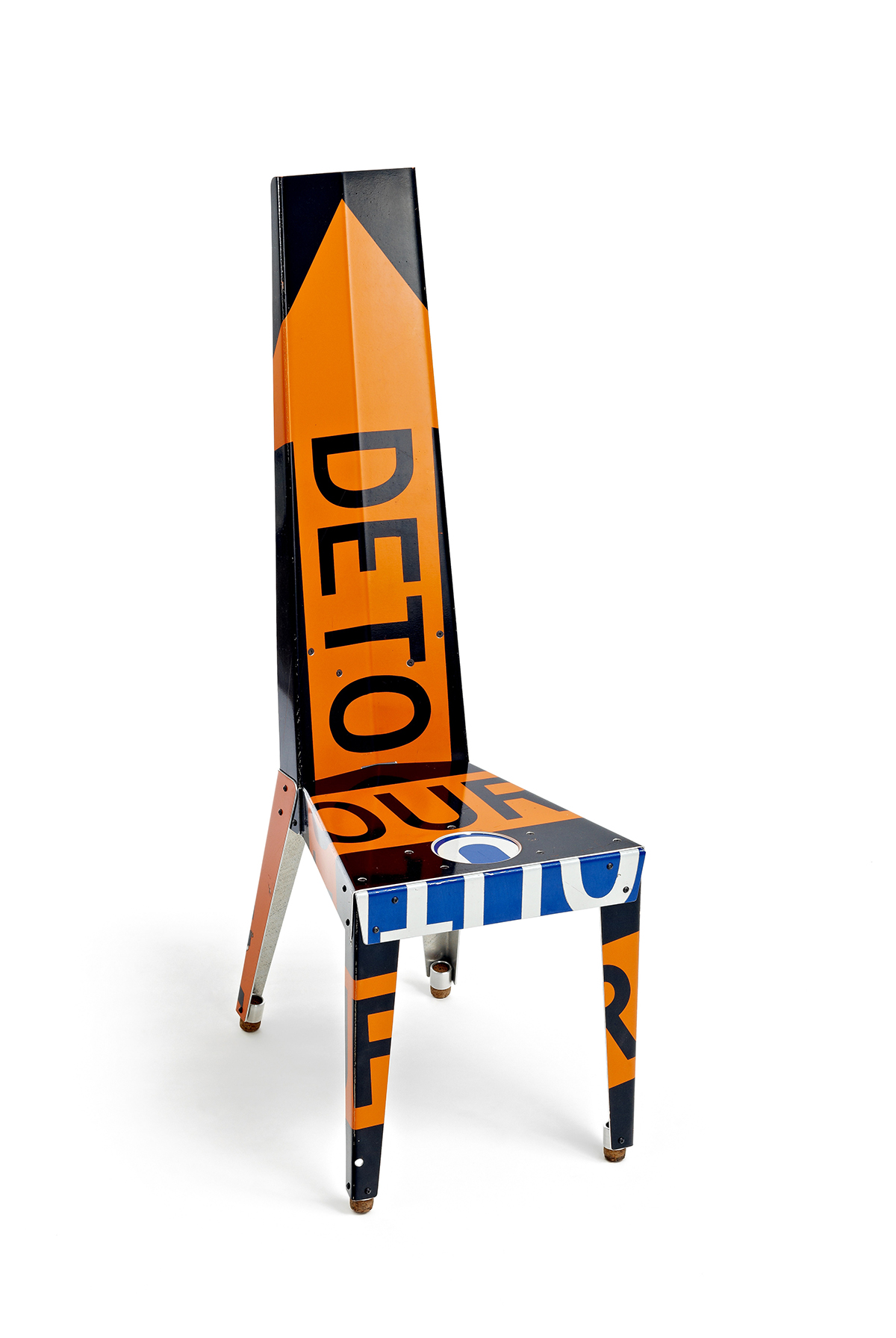 As it turns out, street signs are in Bally’s blood. His father was an award-winning industrial designer, and Boris grew up around metalwork. It was there that he first saw signs being worked on, simply for want of material. However, the habit caught on, until finally as an adult he decided to utilize the signs’ original printed forms, remixing the “pop iconography” of the street as a designer product. 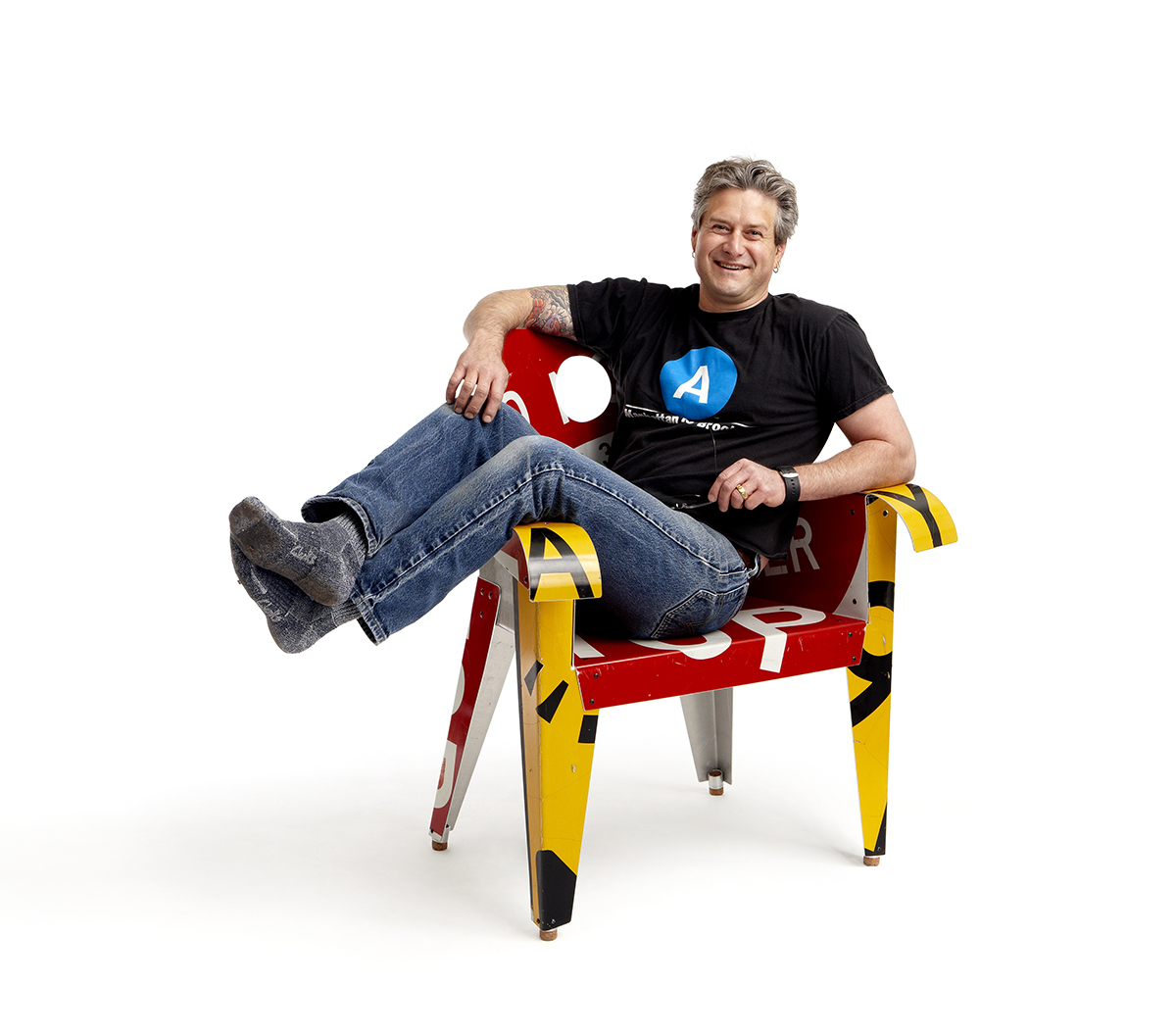 “I felt the lettering was beautiful and that destroying the signs was wrong,” he told Jori Finkel of Art & Auction. “Using street signs can even be illegal, but that’s part of the thrill for me and, I suspect, my collectors.” 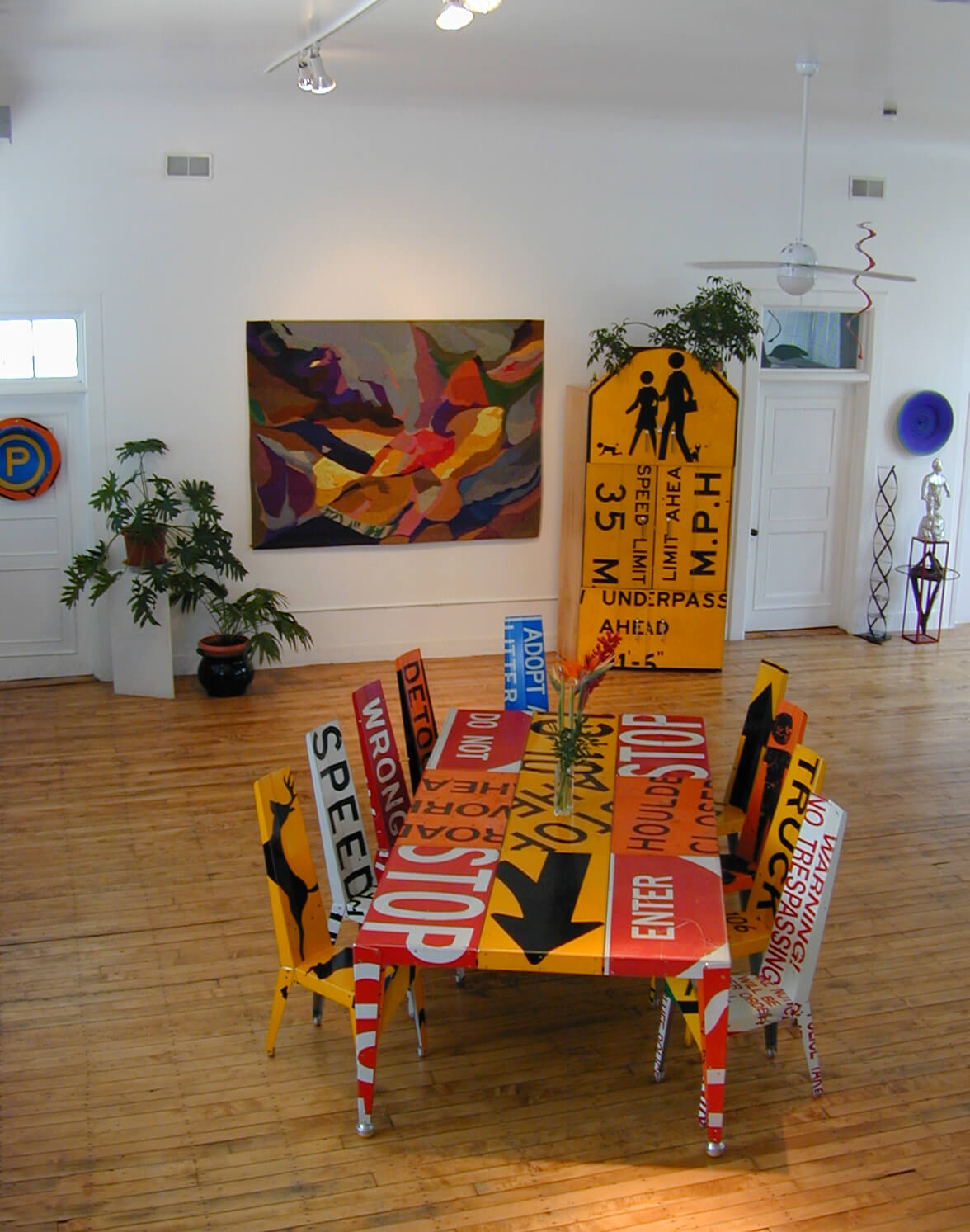 He added: “Our resources on the planet are finite, and the best test of an artist is how well we can use what we have at hand.” 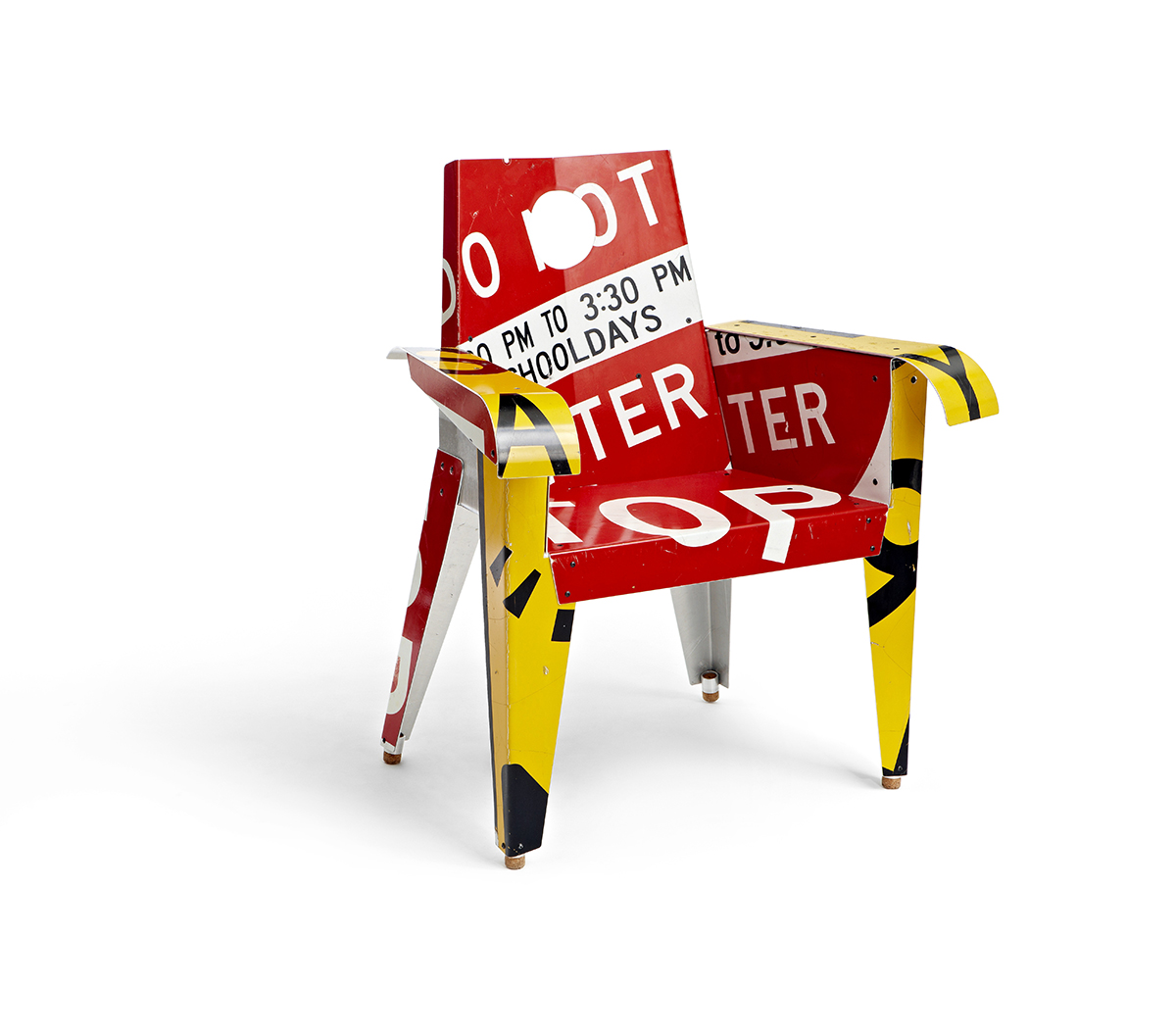 The process of building the chairs is harder than you might imagine. In each case, the signs have to be bent into shape, usually with the help of a bending brake, which can take two strong men to operate. 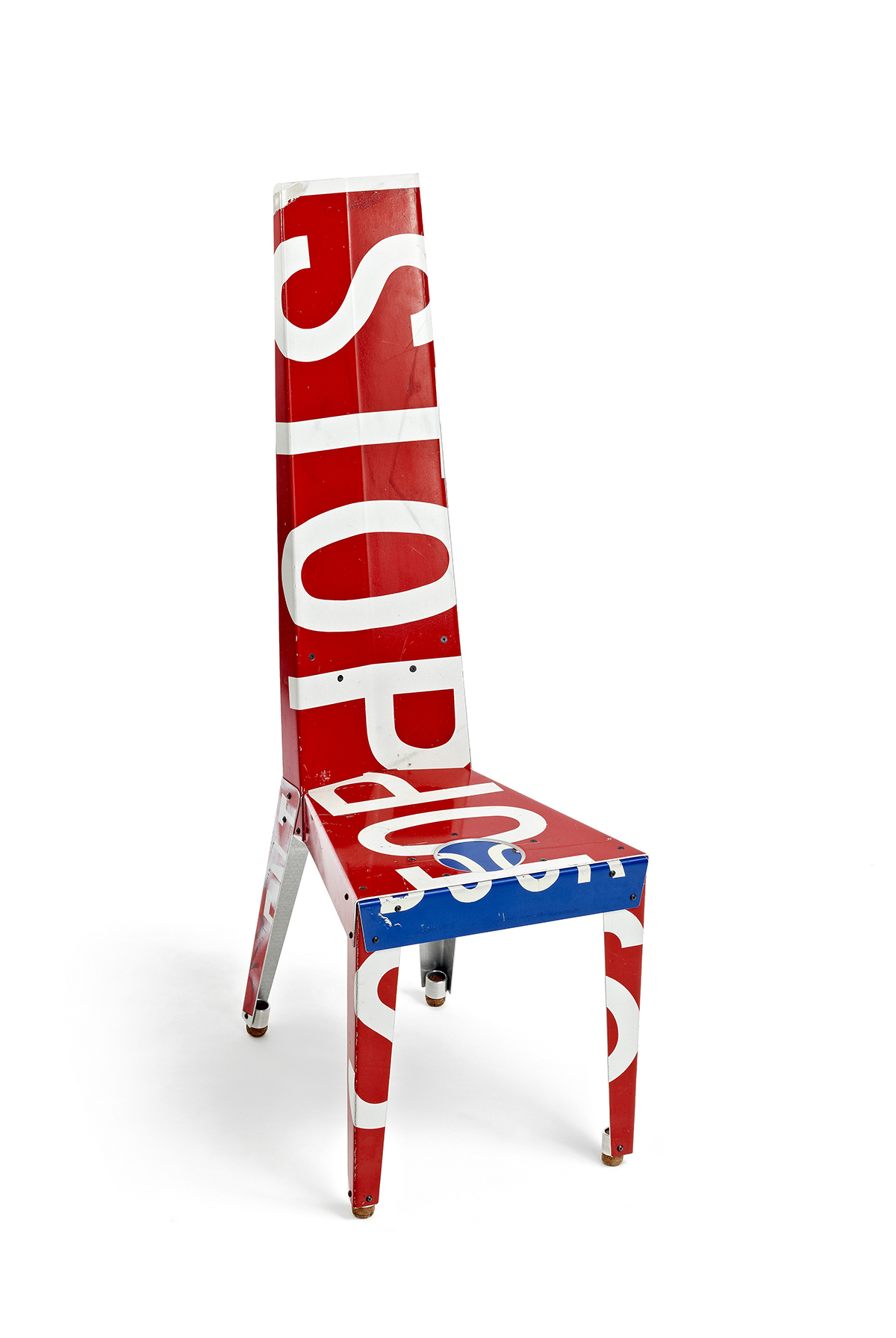 Clients sometimes request pieces to feature specific designs, but it doesn’t work that way, as Bally works with what he finds. 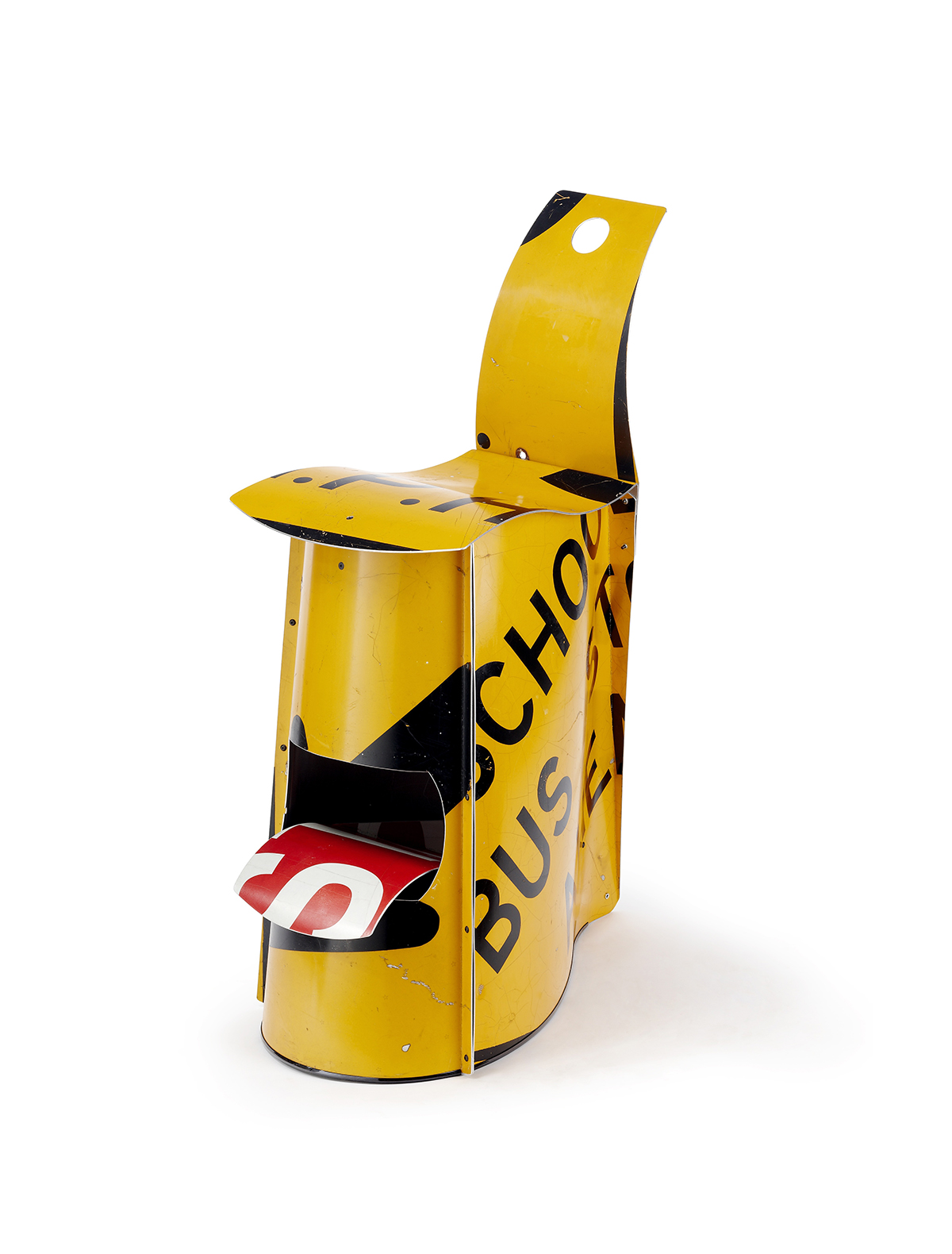 Trained as a goldsmith, Bally has been working with metal for over 35 years, crossing the boundaries between art, craft and design. While he started by making aluminum skateboards, nunchucks and throwing stars, “street sign” furniture is now the mainstay of his work, with celebrity clients including Robert Downey Jr., Michael Stipe and Jerry Seinfeld. 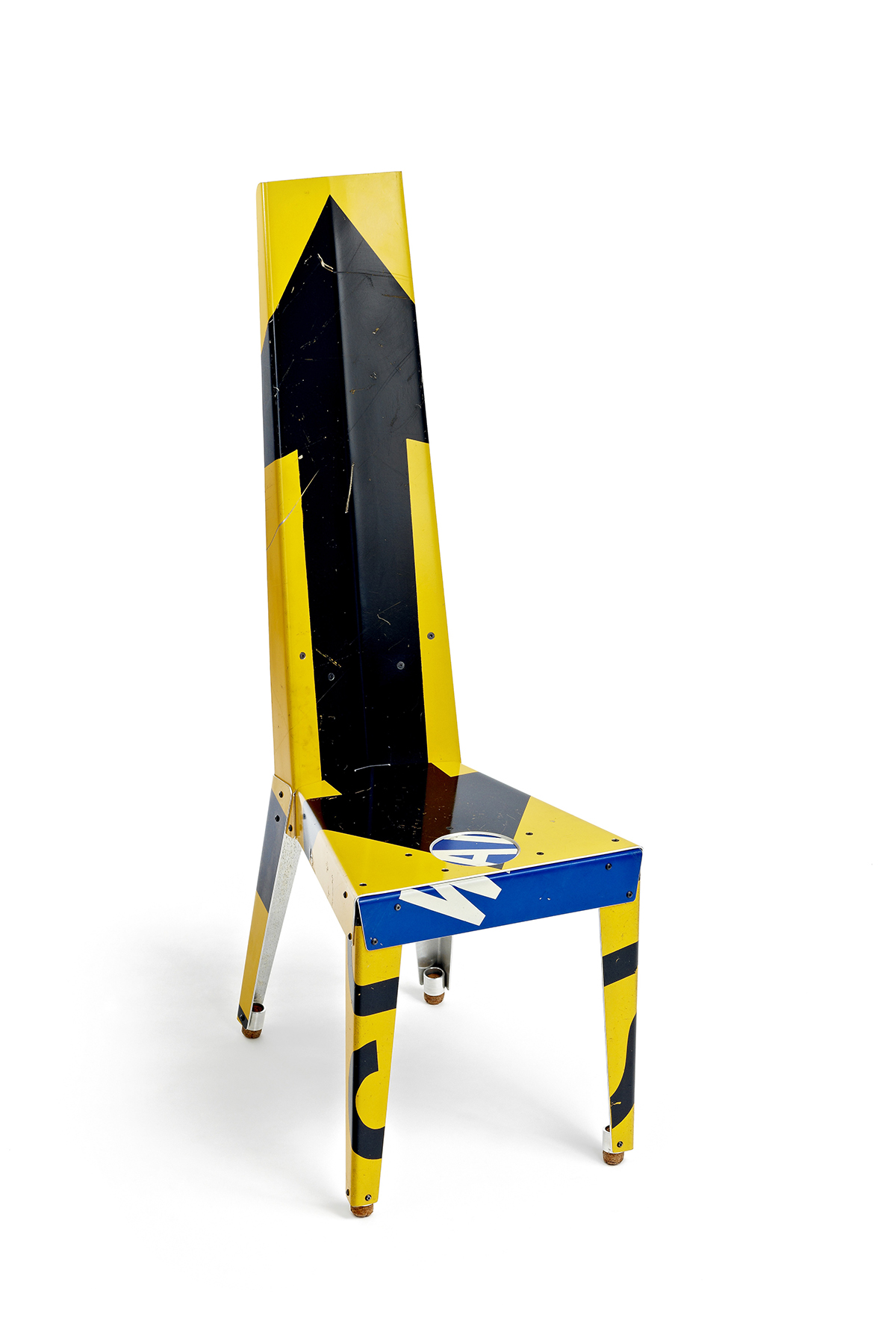 Bally has won a string of awards for his work and exhibited from Germany to Japan at venues including the New York Museum of Art & Design and London’s Victoria & Albert Museum. Meanwhile, his themes have spanned Hurricane Katrina, the prevalence of gun violence in the U.S., and recycling and the search for new materials. 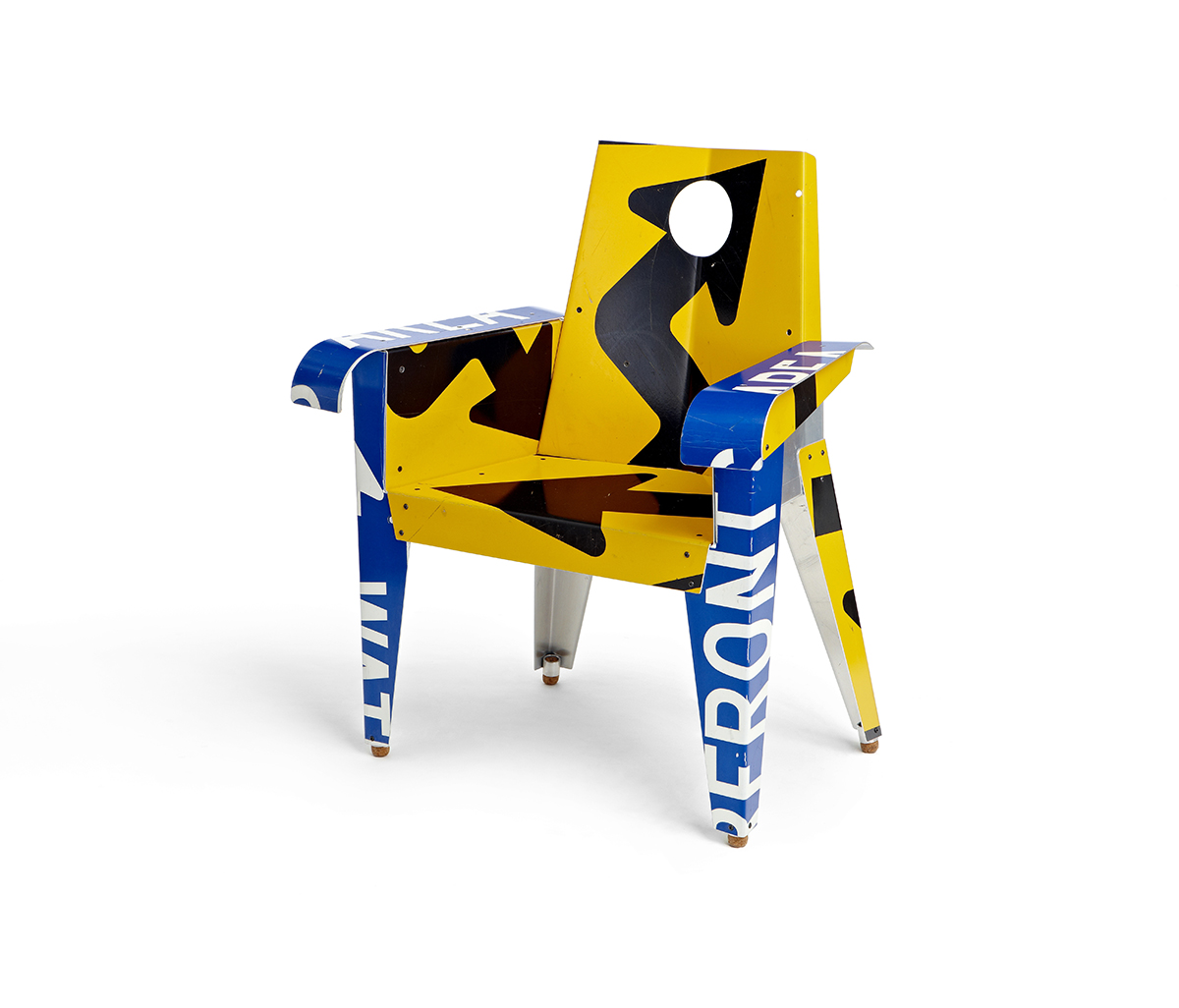 Indeed, if there’s one thing Bally hates, it’s waste. Every off-cut and piece of discarded material is put to use, whether it’s by making key fobs out of fragments of signs, or making coasters or bowls from larger pieces. And, Bally’s work comes in all shapes and sizes — he also makes clocks, mailboxes and tables out of signs. 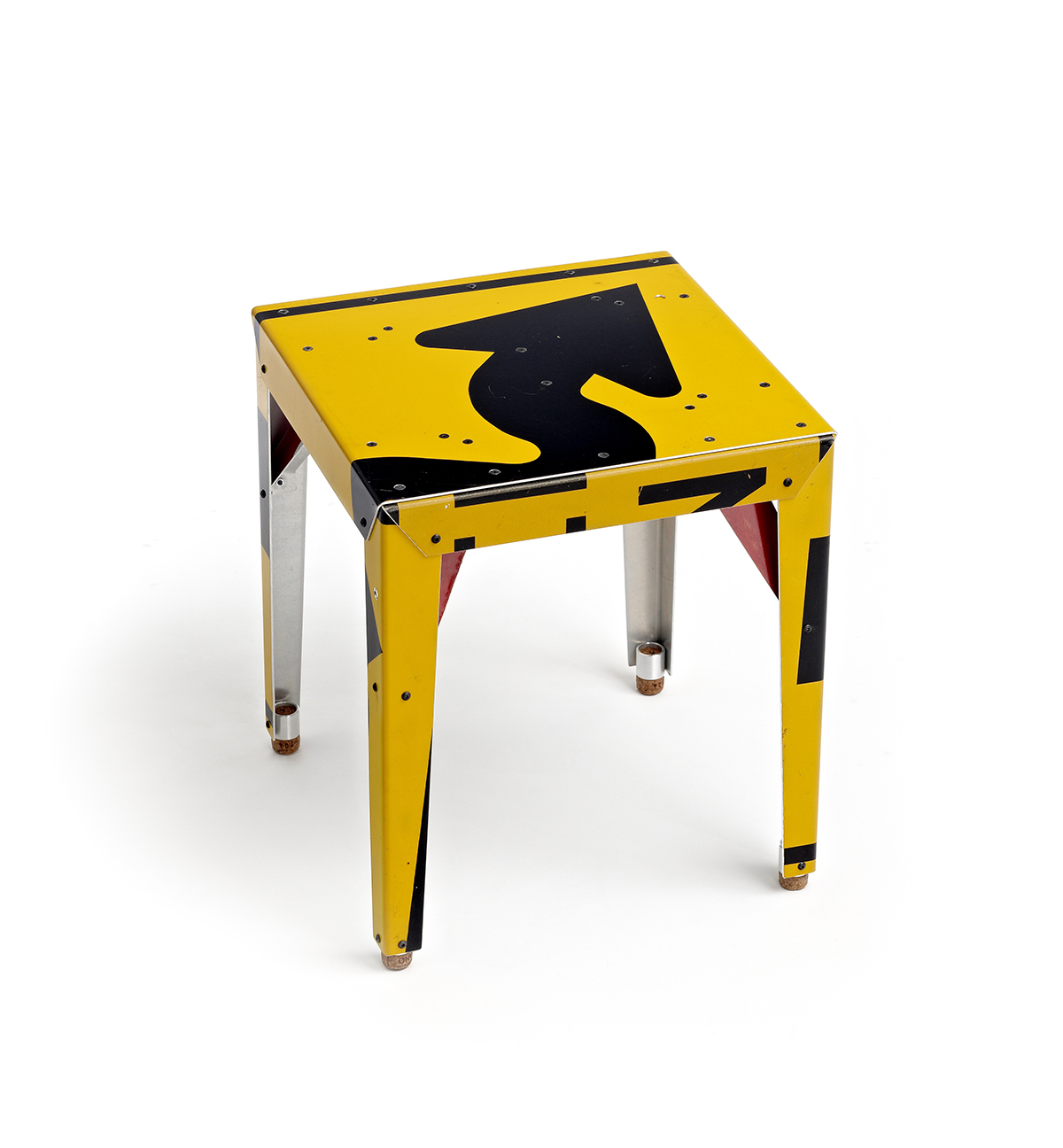 One of the biggest recycling projects he has undertaken was gathering a huge collection of corks, which he uses for the feet of his Transit Chairs. Stuck for material, he sent out an email to his mailing list in the late ’90s and, to his surprise, received some 15,000 corks in return. Fortunately, the material is decidedly useful and now provides the perfect grounding for the designer chairs. Check out Boris Bally’s amazing work at his website, borisbally.com.