Beauty in a Land of Waste: Junk Portraits by Vik Muniz

Whether it’s made out of chocolate or garbage, there’s more to Vik Muniz’s artwork than meets the eye…

If you think that Vik Muniz’s work looks like it stinks, then you’d be mistaken; while the artist works in garbage, he trades in photographs. Indeed, for the portraits seen in these pictures, Muniz collected junk from Jardim Gramacho, the world’s largest dump, found on the outskirts of Rio de Janeiro.

To make the pieces, Muniz collaborated with the local catadores, the people who make their living from picking over and recycling the rubbish that fills the gigantic dump. Muniz’s original plan had been to paint the workers with garbage, but upon working with them, the project became a collaboration. After posing so that Muniz could sketch them, the catadores went on to help the artist to actually build the designs, filling them out with garbage. In several of the images, you can see that the models are wearing jackets with the word “catadores” printed across the chest.

One of the people he met was Tiao, the head of the Catadores Union, who loves to read and can’t stand to see books thrown out. He posed as Marat, originally by Jacques-Louis David (“The Death of Marat”), seen top. Above is a photograph of Magna, who fell on hard times after losing her job. However, she says she would rather work as a catadore than as a prostitute. The image below shows the artist comparing the original photo (seen above) with the design that it would inspire. 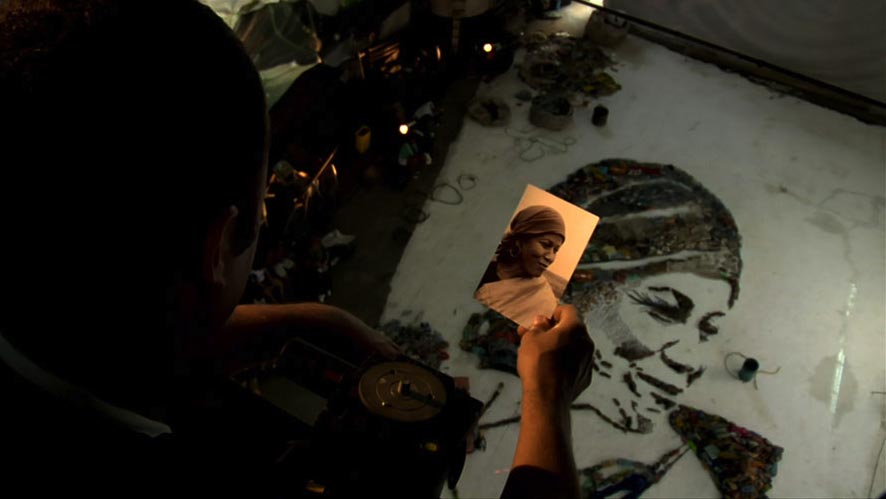 Other pickers say that however little they can manage, they take pride in reducing the level of waste in the dump and reducing its environmental impact.

View down onto Irma’s portrait on the floor. Photograph by Vik Muniz, courtesy of Vik Muniz Studio.

For Muniz, who describes himself as a “low-tech illusionist,” the paintings aren’t the finished product — instead, he photographs the decidedly temporary pieces, capturing them on film as “photographic delusions.” As an artist, he then trades in prints of the lost originals.

Frequently copying widely recognized images, there is a playfulness to Muniz’s work — the photographs, which are now all that remain, are copies of a transitory piece, which is itself a copy of a mass-produced image, taken from a centuries-old original.

Fabio and Tiao point down at Marat portrait (as seen top). Screengrab from Wasteland, courtesy of Vik Muniz Studio. While Muniz has lived in New York for the last 27 years, his origins are rather closer to Rio — he was born in São Paulo in 1961, where his mother was a switchboard operator and his father was a bartender. He has previously donated the proceeds of charity auctions of his work to the Centro Espacial Rio de Janeiro, an arts organization for poor children and teenagers in the city. 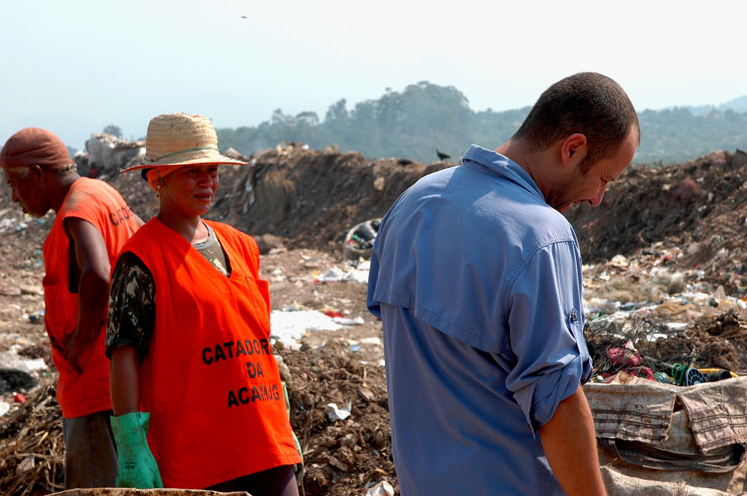 Vik at Jardim Gramacho beside Magna (who posed for “The Gipsy Magna”). Photograph by Camila Girandelli, courtesy of Vik Muniz Studio.

Muniz’s taste for temporary art began early in his career when he started photographing his pieces, before the photographs eventually replaced the three-dimensional originals.

Then came a breakthrough when, after a time spent traveling in Europe, Muniz returned to New York, almost penniless. What he did have was a camera and a piece of plasticine. But, only one piece. So, after making a sculpture, he photographed it and then destroyed it, before repeating the process 51 times. The result was his 1992 solo show, “Individuals,” in which he displayed the photographs he had taken next to pedestals, with each pedestal symbolizing the destroyed sculpture that it might have held.

Suelem looks down an alley. Screengrab from Wasteland, courtesy of Vik Muniz Studio.

Writing in “Reflex: A Vik Muniz Primer,” Muniz said, “The images of the sculptures are idealized objects. Seen from the perfect vantage, they offer no clues as to scale, material or weight. Their flatness leaves room for myriad interpretations; their ambiguity renders them part of anyone’s experience. They have become mental objects.” Whether he’s working with junk or rebuilding a da Vinci, Muniz’s work is all about recycling!