Ten Motorcycles Made from Recycled Objects

Motorbikes come in all shapes and sizes, but these 10 incredible green vehicles are made out of recycled parts! Time to hit the road! 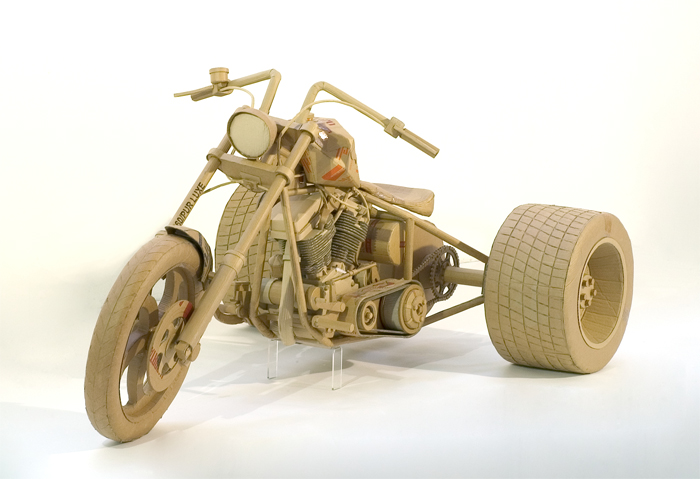 When thinking of green modes of transport, the mind doesn’t immediately turn to motorcycles. Indeed, the essence of power-hungry road hogs couldn’t be much further from the environmentally responsible ideal. However, these nine bikes (and one trike) all have something in common: they’re made from recycled parts! 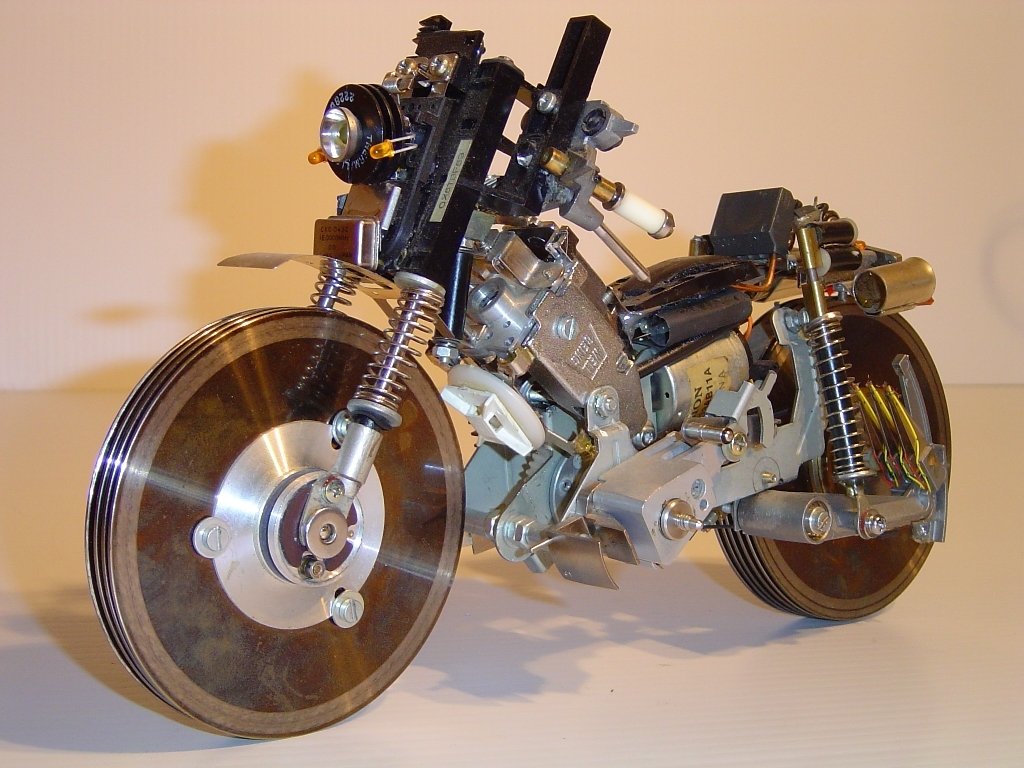 Bolted together and with hard disk drives for wheels, the aptly named Champion isn’t likely to speed away from you, whatever it looks like! The bike is actually entirely made from recycled electronic parts, most of which are sourced from computers. Artist Alex Manigold, who describes himself as an “archaeologist of the future,” hopes that his sculptures will spread the message that electronics should be disposed of responsibly or be recycled. Coming in at the smallest bike on the list, you can’t say greener than that! 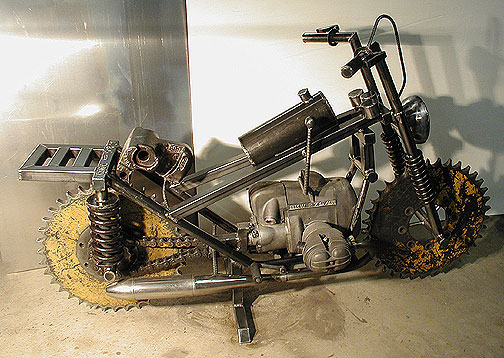 With an absolute guarantee of zero emissions and 100% recycled, this motorcycle, made by Bruce Gray, is amongst the greenest bikes that you can buy on this list. However, as a found object metal sculpture, it has a rather unfair advantage; though it incorporates a BMW R75/5 engine, it isn’t going to move an inch under its own steam. The wheels are made from two massive gears, which, with their gigantic teeth, are not going very far even if they were hooked up to an engine. In fact there is an engine, but it isn’t hooked up to anything. It’s a fine looking bike, though! 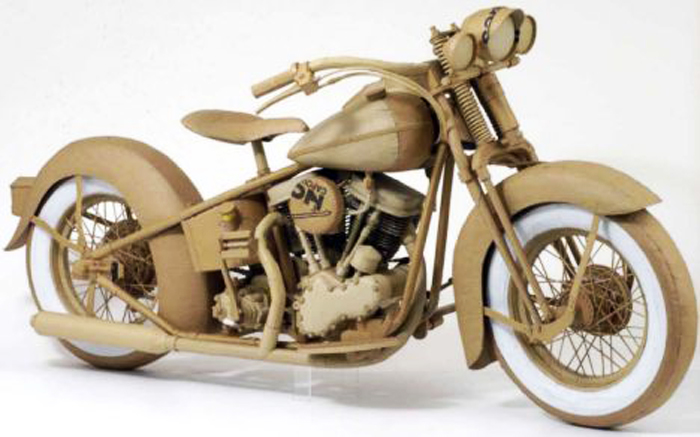 These bad boys aren’t quite as mean as they look — in fact they’re works of art made out of recycled cardboard. Nevertheless, exquisitely realized by sculptor Chris Gilmour, they brilliantly convey the awesome power of the originals. Gilmour is an artist who specializes in making “translations from life” and takes pride in using everyday materials to immortalize the minute details of daily life. In fact, these cardboard road hogs almost look more impressive than the originals! 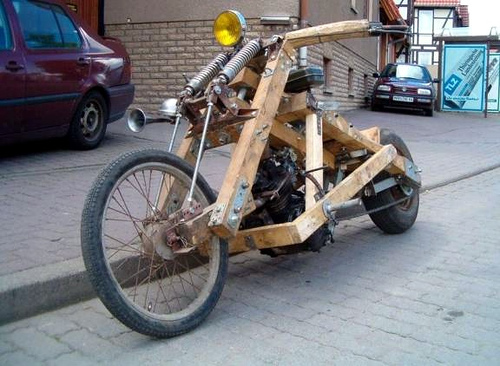 Next on the list is this oddity, which genuinely is a monster. Can it really be a functioning, roadworthy vehicle? Decked out with a working engine, mirrors and a horn, the answer, alarmingly, seems to be, yes, FrankenBike is capable of hitting the road. Then again, mean machine or not, it’s still a motorcycle made out of reclaimed lumber. If you hit something while riding this thing you should expect some nasty splinters, or failing that, for your bike to split in half. So, the lesson is, don’t go too fast or your bike might begin to break up. 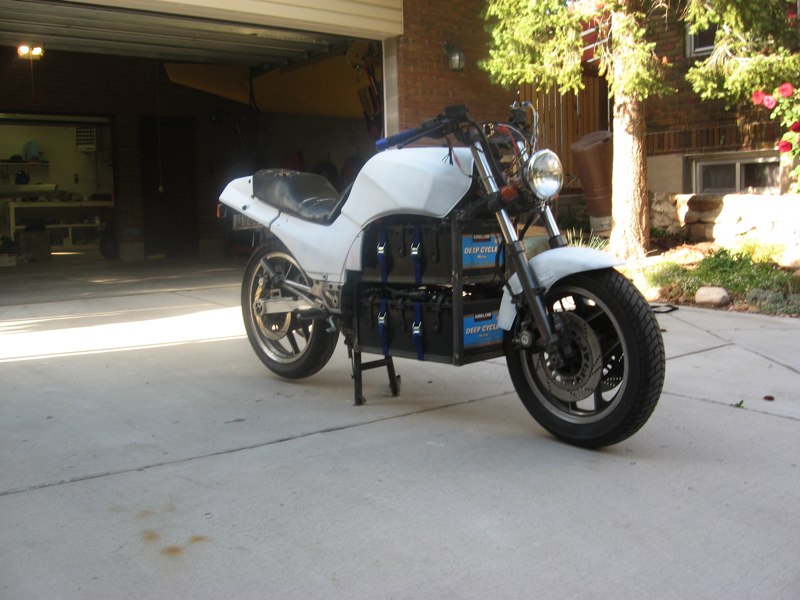 The El Ninja is one wacky racer. Built by Zero Emission Vehicles of Utah, this custom-built bike not only uses recycled parts, but also runs on electricity, producing, you guessed it, zero emissions. The bike can run for 50 miles on a single charge, at speeds of up to 52 mph, and weighs in at 530 pounds. And all this was built on a frame that cost $500 on eBay. 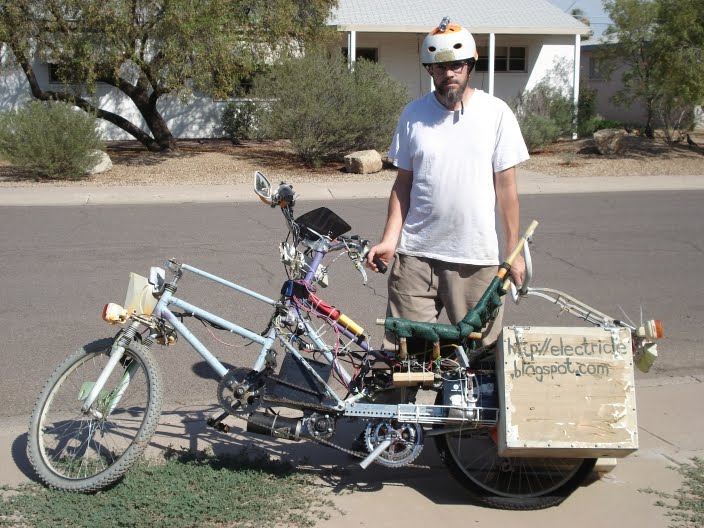 While it might not be a mean American chopper, this electric-powered bike certainly is a gnarly low rider. In its favor, it is by some considerable way the greenest working bike on this list, running on pedal power, assisted by an electric motor, and hand built with parts from several old bikes. As its maker, Michael Elliott, puts it, “I’ve got a pile of junk and I’m not afraid to use it.” He means it, you know. 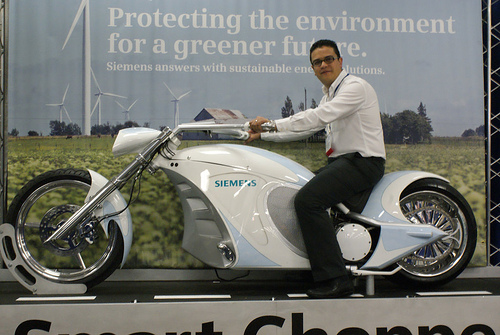 There are motorcycles and then there are choppers, and here, for the ethical Hell’s Angel (not illustrated), is the electric chopper. Siemens, an electrical engineering giant, isn’t generally in the business of manufacturing motorbikes. However, for the American Chopper show, the firm made an exception, and, with the help of Orange County Choppers, it looks like they’ve made a good job of it. This 650-pound beast can hit 60 mph in six seconds, and has a top speed of 100 mph. What’s more, the entire aluminum shell is recycled. Beat that for environmental responsibility. 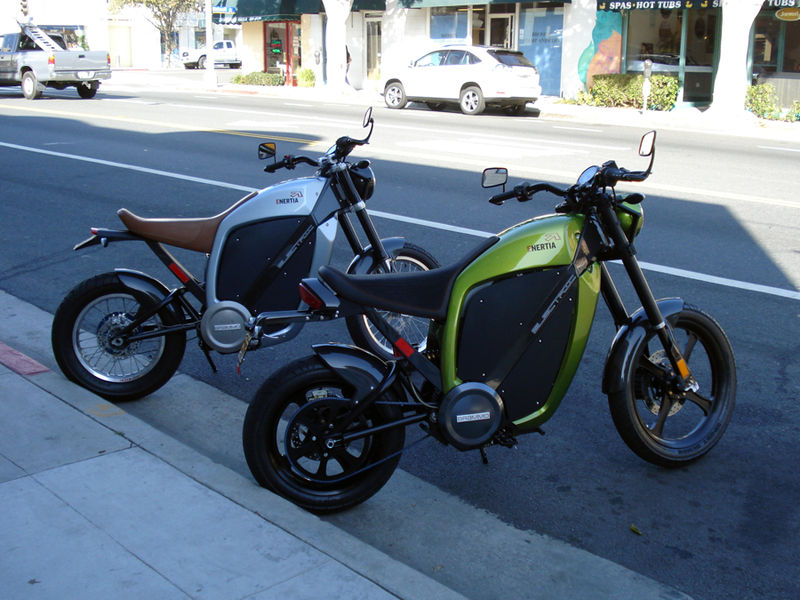 If you’re looking for an environmentally friendly way to travel, the Brammo Enertia powercycle is a green bike through and through. Made with clean energy and with recycled parts throughout, it’s difficult to get closer to zero emissions while riding on two wheels. Reaching top speeds of 60+ mph, the bike is a nifty urban mover, though the peculiar body shape might take some getting used to. But, if you do decide that you don’t like your Enertia powercycle, you can always recycle it (according to Brammo)!

From chic to chopper, this recycled 1994 Harley-Davidson Softail is a beast of a bike. With a gas engine, it might not be quite as green as some of the bikes on this list, but, as a gorgeous custom model, built from recycled parts, it definitely gets a look in. Based on no less than a 1994 stock Harley-Davidson engine, and using a Red Neck Engineering frame, this bike, built by Santiago Chopper, really is something of a looker!