Reused computer parts have never been so animated: Brenda Guyton’s found-object sculptures depict cute robot rabbits, snakes and dogs, giving us an insight into what the digital future might just look like.

Artist Brenda Guyton’s found-object sculptures, in the tradition of Robert Rauschenberg, contrast the organic with the inorganic — computer mice find themselves confronted by vacuum snakes and daisy wheel printers miraculously turn into iguanas. Viewers are instantly drawn to the recycled critters at once mechanical and cuddly. 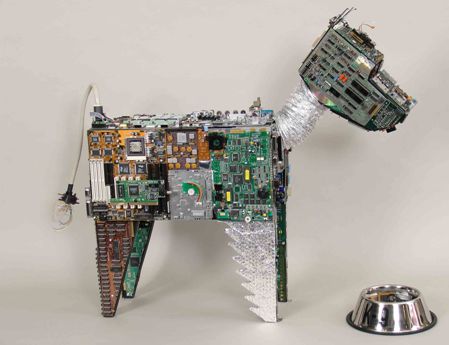 Commenting on how her twin passions for computers and animals intertwined and became fused, Guyton stated, “I am intensely interested in artificial intelligence and biological adaptations, and how those two forces might merge to create a strange and wondrous new world. My work is a reflection of those interests as well as a visual depiction of earlier interests — I grew up playing with lizards and insects in the desert of West Texas, and I’ve liked computers ever since I worked with the Duke University mainframe.” 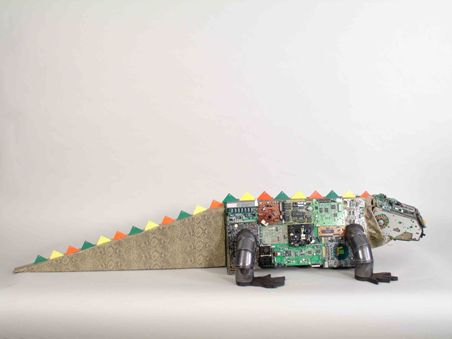 There is a purpose to it, too. Viewer involvement is not only wished for, but also terrifyingly anticipated: “My intent is to shift the viewer’s perspective. The figurative elements combine with the electronic parts to evoke images of the ‘future is now’ melding of biological creature with machine ‘life.’ Perhaps one day our very thoughts will be software, riding on an electric network of consciousness.”

She goes on to add, wryly, “Our reptilian friend has a ‘mouse’ lunch. He is rising from a rough terrain of computer power supplies.” Don’t miss the box made out of two Mac keyboards and some 5-1/4″ floppy disks. Each of Guyton’s electronic animal creations is a labor-intensive project and is challenging to implement. Her husband, Tom, helps with preparing the sculptures’ wooden structures, but the real key is, unsurprisingly, adopting an organized approach to garbage. Guyton keeps several bins in her garage-cum-studio, all brimming with meticulously labeled computer parts of various sizes and types.

A native of the Texan desert, Guyton did not pursue art as a career but originally focused on accounting. She holds a degree in accounting from the University of Texas of the Permian Basin and is currently the director of capital planning at the Southern Methodist University. Lucky for us, she makes sure to balance her studies and profession with art classes. From beginnings studying oil painting with David Leffel at the Art Students League of New York, and portrait painting with Daniel Greene and Gregg Kreutz, Guyton moved on to mixed media, collage and then sculpture. Since then, her works have been exhibited across the nation and have won many prizes.

Those captivated by Guyton’s sculptures can find more on her website, where you can also purchase them — most sculptures range from between $50 and $995. But, if you’d rather not shell out, why not get creative and turn your old desktop into your own stunning ode to the mechanical future. All images courtesy of Brenda Guyton Sources: 1, 2