Big, strong and seemingly unbreakable — shipping containers are a great place to start for a new style of building! 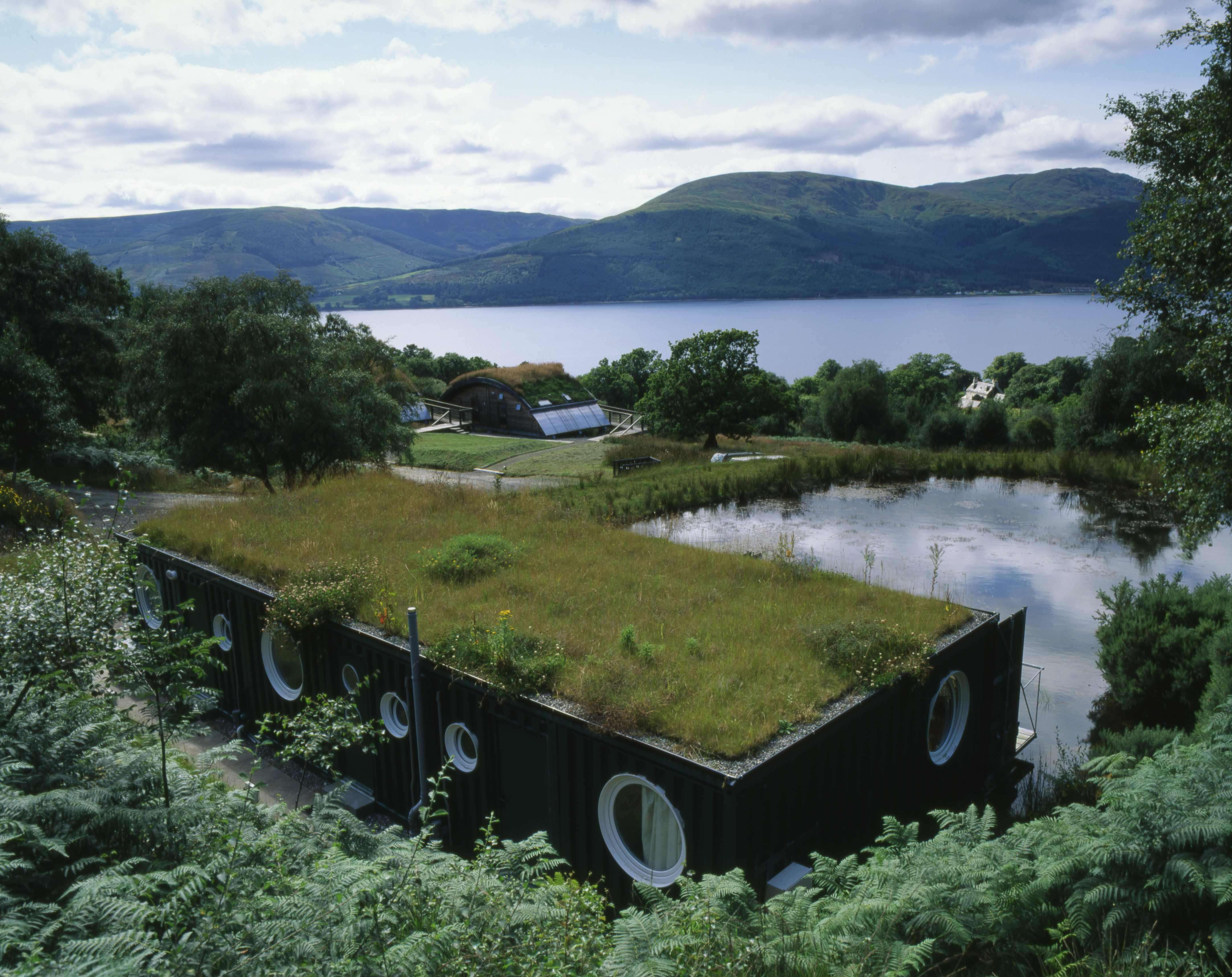 One of the wonders of the modern world is that you can stick something in a shipping container, send it off with thousands of other boxes, and see it land anywhere on earth. But, how do you get rid of shipping containers when you don’t want them anymore? They’re massive, sturdy and seemingly indestructible. One thing you can do is recycle them — and unlike toy building blocks, they actually make rather good houses! 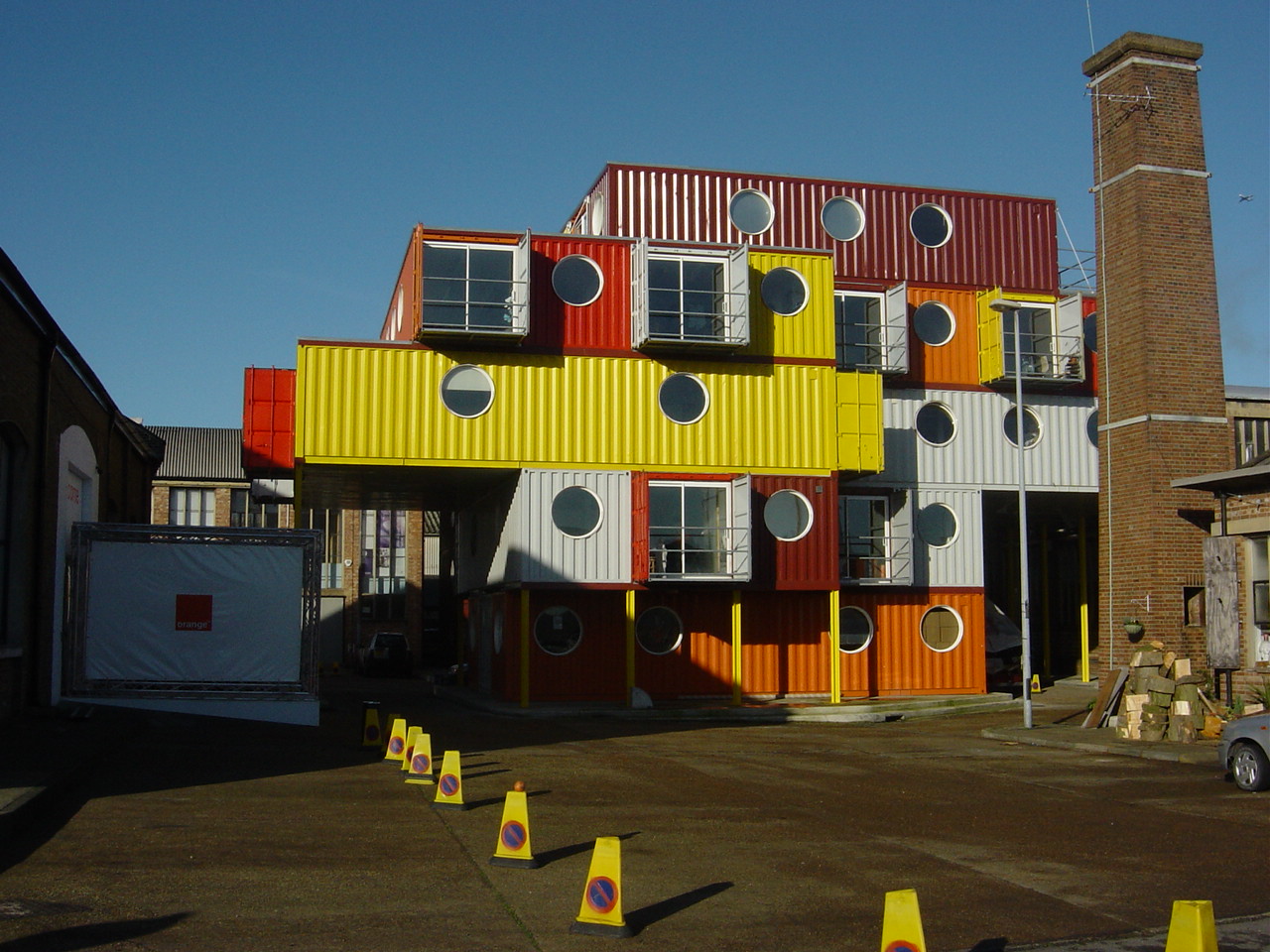 Container City started life as a three-story complex when it was built in 2001 — taking four days to install and five months to finish. However, the flexible residential and office space proved to be so popular that a fourth story was added, extending the project to a total of 20 containers, used over 15 properties. 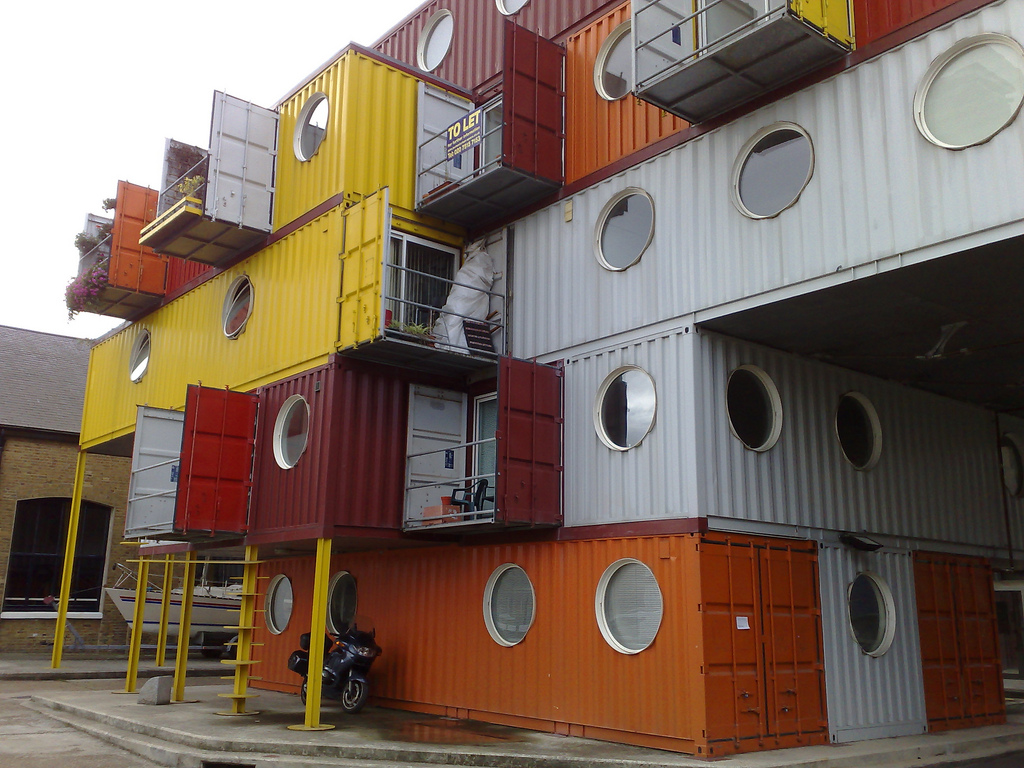 Over 80% of all the building materials used for the project were recycled, while this construction technique can halve the cost of projects in which it is used. 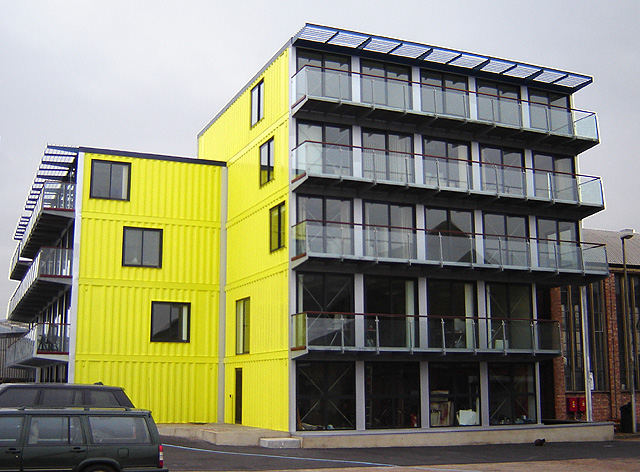 Urban Space Management, the team behind Container City, wasn’t satisfied with leaving the project at that. Container City II was built in 2002 (using 30 containers to build 22 units), while the Riverside Building, shown above, was added in 2005. Sitting on the Thames opposite the O2 (formerly known as the Millenium Dome) the building uses 73 containers to create 22 units over five floors. 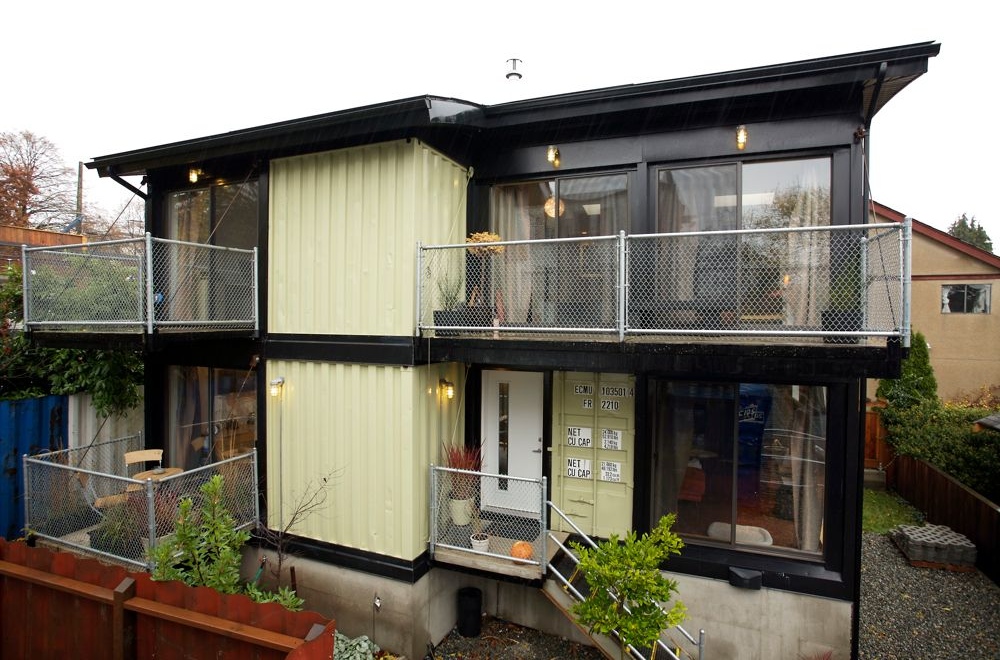 When Keith Dewey decided that he wanted to make affordable, designer living spaces to slot into the urban world, his mind hit on using containers as “architectural building blocks” to achieve an innovative “residustrial” style. In late 2006, he completed the Zigloo Domestique concept home, in which he lives with his wife and daughter, on the southern tip of Vancouver Island. 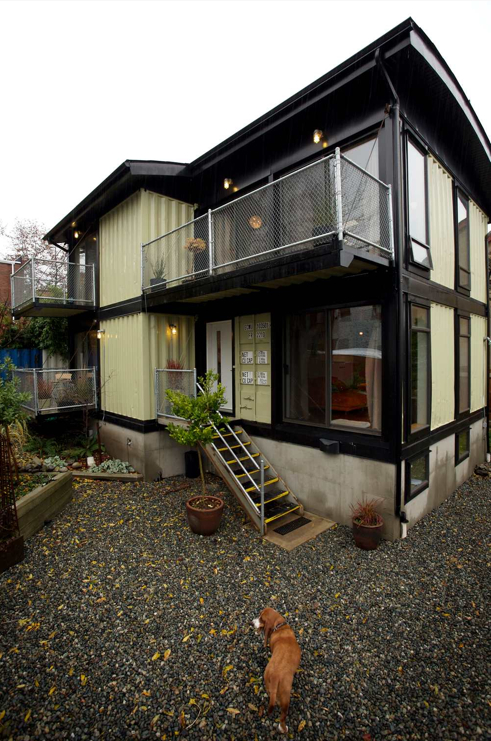 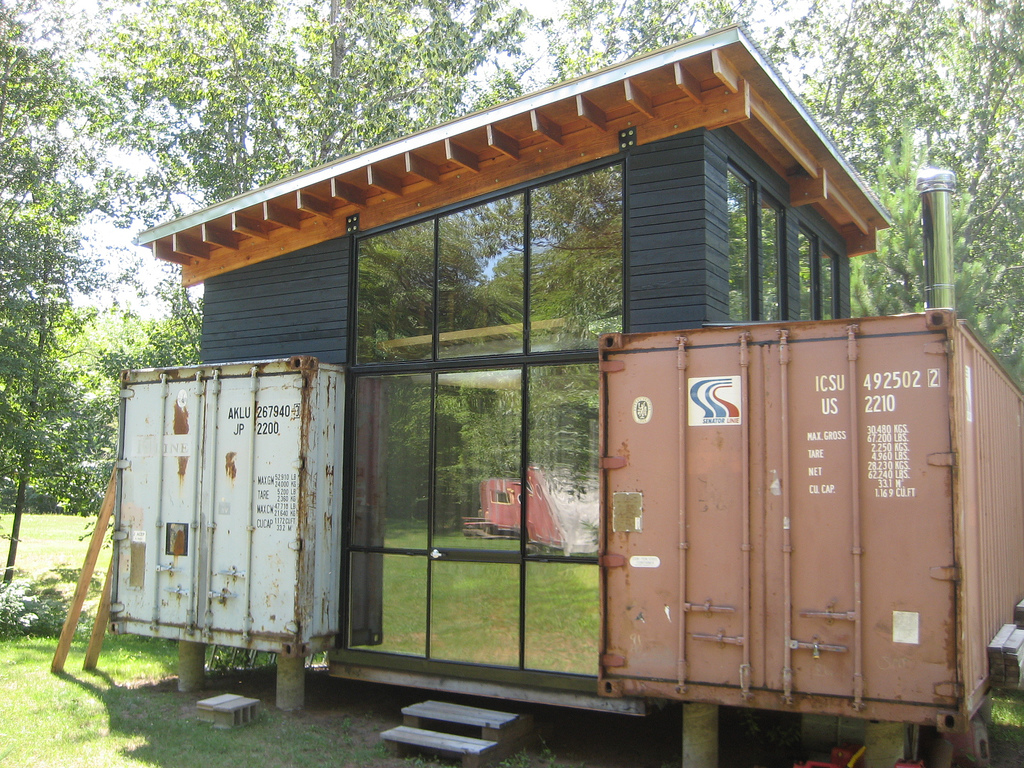 Paul Stankey and his wife Sara, brother Paul and sister-in-law Krista built this amazing cabin retreat in the Minnesota woods, near Holyoke, using only birch wood, two $800 container units and their bare hands. Due to the cabin’s remote location, it was constructed without access to electricity or running water, so, to make cement, water had to be pumped from a nearby creek and then trucked over. It looks like the trouble was worth it, though! 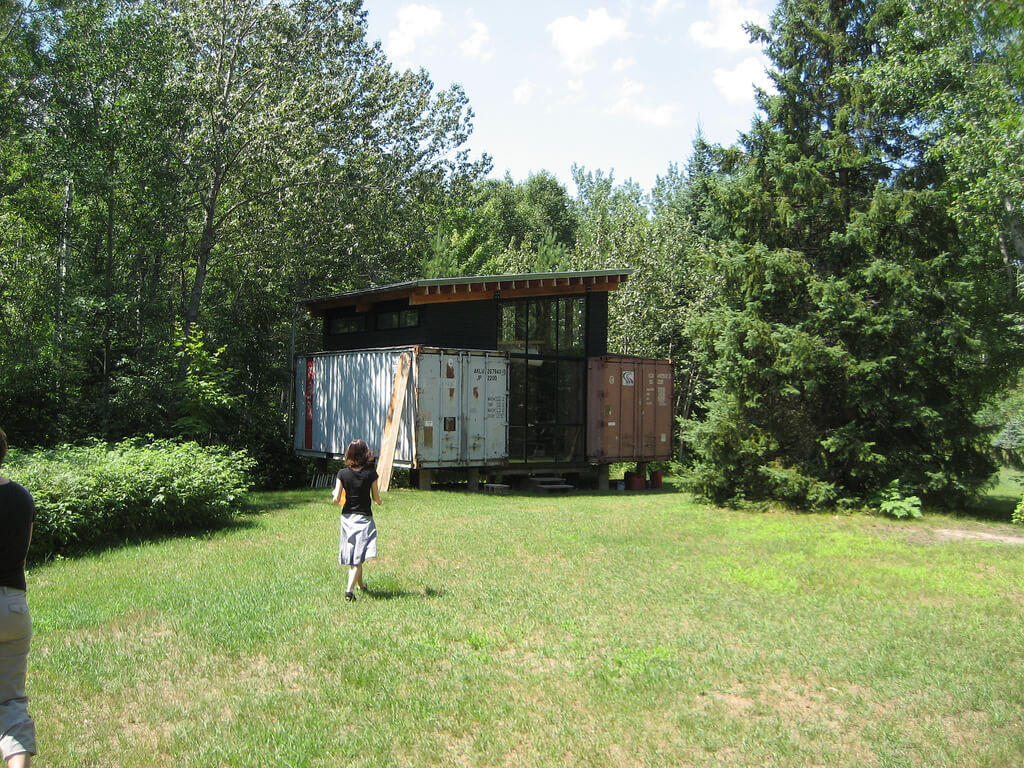 The cabin was such a success that Stankey started a new subsidiary of his Hive Mind firm, specializing in prefab shipping container living units that can be delivered to wherever they might be wanted. 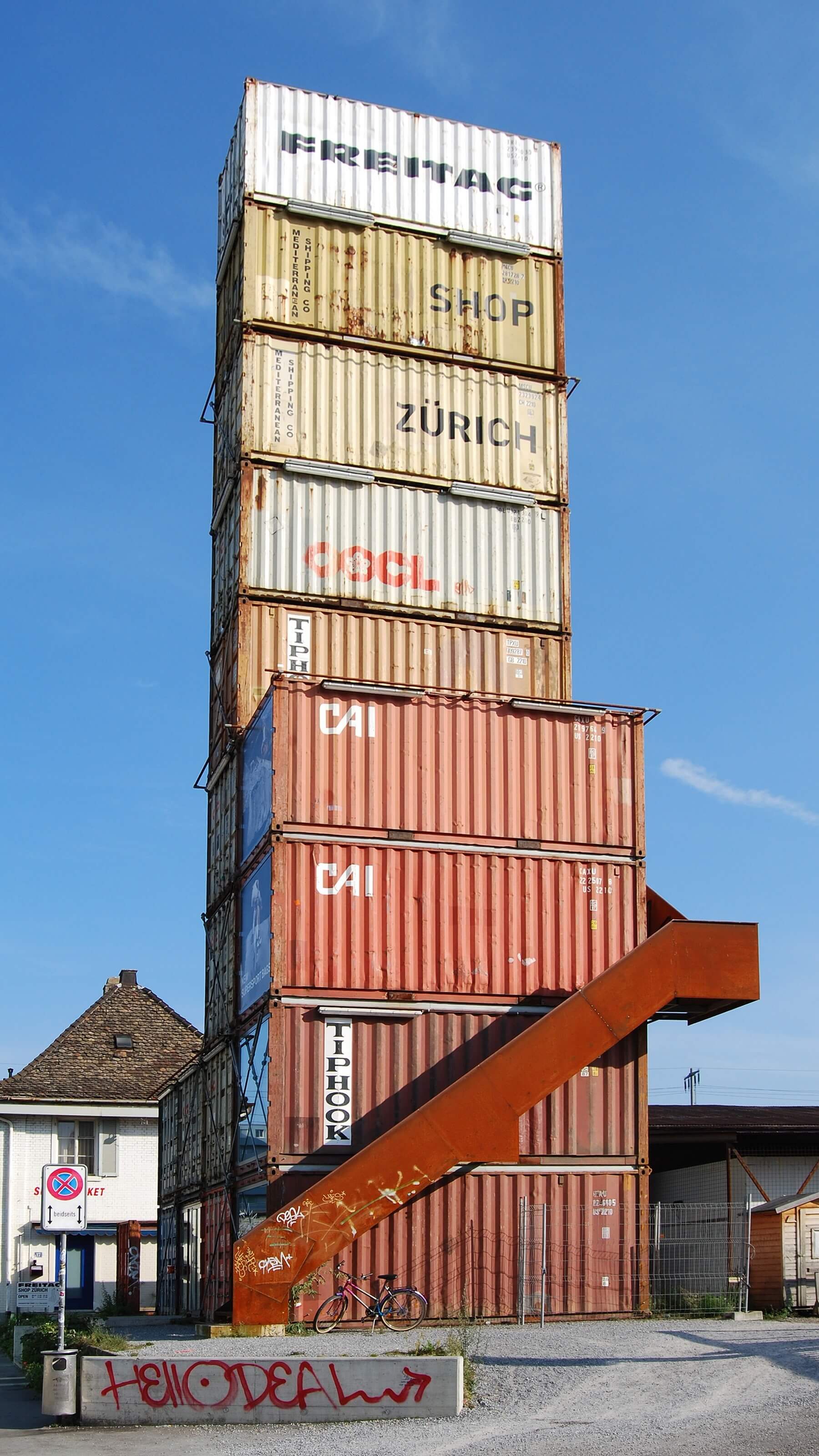 Zurich’s Freitag shop is one colossal shipping container building, including 17 containers and standing 85 feet (or nine containers) high. Sitting between railway tracks and an overpass, the tower overlooks the road that originally inspired the Freitag brothers to make messenger bags out of recycled truck tarpaulins in the early ’90s — which eventually made them famous. 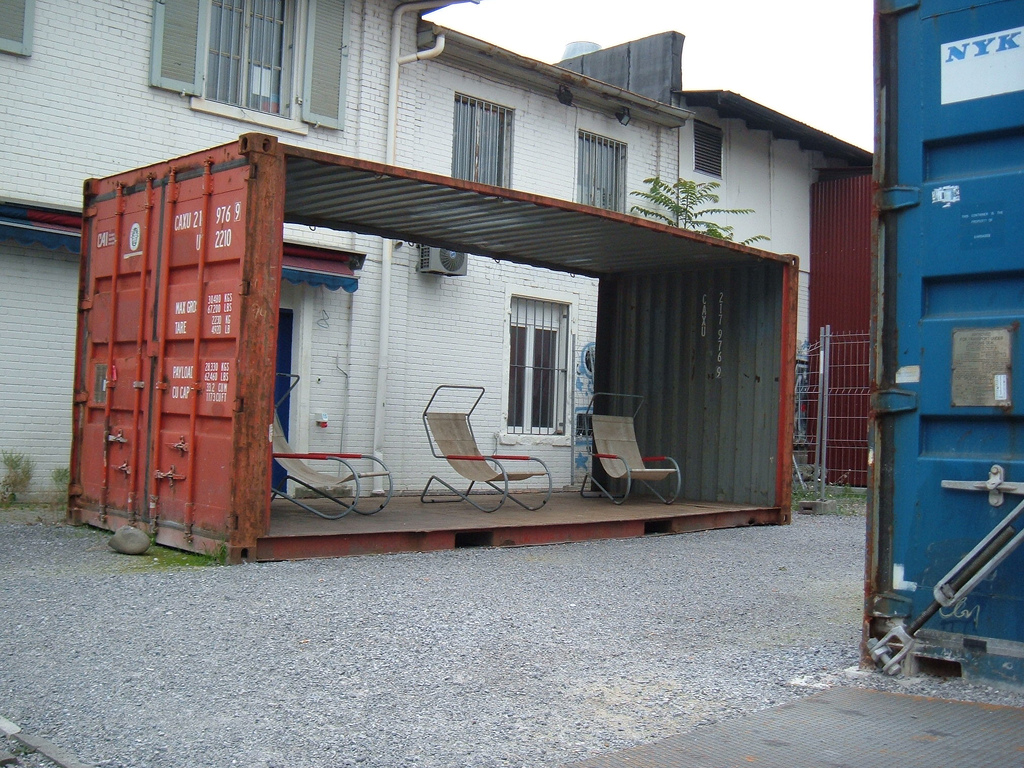 Outside the Freitag Shop. Photograph: daisybush

Built in May 2006, the shop features four levels of display space as well as a viewing platform at the top of the building. 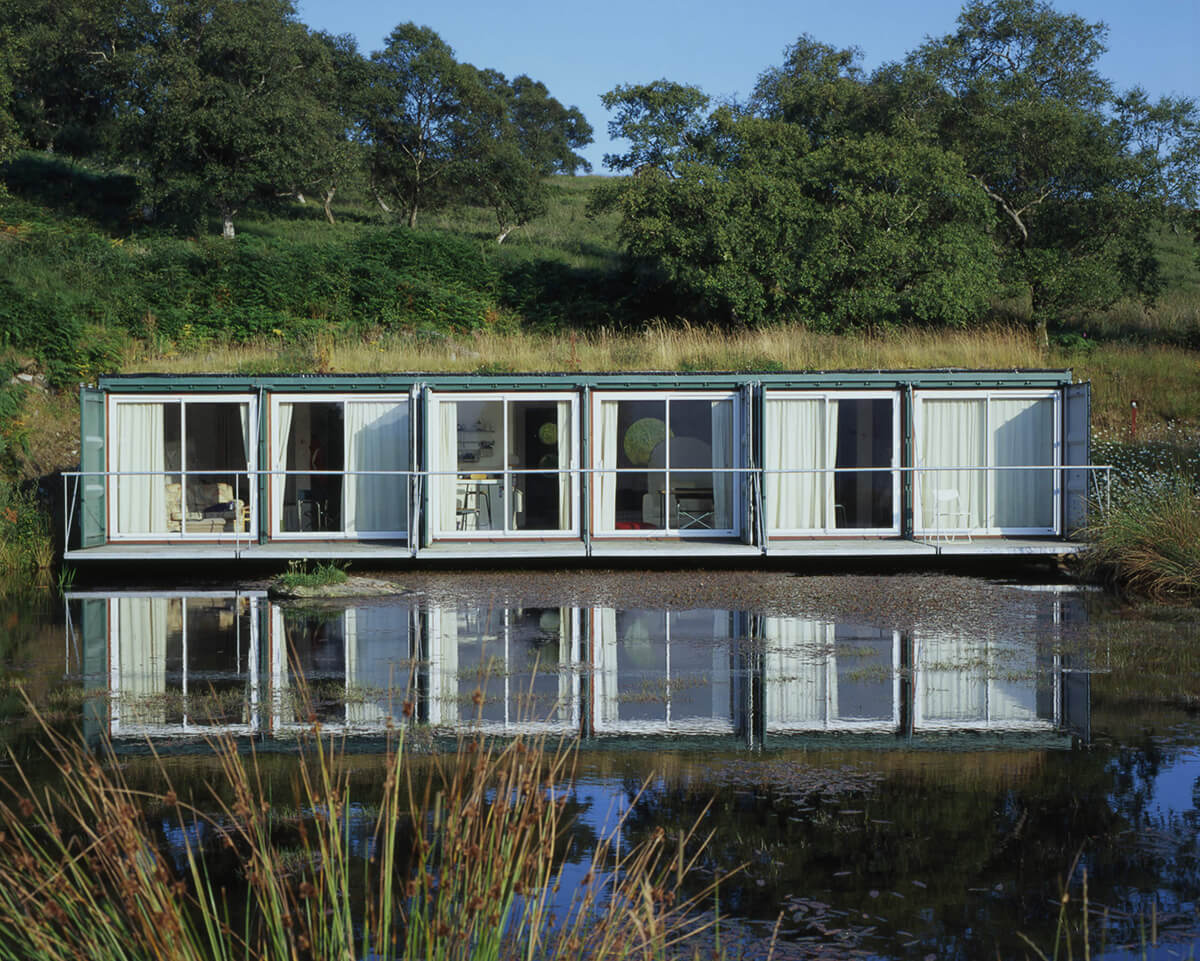 Talk about an amazing location for a shipping container home! The Rosneath-based arts center, Cove Park, overlooks the stunning Loch Long in Scotland, and, since 2002, has had a set of container buildings, known as The Cubes. The first three Cubes housed accommodation units, while another two sets of three were built in 2006, as additional residential and studio units. 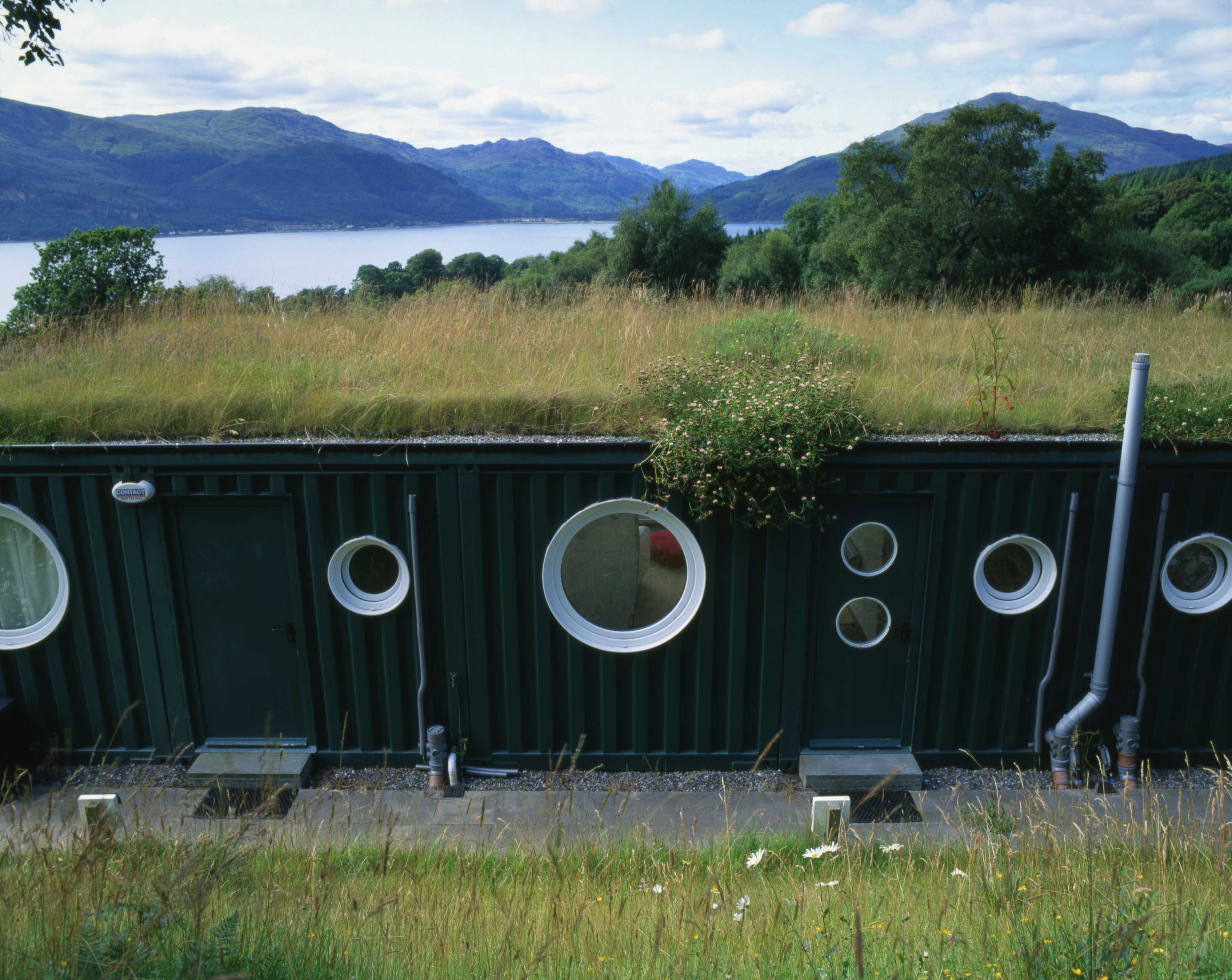 The buildings were designed by Urban Space Management, a firm that didn’t just build the Cove Park Cubes, but developed a whole city of containers in London as seen above! 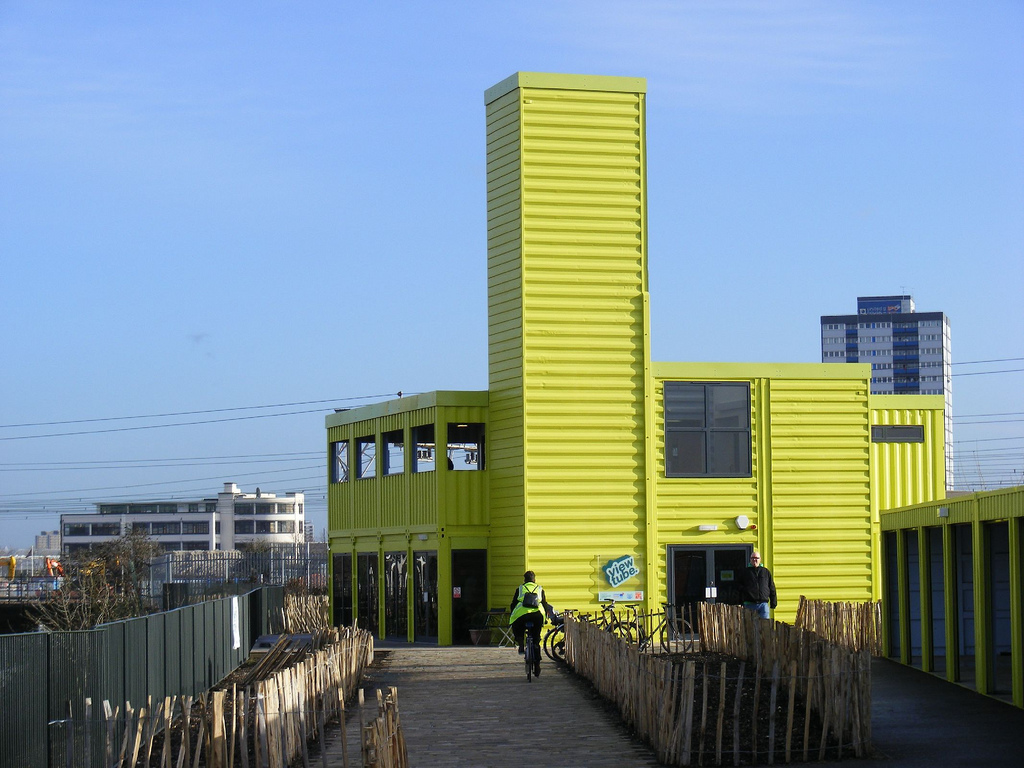 The View Tube is a community venue close to London’s Olympic Park in the East End, which houses a café as well as arts and education spaces, and offers a panoramic view over the Stratford City and the Olympic venue. 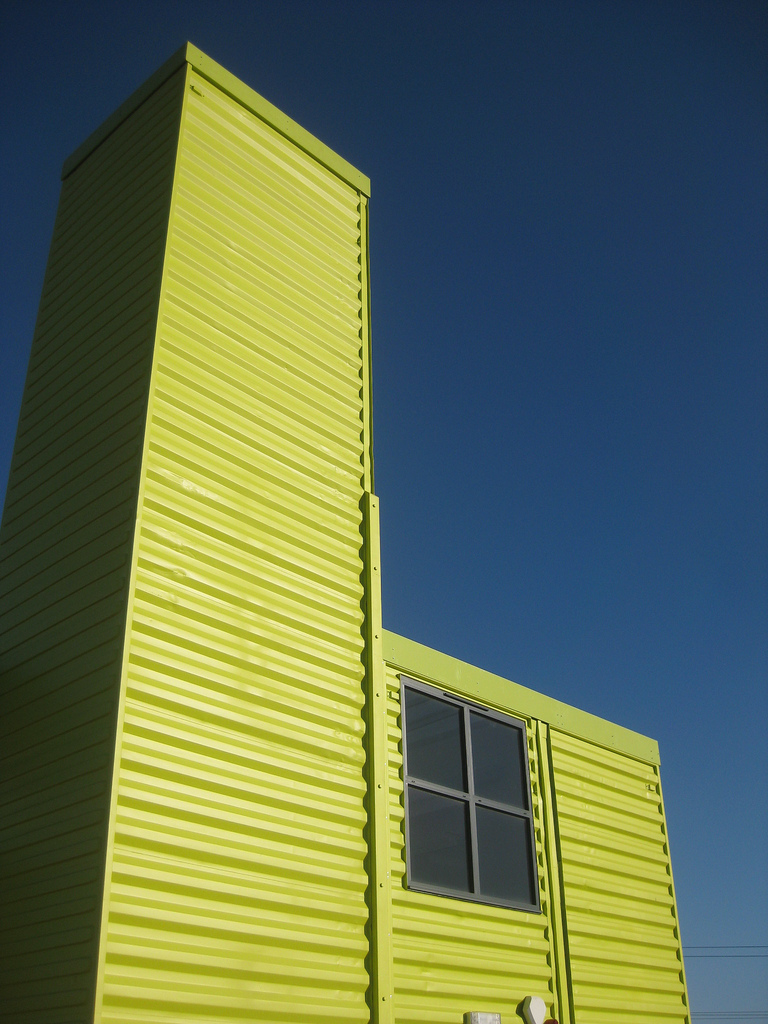 While it is currently in the middle of a large building site, it is apparently the first venue to be completely finished for the 2012 Olympics. 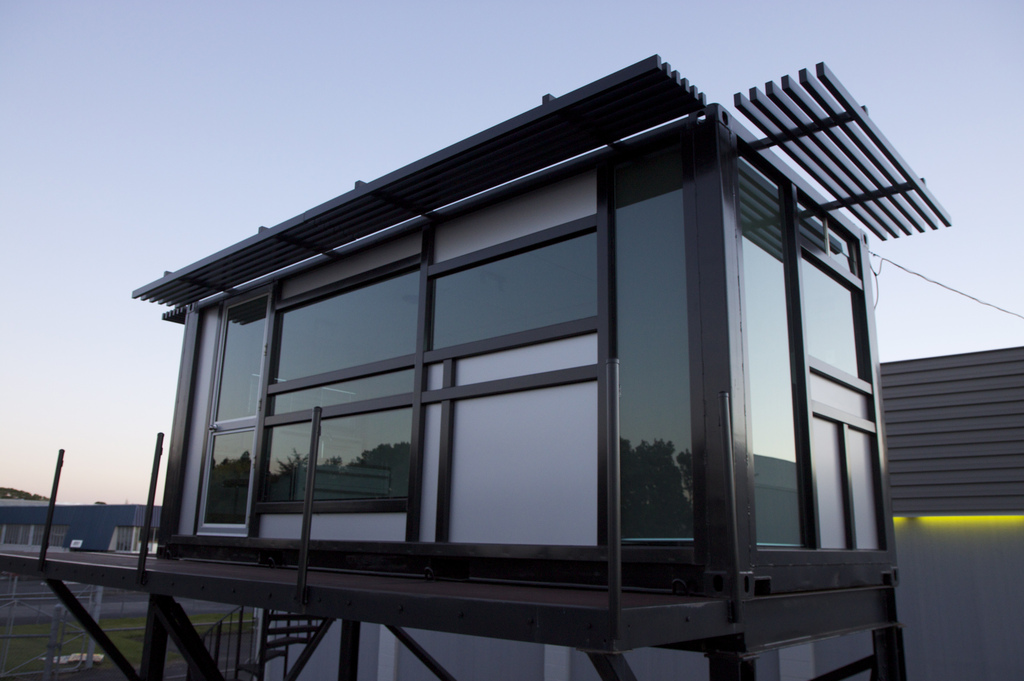 Built by One Cool Habitat, this prefab container design is, well, one cool habitat. The units are built with an open layout, so you can do whatever you want with them and they are light enough that they can be shipped anywhere in the world. As the company puts it, it’s “your space, your way.” 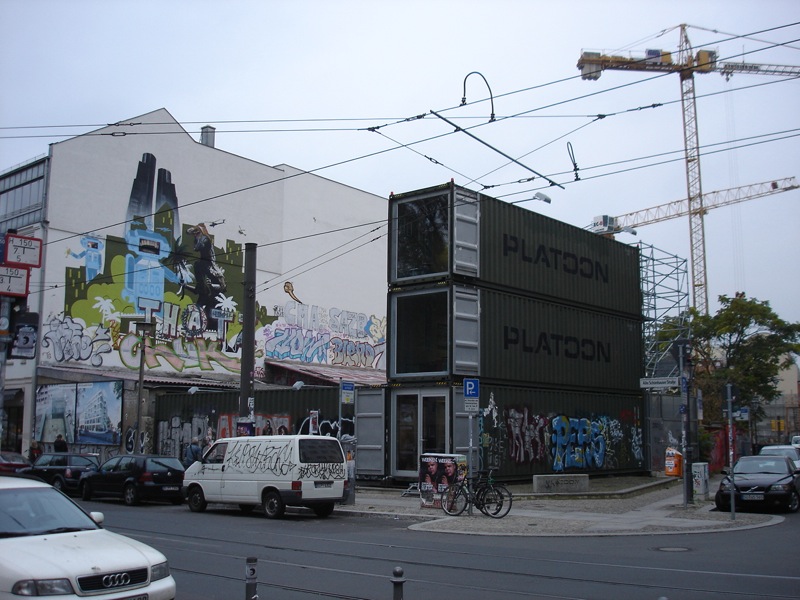 Platoon’s shipping container Berlin base of operations consists of a three-story tower containing a studio/office overlooking a swimming pool and performance space, which has played host to such events as a Foosball tournament. 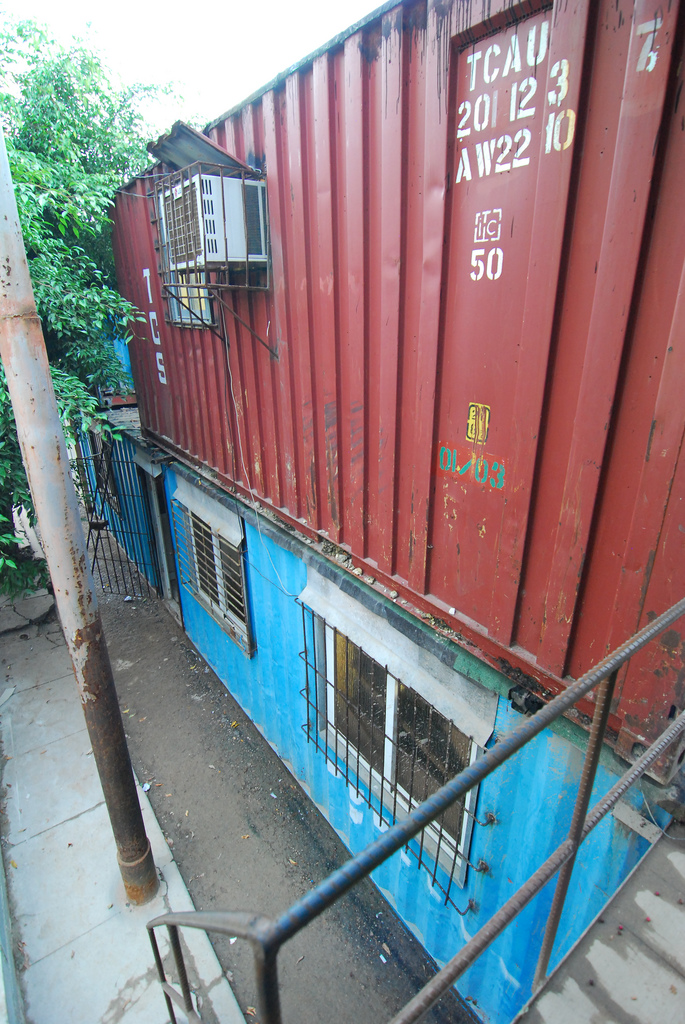 Building materials are hard to come by in Cuba’s capital, which is perhaps why this two-story building has been constructed from old containers. With a staircase running to the second story, these are probably two separate properties and have been fitted out with wire mesh windows and cooling fans. This particular house is just one of many, in a long row, found near a building site in Havana’s city center. 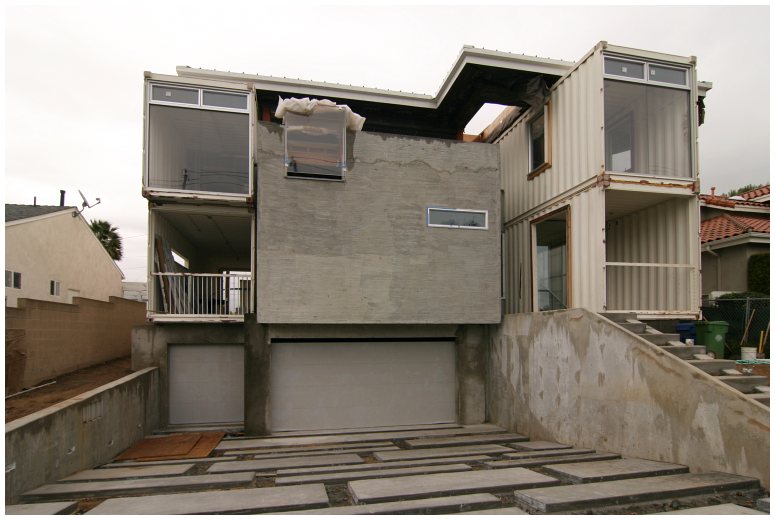 Designed by Peter DeMaria, the Redondo Beach House was built in 2006 using eight recycled containers. As well as winning several awards, it is reported to be the first two-story container house in the U.S. to abide by the Uniform Building Code. DeMaria describes the concept behind the design as being the idea of “architecture as a product.”