Jason Mecier’s amazing 3D assemblage collages bring to life the celebrities of today, and of yesteryear — in recycled junk! 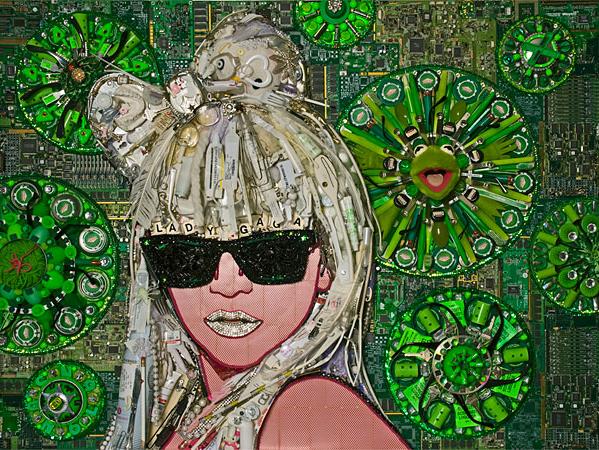 Jason Mecier’s 3D mosaics don’t just illustrate celebrities in recycled junk — incredibly, many of them are actually made from items donated by the celebrities themselves! 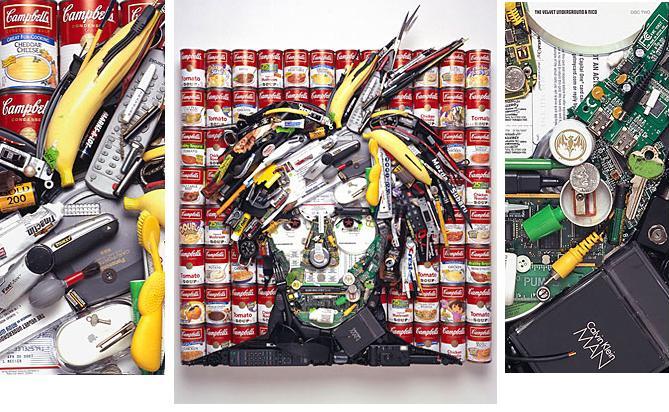 Each of Mecier’s pieces is intensely personal to its subject. The discarded objects and unwanted junk he receives have included moldy slippers, anti-itch creams and dirty laundry. Previously, he has worked in materials ranging from pills to junk food, but more routinely he works with items such as broken sunglasses, gum wrappers, jewelry and shoes. 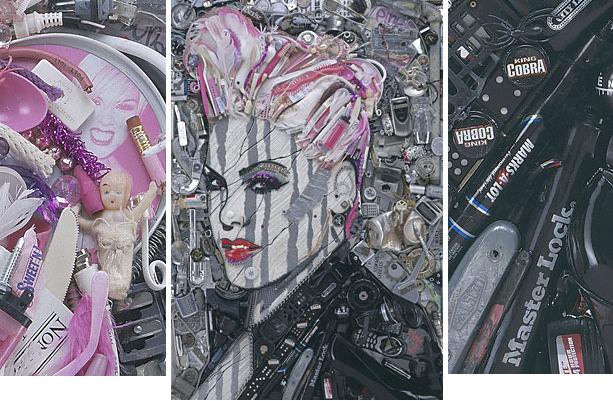 Mecier’s mission is to capture the public image of his subjects and in a sense, his portraits are literally constructed from the recycled detritus of the lives of the celebrities he portrays. The use of donated items transforms the process into a two-way work of communication in which the image is implicitly permitted, encouraged and nurtured by its subject. 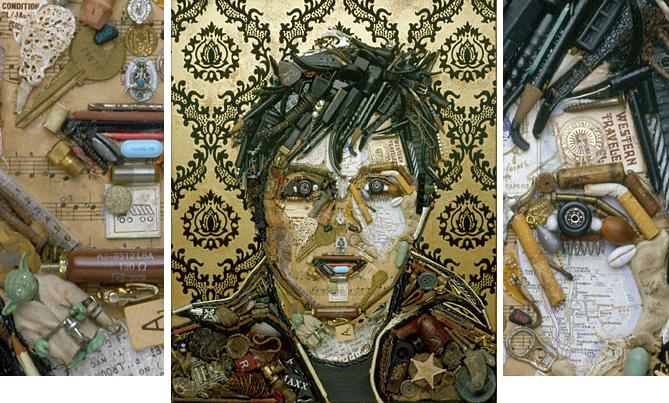 Each image takes at least 50 hours to produce, though some take much longer, including the GaGa and Farah Fawcett portraits (top and below, respectively), which each took two months and hundreds of hours of work to complete. 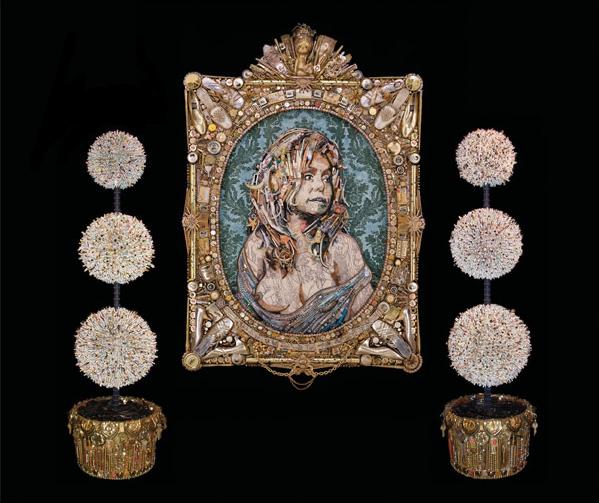 Whatever Happened to Farah? Image used by permission of Jason Mecier.

The artist sources his materials from friends, family and fans, and, of course, his subjects. He is a particularly avid collector of secondhand toothbrushes and refrigerator magnets, as well as a host of other things. 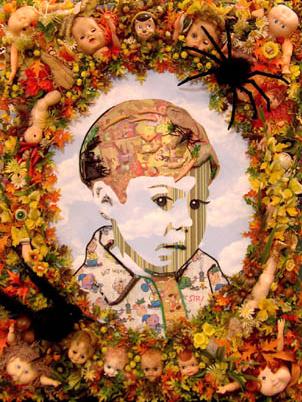 Mecier explained to Dangerous Minds: “There’s something about the process and having a connection or brief relationship with the subject that thrills me. The idea of using their personal belongings as art supplies makes the art piece so personal and one of a kind.” 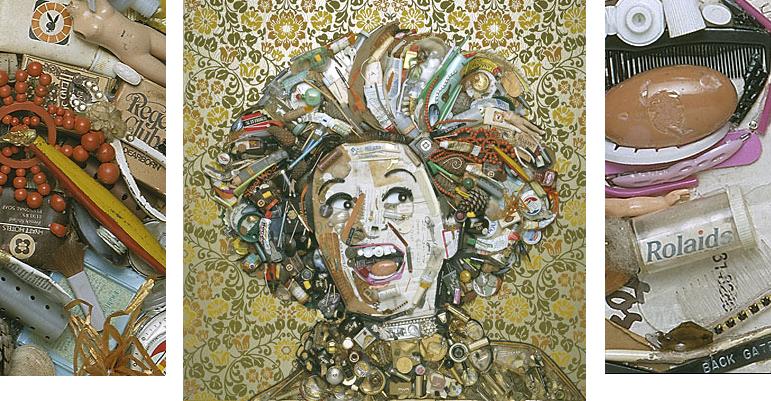 As a child, Mecier would clip pictures of his favorite television programs from the TV guide, collecting them as a scrapbook. Later, when he was in high school, he began to do pencil drawings of record covers, ranging from the Rolling Stones to Olivia Newton-John and Pat Benatar, before later creating psychedelic collages using Charlie’s Angels trading cards and pictures of Florence Henderson from the Wesson Oil ads. 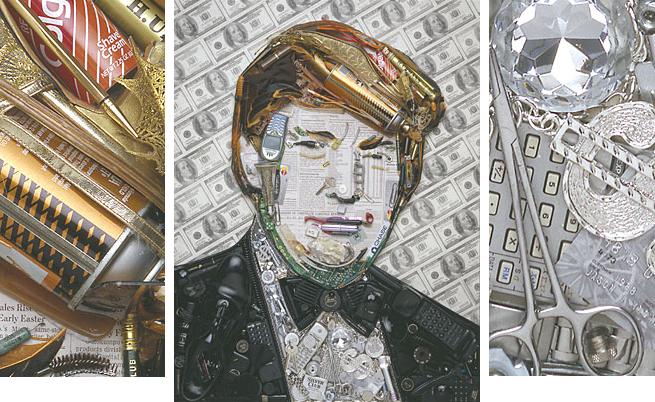 From here, he began creating images out of beans and noodles — and the path to his junk portraits is clear! Mecier, who has no formal art training, has now been working with assemblage mosaics for more than 15 years. If you ever made a pasta painting as a child, you can imagine just how much work he puts into his paintings to make such amazing likenesses.

Mecier describes his grandmother, Anita Tollefson, as his greatest mentor. While she would work on paintings, sculptures, collages and stained glass pieces when he was a child, she would set him projects to work on. He recalls: “One of my earliest pieces, is a mosaic made from beans, noodles, rocks and cut bamboo sticks glued on a piece of wood… [Anita] would rather paint on the back of her cigarette cartons than buy a canvas. I learned from her that I can make art out of anything I want to, and that there are no rules.” 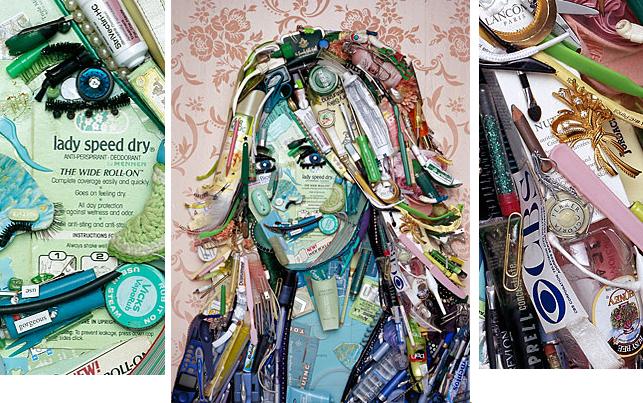 Describing his work, Mecier explains: “For years, I have collected a vast and varied arsenal of trash and trinkets that find their way into my art. I enjoy trying to match the perfect items, colors and themes with the essence of each unique subject. Some fun examples include: Rosie O’Donnell made out of junk food, Snoop Dogg made out of marijuana, Sigmund Freud made out of pills. Sometimes the name suggests the medium. Guess what materials I used to make the following portraits: Condoleezza Rice, Salt-N-Peppa, Kevin Bacon and Dog the Bounty Hunter [that would be rice, salt and pepper, bacon and dog food, respectively].” 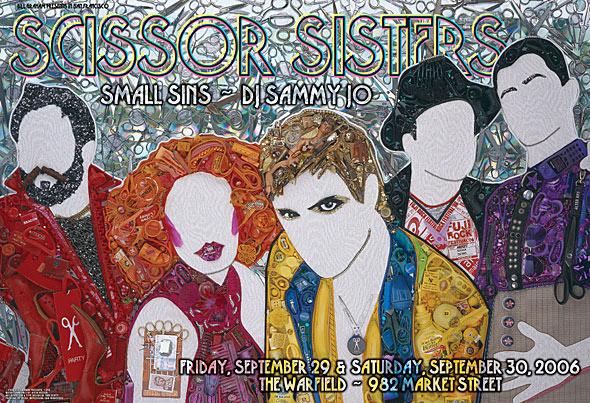 “Most people send me anywhere from a shoebox to a trash bag full of things to incorporate into their portraits,” Mecier says. “[Comedian] Phyllis Diller sends me a small box every few months filled with odd things like pinecones, dried up paints, jewelry, eyeglasses and anti-itch ointments. [Model, actress and singer] Barbi Benton sent me an entire U-Haul full of very personal keepsakes like prom queen crowns, platform shoes, Hee-Haw overalls, sunglasses, jewelry — and even the retainer she wore in high school!” 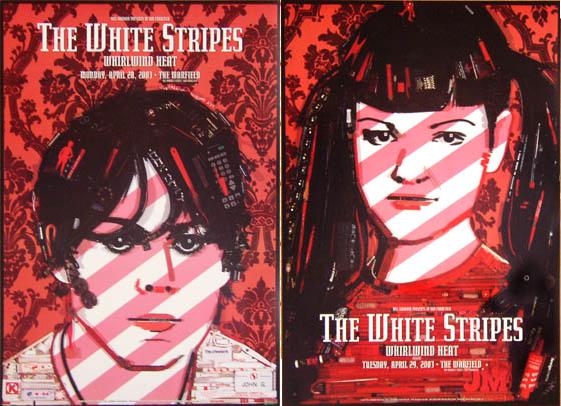 Mecier’s artwork has been widely circulated, and many have been featured as concert posters, including the image of P!nk, in its poster form below right. As well, a poster for Conan O’Brien’s stand-up tour can be seen below left. 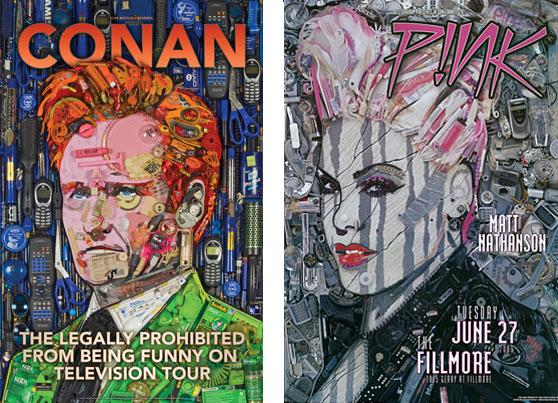 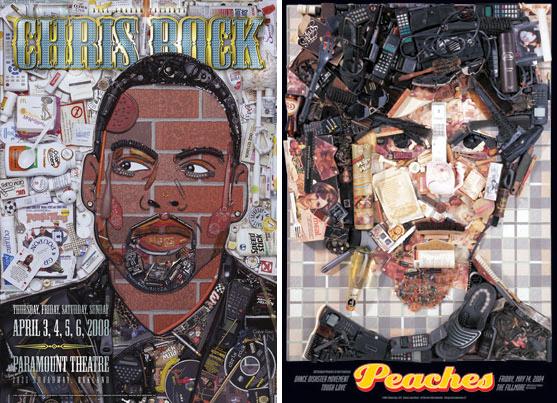