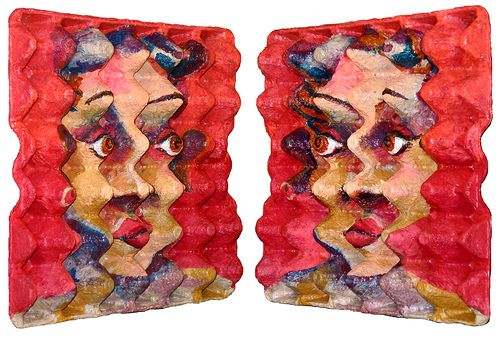 Enno de Kroon has gone where no man has gone before. Children have been there many times, but adults? Not so much. We’re talking about egg carton art. Remember those careless childhood days that turned an egg carton into a canvas or a sculpture? Based on this memory, Dutch artist Enno de Kroon has made ordinary egg cartons his canvas, turning them into what he calls “two-and-a-half” dimensional paintings, an art form he calls “Eggcubism.” What an incredible way to recycle old egg cartons! Each piece is unique, using the texture and shape of the egg carton to full advantage, creating a fragmented, multifaceted image. This process of occlusion is intended by de Kroon as the “fusion of direct and indirect perception” by means of which “conventional imagery is overtaken.” He compares his egg carton portraits to the two faces of Janus, which “look at the present and the future congruently.” In fact, the portraits are de Kroon’s forte, and he lovingly uses the nooks and crannies to form expressive faces. 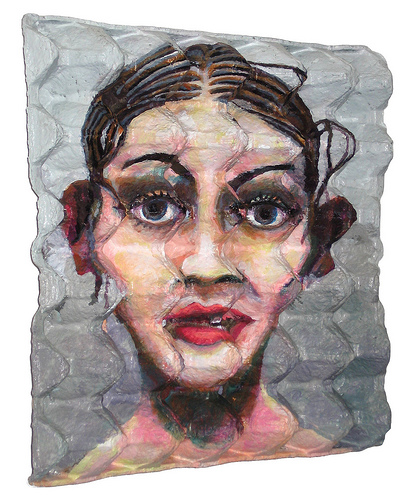 Most people would ask, “Why?” when first encountering de Kroon’s unusual and inconvenient medium. De Kroon explains: “I’ve always played with distortions of perspective, which puts the viewer on the wrong foot and makes them conscious of their manner of observing… The egg cartons had been lying around my studio for some time ready for me to be painted upon, but it took some courage before I could take the plunge. It also took a while to come up with a product I was satisfied with.” 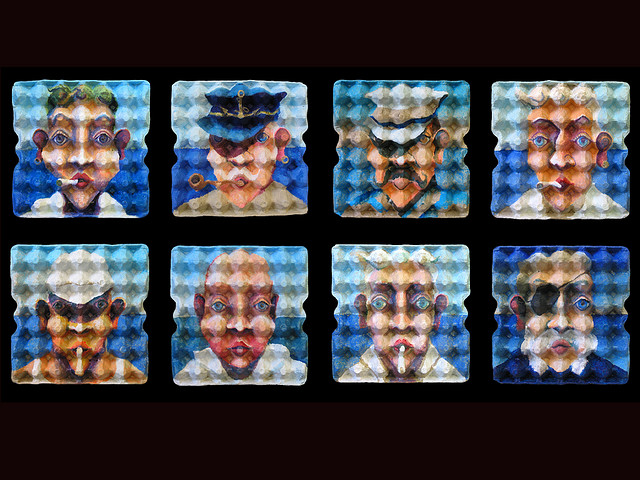 An advantage of an egg carton canvas, though, is that it looks different depending on the perspective. None of the pieces are ever really the same, inviting viewers to take a look from all angles. De Kroon confirms: “Painting with hindrances requires a new approach by the painter, which in turn has led the viewer to have to take a new approach to looking at the art.” 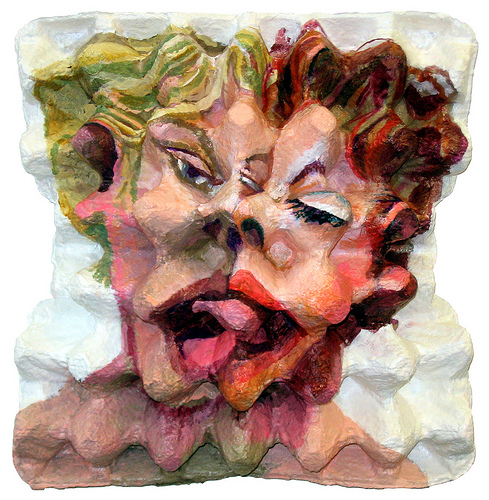 Viewing this art becomes an activity in itself, thus making it interactive, similar to the cubist works of the early 20th century. Thus, de Kroon credits Picasso and Braque as his influences, stating: “They were the first to show us that you can take an object, a person or landscape, and simultaneously show it from different angles.” 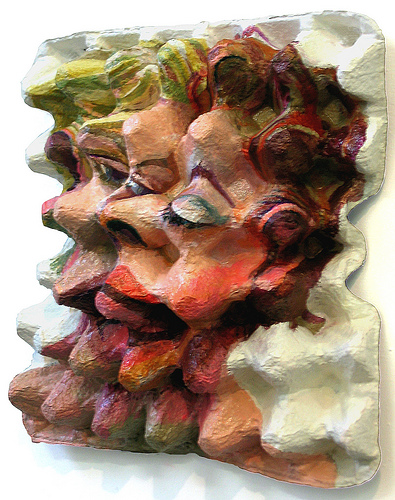 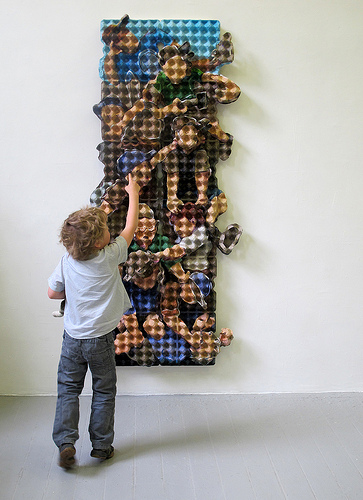 But, unlike cubistic painting that usually has one solution or one way to look at it, de Kroon wants to draw the viewers in, make them part of the artwork and hold their attention for a long time. He explains: “It remains always with my paintings that it isn’t the single or multiple interpretations of the artist which matter. The viewer plays, by simply accepting my work, an active role. My work is dependent upon the viewer; it is only valuable once it is in the spirit of the one who beholds it.” A change in perspective turns this monster… 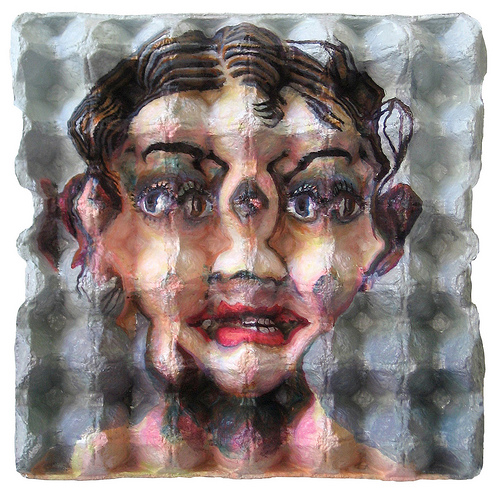 … into a smiling Spanish beauty: 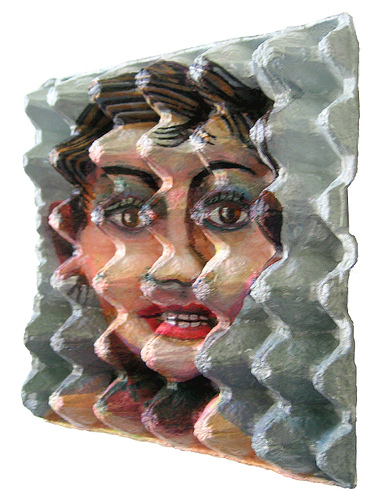 One might think that this places much responsibility on the viewer’s shoulders, but de Kroon is not asking his audience to engage in something that wouldn’t come to them naturally. He explains: “One could say that the complete image just emerges sublimated in the viewer’s mind. Gestalt psychology states that human perception aims for completeness. Perceptions are being added subconsciously. My eggcubist works evoke conscious and dynamic adding.” 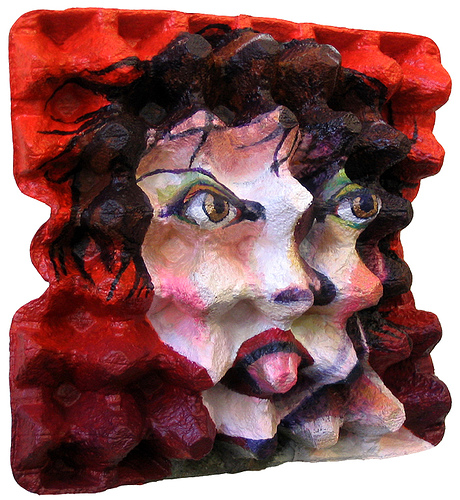 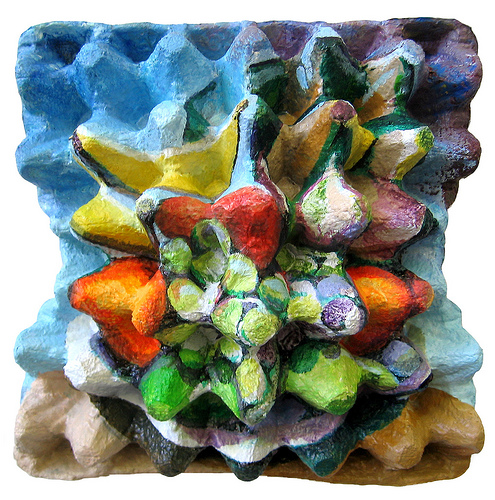 In our age of constant visual stimulation, catching someone’s attention for more than a few minutes is quite an achievement, especially with an image or object that is not moving. In fact, interactive art makes you move and is thus good for your health as well. We like it!

Enno de Kroon with one of his artworks: 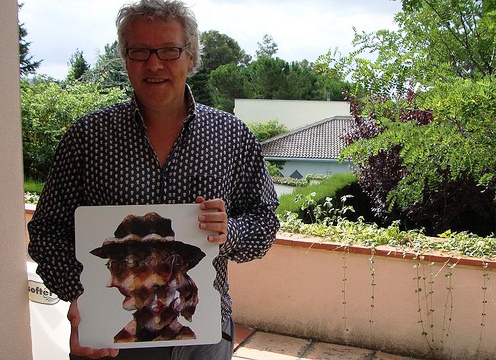 The 48-year-old visual artist and painter is based in Rotterdam, the Netherlands. He studied painting, drawing, design and sculpting at Rotterdam University from 1981 to 1986. All of De Kroon’s egg cubist works come in handmade boxes like the one pictured below. 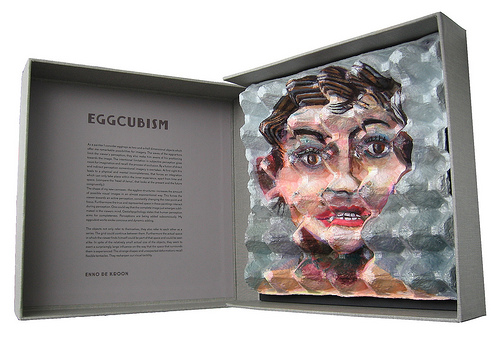 Thinking out of the (egg) box has never been so much fun. More information about Enno de Kroon’s art can be found on his website and flickr pages. All images used with permission of Enno de Kroon.