Everyone loves jelly beans, but they’re not just for eating — the tiny beans also make surprisingly good “ingredients” for works of art. Jelly Belly Art, that is. 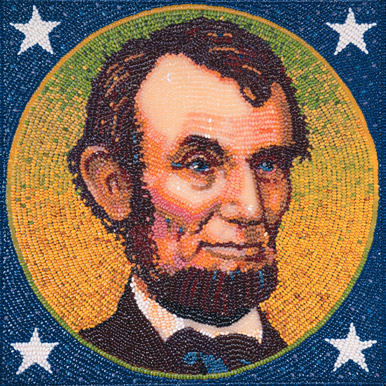 Unless otherwise noted, all images used by permission of Jelly Belly Candy Company and used with the company’s permission.

There are few people who don’t love jelly beans, the multicolored hard candy with the soft center, now available in more than 50 flavors. But did you know that the tiny candy beans can also be creatively recycled to make exquisite portraits? 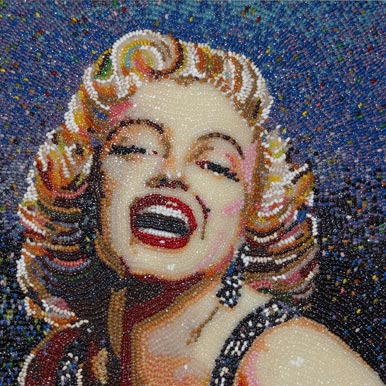 Marilyn Monroe’s stunning portrait was created by Roger Rocha from more than 8,000 beans and unveiled in January 2008. 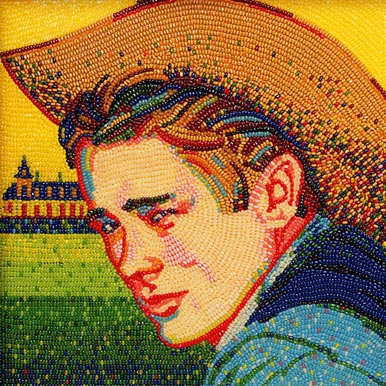 The picture of James Dean was inspired by one of the three films that the legendary actor is famous for — Giant (1956). Just as unusual as the actor are the bean flavors used: cherry cola (so ’80s), cappuccino, caramel apple and toasted marshmallow. 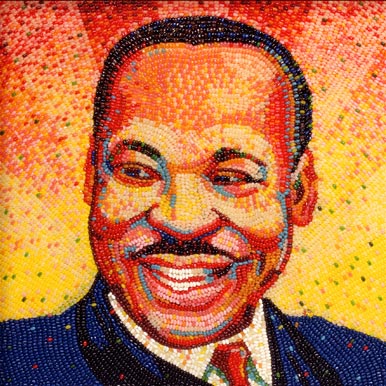 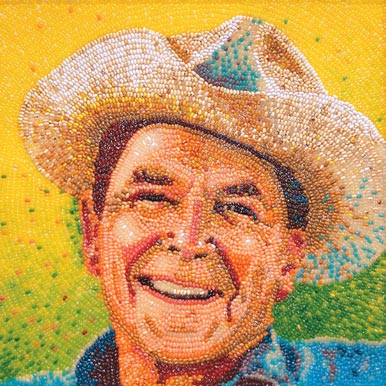 Called “Jelly Belly Art,” the first jelly bean portrait was created by U.S. artist Pete Rocha back in the ’80s, a decade that came to love bright colors and outlandish art. Rocha was a big fan of then U.S. president, Ronald Reagan, who he knew shared his passion for jelly beans. Thus, the idea was born to create Reagan’s portrait in jelly beans, a feat that took him more than six months and 10,000 jelly beans! The response was overwhelming, though, and even Reagan himself loved it. In fact, the portrait still hangs in the Ronald Reagan Presidential Library in Simi Valley, CA. From here, there was no stopping Rocha and portraits of other celebrities followed — more U.S. presidents, Martin Luther King, Amelia Earhart, Laurel and Hardy, Elvis, James Dean and many others. 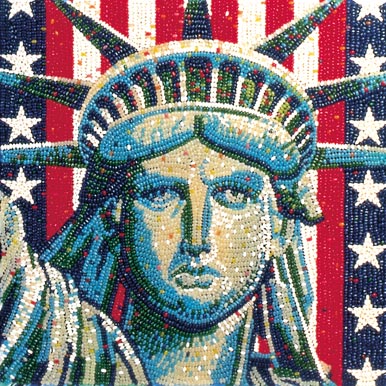 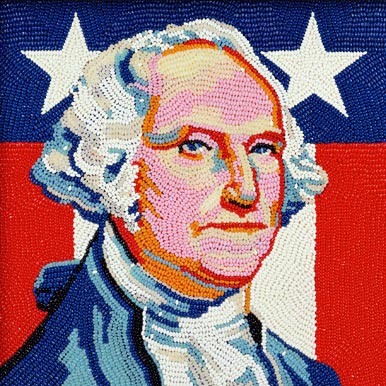 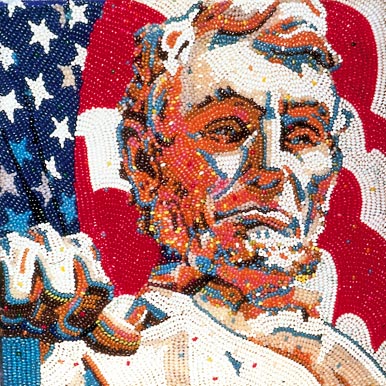 Abraham Lincoln got not one, but two portraits — the first one of Lincoln looks rather stern (top); the second modeled after the Lincoln Memorial in Washington, DC. Very tasteful (and probably tasty!) portraits.

All in all, Pete Rocha lovingly and painstakingly created over 50 Jelly Belly portraits before his death in 2004 at age 65. Fortunately, he passed on his skills to his nephew, Roger Rocha, who continues the tradition, creating more Jelly Belly portraits in the U.S. In the U.K., artist Malcolm West produces amazing jelly bean artworks. 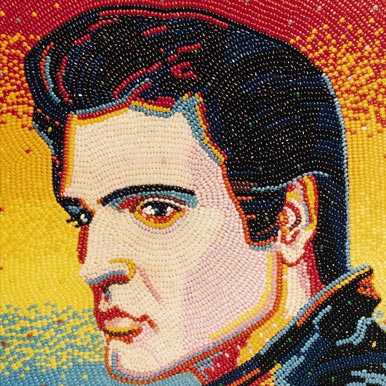 Elvis, the King of Rock ‘n’ Roll, was created with loads of blueberry, very cherry and raspberry, while his trademark hair style was made with licorice. 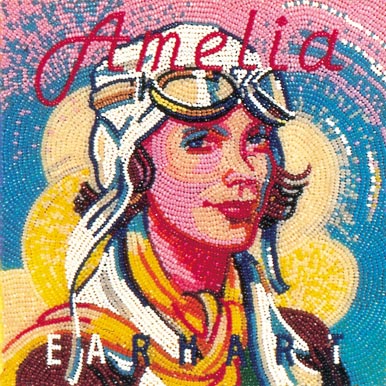 Fans of the daredevil aviator will be thrilled to know that the Amelia Earhart portrait was created with berry blue, cotton candy, buttered popcorn, lemon, very cherry and coconut. Yum! 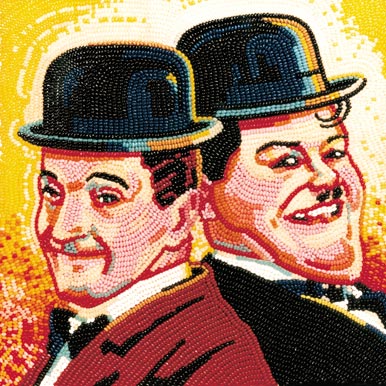 In this portrait of Laurel and Hardy (or Stan and Olli, if you prefer), licorice provides the darker tones while bubble gum, pink grapefruit and very cherry make up the skin tones.

But how exactly does it work? First, a rough sketch of the subject is drawn from a photograph. The next step is the most crucial: creating a tight color composition as a painting that is then recreated using all 50 Jelly Belly flavors as a color palette.

The usually 4-foot by 4-foot painting is covered in clear varnish and each color is then matched to the appropriate bean color. The bean is placed in position and glued on. There’s little room for mistake here but the effort is worth it, as it is a unique medium, with its bright colors giving the finished portrait a vibrant and impressionistic effect. If only Van Gogh had had jelly beans to work with — maybe all that sugar would have made him a happier painter? In any case, Pete Rocha did eventually pay tribute to the famous painter with a jelly bean portrait. 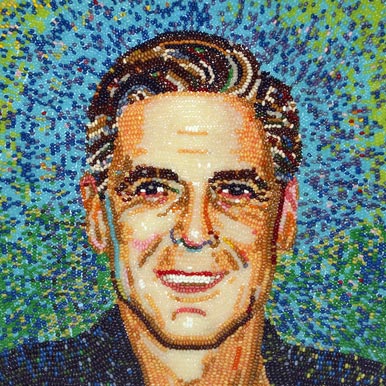 This 3-foot by 5-foot George Clooney portrait was created by Roger Rocha and presented to the public in February 2008.

Needless to say, each portrait requires thousands of beans, many of which end up in the belly of the artist. But Jelly Bean lovers need not cry out over this waste, as the company is careful to use mainly those beans that (due to stringent quality control) wouldn’t have made it into shops anyway, so it really is a delicious example of recycling. 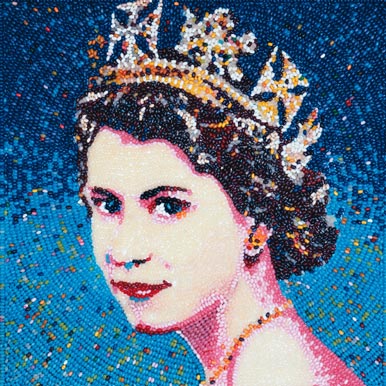 This portrait of Queen Elizabeth II as a 21-year-old was created by Roger Rocha as a commissioned piece in honor of the 50th anniversary of the queen’s reign. The licorice-flavored beans that form the hair create a nice contrast with only the lightest of colors making up the queen’s skin tones. 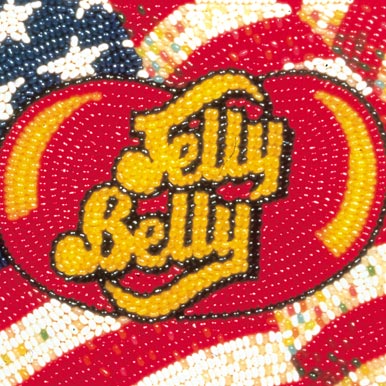 In this Jelly Belly logo, the process was reversed: instead of imprinting the logo onto a bean, the logo itself is made up of thousands of beans. In case you were wondering, the name originated from ’70s blue grass singer Lead Belly.

Peter Rocha was born in San Antonio, TX, and studied art in New York City. In the ’50s, he moved to San Francisco, operating from his Mission District studio throughout his artistic career. Before becoming famous with his jelly bean portraits, Rocha painted many murals and restaurant decorations in the Bay Area — for example Pier 39, the old Phil Lehr’s Steakery restaurant in San Francisco and the Flying Lady in Gilroy, CA. 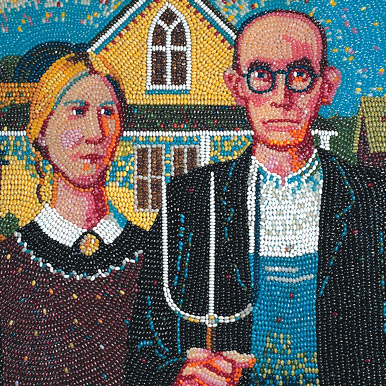 For those wanting to see real jelly bean portraits, a factory visit of Jelly Belly in Fairfield, CA, or St. Albans, U.K. may be the best options. And no, you are not allowed to lick any of the portraits. The next best thing might be to create your own portrait out of jelly beans, now available on the website in minutes.