You might be worried to learn what calamities caused these wrecks. Worry not — they’re made out of recycled cardboard! 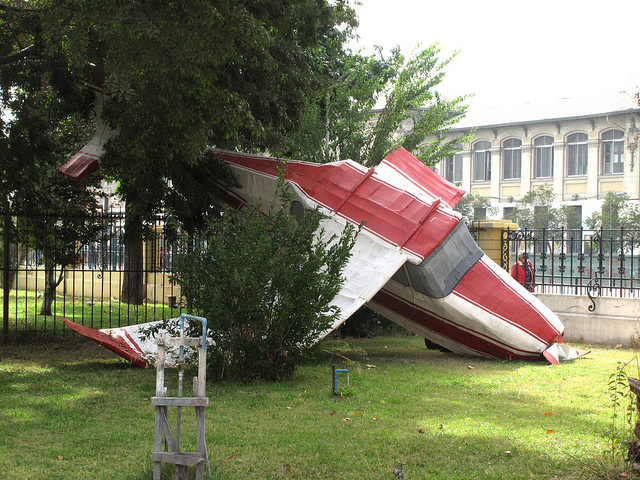 It’s not every day that you see a plane crash in your local park. In fact, it’s even rarer to see the remains of an apparently crashed, recycled cardboard plane — but that’s just what happened in this Santiago locale. 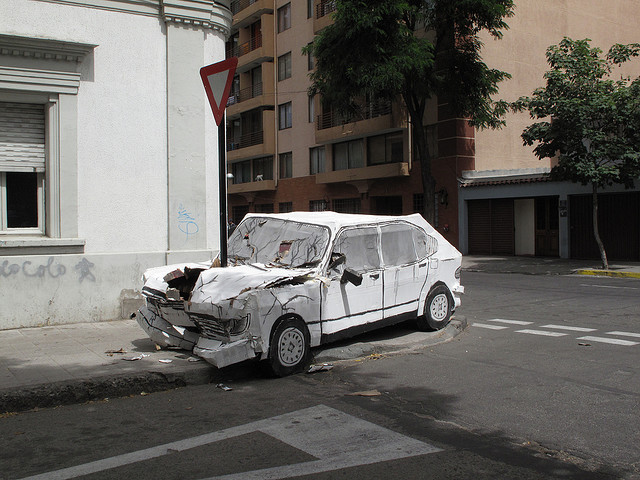 The wreck is in fact a sculpture, created by artists Martín La Roche Contreras and Don Lucho (aka Luise Valdes), who have set about creating cardboard disasters around Chile’s capital, including car crashes (one of which can be seen above) and a grounded (and seemingly dead) Superman. 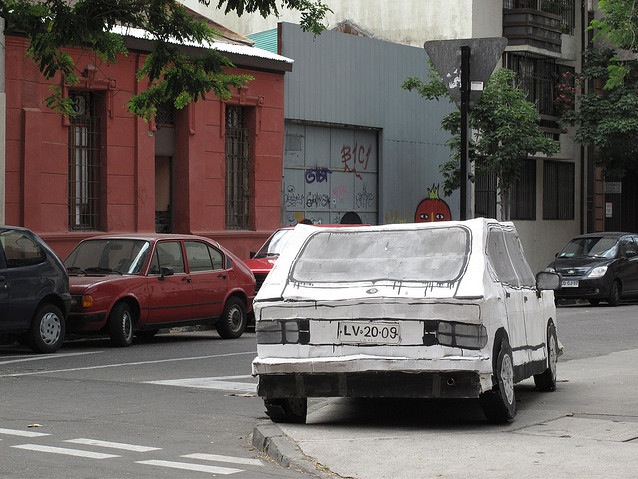 The corrugated cardboard pieces are intended to express a larger-than-life ethos, as if they were exaggerated cartoons, recreated in the real world — as the aptly named CAR-TOON car crash suggests. This piece is actually made out of reused pizza boxes, painted white. 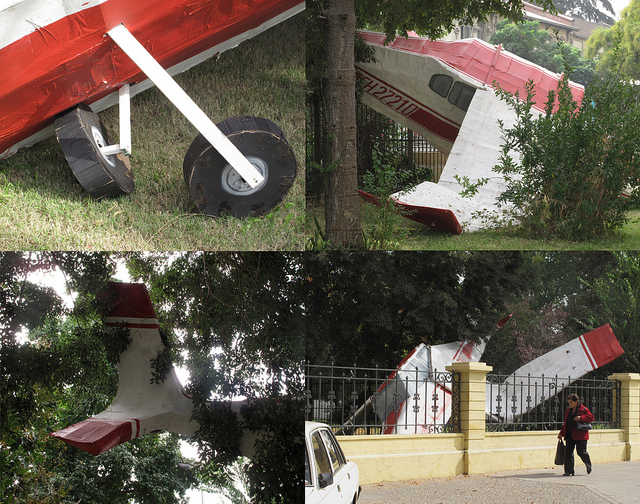 Talking about the public’s reaction to the plane crash, Martín explains: “The people that walked around the park were surprised. From far away it looks like a real crash. But when you got near [you could see] it was only a cardboard invention. We didn’t expect anything of the people, but they really impressed us, because most of them said many things to us, they got involved with the project and asked a lot of questions. It was like a neighborhood happening.”

Above is the CAR-TOON crash “in progress,” which sees the car lurch toward a lamp post in stop-motion animation. Talking about his work, Martín explains: “I try to create a fiction, that is clearly a fiction. It [announces] itself, like the animations from the beginning of the 20th century, when they put the hand of the author in camera. I try to disassemble my fiction. This is the reason why I use cardboard, and paper, and drawings or water painting — because they are considered fragile or unfinished, but in art I can revalue them.” 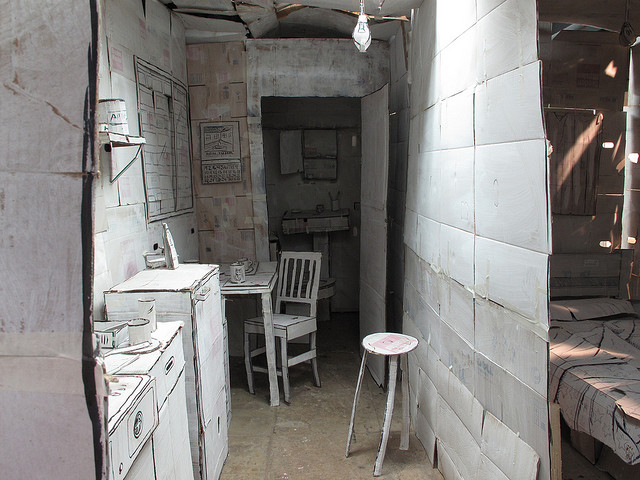 Not every piece by the pair focuses on disaster. Don Lucho has actually gone as far as to build an entire house out of recycled cardboard found on the street. 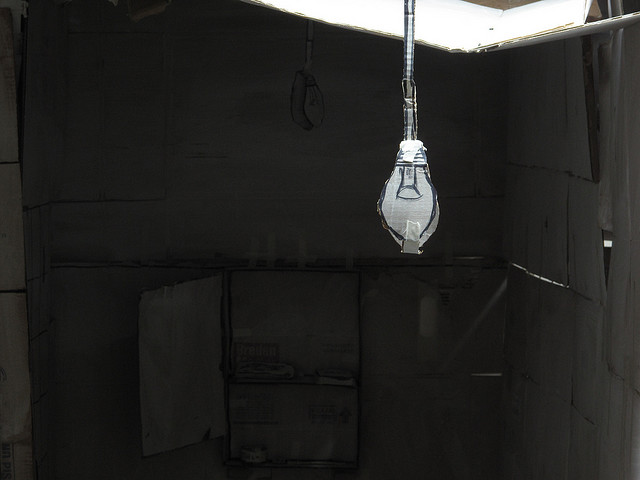 Perhaps the most impressive thing about these pieces is their scale — whether that means hanging a light aircraft from a tree, or recreating a living space in recycled materials. 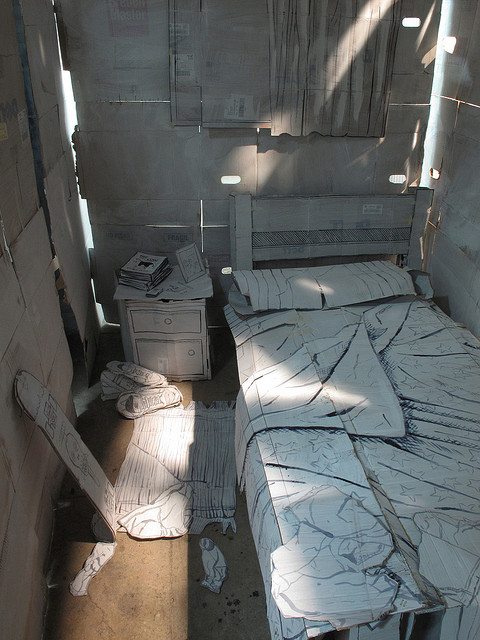 Equally the opposite is true; however, while they might be substantial, they are perfect in their individual details. Just as CAR-TOON has a wing mirror and carefully sculpted bumper, so the cardboard house has a fully stocked kitchen and an immaculately imagined bedroom, from the folds in the sheets, to the shoes on the floor (as seen above). 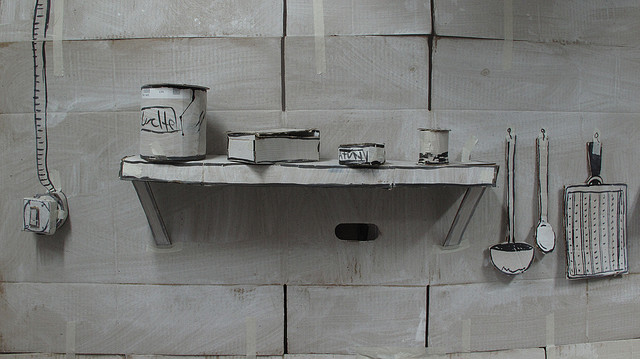 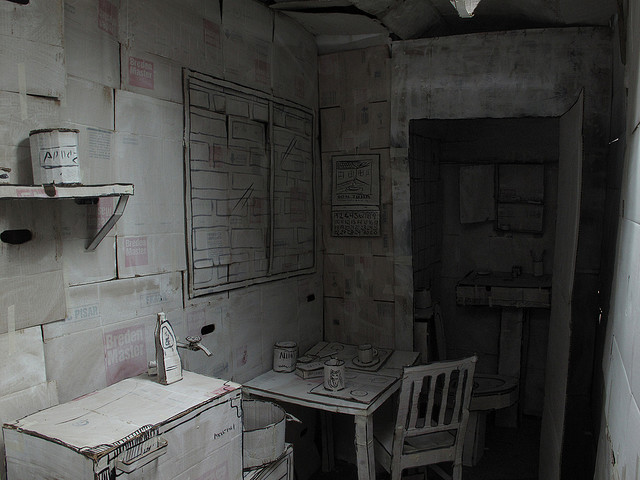 The house playfully embodies a similar sense of the unreal as CAR-TOON. While the details might be in place, it’s not too hard to see that this is only an outline of what we imagine a home looks like. In fact, the facsimiles in this house literally have black lines around them. Instead of recreating a home, Don Lucho has repurposed our idea of what it should look like. 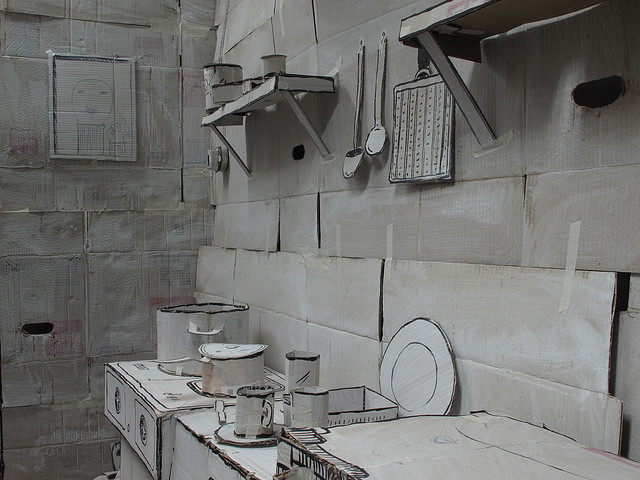 Of course, all this would be impossible without the use of recycled materials. The angular, almost, but not quite, perfect forms rely on the appropriation of flimsy, insubstantial frames that emphasize the fact that what you are seeing is not quite real. 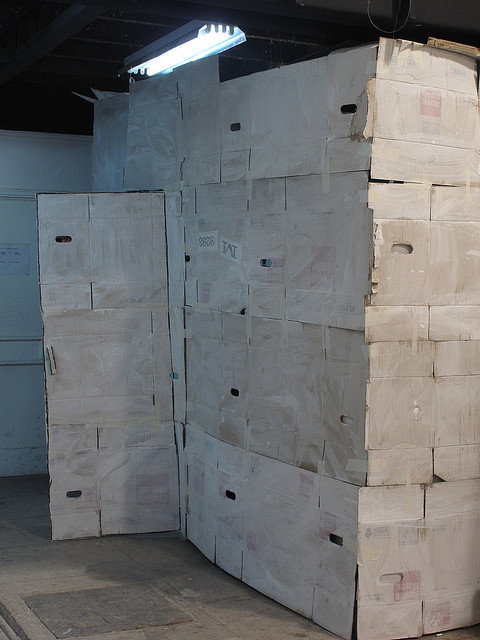