Durable, renewable and tasty, the soybean has many uses. Soy-based building products are rapidly become the choice of many.

The highly versatile, nutritious and rather tasty legume known as the humble soybean — utilized by Chinese culture as far back as 3500 B.C. — is one of the world’s most valuable commodities. Yielding 15 times more protein per acre than animals raised on the same amount of land, it’s no wonder why the green bean (which, incidentally, is also available in myriad colors, from burgundy and yellow to marbleized brown) is highly coveted. With record high plantings of 78.1 million acres in 2010 (just in the United States alone), it stands to reason that we must be doing far more with it than merely just chowing down. Indeed, we are. In addition to creating various planet-friendly meat substitutes, oil, animal feed, alternative fuel and industrial products such as soy-derived cardboard, cosmetics, biodegradable sunscreen, clothing, candles, soap and automobile parts, we also convert the pear-shaped oilseeds into a diverse array of home improvement supplies. The days of oriented strand board and petroleum-based insulation are now numbered in light of a snappy new crop of planet-friendly, easily renewable soy alternatives that squeeze the most out of the bean, such as: 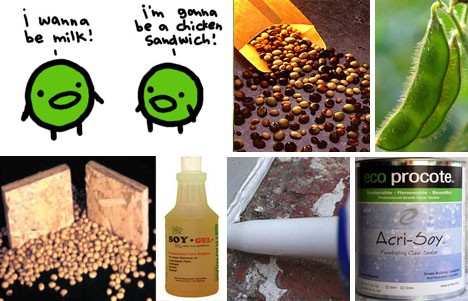 Before you kick up your heels and celebrate the eco-flexibility that you can now enjoy as an informed consumer forging ahead with a greener home improvement project, this is the part of the article where we explore the dark side of the bean. Just 13 years ago, 8% of the soy crops planted in America were of the genetically modified variety, whereas today, that number has soared to a record-breaking 93%. What that means is that at the genetic level, scientists (most often, Monsanto scientists, to be exact) have made soybeans resistant to our country’s favorite herbicide, Roundup. In theory, this practice may seem perfectly sensible since the crops are able to withstand modern agriculture’s chemical assault while emerging triumphant against hungry little pests. Aside from the questionable impact on human health when GM beans (and their Franken-tweaked brethren) are consumed, there’s a legitimate concern regarding how bio-tech crops can potentially compromise biodiversity. In terms of the home improvement industry, it behooves us to consider the lesser of many evils and let’s face the facts — modern industry has offered us countless conveniences and innovations while leaving an unfortunate trail of waste in its wake. Is it better to rely on wood- and petrochemical-based products, both of which take a significant toll on our natural resources, or continue to pursue easily renewable alternatives, even if they’re still not quite ideal? On the surface, soy seems to be a far more sustainable alternative if we can turn a blind eye to the pesky GMO skeleton in its closet. To this day, scientists are at odds regarding the exact ramifications of genetically tweaked crops, but compared to old-school home improvement products that release a mushroom cloud of volatile organic compounds throughout their life cycle, soybean-derived versions seem positively peachy. Eco-conscious companies are jumping on the soy bandwagon in record numbers because they recognize that soy alternatives, while not entirely perfect, are admittedly a step up from the highly processed, chemically laden and environmentally toxic building products of yesteryear. Imagine applying a paint-stripping product made with soybean esters rather than industrial-strength chemicals that actually does the job without inadvertently torching all of the cilia out of your breathing passages. Let’s up the ante by making it safe to use not only outdoors, but also inside your home on an impressive variety of surfaces. This is the future of sustainable soybean oil-infused building products. While these green offerings may seem slightly pricier than their predecessors, take heart in the fact that the United Soybean Board continues to research and develop new applications that will surely result in the bean reigning supreme!