Four Ways to Reuse This Halloween

Halloween decorations, costumes and candy can be expensive and wasteful. Find out how you can cut back using what you probably already have.

Halloween is around the corner and the seasonal aisles at big box stores are already filled with costumes, pumpkin buckets, face paint and more. You don’t have to go crazy in the Halloween aisle this year, though. Here are four ways to reuse this Halloween.

You can’t be a scary zombie without a little zombie face paint, right? However, traditional Halloween face paint is typically filled with nasty chemicals. Last year there was a recall of face paint sold through Oriental Trading Co. The face paint was used at a child’s party and several girls later broke out in a rash and experienced burning and swelling. Ultimately, tests showed that the face paint was contaminated. Although that issue was fixed, traditional Halloween makeup is something my family avoids at all costs. 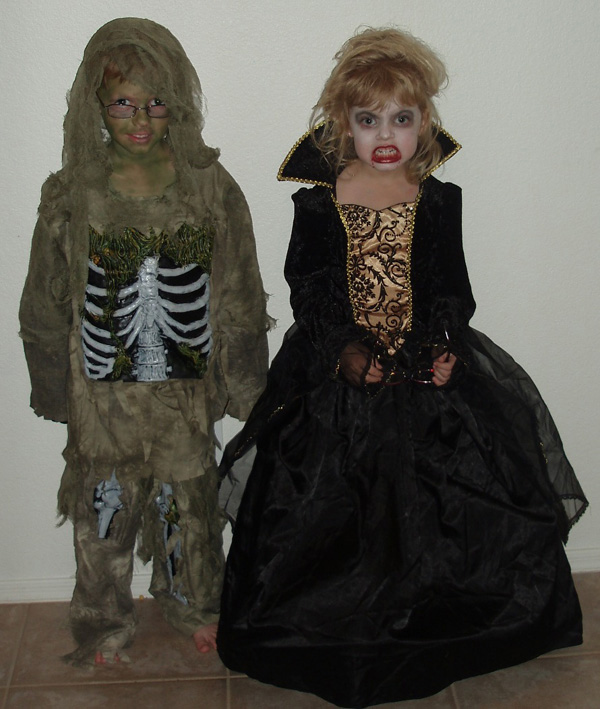 But my kids still like to have that scary zombie makeup, so what do I do? I buy organic or all-natural cosmetics and use them as face paint. As you can see in the picture to the right, a little green or white eye shadow goes a long way. I’ve found that putting lotion on first and then dusting on the shadow with a cotton ball before the lotion dries helps the makeup stay longer, but also gives it that creamy face paint look. Red lipstick is great for fake blood if your daughter wants to be a vampire. Although the cosmetics aren’t as cheap as Halloween makeup, you often get what you pay for. Plus, you have fresh makeup to use for yourself after Halloween is over.

Gone are the days of the orange pumpkin candy bucket in our house. When I was a kid we used pillowcases, but unfortunately my two aren’t keen on that idea. So, this year we are planning on using a reusable grocery tote. That’s right, Fresh & Easy’s laundry tote will be the Halloween candy bag. The kids like the grocery totes, so there won’t be any convincing needed on my part.

Even if your child doesn’t want to be the same thing each year, you can easily reuse a Halloween costume, even if the child has grown out of it. Say your 4-year-old daughter wants to be a princess one year. The costume fits perfectly, but between 4 and 5, a child can grow a lot. The next year, ask your daughter if she would like to be a zombie princess! Now don’t laugh, my daughter has been a zombie princess before, and everywhere we went she was complimented on her different take on the traditional princess theme. We simply cut up the ends of the dress a bit so it looked tattered, took some charcoal gray eye shadow and smeared it all over the dress to give it that “just out of the grave” look and then used our Halloween cosmetics to give her face the typical zombie pallor. Voilà, last year’s princess became this year’s zombie princess!

If you’re involved in any local parenting groups, start a costume swap. Kids grow, and inevitably you’ll find someone with a child older than yours that has a costume to pass down. You can do the same by passing your costume down to a younger child in the group. Depending on the size of your group, you may have many options to choose from, but now is the time to start organizing a costume swap. These are four easy ways that we’ve brought reuse into our Halloween routine. How do you plan to reuse this year?