Tally the cans you recycle, find drop-off locations and more in the new Apple app, now available for download. 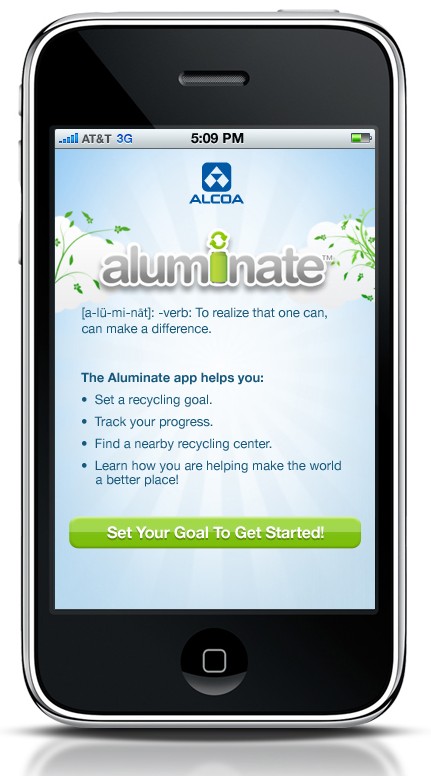 Worldwide aluminum recycler Alcoa recently partnered with 1-800-RECYCLING.com to debut a new kind of recycling iPhone app that is quickly winning over greenies and inspiring others to jumpstart their recycling efforts. With the Aluminate app, now available to download for free in the Apple App Store for iPhones, iPod Touches and iPads, Alcoa has combined its wealth of aluminum recycling prowess with 1-800-RECYCLING’s intuitive recycling location search into an easy-to-use recycling calculator. Currently, aluminum is recycled in the U.S. at a rate of nearly 57%, down from its highest levels in the 1990s. Alcoa aims to change that, and fast. The company has a set an ambitious goal to raise this recycling rate to 75% by 2015. According to Alcoa, if every American recycled just one more can per week, that goal would be realized. “The basic thought process [in making the Aluminate app] was, ‘What can we do to help Americans recycle?’” says Mark Kasperowicz, Alcoa’s global digital marketing and social media manager. “We have a robust website, but one of the things we wanted to throw into the mix was an iPhone application.” Aluminate’s stand-out quality is its recycling competition and sharing aspect. Users set a goal for how many aluminum cans they would like to recycle in a given time period and then log their activity on a daily basis. The app even keeps track of a dollars-and-cents worth of the recycling activity to date, proving that aluminum is never junk — it’s a commodity. Kasperowicz says that prior to the app’s development, Alcoa reviewed every recycling-themed app available in Apple’s App Store to see what was missing in the field. The idea of using the game-like competition aspect was a no-brainer. “There were a handful of apps out there that each serve a singular purpose,” he recalls. “We asked ourselves, ‘How many of these apps were providing a calculator to keep track of recycling activity?’ The answer was none.” 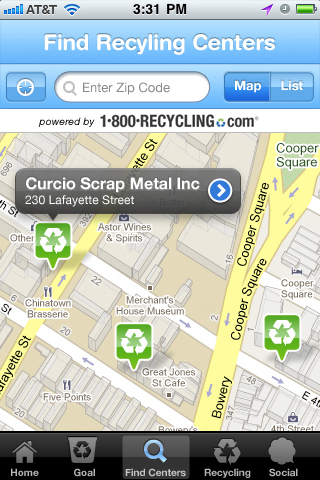 Aluminate’s goal is straightforward: Provide a fun, simple tool that inspires recyclers to recycle more consistently while also capturing the non-recycling demographic and making them interested in getting involved. Kasperowicz is already seeing results: “We’ve already gotten feedback from users who are saying, ‘This is making it easy enough for me; I might just recycle!’” The reuse value of the app is high, as users can log the aluminum cans they properly recycle, as well as broadcast their progress to friends via Facebook or email. 1-800-RECYCLING’s drop-off location search (left), powered by the device’s GPS capabilities, keeps the recycling incentive high, even on the go. Beyond the fun of tracking one’s recycling progress on the Aluminate app, Alcoa is serious about educating app users on the necessity of recycling aluminum. The app is chock full of interesting facts and figures, recycling information, videos and recycling news. To download the Aluminate app, search for “Aluminate” in the app store or click here.