Instead of donating to your local Salvation Army store (never throw out a pair!), shoes can be restored and turned into beautiful artworks with a story to tell! 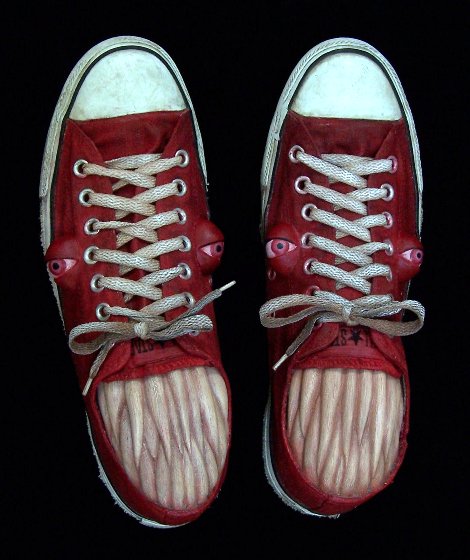 Gwen Murphy is an artist who really has taken to heart the idea that shoes reveal their wearer’s personality. Or, more precisely, she loves bringing out a shoe’s personality. She takes the old shoes of friends, family and strangers and turns them into soleful artworks. Mostly using pairs (why separate old companions?), she gives each shoe the face she feels inspired to create. 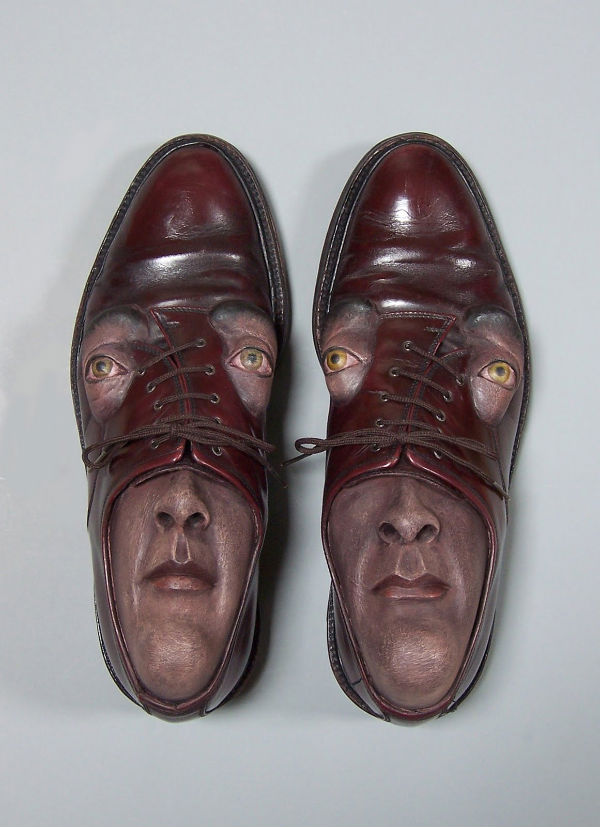 She explains her beginnings: “Since I was a very young child, I have looked at shoes and found them looking back at me, each pair with its particular personality and facial expression. When shoes are lined up near a door or in a closet, they are trusty steeds, waiting to serve. Mouths yawning open, they sometimes look sleepy, grouchy or fierce; sometimes they look like they are singing. They are like a species of beings made entirely of pairs of identical twins. [The Foot Fetish] series of sculptures is my way of bringing forth the presence I see in each pair of shoes.” It really is an amazing way to repurpose unwanted old shoes. 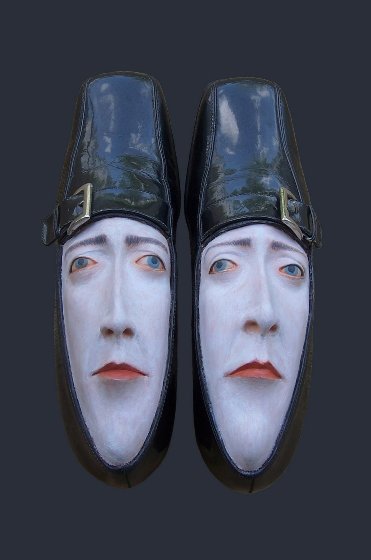 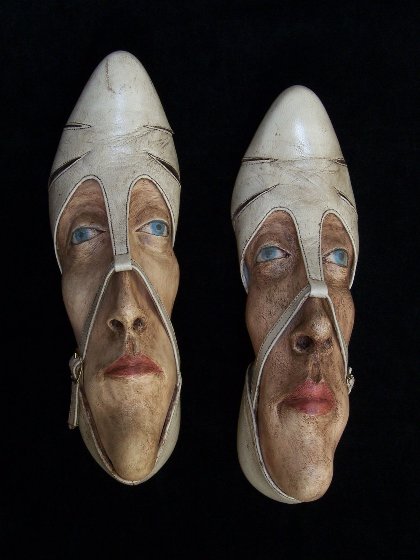 Looking at each pair, so masterfully crafted by Murphy, it is easy to see that there is something to her theory. “Sentinels” really do look like a pair of guards, while the mournful-looking “T-Straps” appear similarly helmeted. 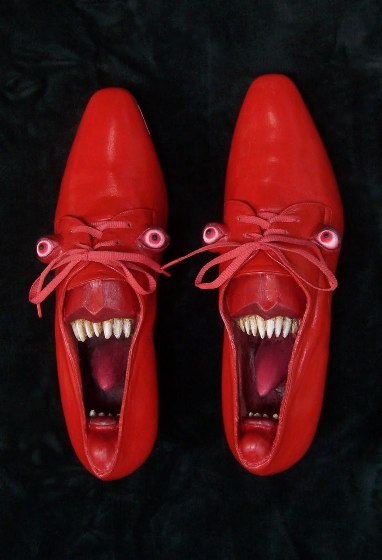 What’s amazing is that almost every pair (however devilish!) has a history. Talking about the pair below, Murhphy says: “This pair was commissioned by a woman named Cynthia who was married in these shoes, and who has a real connection to the story of The Wizard of Oz.” That sounds very intriguing, but unfortunately for those interested, the artwork (like many of Murphy’s pieces) has already been sold. But, not to worry, there are plenty more to choose from! 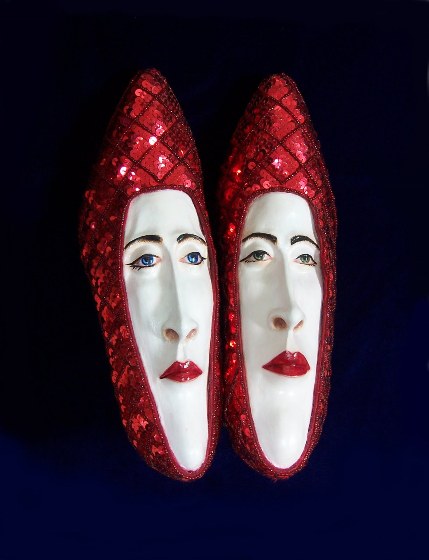 You might be wondering why the series is named “Foot Fetish.” For Murphy, a fetish is “an object believed to have magical powers to protect or aid its owner.” Thus, she sees a shoe as a kind of fetish because “it has a presence, and the power to protect and transport us.” That’s definitely a whole new, thought-inspiring take an on an old pair of shoes. 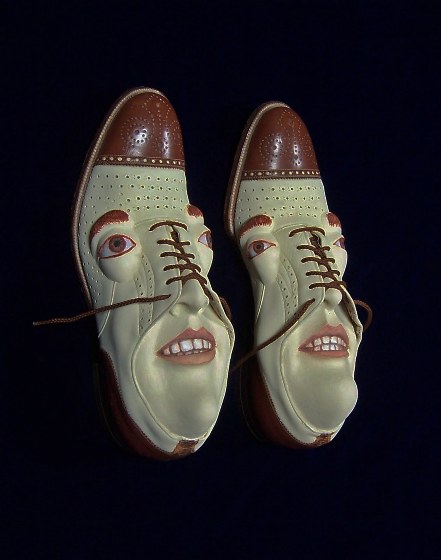 Describing this pair, Murphy says: “This pair of shoes was given to me by a retired doctor who said they were from the 1940s.” These two-tone Oxfords definitely show their age, though Murphy did a good job restoring them. 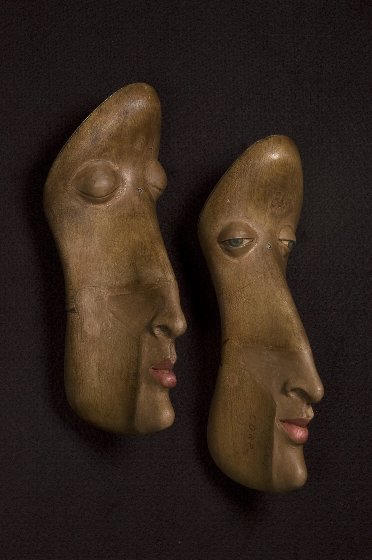 Even wooden lasts like the ones above make for elegant works of art that would look good on any wall. Notice how the faces in a pair are never the same! Sometimes, they are very strikingly different; sometimes just a little, so that even spotting the difference requires a second glance. 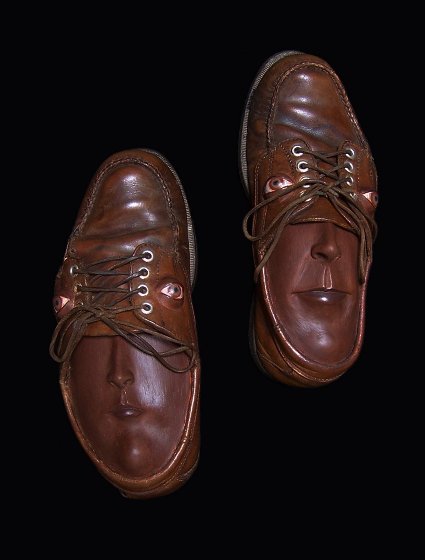 “[This] was a 20-year-old pair of topsiders belonging to my friend, Bill, whom I nagged until he gave them to me. Those took a lot of repair work,” explains Murphy about the pair above. 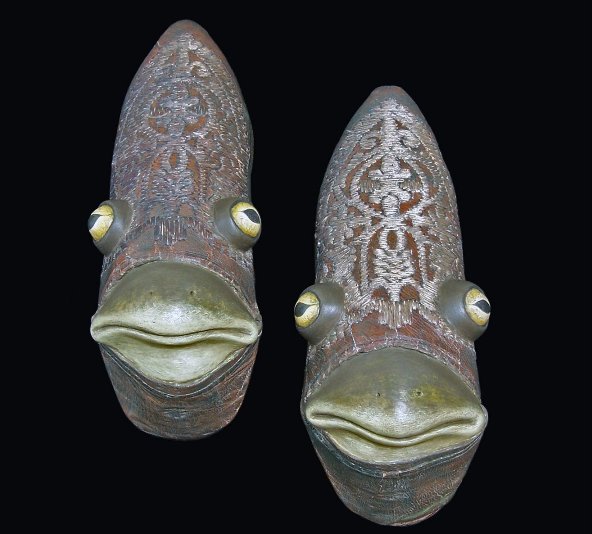 Thanks to Murphy’s imagination, these shoes make a perfect pair of frog princes. Murphy explains how they came into being: “These green embroidered leather slippers were on their way to the dumpster of an antique store, when an alert young artist friend of mine rescued them and brought them to me.” 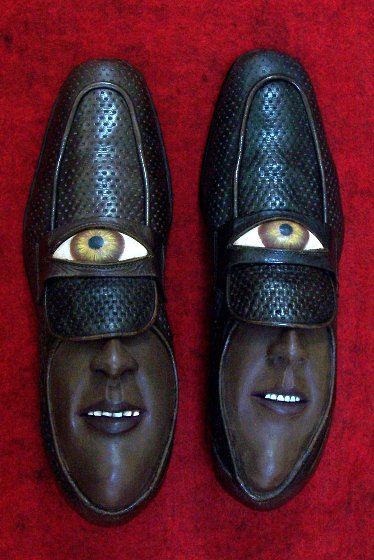 These size-12 loafers are special for Murphy and thus not for sale. She says: “[They] were purchased for $4 from the thrift shop in Wellfleet, MA. The teeth are my children’s baby teeth.” A priceless memory indeed. 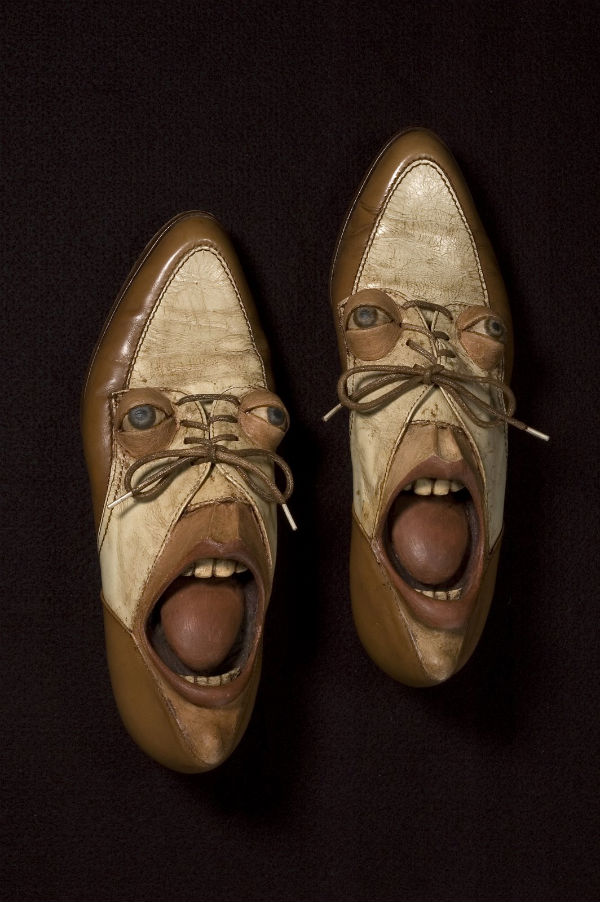 It’s easy to miss the eyes on the pair of “Converse” pictured top, wonderfully crafted out of Murphy’s teenage son’s old sneakers. Not to leave anyone out, Murphy also converted her daughter’s old jazz shoes, which she used to wear for high school performances, into a scream of a piece. Or are they singing? 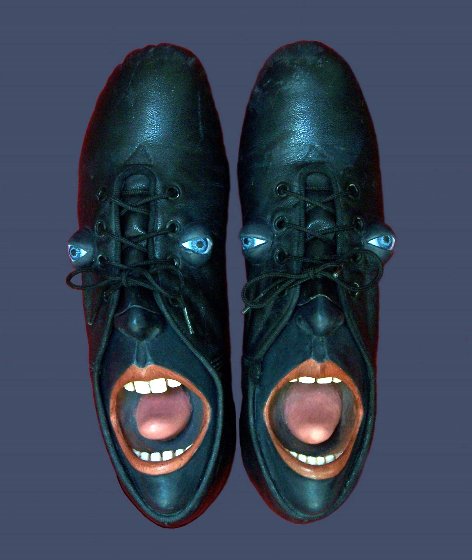 This pair of old golf shoes was once worn by Murphy’s husband. Don’t they make the perfect pair of harlequins? 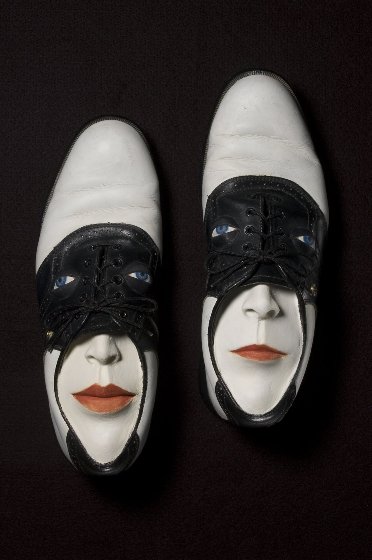 Murphy graduated with a B.A. in Fine Arts from the New College in Sarasota, FL, in 1986. She went on to pursue an M.F.A. from Boston University College of Fine Arts and graduated in 1990. Her Foot Fetish series started in 2005 with a friend’s thrown-out pair of ankle boots and, since then, dozens of cool shoe art creations have followed — all made from secondhand, found or donated pairs. 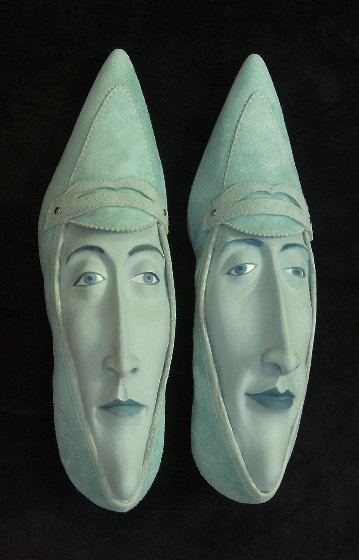 Murphy’s growing collection has been exhibited in solo and group exhibitions around the country and it is just a question of time before we see her first international show. The fact is, Murphy’s shoe art will always be a perfect fit! To see more of them, visit her blog. With special thanks to Gwen Murphy for sharing images and information for this article.