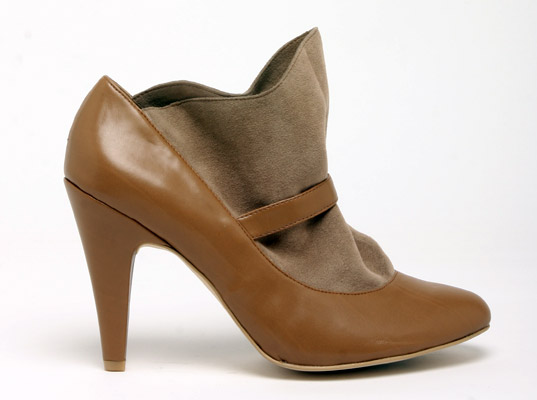 Everyone these days is upgrading to thinner, flatter, more powerful televisions. Plasma, LCD and even 3D television sets are making headlines all over the world, and quickly driving old analog sets into oblivion. You might think that dismantling and recycling are the only options for these worn-out “tubes” but designer Elizabeth Olsen has devised a way to turn trashed television sets into stylish vegan footwear that will make fashionistas everywhere take a second look. Olsen’s label, aptly named Olsenhaus, has released an entire fall/winter collection of pumps, wedges, stiletto booties and knee-highs that feature an innovative polyester microfiber made from trashed television screens. Many vegan shoe designers opt for faux leather to create their non-animal fashions, but the use of these petroleum-based fabrics is just deplorable. To Olsen, phasing out petroleum-based faux leather in favor of something more sustainable is the logical next step in vegan fashion. If you think that these shoes are going to be bulky and clunky like the televisions they’re made from, think again. The entire collection is sleek and stylish, without so much as a hint of the hazardous electronics that were used in its creation. “The incorporation of industrial waste shouldn’t be perceptible to the naked eye. The product needs to have substance to it, so you have to explain yourself or people would never know it was a) vegan or b) made from recycled TV sets,” Olsen told Ecouterre. Now Olsen is also experimenting with a shoe sole made from recycled rubber mingled with sawdust, and a heel derived from ground-up recycled-plastic pellets.