The detritus of industry takes on organic form in the mind-blowing moving animal sculptures of Chris Cole. 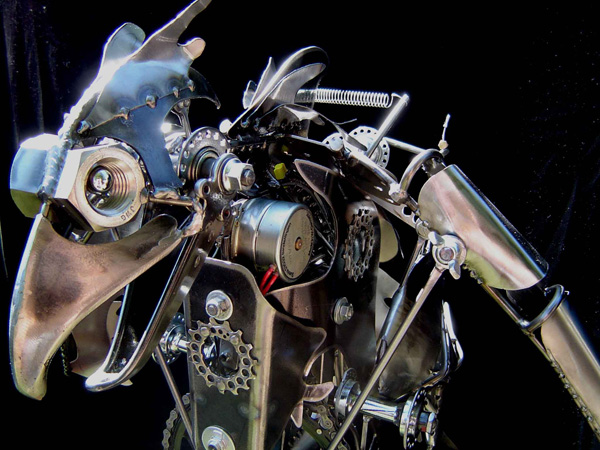 The Condor vulture is the largest flying land bird in the Western Hemisphere. Here, its formidable form is depicted in discarded bike parts and scrap metal; the robustness of the bird’s physique echoed in the hardy nuts and bolts that partly form the sculpture. Created by Chris Cole, the sculpture is mechanical — its wings, legs and beak are operated by two motors. While the result is not quite as elegant as a feathered Condor in flight, the movement of Cole’s Condor is undeniably reminiscent of the real thing. 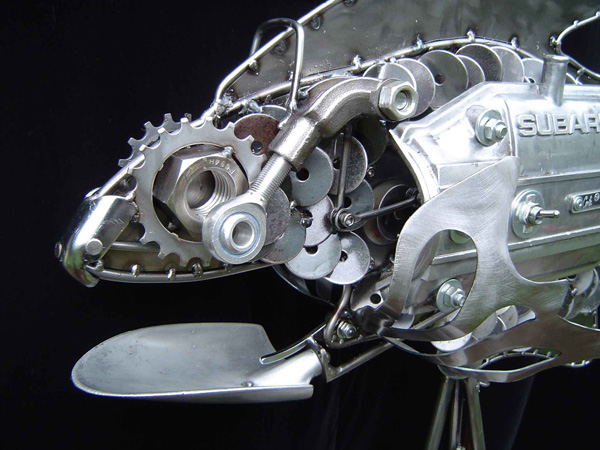 Describing the “intersection of nature and industry” as his inspiration, salvage artist Cole uses materials, some of which are gathered through his day job as a bike mechanic, to create kinetic sculptures that explore “movement, functionality and aesthetics.” 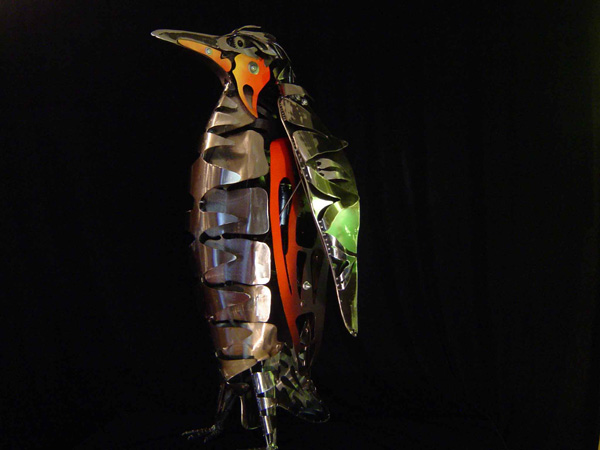 Other sources of his materials include his local laser cutting and fabrication company, Max Manufacturing, as well as his nearest metal recycling yard, which houses 50 acres of metal. “I have found some amazing pieces there,” he says, explaining how most of the heavier pieces that form the bases of his freestanding sculptures and lamps come from this scrap metal jungle. 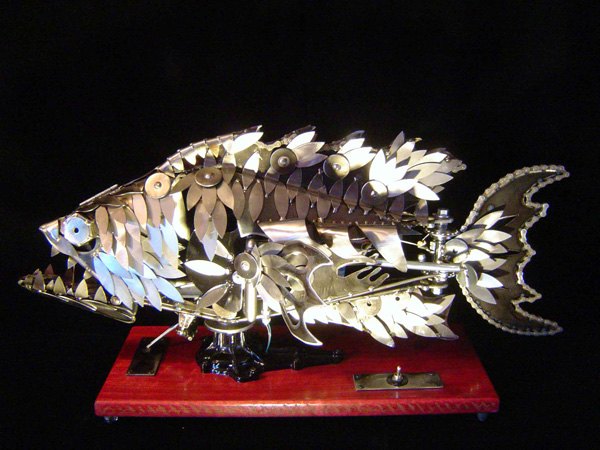 From Max Manufacturing, Cole buys buckets of the parts the company’s paying customers don’t want, at the going rate of scrap metal. The scales on Claud the fish, above, are created entirely from these salvaged pieces. 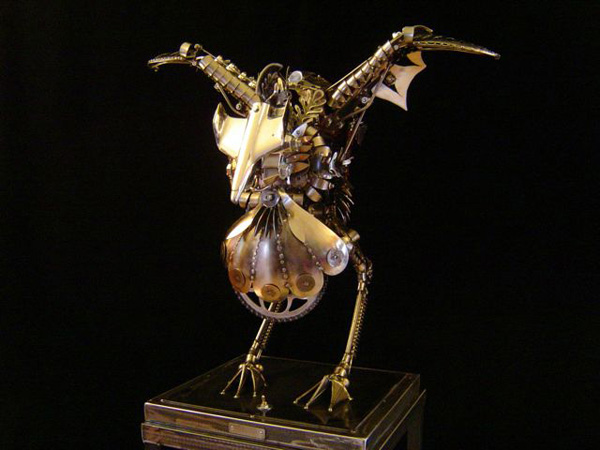 At the heart of Cole’s work is a social conscience. Through his work as a mechanic he is engaged with machinery and industry, which have historically threatened the natural world, but he is troubled by society’s disconnection with the environment. 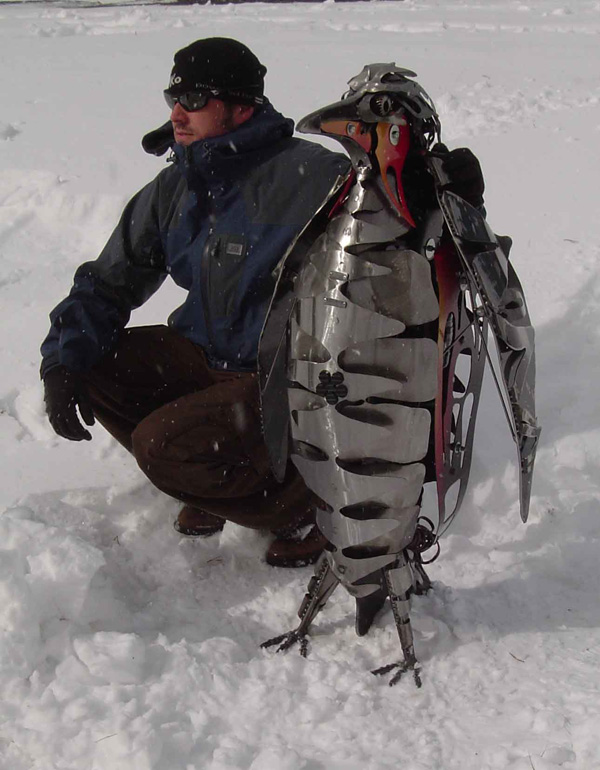 Wilson the penguin was created by Cole to raise awareness of the fact that more than half of the world’s penguins are in danger of extinction. On permanent display at the Point Reyes Bird Observatory in Petaluma, CA, Wilson’s wings gently flap. 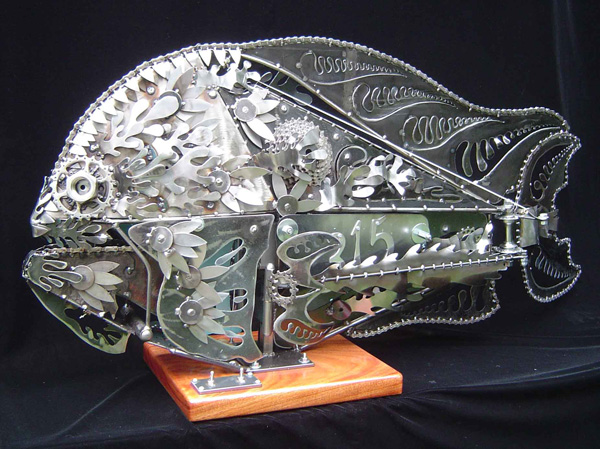 Odge, above, is made of cut steel and an electric motor and light. The tail and mouth operate on a pulley system; the fins utilize linkage. You can see both Odge and Condor at the reopened Ripley’s Odditorium in San Francisco, where they are on permanent display. 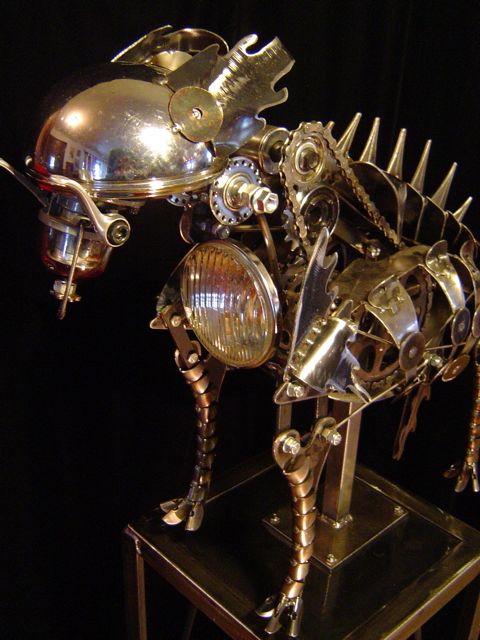 Cole’s fascination with physics, gravity, motion, light and space might not ordinarily sit well with a desire to slow down the inexorable effects of the industrial revolution, yet he claims his work “considers a regression from mechanism back to organism.” 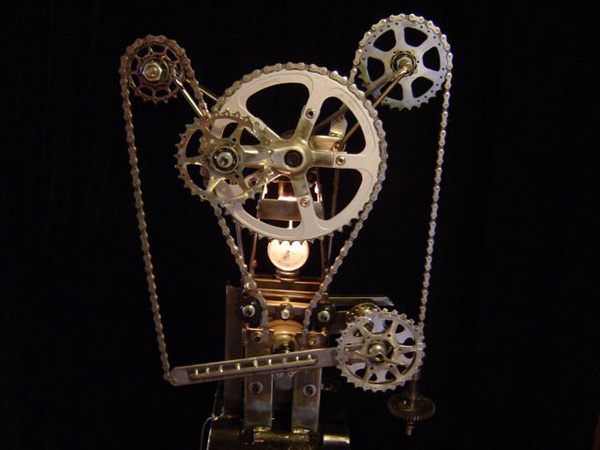 So, while his sculpture is informed by physics and influenced, as he puts it, by “the visionaries of the industrial revolution,” that it makes uses of the detritus of that world to create symbols of nature is a comment on the need to refigure the way that the two spheres, the mechanic and the organic, align. 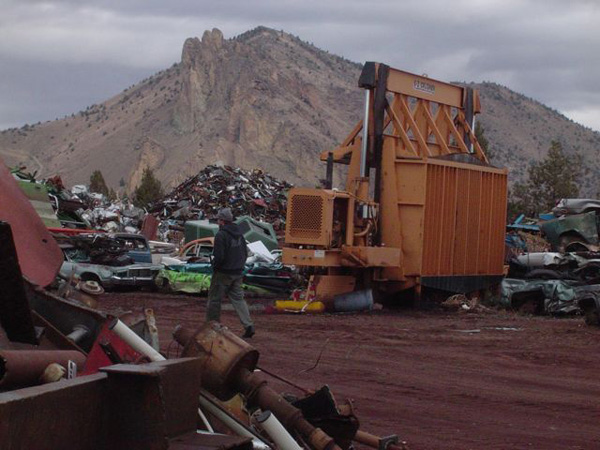 Perhaps this “measured balance,” made of found steel and bicycle parts, and containing a motor and light and working movement meter, hints at how this can be best achieved. Thanks to Chris Cole Designs for the images in this article. Visit the website to see the sculptures in action.