Despite a statewide plastic bag ban not passing through the California state senate, Los Angeles County is moving ahead with its own ban, set to debut in 2011. 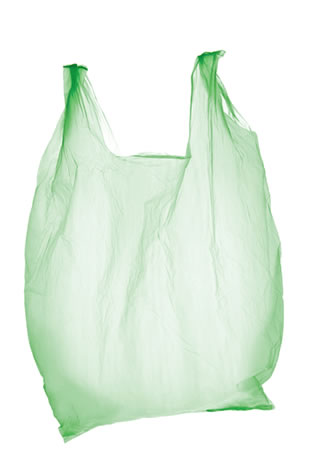 It’s no secret that plastic bags are harmful to the environment. Environmentally conscious shoppers already carry around tote bags when they head to the supermarket. Now, California environmentalists are working to ban the plastic bag across the state and in major cities. In August, the California Senate voted on a statewide plastic bag ban that rallied the support of Gov. Schwarzenegger, but the ban did not pass. Still, the Los Angles County Board of Supervisors voted on November 16 to ban single-use plastic bags in unincorporated Los Angeles, according to The LA Times. As you may suspect, not everyone in Los Angeles County is behind the ban. Plastic bags will still be available in the produce section and the meat section to prevent contamination, but shoppers won’t see single-use plastic bags at the checkout counter. Paper bags and some recycled plastic bags will be available to customers for a fee of 10¢. The ban will appear in phases, with the first changes beginning in July 2011. There is confusion over whether the 10¢ fee is considered an industry tax, since an industry tax requires a two-thirds winning vote instead of a majority vote. The County Counsel says that the collected fees will stay with the grocers rather than going to a government agency, which means it isn’t an industry tax. While Los Angeles County may be the largest U.S. territory to usher in a ban on plastic bags, it isn’t the first to do so. In California, Malibu, San Francisco, Palo Alto and Fairfax have similar bans in place. Instead of banning the plastic bag, Washington, DC, charges a 5¢ fee per bag. China, Mexico City and Bangladesh have also banned the plastic bag, according to Heal the Bay, a Santa Monica, CA, environmental group. Cities within LA County, including Santa Monica and Los Angeles, have similar bans in the works, but none have passed yet. The recently passed LA County ban raised some issues with the proposed ban in Santa Monica. In the Santa Monica ban, single-use plastic bags would not be available to customers, and paper bags would be available at a charge of 20¢. Some residents are upset about the ban, saying they reuse plastic bags for picking up pet waste and for garbage bags within their homes. According to Heal the Bay, LA County residents use 6 million single-use plastic bags annually.

Become a bag lady (or man)

Carrying around extra tote bags can come in handy. Soon, for LA residents, it will even save you some money. Although the charge for paper bags is minimal, purchasing or repurposing a tote bag will save your dollars in the long run. Why get a plastic bag at CVS when you’re only purchasing gum and vitamins? Get used to saying, “No, thank you,” to the plastic bag.