Twelve Mailboxes Made from Repurposed Objects

Some really cool and unusual mailbox designs — all of them made with recycled and repurposed items! 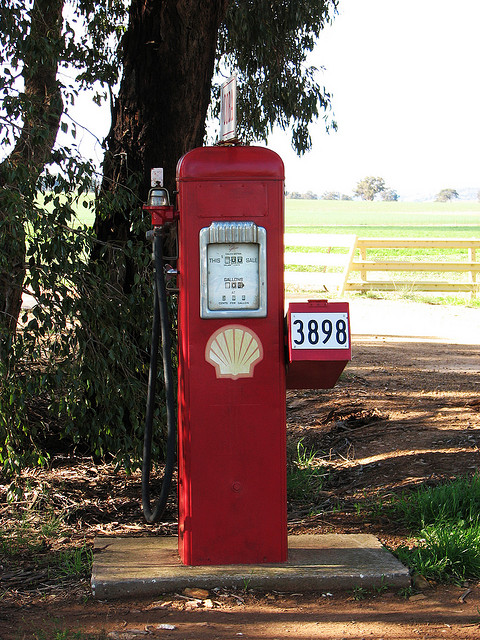 Regardless of whether you call them mailboxes or letterboxes, post-collecting containers are usually pretty boring little things with just one feature: an opening of some description for putting mail inside. Every so often, though, creativity comes to the rescue, paired with an amazing range of recycled materials. We’ve found 12 objects that were recycled beautifully into mailboxes, almost letting you forget their original purpose. 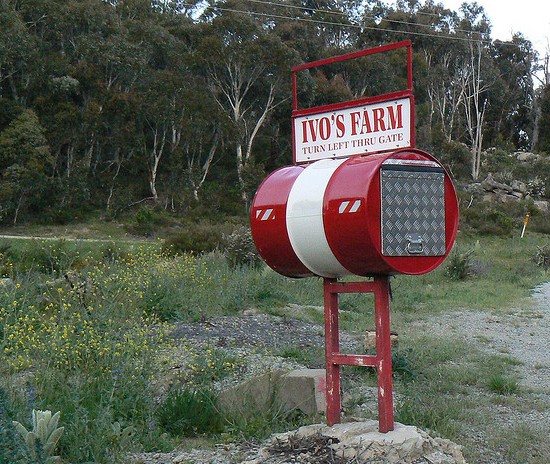 If you’re still expecting a lot of bulky mail even in the electronic age, a mailbox made out of a barrel may not be a bad idea. It’s weather resistant, can be painted any color you like, and can contain a slot or door as big as you need. Perfect! This example was snapped in Australia’s Jagungal Wilderness in New South Wales. 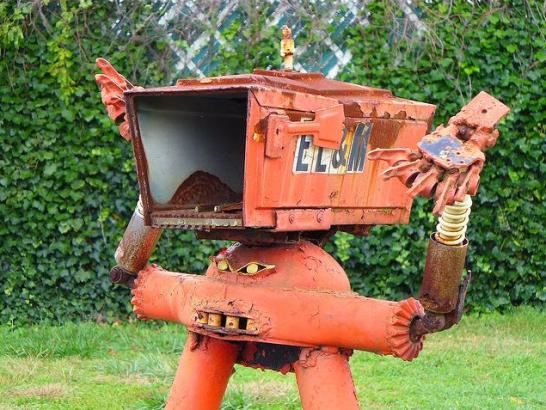 This cool orange crab mailbox was created from old auto parts and fittingly is the mailbox of an auto parts and recycling service in Hammonton, NJ. Here’s what photographer Serena Thaw had to say about this neck of the woods and the amazing mailbox and the other junk creations you can find there: “On a long, windy road that leads out of Hammonton, there is a junkyard that has become quite a spectacle, and only locals seem to know of it. The owner has created such recycled masterpieces as a ‘heavy metal’ guard dog, a robotic mail box and even a soaring rainbow that arches across the gated entrance. If you look in the weeds surrounding the entrance, you will also find some older projects that have lost their ‘lives’ to the elements.” 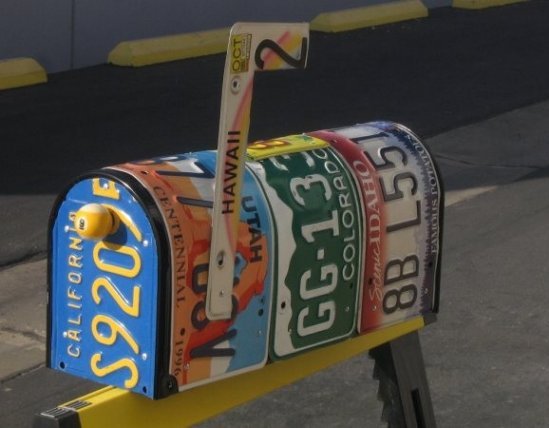 Los Angeles-based artist Aaron Foster creates (among many other things) mailboxes made out of old license plates. In fact, with 10 years experience under his belt, he is today the “most recognized creator of license plate art in America,” according to his website. At $150 a pop, the license plate mailboxes are certainly not cheap, but each piece comes customized with the license plate of the states you specify, as well as a recycled pool ball as a handle — how cool is that? If $150 is a bit too much for your budget, you could also grab a couple of old license plates and get to work yourself. 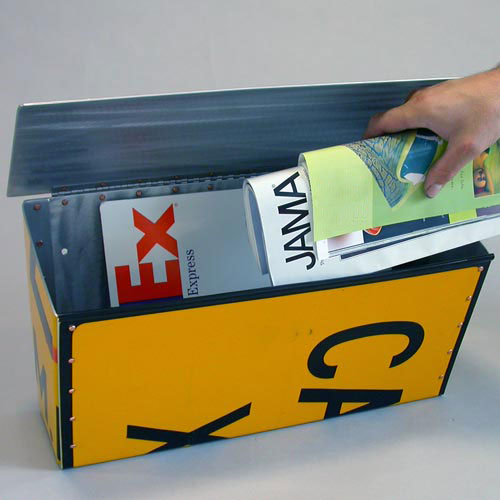 Along similar lines, Rhode Island-based designer Boris Bally handpicks the street signs that he uses for his line of sturdy mailboxes. Each has to have just the right thickness and color and needs to be in decent condition to make it a unique piece. The perfect gift for fans of the road. 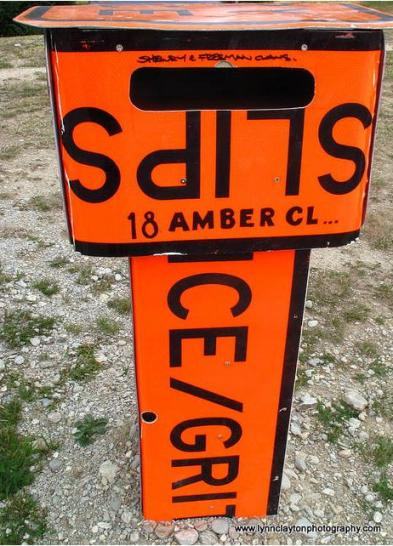 A homemade version can be found on Atley Road in Arthur’s Point, New Zealand, complete with stand. We just love the upside-down “slip” and how the design has been made from old, bright orange traffic signs. 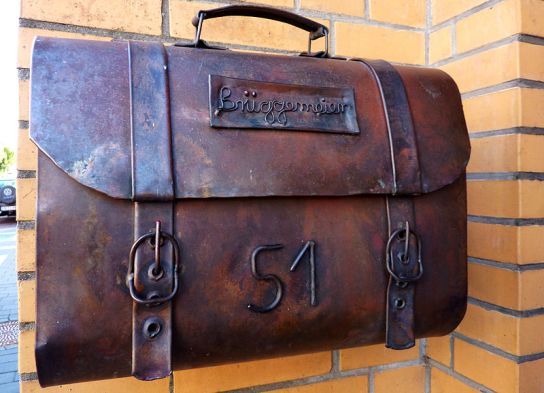 After the Brüggemeier family discovered that their son’s old leather schoolbag was not weather resistant, they recreated it in metal and turned it into a weatherproof mailbox. Very stylish! 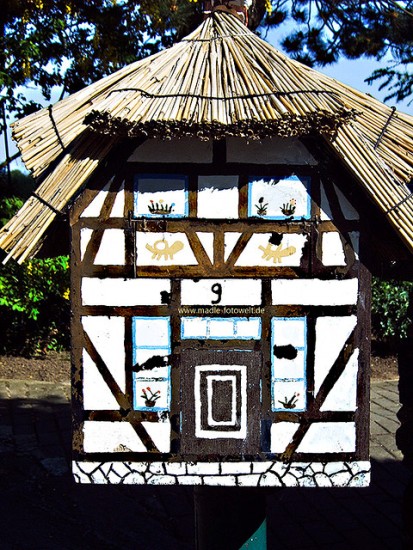 If you happen to have an old birdhouse and for some reason the birds stopped coming or you’re sick of the mess they’re making, why not turn it into a rustic mailbox? This one here, found on the island of Rügen in Germany, on the Baltic Sea, was made with much attention to detail — right from the thatched roof to the little post horns indicating the mail slit. 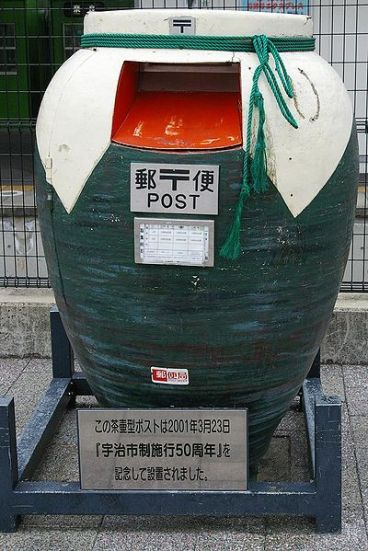 Some countries just seem to have so much pottery that they have to repurpose it. The Japanese are known for their porcelain crafts that can range from the dainty to the huge. In this case, a massive vase shaped as a tea caddy was repurposed as a public mailbox in Uji, Kyoto. We just hope the letters aren’t speckled with tea leaves. 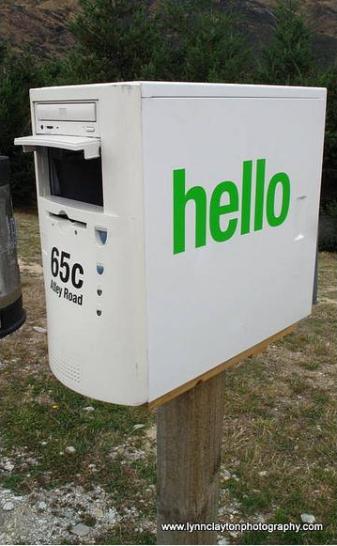 Nowadays, everyone has an email mailbox, but how many people have a computer that works as their mailbox? Not too many, we reckon, though it certainly is a great idea to repurpose your old hard drive as one. One risk may be that the person delivering your letters thinks you want emails only, or you might be outing yourself as a nerd, but hey, no price is too high for the sake of recycling! The CPU mailbox above can be found in Arthurs Point near Queenstown, New Zealand. 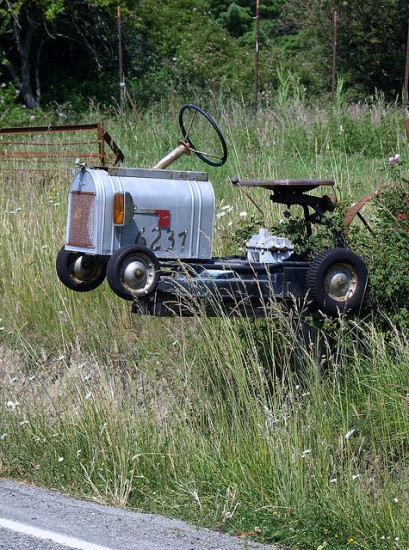 Got an old go-kart that looks like a mini tractor? Why not turn it into a mailbox, complete with a flag indicating whether or not you’ve got mail? Very creative indeed. 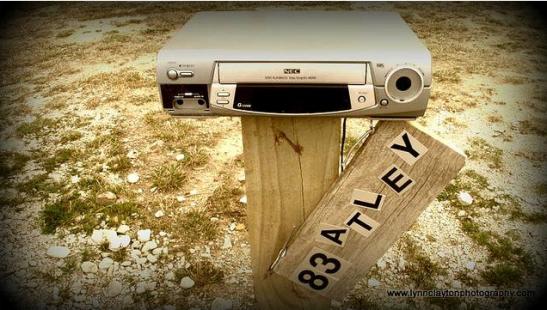 This idea is as simple as it is pure genius. Now that VHS players have definitely become useless with the much sleeker DVD and MP4 players around, what to do with the old machine? Just leave them as they are, attach them to a pole and, voilà, there’s your letter box, complete with built-in slit. This marvel of mailbox design can also be found — you guessed it — on Atley Road in Arthur’s Point, New Zealand. 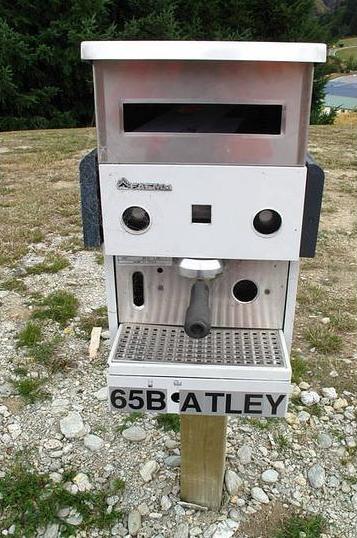 At first glance, an old espresso machine would not necessarily come to mind when thinking about what to use as a mailbox. But seeing the finished product (also to be found at Arthur’s Point, New Zealand!) has us agreeing quickly that it’s just perfect. The holes, the metal tray and the slit — and the way they all form some kind of robotic face — are a winner. We’re wondering if that handle is still working. Would that be mail with foam or without? A real classic that almost made it to #1. 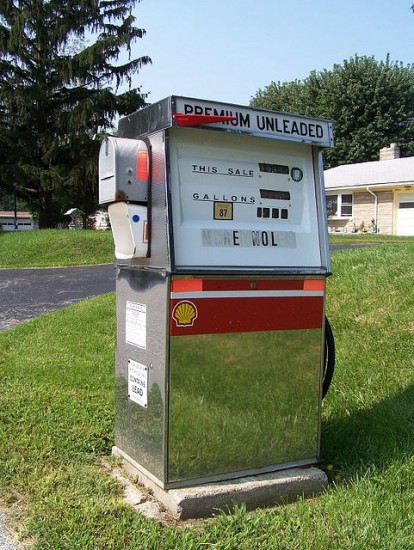 You’ve got premium unleaded mail! We love this clever use of an old petrol pump but unfortunately don’t know much more about it other than that it’s located somewhere in Kokomo, IN. The idea actually doesn’t seem as uncommon as one might think: We found another petrol pump mailbox, also worthy of the #1 slot, pictured top, which can be found in Australia, somewhere near Burrangong, New South Wales. Awesome stuff! It really wasn’t easy to compile a best-of list here; we wouldn’t mind having any of these cool recycled mailboxes at the office. It just goes to prove that with the right kind of idea, anything can be repurposed and given a new lease of life. Sources: 1, 2, 3