The Five Largest Mosaics Created Out of Everyday Objects

Saimir Strati really has nailed the art of recycling everyday items on a truly grand scale! 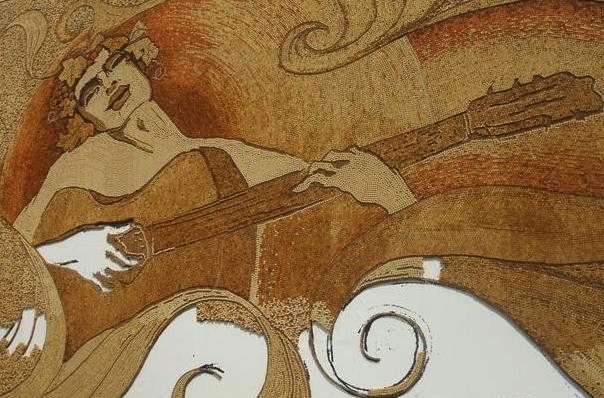 All images courtesy of Saimir Strati unless otherwise indicated.

When Saimir Strati decides to make a new mosaic, you can be sure that it will be extraordinary — and perfect. Using a wide variety of everyday materials, such as screws, nails, bottle corks, paint brushes, toothpicks and more, Strati gives new meaning to these common items — and to the term meticulous. 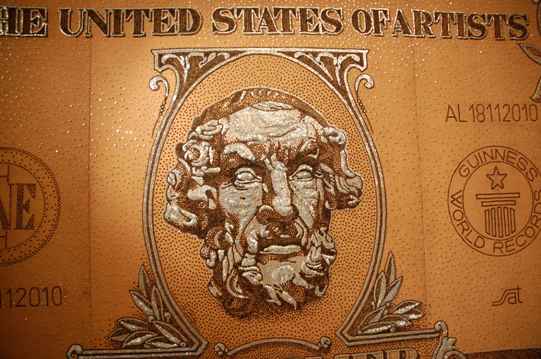 To date, he has managed to achieve five Guinness World Records for the largest nail, toothpick, cork, paintbrush and screw mosaics, in 2006, 2007, 2008, 2009 and 2010, respectively. He finished his latest project just a few days ago and was kind enough to share some brand new images with 1-800-RECYCLING. 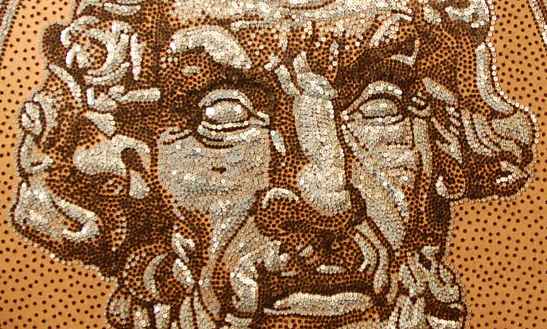 Using more than 300,000 screws, Strati created a 16-foot x 7-foot-10-inch bank note, his “Currency of the Soul.” Modeled on a $1 bill issued by the United States of Artists, it’s a One Homer note. Don’t think The Simpsons, though; think the great Greek poet who is portrayed in the center. Strati’s motto, “In Art We Trust,” rounds off the incredible mosaic. 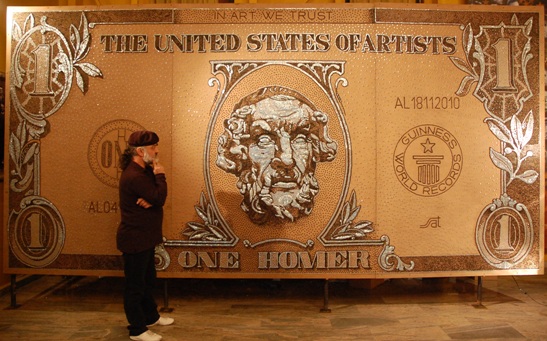 Another striking feat is Strati’s nail mosaic depicting the Italian Renaissance painter and inventor Leonardo da Vinci, which won him his first Guinness World Record for the largest mosaic of its type ever, in 2006. Strati created the nail portrait over 24 long and labor-intensive days. He used more than 500,000 nails, weighing more than 880 pounds. 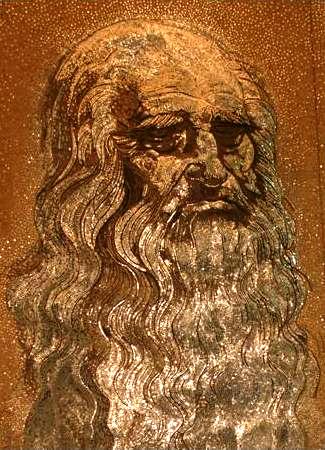 Although he holds Guinness records for mosaics in five consecutive years, Strati is not in it for the fame. Rather, his artistic skill has finally found the outlet it deserves. Classically trained, Strati has restored many important mosaics of the great masters at the ancient Greek cities of Byllis, Amantia and Appolonia. By working at these archeological sites, he gained an incredible amount of insight into traditional mosaic techniques, and today combines them with contemporary knowledge, skills and topics. 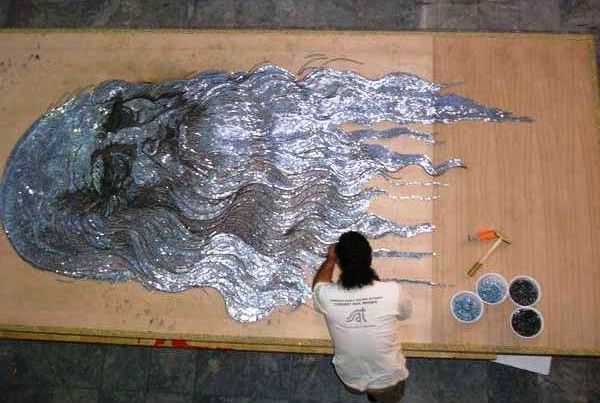 It is this mixture of a deep understanding and appreciation of the craft with his own unique style that makes Strati’s work so appealing. In the case of the da Vinci nail portrait, Strati worked from a simple self-portrait by Leonardo da Vinci. Strati then drew the outlines on his canvas — a 6.5-foot x 13-foot large wooden board. Next, he started hammering in the nails at various depths and in various shades — from silver and shiny to brown and rusty. In the picture below, we can see the artist’s palette: six ordinary plastic containers, filled with nails in different shades. Bet you didn’t even know nails came in different shades; we surely didn’t. 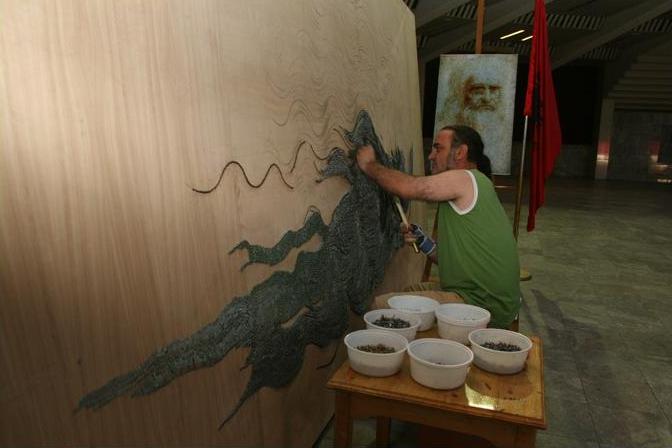 Below is a short video that offers a glimpse of the process. The classical music in the background is no coincidence: Strati is a music lover who listens to whatever inspires him and suits his motifs when working on a piece.

One can think of Strati as a kind of super computer who draws in 3D: each head of a nail, each cork and each toothpick represents a pixel, with the placement of each clearly mapped out in Strati’s mind. But, unlike a flat computer image, Strati adds depth by applying a relief technique, with amazing results. Incredibly, every world record attempt by Strati has also been a live performance, either inside a hotel or outside. While Strati works his 12-hour days, the public is invited to watch. The canvas for his thrilling paintbrush mosaic, his 2009 record in tribute to Michael Jackson, was mounted on the side of a truck so that it could be moved around. 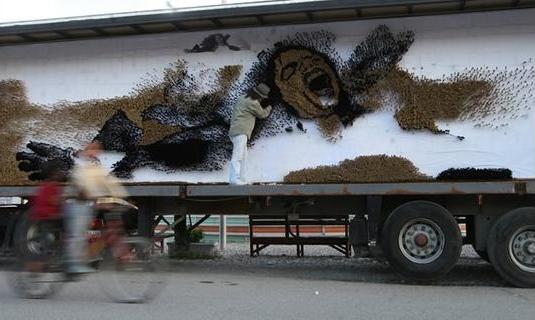 When working, Strati hardly does anything else or takes a break. For the Michael Jackson mosaic, he used some 230,000 paint brushes of various sizes and colors, and worked for 28 days straight — all 16-hour days. The result was well worth it.

The mosaic below, depicting a horse, is called “Reinless Spirit” and brought Strati the Guinness World Record for largest toothpick mosaic in 2007. It took 40 days and more than 1.5 million toothpicks to make. Strati used toothpicks made out of different woods and in different lengths to achieve the desired shading and depth.

Still, how could this… 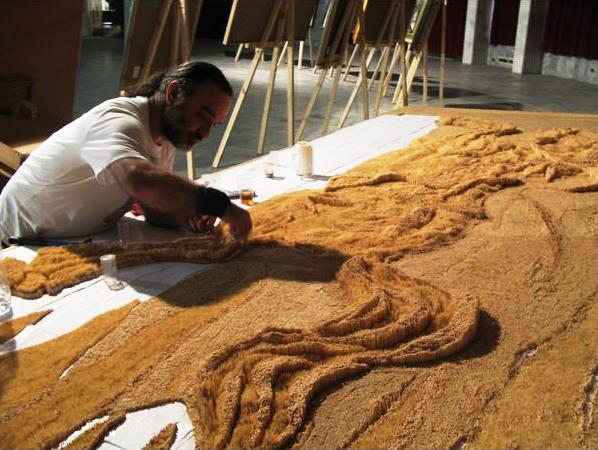 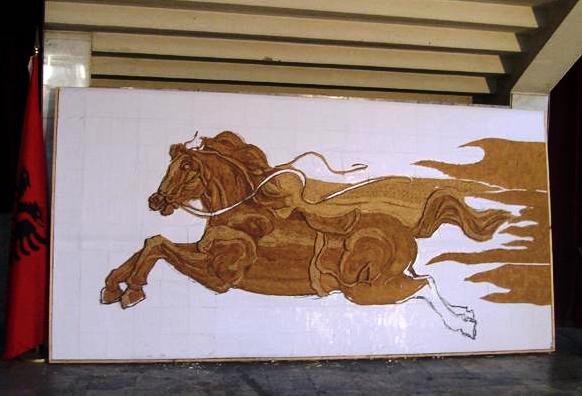 Despite the efforts of others to keep a close eye on the artist, Strati’s works seem to appear as if made by magic. Just how exactly he does it will remain a secret because, though his artworks are public performances, nobody can see into Strati’s masterful mind. Finally, let’s take a look at Strati’s largest work to date: his 2008 record winner, a bottle cork mosaic titled “The Mediterranean” showing a young Romeo with a crown of grapes playing the guitar (also pictured top).

How many bottles of wine went into this? 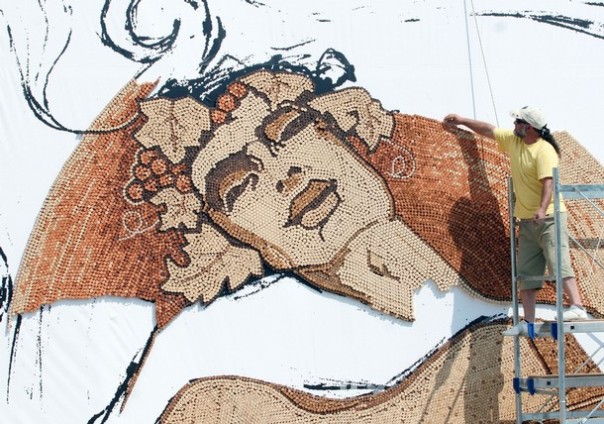 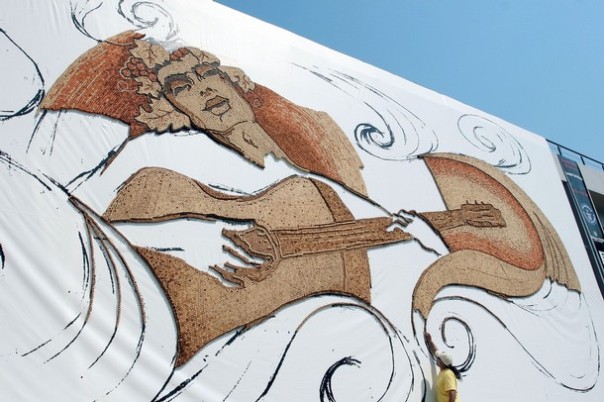 Almost 230,000 bottle corks created this 42.5-foot x 23-foot masterpiece, which took Strati almost a month to make. Considering the sheer magnitude of the work, this time seems quite short, despite Strati putting in 14-hour days. He is just so well versed in the ancient art of creating mosaics that regardless of what material he uses, he can quickly visualize where each piece has to go. 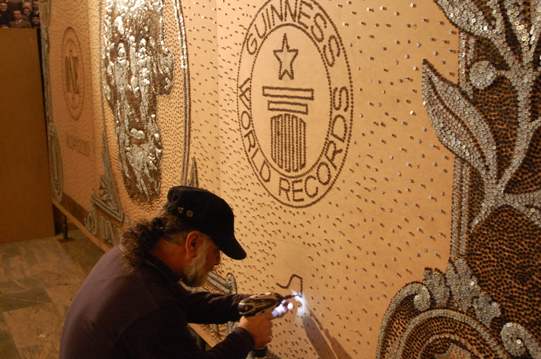 Strati was born on April 11, 1966 in Vlora, Albania, and graduated from Valona College of Arts in 1984. Just five years later, he won the National Award in Applied Arts, and solo exhibitions followed from 1996 to 2005. A year after his last big exhibition in 2006, Strati was ready to tackle his first Guinness Book World Record and hasn’t looked back since. We’re excited to see what he’ll come up with next. For those who understand Albanian, here’s an interview with Strati. His website has more information and images. Special thanks to Saimir Strati for granting permission to use these images for the article. Sources: 1, 2, 3, 4