If you’re looking for art that reminds you of childhood and is easy on the environment, consider Robert Bradford’s sculptures, which are made out of old toys. 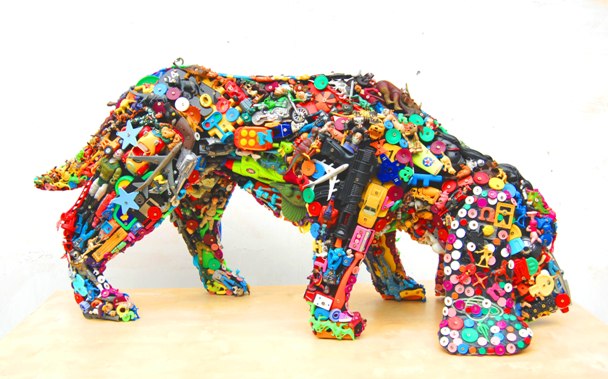 “Sniff One.” All images courtesy of Robert Bradford.

Toy phones, Barbie hairbrushes, Power Ranger figures, alphabet magnets and plastic pistols are the kinds of plastic toys that parents can confirm seem to multiply in their children’s rooms. But what to do when the brats, er, beloved sons and daughters have outgrown them? 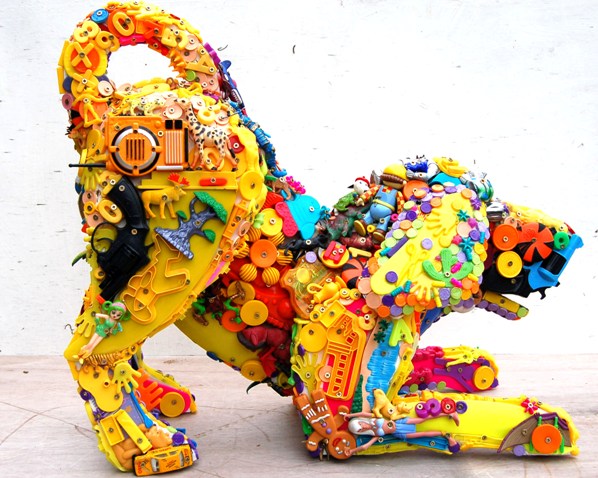 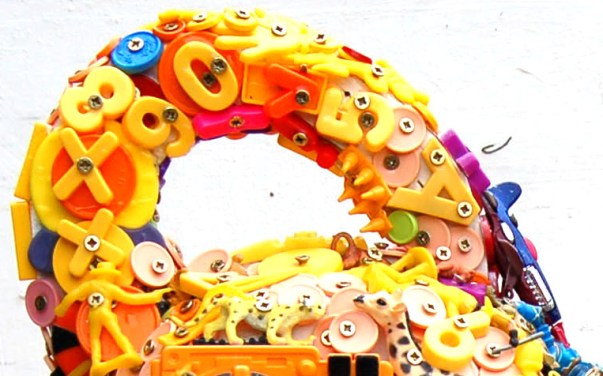 British artist Robert Bradford has found a way out of this nursery dilemma: He recycles old plastic toys into colorful sculptures. Most impressive is his series of dogs, which loyally look at observers out of eyes that were once flashlights, letters or reflectors. 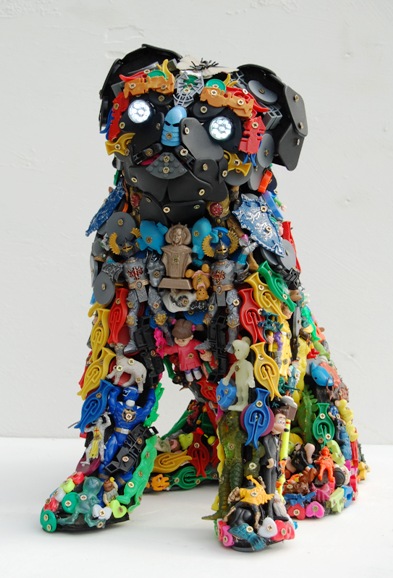 Bradford makes assembling sculptures out of old toys look very easy and sleek, but he’ll be the first to tell you that it’s harder than it looks. 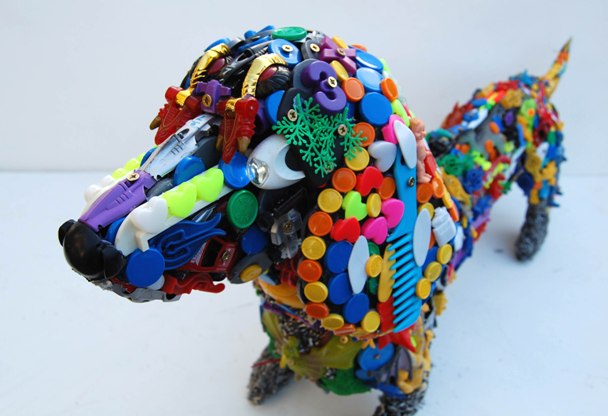 After discovering recycled toys as a medium by accident in 2004, it took two failed construction attempts before the artist — in frustration — drove screws into some of his plastic toys. To his amazement, they did not break. Now, he screws all of the toys into wooden armatures because it has proven to be the strongest and most adaptable method of holding them together. 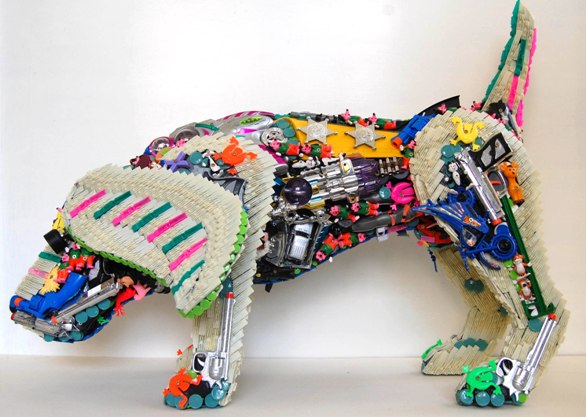 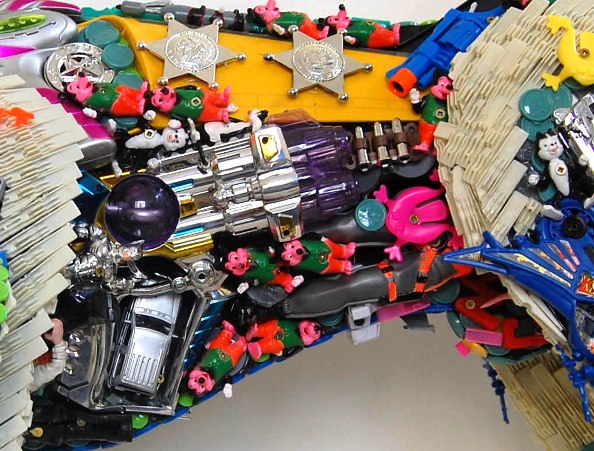 Talking about the use of toys for his sculptures, Bradford says: “For a long time now I have preferred to use materials that are not bland, i.e., have some kind of history of weathering or use… The toys themselves interest me in their own right as mini sculptures by unknown and uncredited artists.”

Can you guess which dog this was taken from? 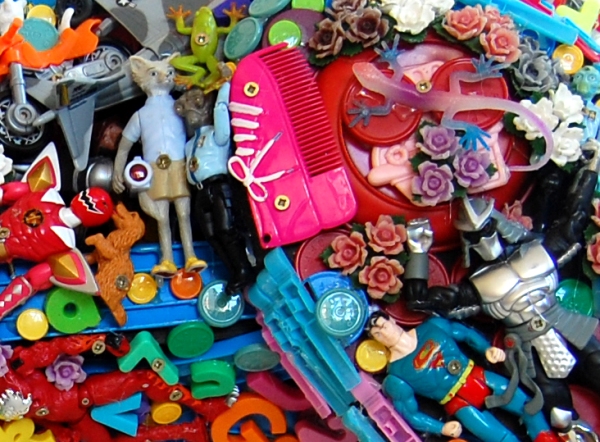 Bradford was intrigued by the random collection of colors, shapes and forms the toys constituted, and sees them as “a moving history of fads and fashions as they pass through the media and our awareness — temporarily significant and then forgotten.” 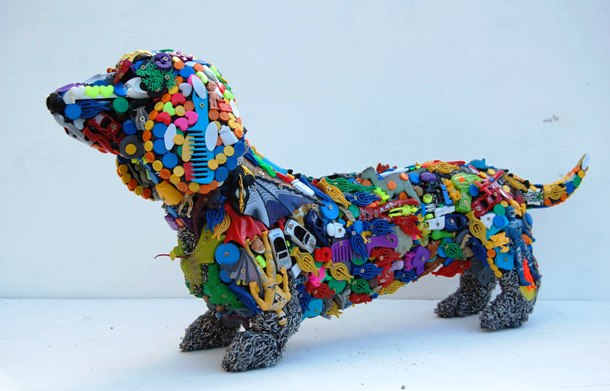 By putting the myriad of shapes and colors into a new context, Bradford provides these old toys with new life and a chance to contribute to a bigger picture that will transport them out of oblivion.

Recognize anything you once owned? 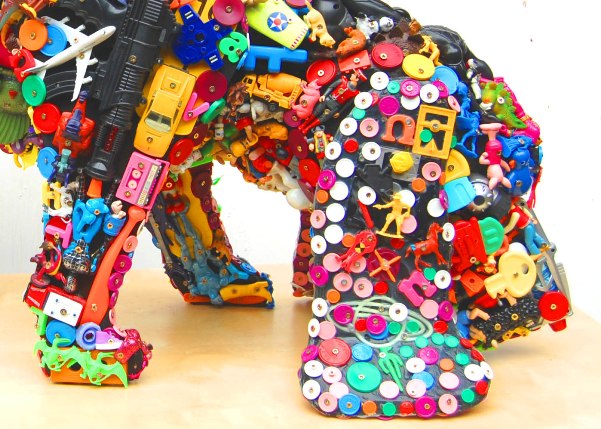 Why dogs, and why so many of them? Bradford’s first canine piece was an Alsatian, and soon more dogs followed. After that, he was approached by dog owners for commission pieces in order to create a likeness — in plastic — of their pets.

Perfect for playing I Spy! Can you find Bob the Builder and a little yellow teapot? 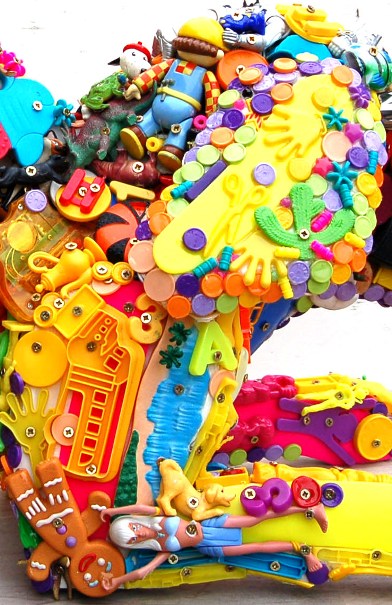 The deep interest in the new toy sculptures lies in the fact that they can be viewed as a whole or as a sum of their parts, giving each individual component credit as well. And it is this intended depth that constitutes our fascination with Bradford’s toy sculptures. 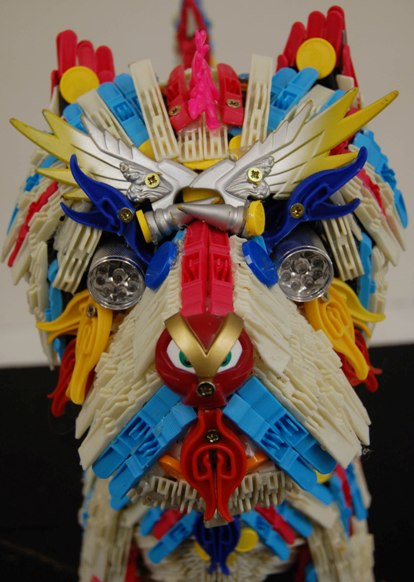 For the artist, the fascination lies in the viewers’ reactions, which, though mainly positive, can range from glee, laughter and fascination to nostalgia and puzzlement, or even rejection as “rubbish.” Bradford says: “There is usually some fascination with the sculptures, the individual toys used and with the process of their acquisition and construction… Often children drag their parents to come and look at the pieces and then a whole sequence of recognition and recollection usually begins, naming the various toys and recalling the times and circumstances of their use.” 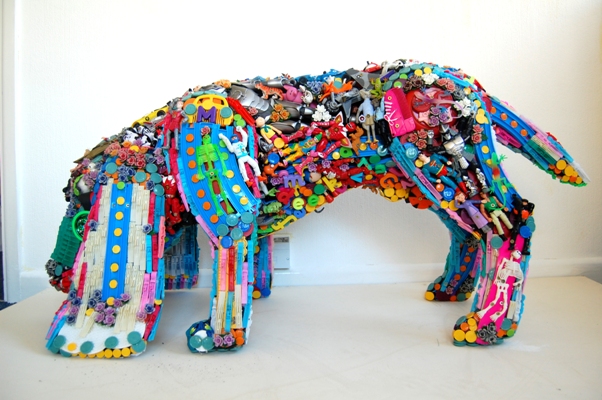 As such, each sculpture is a piece of consumer history that children and adults alike can appreciate. The pieces are so densely packed that one might not realize that one sculpture can contain up to 3,000 old toys. 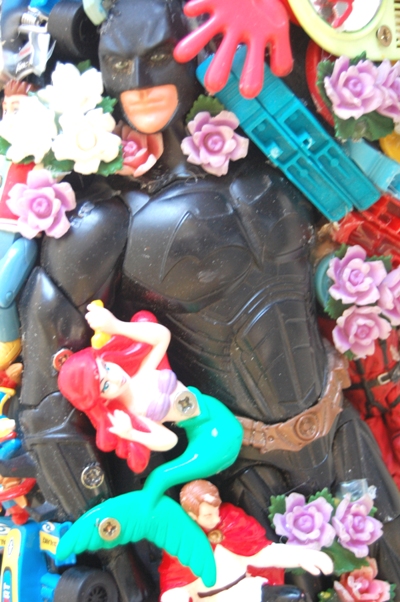 Bradford was born in London and attended the Beckenham School of Art in Kent, England, and was awarded a B.A. in painting from the Ravensbourne College of Art and Design. Bradford then graduated with an M.A. in Film at London’s Royal College of Art. 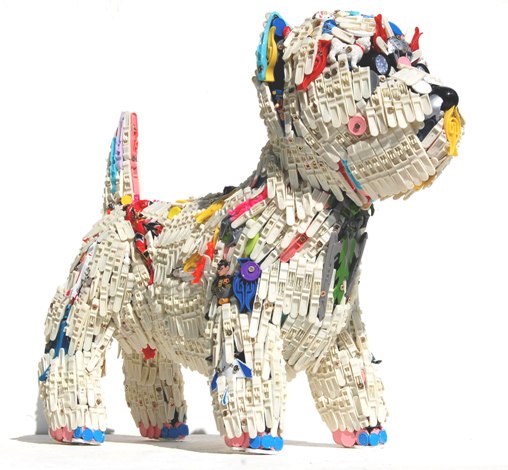 During his nights, he focused on painting, drawing, film, video and photography, while working as a mental health worker by day. A visiting lectureship at the San Diego State University later took him to Southern California for five years. 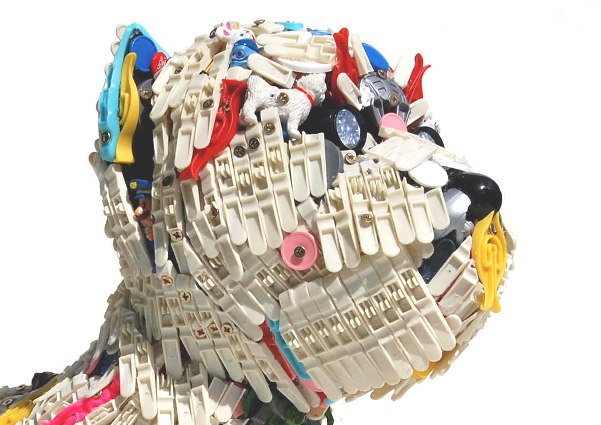 After his return to England, Bradford moved his artistic interest to sculpture, and after coming across a box of old children’s toys by accident one day, started making sculptures out of them. That was in 2004, and since then Bradford’s international fame has consistently risen, with his sculptures now selling for around $20,000 each. 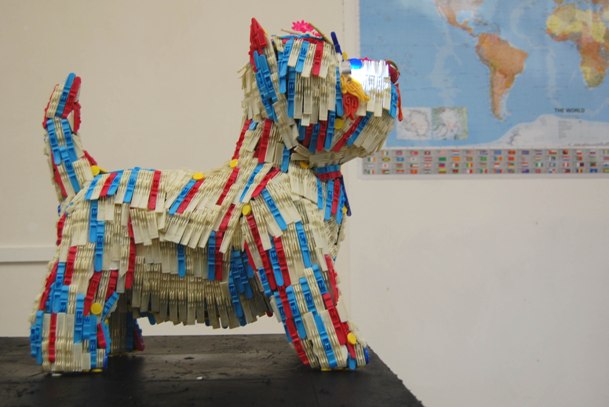 Given that every piece of plastic ever produced is still on this planet today, Bradford really has found an amazingly creative recycling solution for these uncompostable time bombs. Even more amazing 2D and 3D art can be found on his website. Special thanks to Robert Bradford, who, in between exhibitions, found the time to help with images and information. Sources: 1, 2, 3, 4