Created using decommissioned tanker trucks, Big Rig Jig is a marvel in repurposing whose message about man’s precarious relationship with nature has never been more resonant. 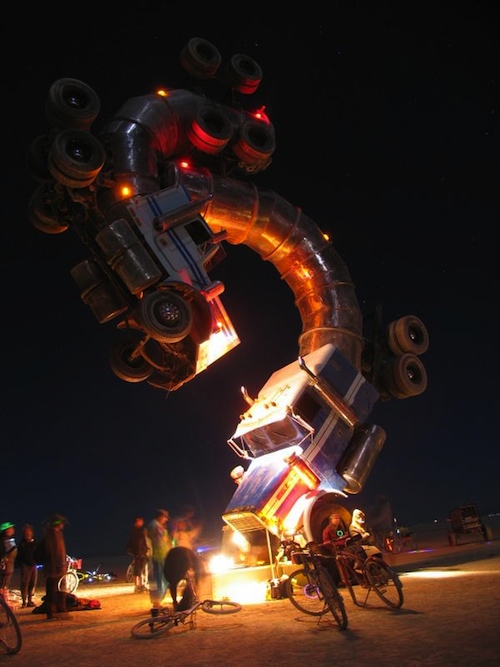 From afar they look like massive, mating dragonflies entwined in a coital bond, or perhaps one scorpion impaled on the sting of another. Even at close quarters, they resemble two mechanical, insectoid monsters, endowed with acrobatic abilities no man-made machine could replicate. Or so one might think. Maybe these twin metal creatures rising out of the desert defy all comparison. Only one thing is certain: The two giant, 18-wheeler oil tanker trucks curled around each other — for that is what they are — are a study in delicately balanced equilibrium. Zooming in further, we see that the first truck is positioned nose down in the ground, its body arcing into the sky like the curve of a question mark. Its tail end collides with the similarly arched midsection of a second vehicle suspended in the air, defying gravity as if its life depended upon it. For visitors to 2007’s Burning Man Festival, the world-famous feast of experimental self-expression that takes place each year in Nevada’s Black Rock Desert, this incredible art installation proved to be arguably the highlight of an event never lacking in creative ingenuity. 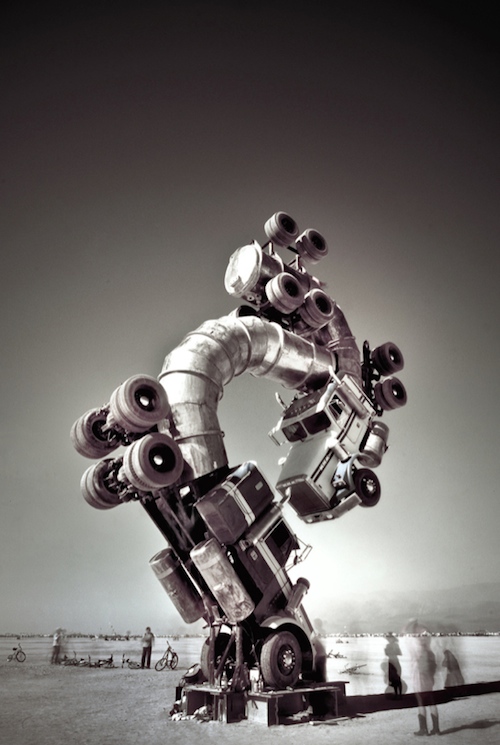 What’s more, this was not a look-but-don’t-touch piece of art. On the contrary, those who saw it firsthand were also able to climb inside the cab of the lower-placed vehicle and clamber up inside the two trucks, exploring the interior of these former road-traveling behemoths of the oil industry — inspecting its dirty crevices, chinks and clefts where nature might fear to tread. This is Mike Ross’ Big Rig Jig, and here’s how the artist describes his monumental, interactive, visually compelling creation: “Big Rig Jig is constructed from two discarded tanker trucks. The work serves both as a sculpture and an architectural space: Visitors may enter the lower truck, climb through the tankers and emerge through a portal at the top. The rear axles of the upper tanker serve as a viewing platform, 42 feet in the air.” 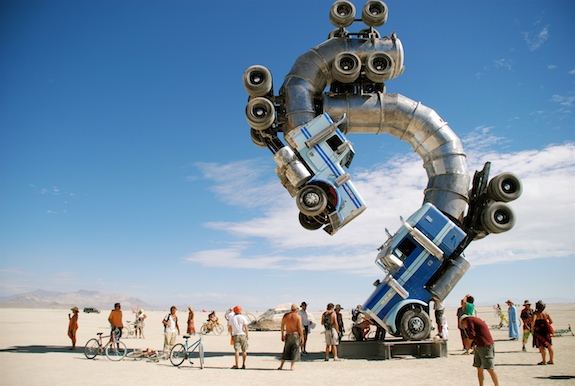 If this towering piece of work instilled a feeling of trepidation in those who stood in its long shadow, crawled through its cramped confines or more foolishly scaled its exterior to enjoy the panorama from the top, then all we can say is that it achieved its desired effect. A bit of fear is a good thing if it opens people’s eyes. “When people stand under it and see a big truck hovering over you, it should give a sense of danger and fear and that something is wrong,” Ross said in an interview with Wired, who correctly conjectured that the piece was intended “to represent the precariousness and danger of the oil economy.” With oil reserves rapidly depleting, this message is as relevant today as it was back in 2007 — perhaps even more so in the wake of the Deepwater Horizon oil spill. 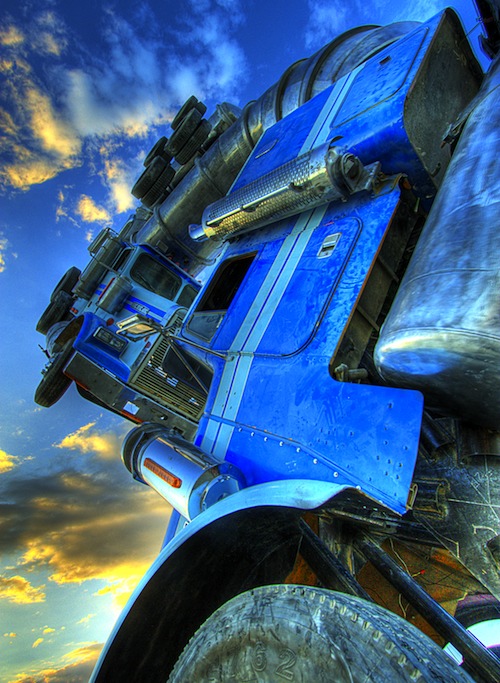 Ross, a Brooklyn-based artist with a mind for design, built Big Rig Jig with a crew of between four and 16 artist friends working out of an Oakland, CA, workspace called American Steel. The retired trucks needed to turn Ross’ concept into a reality were found by the team in the San Francisco Bay area. “We drove the trucks right into the warehouse and started chopping them to pieces,” Ross recalled. But out of the destruction was born creation on a massive scale — with a little help from a grant from Burning Man, plus gifts and donations received from far and wide. According to the artist’s statement, the finished work is “a rumination on power as manifest in the relationship between humankind and nature.” Its vehicular protagonists are a reference to “global industry at the nexus of our world’s political, social and environmental systems. By repurposing these symbolically rich objects, the artist conveys a cautioned awe for humanity’s power.” 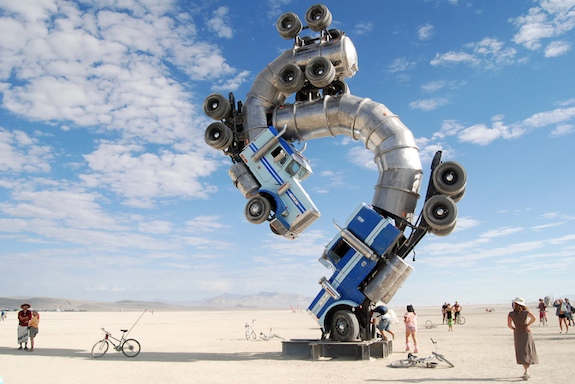 Few tools of the oil industry are as familiar and close to home as oil trucks, so what more aesthetically poignant objects to save from the scrap yard and reuse in order to make an artistic statement? As Ross suggests, man’s embrace with nature has never been an easy one, and now is surely more strained and tortuous than ever before. Does the world’s fate hang in its balance, like two insects at the mercy of a child’s whim? Maybe. What’s certain is that Ross’ sculpture, which is currently “looking for a home,” is nothing short of trucking awesome! Ross divides his time between Oakland and New York City. His sculptures and installations have appeared in festivals and fairs across the globe, and he is currently working on another project similarly massive in scope: Jet Kiss, made from two U.S. Military fighter jets. We can’t wait to see the results. Thanks to Mike Ross and the photographers who granted permission for their images to used in this article. Sources: 1, 2