Pros and Cons of Electric Cars: The Good, the Bad, the Green

Recyclable parts and reduced emissions are great, but what are the downsides to the infiltration of electric vehicles?

Getting from point A to point B is no longer as simple as hopping in a car, stepping on the gas pedal and screeching off to our chosen destination. For those who have ever enjoyed the pleasure of carefree driving, treasure those memories, because we’re living in a very different world where global warming and peak oil have taken front and center. 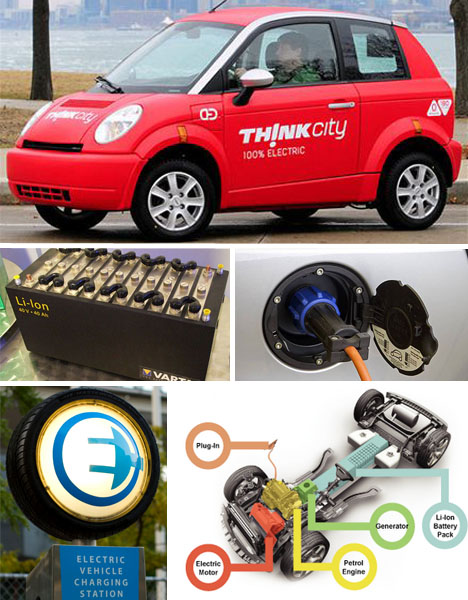 These days, considering the carbon footprint of your vehicle is fast becoming far more important than whether your ride is easy on the eyes or packs a testosterone-laden punch, but convincing the general population to get with the program has admittedly been a tough sell. For a very long time, we’ve been quite comfortable with slick, roomy, gas-guzzling vehicles and yet, given the choice, what consumer in their right mind wouldn’t want a more efficient option, particularly if it takes the burden off of his or her wallet in the midst of a depressed economy? With electric vehicles (EVs), it just so happens that the deal gets even sweeter since Mother Nature catches a much needed break, too. But you want the cold hard facts, don’t you? This must be your lucky day, because here are a few electric vehicle pros and cons to sink your teeth into:

Dependence on fossil fuels reduced Ever wonder just how much oil the U.S. currently uses to fuel its transportation sector? Of the two-thirds that is earmarked specifically for planes, trains and other assorted vehicles, a solid 40% of the petroleum that we consume is reserved specifically for personal cars and trucks across the country. EVs, however, obtain their propulsive power from a modified internal combustion engine or a rechargeable plug-in battery. Decline in greenhouse gas production While our nation’s addiction to oil is well known, what most people don’t realize is that the fuel used to power our conventional vehicles is responsible for generating approximately one-third of America’s greenhouse gas emissions. Conversely, coal-derived electric vehicles still manage to release 25% fewer atmospheric pollutants than mainstream fossil fuel-powered vehicles. Easier on the environment According to a recent study, the largest eco-burden of an electric vehicle stems from the recharging of its battery (especially when the electricity is generated from coal), but EVs still fare better on the green scale than their fossil-fueled predecessors. Cleaner than conventional vehicles Due to their highly efficient motors and electric generators, “total CO2 emissions from a midsized plug-in EV are likely to be about half of those from a conventional internal combustion engine gasoline vehicle.” Fuel savings offset extra electric expense Driving an electric vehicle 12,000 miles annually is said to cost roughly $30 extra each month but yield a fuel savings of $97. No threat to power grid Smart chargers, which strategically bestow EVs with their juice at select times throughout the day, take the burden off of the electric grid, plus solar-powered versions are in the works. Potential recyclability THINK City’s electric cars, which have proven to achieve 68 miles per hour courtesy of their lithium-manganese battery packs, are the very epitome of cradle-to-grave sustainability. From their unpainted plastic body panels and air ducts to their interior fabric and dashboards, engineers designed this highly efficient vehicle with maximum recyclable capabilities in mind.

Tethers drivers to an electrical outlet While household charging stations are a necessary part of purchasing an EV, many users worry that they’ll run out of juice at an entirely inconvenient time. Fortunately, the proliferation of public charging stations should alleviate such concerns — major retailers like Best Buy are even jumping on the bandwagon. More expensive than conventional vehicles Blame the budget-killing cost of the Chevy Volt (priced at $40,280) and the Nissan Leaf (which retails at $32,780 and is equipped with a $15,600 24-kilowatt-hour battery pack) on their respective cobalt-, nickel- and manganese-laden power storage devices. To heap insult upon injury, the battery packs of all electric vehicles — regardless of make or model — must ultimately be replaced. The good news is that it should cost “just” a few thousand dollars to do so. Responsible for power plant emissions Electric-powered vehicles may in fact release no tailpipe emissions, but the energy that they rely on is obtained directly from nuclear, natural gas, hydro and coal power plants — none of which are 100% squeaky clean. Studies have found that EVs “can result in more local air pollution at the electricity generation source, especially if the source is a coal power plant.” Not as green as one might think A Greenpeace-backed report by Dutch consultancy group CE Delft suggests that the proliferation of electric vehicles will “likely lead to more electricity production from coal, gas and nuclear plants without necessarily reducing oil demand for conventional cars.” Other experts feel that EVs would have to run on compressed natural gas to be far more eco-friendly. Battery technology isn’t ideal Lithium-ion batteries don’t yet have a predictable shelf life and they also tend to suffer performance wise in cold weather as well as when the user cranks up their stereo, air conditioner or heat.