Old ships are far too beautiful and far too useful to send them to the junkyard. In fact, recycled ships can make for some stunning homes! 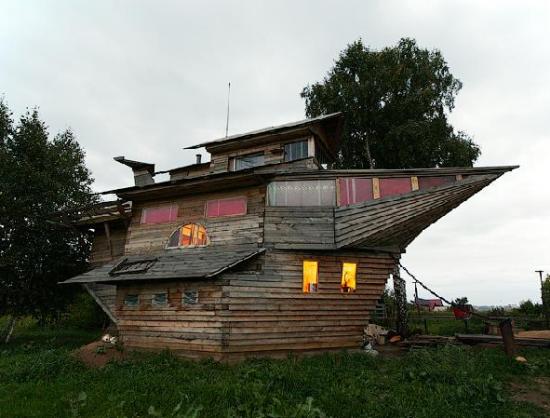 Ships can be floating houses and houses sometimes can be ships. But, if you mix the two and recycle ships into houses, you can expect some unusual and beautiful results. We found seven amazing examples from around the world. 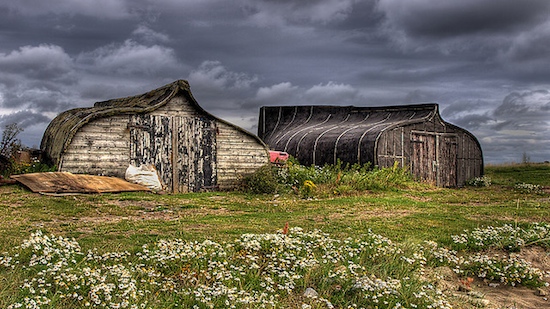 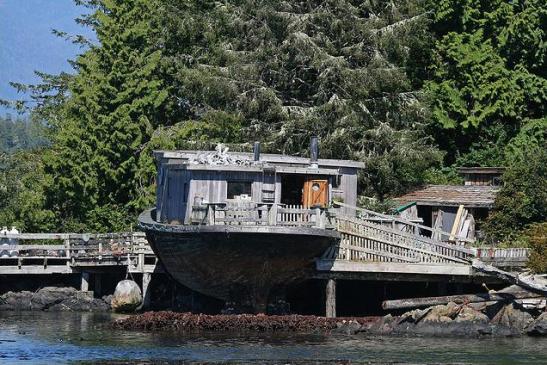 This old boat converted into a house is now permanently docked in Long Beach, Tofino, on Vancouver Island’s west coast, right across from the pub. It belongs to local diver and historian Rod Palm, who has been living in it with his family for many years. It sure looks very homey, and perfectly settled into the scenic landscape. Photographer Clint Rivers explains how the shot came about: “The ‘Boat’ house is on a small island just to the east of Tofino. I sat in a pub and saw it out the window and had to take a pic. Quite the neat way to make a house, and what a nice view they have every night as the sun sets in the west!” 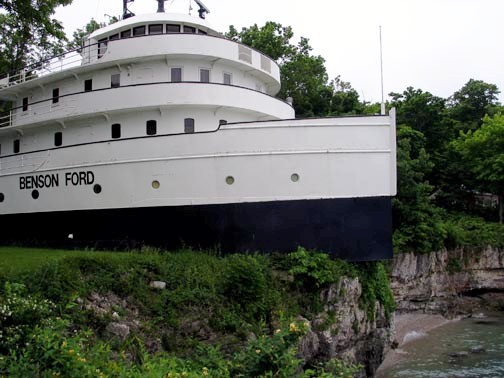 The Benson Ford is a beautiful ship now owned by Bryan Kasper. Having dutifully served on the Great Lakes for 50 years, the ship can now be found towering on a cliff on South Bass Island in Lake Erie at Put-in-Bay, OH. Originally, Henry Ford had it built as his own cruise ship and named it after his grandson. Then in 1986, after it had been stripped of its engine, Frank J. Sullivan bought the luxurious vessel from a salvage company, brought it to the island, and transformed it into a lakeshore residence for his family. More photos can be found here. 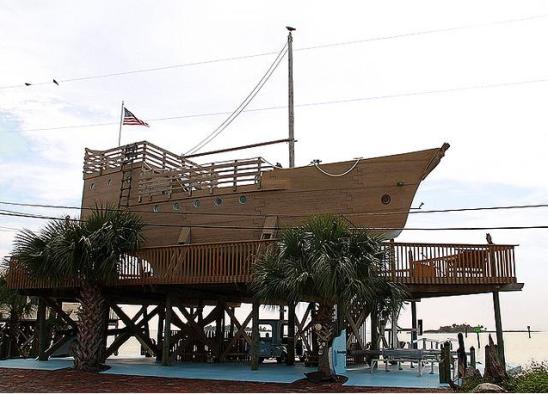 This beautiful ship house, which looks like an adventure playground, actually has a rather sad history. Photographer Michelle Pearson, who lives close by in Cedar Key, FL, says: “What I learned is that the boat was built originally as a boat by a very elderly gentleman. After a group of men went by it one night as it sat there, one of them suggested it be made into a home to one who had bought the lot it stands on. To the surprise of the ‘suggestee,’ the owner bought the boat and made it into what it is now. It has since changed hands, maybe a few times. Besides being a home/vacation house to its owners, it is also a place of rest and view for birds like osprey.” Whoever the owners are now, it is a spectacular house on Horseshoe Beach in Dixie, FL, where it attracts many admirers among beach-goers. 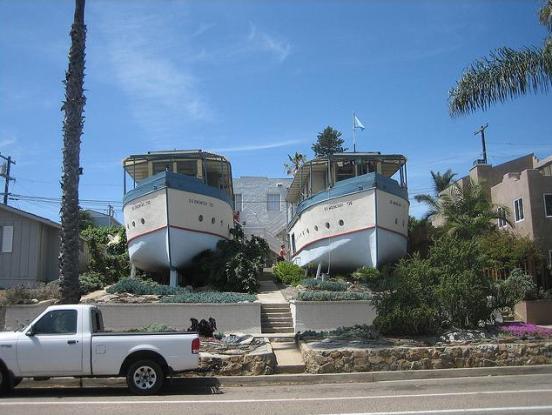 Some people love boats so much that they will even build their homes in the shape of them. These two examples can be found on 3rd Street in Encinitas, CA. The S.S. Encinitas and S.S Moon Light have never touche water (apart from rainwater), as they are neither boathouses nor houseboats — just stunning boat replicas. 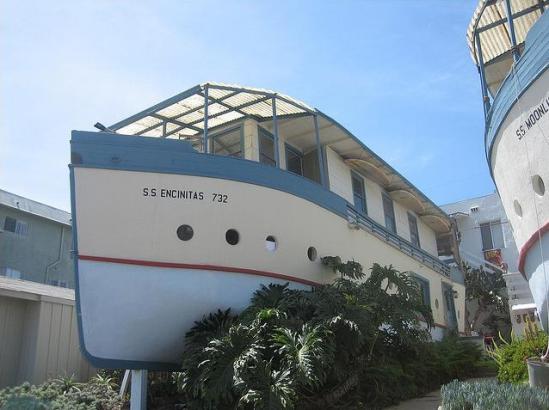 But that’s not to say that these two houses are not recycled. Their creator, Miles Minor Kellogg, was a versatile builder in the 1920s and ’30s who loved taking scrap material and using it for new structures. The wood making up this unique structure was taken from an old bathhouse at Moonlight Beach in 1925. Because of its low ceiling, the wood wasn’t fit for a regular house but worked splendidly for these two boathouses, completed in 1928. 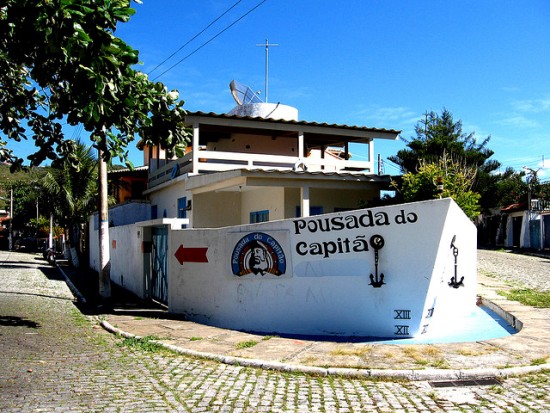 This ship house, called “Pousada do Capitao” (or “Captain’s Lodge”), in Rio de Janeiro’s very scenic Arraial do Cabo Bay, is actually a small hotel. As indicated by its exterior, the hotel’s theme is nautical through and through — from its sextants and life buoys right down to its beach-themed sheets and towels. Fishing can be arranged. 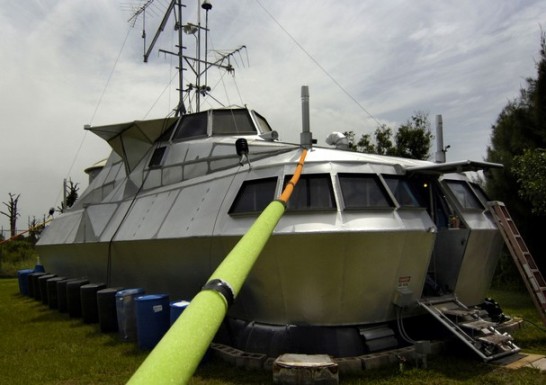 This project to create a hovercraft home began in 1989 and has so far taken owner and former engineer Dennis Schaller 20 years of work. The 56-foot-long, two-story vessel was not only built from scratch, but also from scrap. It is secured by several insulated grounding and tie-down lines. Right behind the bridge on the top floor are the captain’s quarters. 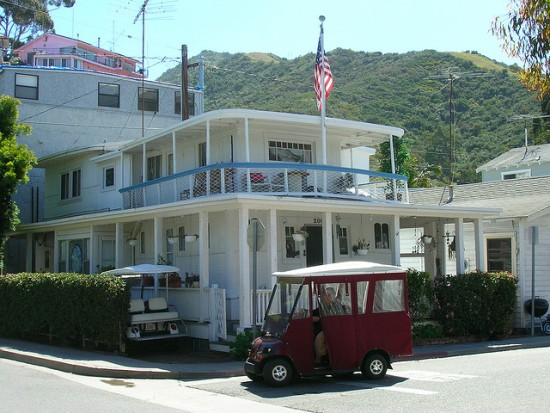 This house on the rocky shores of Santa Catalina Island, about 20 miles southwest of Los Angeles, is made from the salvaged parts of not one but two old ships. The whole top part of the house seems to be the old ship’s bridge, whereas only wood was used for other parts. The whole construction, painted uniformly white, is certainly stunning and very ship-like. In case you’re wondering about the golf carts parked on the site and rounding the corner of the house: these are characteristics of island life, making up the primary mode of transportation on Santa Catalina. 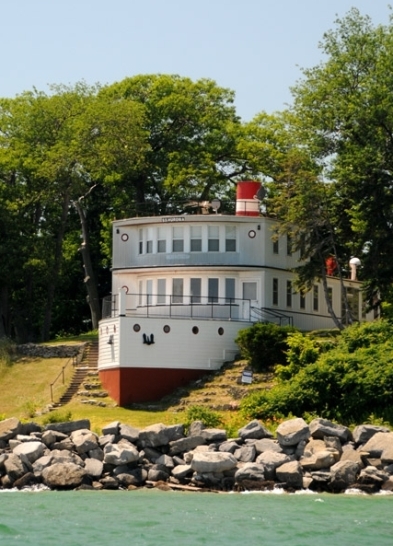 This great ship house majestically looks out over the shores of Lake Huron in Michigan. It stands near Point Lookout, north of Au Gres, and at the time the picture was taken, in the summer of 2009, the unusual house was even for sale. Not for long, we assume. 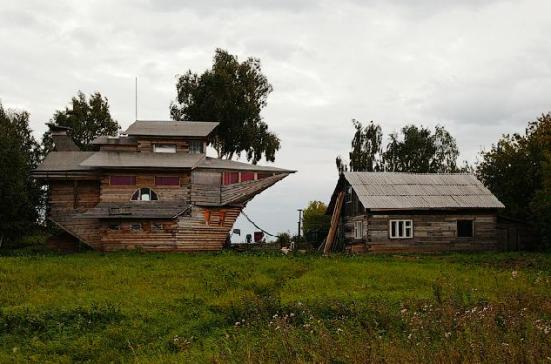 What looks rather like Noah’s Ark is actually a ship house in Borovoy, Russia. Owner and builder Nikolay claims the idea for this 29-foot-high, 45-foot-long house came to him in a dream. He started on July 7, 2007 and constructed the three-bedroom house without any architectural drawings. Since then, it has received much attention — and admiration. 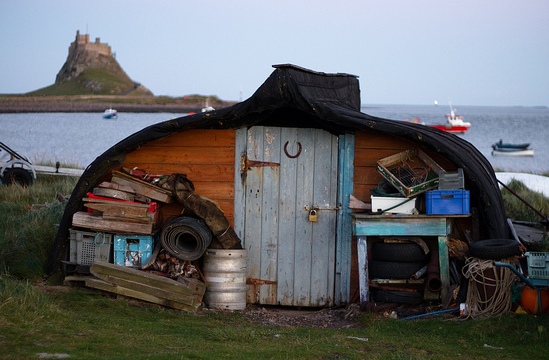 What better way to recycle an old boat than to turn it into a shed that holds the equipment and tools for new ones? That seems to be what the fishermen on the island of Lindisfarne must have thought. They cut their boats into smaller chunks, turned them upside down, added a front wall and, voilà, the perfect shed was born — a home at least for a night if caught out in a storm. 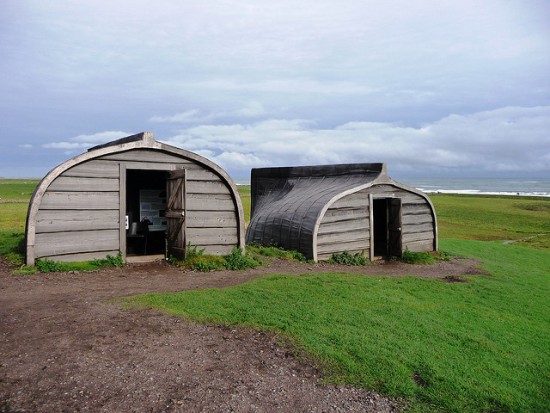 Many of the larger boats were part of the island’s herring fleet, which was retired at the start of the 20th century. Not only is this recycling at its best, but the boat sheds also nicely integrate themselves into the beautiful Northumberland coastline. Far from looking like a fish out of water, with attention to detail and patience, a stranded ship or boat can quite easily be turned into a comfortable and spacious house. Have you seen any that would complement our list? Sources: 1, 2, 3, 4