Robotic Sculptures Made of Old Toys and Electronics

Old toys, broken electronics and recycled materials never looked so cool as when made into hybrid, robotic creations by artist Italian Andrea Petrachi. 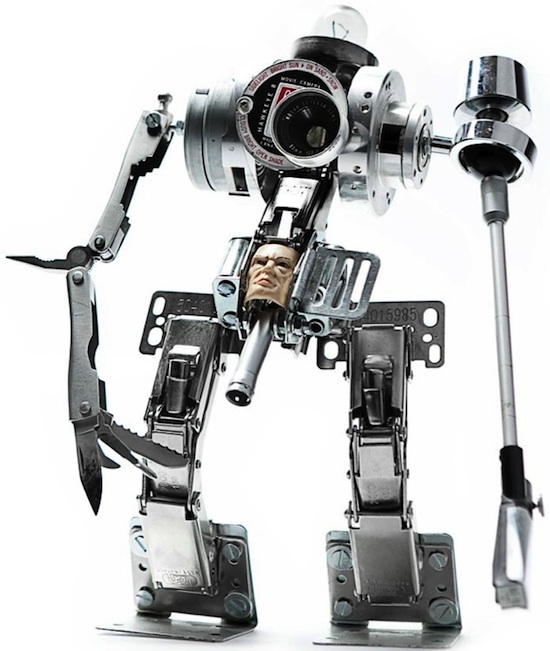 Bizarre dolls’ heads peer out of the crevices of old electronic items — combined, cyborg-like, with camera lenses, kitchen appliances and more. Anyone who has ever seen Toy Story might be reminded of the nightmarish mutant toys that appear in the movie, though maybe these creations are more incredible than creepy. Italian artist Andrea Petrachi, aka Himatic, creates amazing robotic sculptures. This idea might not seem so extraordinary, but what is exceptional is not only the fact that they look so amazing, but also that no household electronic is safe from the artist. Old shavers, mixers, radios, VCRs and even microscopes and cameras are turned into amazing robo-toys when they fall under Petrachi’s creative gaze. 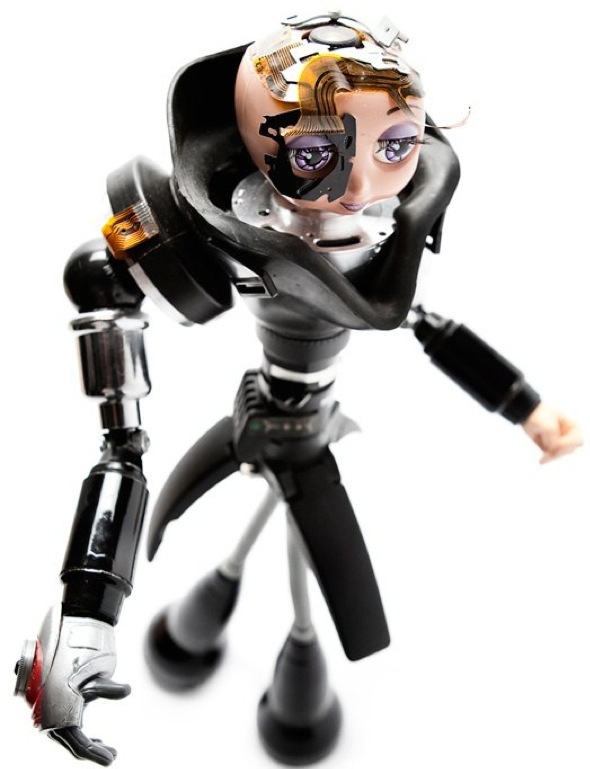 And there are more where that came from… 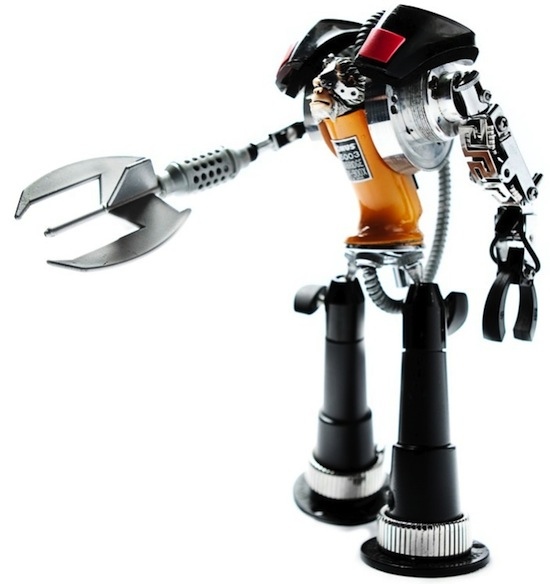 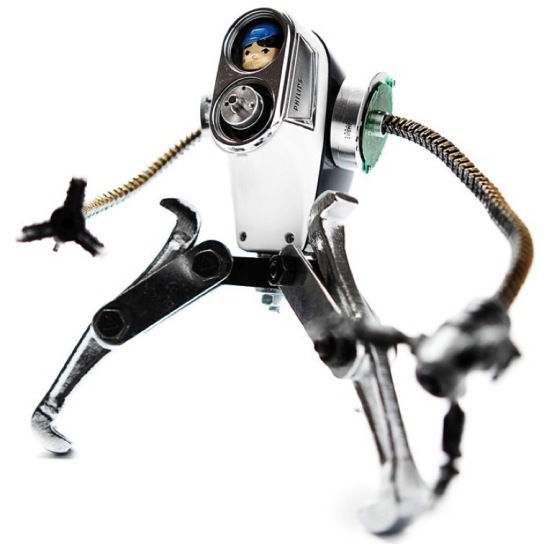 Half the fun of looking at any of Petrachi’s junkbots is trying to figure out what they are made of. Was that hand once a Swiss army knife? And are those legs really egg beaters? We can wonder at the creativity of mind that can make the most unusual of connections and turn our electronic junk into something new and mind-blowing. 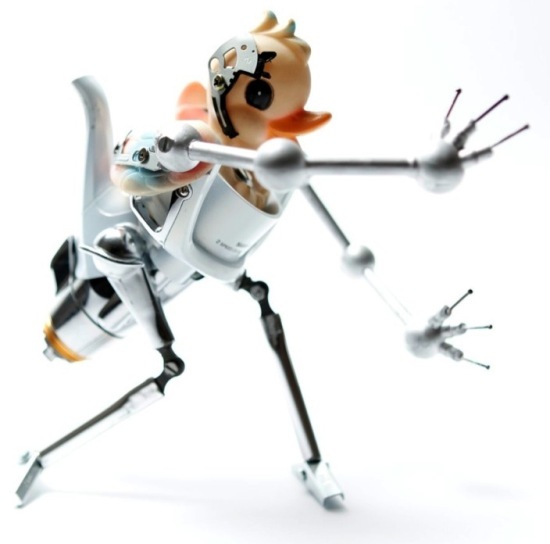 It is no coincidence that Petrachi uses objects that others have thrown away because they simply don’t work anymore or because the next gadget has come along. Petrachi is interested in the rejects of our consumerism and furthermore makes them look back at us with chirpy, sad or revengeful eyes. 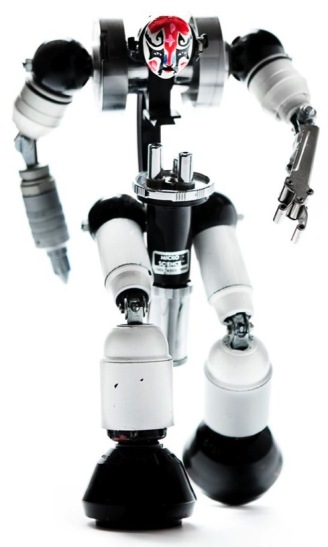 In a statement on his website, the artist says of his creations and motives: “Himatic sees his work as a symbol of our out-of-control desire to buy things, a celebration of the human desire to challenge nature through technology.” 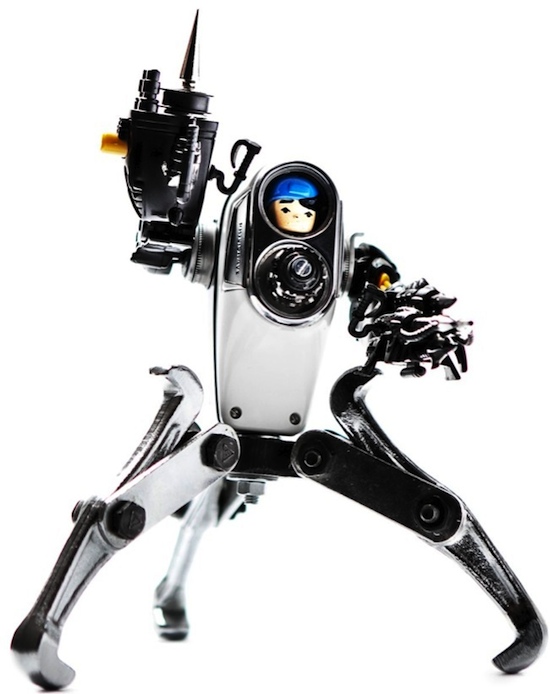 Bizarre creations like “Buzzmeeks,” “Konus,” and “Hawkeye” (top) remind us of the dark side of robo toys — sinister-looking guys with grim faces and odd-looking appendages that might not always be helping their fellow toylings but rather creating mayhem wherever they can. 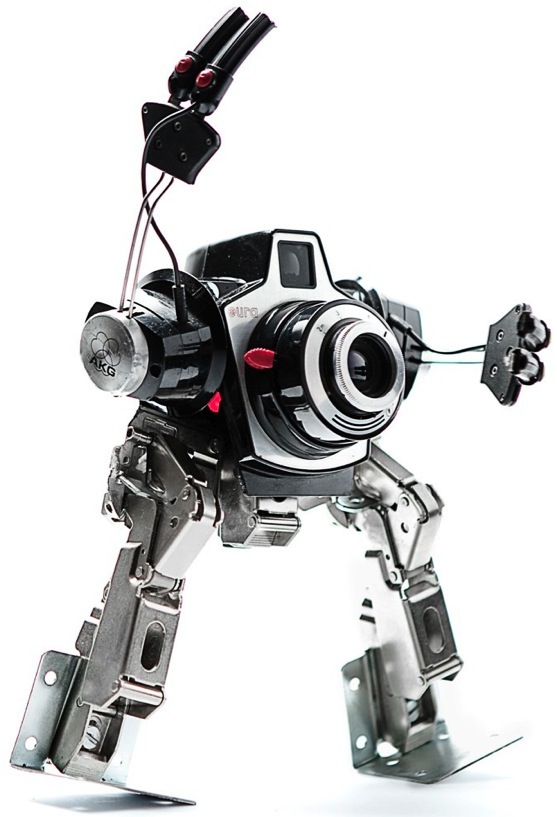 Combined with friendly doll faces and hands, we might attribute creations like “Eeviac,” “Christiania” and “Aiko” a cheerful disposition. But then, even Chucky was once a cute little doll… 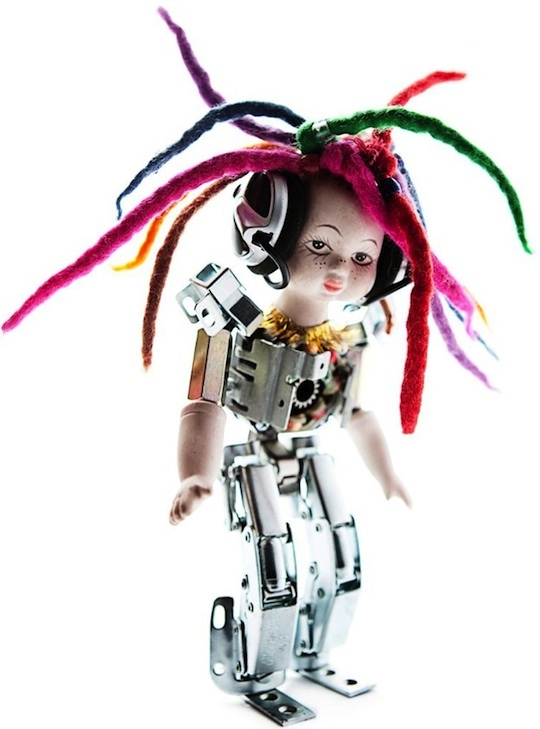 Apart from being made of various pieces of hardware, electronics and headphones, “Christiania” is a creation with Pippi Longstocking freckles and colorful felt dreadlocks — the latter and her name perhaps a nod to Copenhagen’s Freetown of the same name, located in the suburb of Christianshavn, where an alternative lifestyle has ruled since 1971. 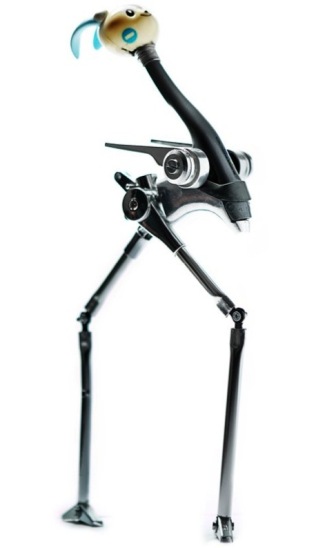 Two favorites are “Swami” and “In-secto” — the former a robotic roadrunner incarnate made from a bike brake, lamp, various hardware pieces and a rubber duck, and the latter, well, just the coolest junkbot you could ever assemble from an old electric shaver and a beaten-up umbrella. Maybe mechanical insect rule is coming… 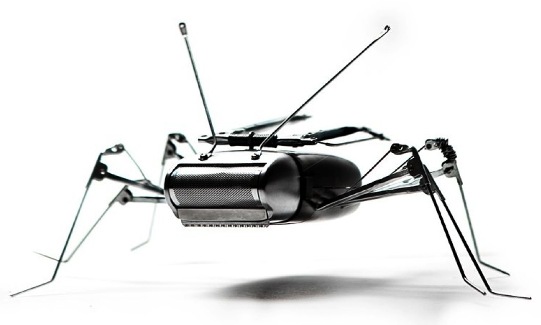 Petrachi was born in Lecce, Italy’s southeastern tip, in 1975. Though the “Florence of the south” sure had its charm, Petrachi was drawn to electronics from an early age and soon started disassembling them. The self-taught artist is today based in Milan, where he works as a video editor for Italian TV channel RAI. If you want to catch Petrachi’s robo sculptures live, you can do so at two exhibitions in the New Year: at the Contemporary Arts Center (CCCB) in Barcelona, Spain, until January 9, or at Techfest 2011, Asia’s largest science and technology festival, in Mumbai from January 7 to 9. Special thanks to Andrea Petrachi for granting us permission to use his images. Sources: 1, 2, 3