When Bat ArT Error carved an incredible bas-relief into the layered paper blocks of an old billboard in Berlin, the group created an work of art highlighting the wastage of posters.

All images courtesy of Antonia Schulz. Used with permission.

Billboard ads are an inescapable part of modern life and disposable culture, each one strategically placed and designed to catch your attention before you’ve sped off in another direction. The colorful images and bold words combine to make you remember their message, but like the memories they aim to instill in our minds, these posters tend to have a short lifespan. What’s more, in the case of the paper poster billboards, they’re often buried alive — entombed beneath ever-accumulating layers of yet more and more posters. 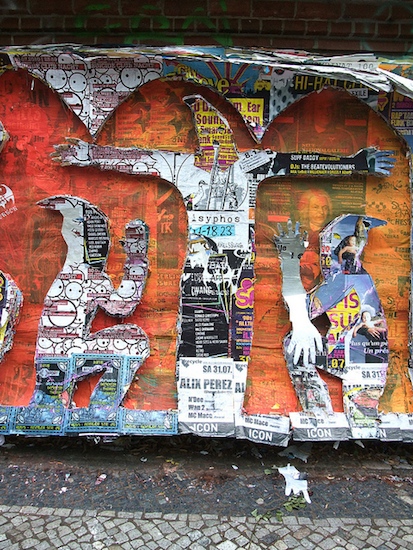 Damp, weather beaten, their edges and corners curling forlornly, these mass graves of old posters are certainly a waste and might often seem an eyesore. Not, however, for French urban art group Bat ArT Error, who saw beneath the bland surface of one billboard site in Berlin’s Boxhagenplatz and found an inspired way to create artistic expression out of the strata of yesterday’s ads. 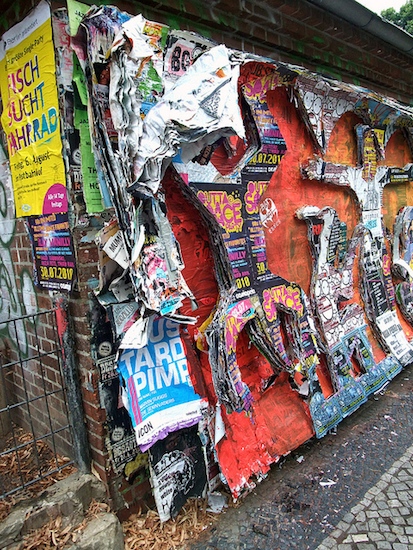 Over three days, beginning in August 2010, a small band of artists put its collective hand to improvising this incredible bas-relief sculpture — giving new depth to the posters from which it was made. “Carved,” according to the artists’ statement, “with a cutter in the consistent thickness of a large billboard,” images of hooded and skull-faced folk in various poses were made to project from the background. 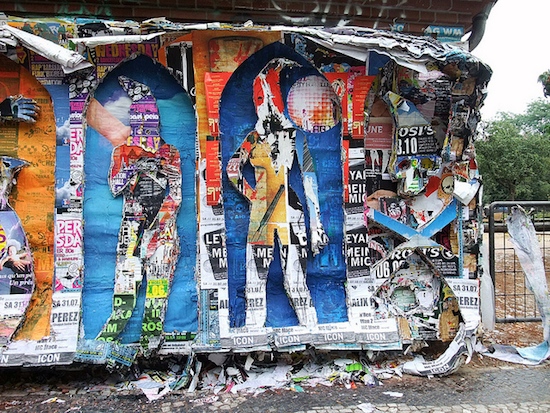 There seem to be a message amidst these human figures — in the letters or symbols they seem to form and the fragmented traces of the old posters — but its precise meaning remains elusive, or lost in translation. That’s fine. Art shouldn’t always need to be explained. What we can interpret is that this is an inspired way of finding a new use for the peeling waste of excess posters piled on top of one another. 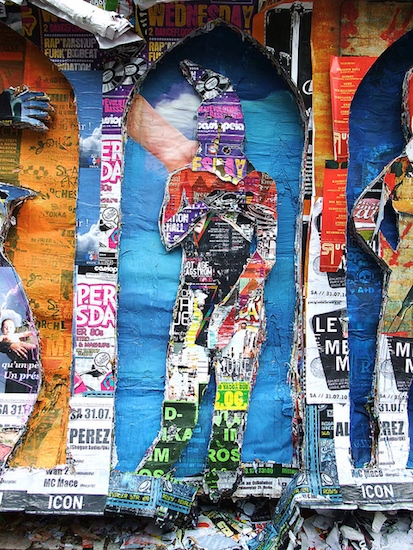 What we do know is that this was no marketing stunt, unless you include guerrilla marketing action within that bracket. “I think it is a group of people,” commented Flickr user Lily Plume. “They paste posters with subversive/second-degree texts: credulity is a virtue, check the origin and validity of your friends, etc. The messages are very critical (and leftist) regarding the world or French politics.” 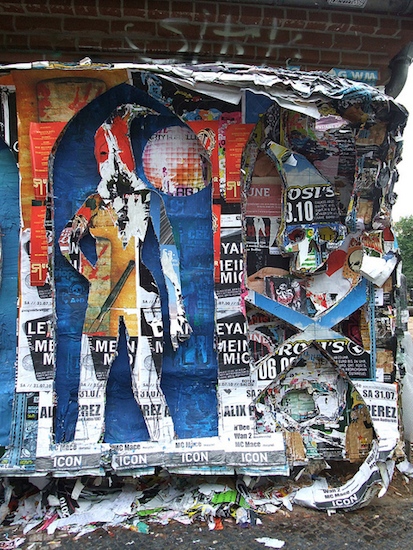 It may be rebellious, but that doesn’t make it any the less beautiful — whatever your political stance. Antonia Schulz, who took the photographs featured in this article, agrees: “I really love this strange-beautiful piece,” she told us. “I like the carving technique combined with those crazy thick wheat paste poster structures. In the end you have a relief.” And what a relief to see such imaginative reuse! 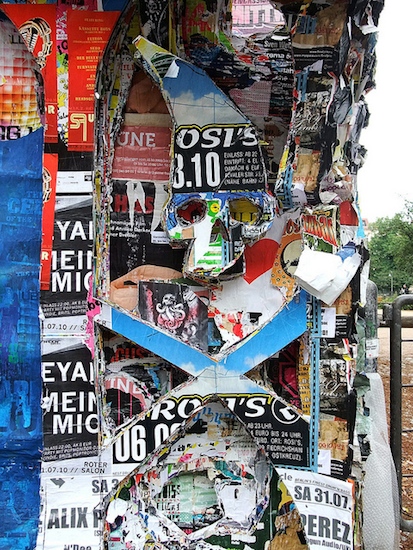 Schulz was unable to shed more light on this mysterious piece: “I can’t tell you much about it,” she explained. “I saw it on a crowded market day, so it was hidden by people and stuff. So, I came back the next morning to take the pictures. Some days later, it was gone, mostly.” It’s telling that the artwork was cleaned up so quickly when the same couldn’t be said of the massed posters that made up its medium. 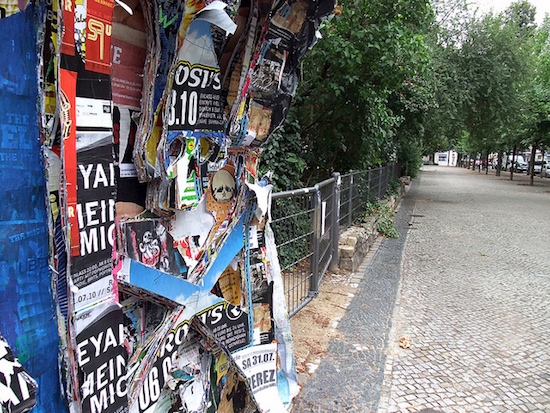 Yes, it wasn’t done strictly by the book, but from a recycling standpoint, it’s great that someone seized the initiative while underscoring the issue of poster paper wastage — and not just through barefaced vandalism like defacing billboards with crude, inane graffiti or simply stripping the paper away. Rather, this street art intervention contrived to transform an urban space into something truly original. 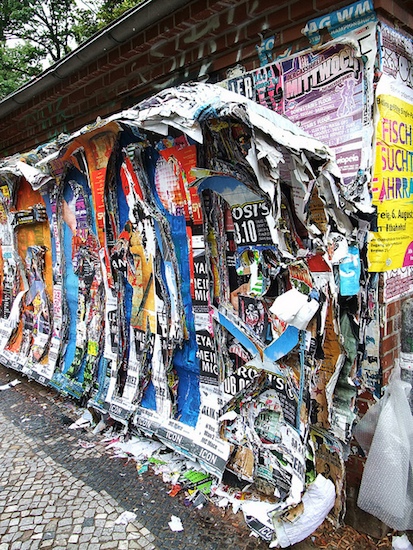 If, as Hyper Allergic Labs argue, BaT ArT Error is “trying to fashion a revolutionary image” for itself, this is a revolution we wouldn’t mind seeing televised. Cut-up, mashed-up contemporary street art rarely looks so amazing! Thanks to Antonia Schulz for permission to use her photos. Sources: 1, 2, 3, 4, 5