These awesome recycled NES controller mods will make you want one, too! 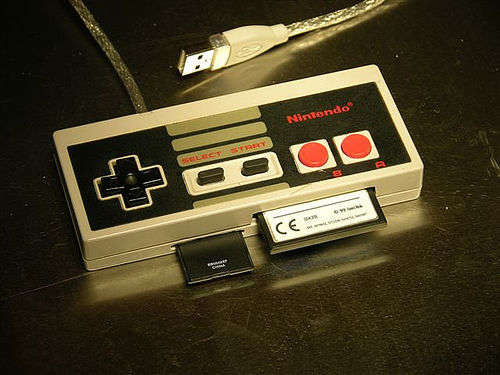 All images used with permission.

Who could forget that ’80s icon that had us glued to our screens? We’re talking about the Nintendo Entertainment System (NES) of course, available in Japan from 1983 onward, in the U.S. from 1985 and in Europe from a year after that. A proud 60 million devices were sold, and it was the platform on which we first saw gaming icons like Super Mario Bros and The Legend of Zelda. To date, the NES is the most copied game controller of all time and almost 30 years on is still going strong — if not quite as intended. We’ve picked 10 of the best recycled designs from those out there that put an old NES controller to an excellent new use and will surely turn heads on the street, in the office or at home. 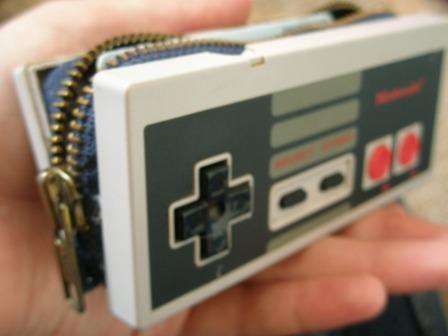 Take this wallet for example; just imagine coolly pulling it out the next time you make a purchase. And yes, that would be cash only, no cards. You would have to sacrifice an old NES controller by slicing it in half and taking out the innards, unless you want to keep it as functioning device, in which case just cover the internal parts with a lining. Apart from that, you need wire-snip pliers, glue and a long zip. Done! 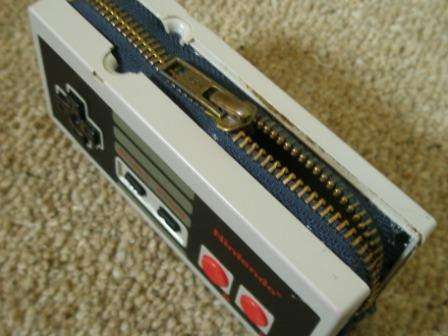 There’s no sewing, just gluing. Follow the picture credits for some more detailed instructions. Shelling out cash has never been so much fun! 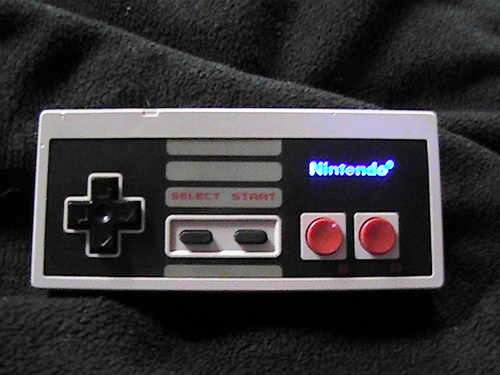 Another advanced DIY project is this MP3 player made out of an old NES controller. Needless to say, all the buttons work, and as an added feature the Nintendo logo lights up via fitting LEDs sitting within the case. A gadget even the next generation cannot say no to. Creator Ryan97128 explains, “My son got this for Christmas and hasn’t put it down!” We can believe it! 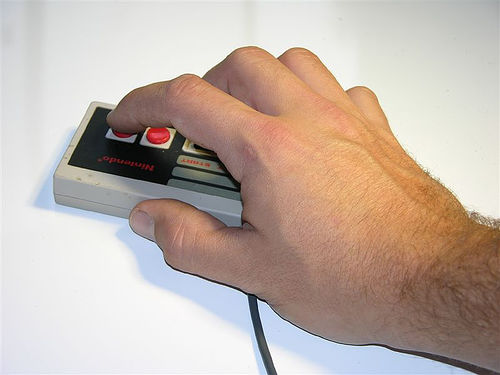 Also very, very cool is this computer mouse made from an old NES controller. If you want to make one yourself, the whole project will take you about four to five hours. And only $1 if you find an old NES controller at a thrift shop like creator Ryan McFarland did. Sweet! 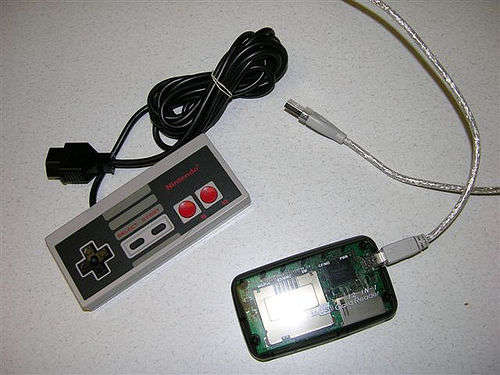 Also by Ryan is this amazing PC card reader (pictured top) made from an old NES controller. This one he bought at a thrift shop for 37¢! What you’ll also need is any card reader of your choice, a few small screwdrivers, a rotary tool, a hobby knife set and various glues. After a few hours of patient labor, you’ll have a card reader that’ll be the envy of your friends. 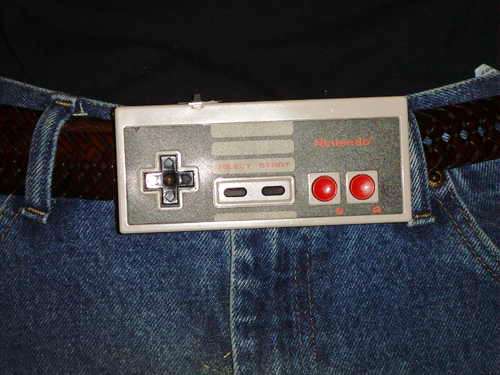 Taking it up a notch is this NES controller belt buckle, sure to make for some interesting party conversation. But that’s not all; it also merges a Mario Bros. sound effects key chain with the buckle to give it sounds from the original Super Mario Bros. Can’t go more retro than that! 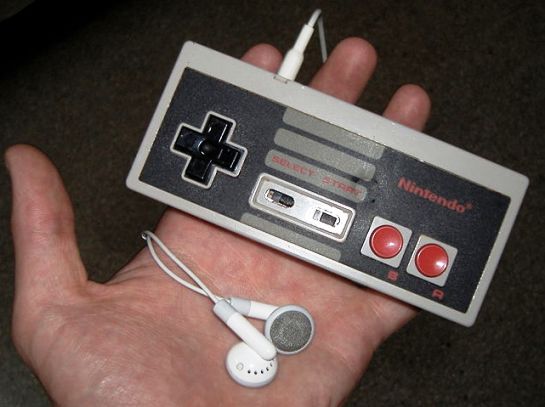 Reaching the midpoint of our list, we have this awesome iPod shuffle mod, combining the latest in tech with retro chic. Speaking about his iPod shuffle mod, Colin Ashe says, “This thing looks great, and works beautifully — I get loads of questions about it on the street from all sorts of people.” The only modifications were the replacement of the original Start/Select rubber buttons with small switches and a USB port on the side. The controls are now: Up/Down for volume up/down; Right/Left for track forward/backward; Select for three-way switch for continuous play, shuffle play and off; the Start switch for hold; and the A button for play/pause. Those who would like absolutely nothing to happen can press the B button. Brilliant! 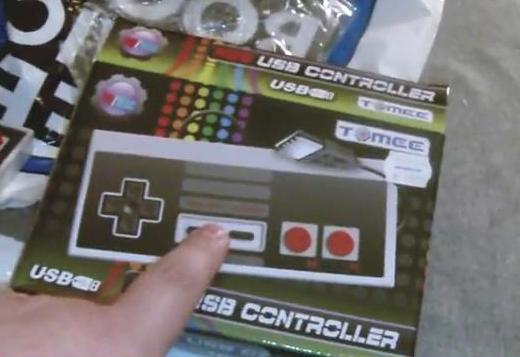 Speaking of remotes, for $20 a pop accessories manufacturer Tomee makes USB controllers from old NES controllers so that retro fans can play NES style on their PC or Mac. How cool is that? We’re not sure if the company actually bought old NES controllers or if they are duplicating them; we’re hoping the former, though the latter might mean a revival of NES controllers! Talking about the controller, user Frapper Mac says, “No software needed. It’s plug and play. Did so on Vista and XP PCs and same result. And it feels a lot easier to play than those Playstation-style monsters you can get for PC controllers today.” And considerably more retro chic! 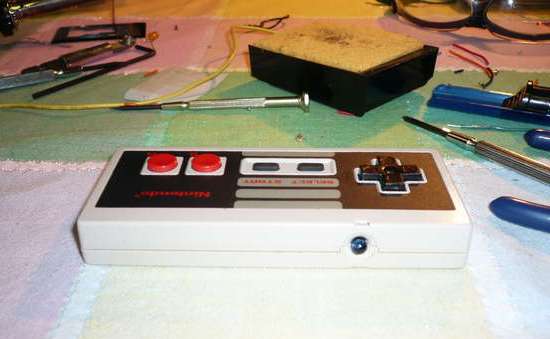 Next, here’s an Apple remote that will surely attract more than just a few admirers. As it involves basic soldering skills, this is an advanced project, but if you can’t do it yourself, maybe you’ll find someone to make it for you, or you can order it. Creator Agurri is definitely onto something with his invention. He explains how the project came about: “This idea started when I saw someone on the Web putting an iPod Shuffle into a NES controller. I thought it was was a great idea. Then I got the idea to do the same thing, but instead of an iPod Shuffle, I would use the Apple remote.” Good thinking! 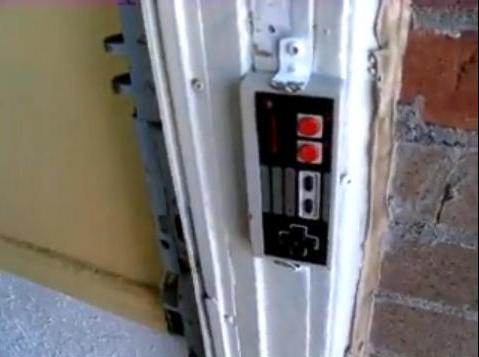 Visitors to this house might not actually enter but stay outside to play with the doorbell. Yes, it is made from an old NES controller, and you can press any button to ring the bell. We’re pretty sure that this is quite a well-frequented home. Awesome idea! 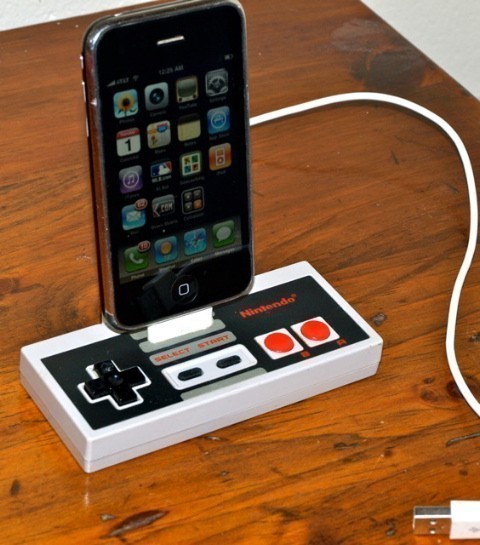 Our favorite item, and for $40 a real steal, is the iPhone or iPod Dock by Jeremy and Lee of GeekUnique. The NES controller has been upcycled into a handmade, one-of-a-kind working docking station. Just plug the USB cable (which comes with it) into the computer and charge and sync your iPhone or iPod immediately. We’re off to order one now! So, yes, if you are feeling nostalgic about the good old times when an original NES controller resting lightly in your sweaty palm meant hours of fun entertainment, you can replicate the feeling right now in whatever form you might want, be it as an iPod, MP3 player, card reader, mouse or even wallet. And, to attract like-minded people, just wear the NES belt buckle. Let the NES revival begin! Additional source: 1