Ten incredible recycled Artoos! The ‘Star Wars’ scrap geniuses the Jawas can read it and weep! 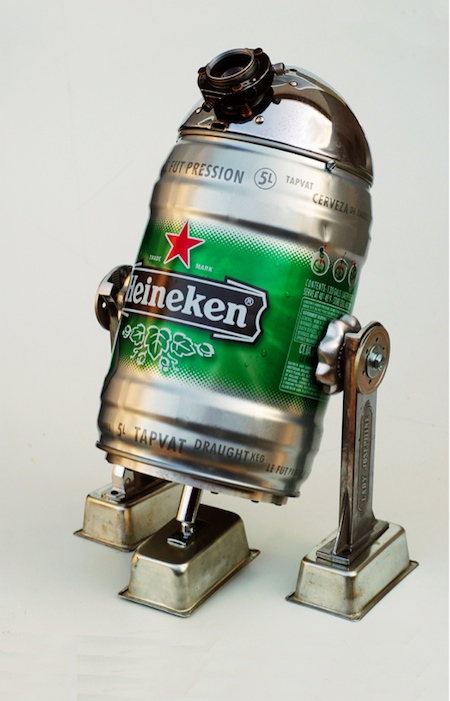 Brave, adaptable and unswerving in his support of the Jedi good guys, R2-D2 was a lot of things C-3PO wasn’t in the Star Wars movies. Small wonder that the beeping little bot has rolled into practically everybody’s list of favorite fictional robots, while his lily-livered comrade is less well-loved. While “Threepio” may be fluent “in over 6 million forms of communication” from across the galaxy, his camp chatter never translated as well as “Artoo’s” musical tones in audience hearts.

Likewise, R2’s design — his memorable depiction as a blue-and-white, chrome-domed mechanical maestro — was always destined to be reimagined and recreated more than that of his gold-plated counterpart. What could be cooler than making replica R2-D2 droid art, while salvaging, recycling and reusing a veritable Jawa’s scrapyard of materials that might otherwise be thrown in the trash? (Maybe Boba Fett body-popping in the Mos Eisley Cantina?). Here are 10 of the best. 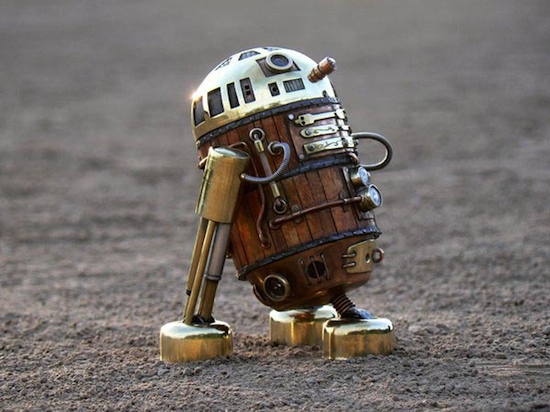 This entry in our list showcases brilliant craftsmanship that perfectly brings to life an equally epic concept: R2-D2 reimagined for the steampunk generation. Plus, this 6.5-inch droid sculpture was created using recycled materials! According to Inhabitat, “The boiler planks are made from wooden coffee stirrers from a burger joint and the dome uses the internal workings of a water meter that took the artist ‘about two days to beat out and cut it into the shape [he] wanted.'” 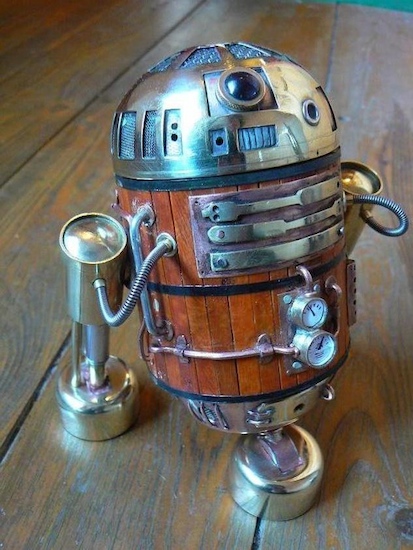 Does awesomeness know no bounds? Hailed as a “fantastic fusion of popular culture and a popular artistic style,” this creative reinterpretation of the charismatic diminutive droid is the work of U.K.-based master craftsmen AmoebaBoy. It’s amazing how it manages to be both a great likeness of the original Artoo while also adding its own aesthetic twist, provided by the polished brass and ornate wood finish plus, the coup de grâce: those wonderful retro dials on the bot’s belly. 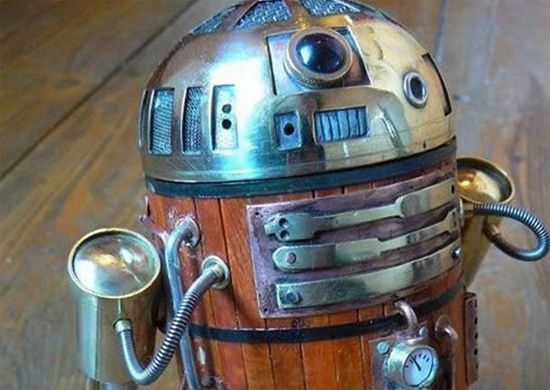 AmoebaBoy has received some killer feedback on his project but it’s still unclear where the finished product will end up. Initially, there was a plan to hold a raffle to ensure it went to a person “with a genuine love for this sort of thing [and] not someone with deep pockets who would buy it on a whim.” AmoebaBoy said he wanted to: “[R]aise enough to cover my time spent making it and my materials and a few quid to fund the next project,” but has since told us that the raffle idea was shelved due to complications, explaining, “Since then many have wanted, but so far none have come up with the cash.” Get saving, people. 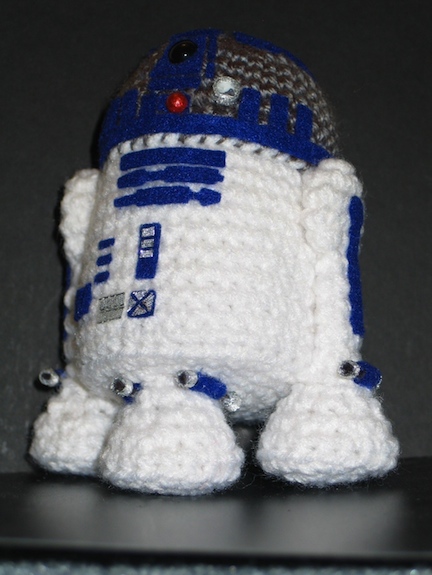 Artoo’s one cute droid anyway, but this next hand-crafted fabrication takes the little fella to Cloud City levels of cuteness, only bettered by clips of R2 in the movies, bouncing excitedly on the spot. Yes, this is R2-D2 recreated in yarn as a 5.5- by 3.5-inch crochet doll with a Japanese chibi look that’s as huggable and snuggable as they come. Aw. All the details you know and love are there — the red flashing light, silver plating and iconic blue trims — and we’re simply smitten. 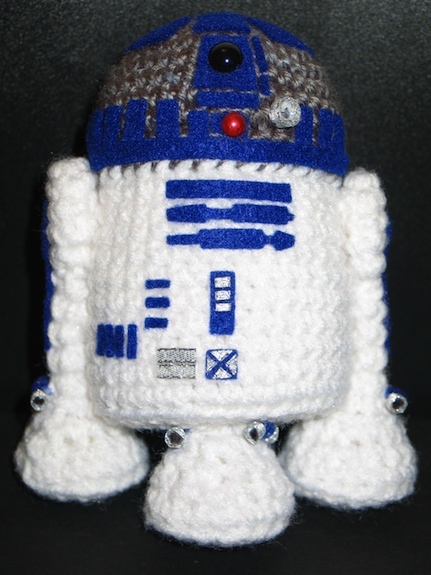 The idea for the Amigurumi Artoo was born when its crafty creator, Janama, needed a birthday present for her Star Wars fan brother and, having just started crocheting as a hobby, “decided making him something meaningful would be nicer than buying him something lame and cheap.” A good choice it turned out to be, as not only was her brother blown away, but most of the Web too, with her R2 ultimately making it onto the Star Wars blog. 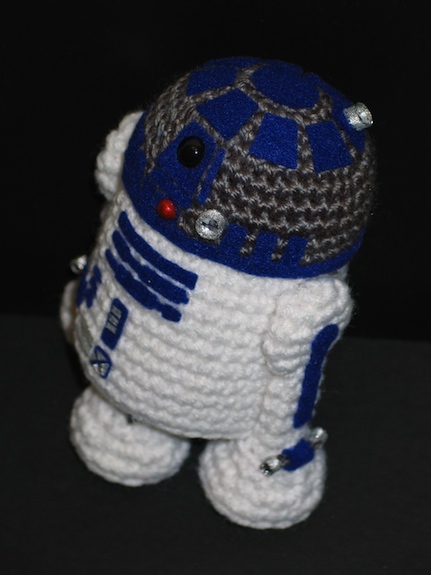 If you want to buy one of these super soft R2s, jump over to Etsy, where they’re $8 a pop. Alternatively, why not brush off those balls of wool gathering dust in Grandma’s closet before they get eaten by moths? 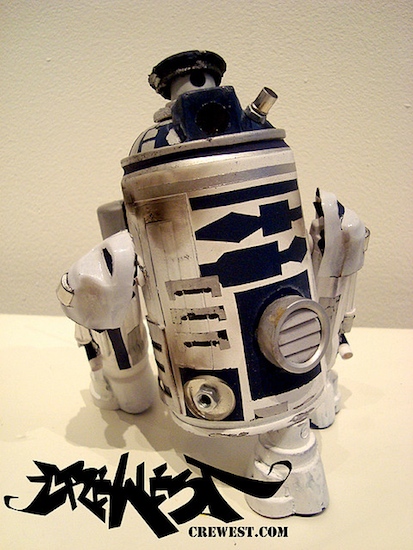 This next piece of imaginative recycling is a lesson for graffiti artists in what to do with their old spray cans when they’ve exhausted them painting murals to liven up the concrete landscape. Yes, this urban Artoo’s body is a used-up aerosol that’s been pimped up with some nice details. It was created by underground artist Dcypher and shown in downtown Los Angeles’s Crewest gallery. The exhibition, entitled “CANceptual,” ran with the slogan “Recycle your spray cans… make some art… save the Earth.” Sweet. In fact, almost as sweet as R2 himself — although this little blood looks like he knows how to handle himself! 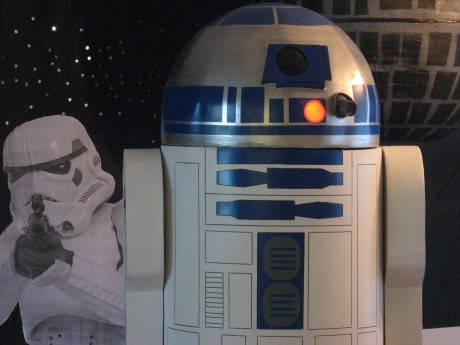 If you’ve ever wanted to liven up a social occasion by choreographing the entrance of our beloved, blue-trimmed classic Star Wars character, then you’ll definitely dig this 42-inch-tall life-size R2 clone, which features the clever use of materials, many of them recycled. It was the brainchild of Instructable user BrianH, who built his budget prop for a Star Wars party using cardboard, wallboard joint compound and a ton of stuff he had in his junk box.

For the body’s frame and covering, Brian “acquired a few used refrigerator boxes at a local retailer,” but arguably the most creative upcycling is in the details. R2’s red light was made from a scrap of PVC pipe, while his holographic projector (think: Princess Leia saying, “Help me, Obi-Wan Kenobi. You’re my only hope”) is a piece of metal tube from a discarded vacuum cleaner and a fishing bob. Add the eye, made using the lens from a dollar store plastic magnifying glass, and you’re looking at an Artoo that’ll make you the life and soul. “Now all that’s left to do is install a MP3 player with some amplified speakers and some appropriate sound effects.” Disco baby. 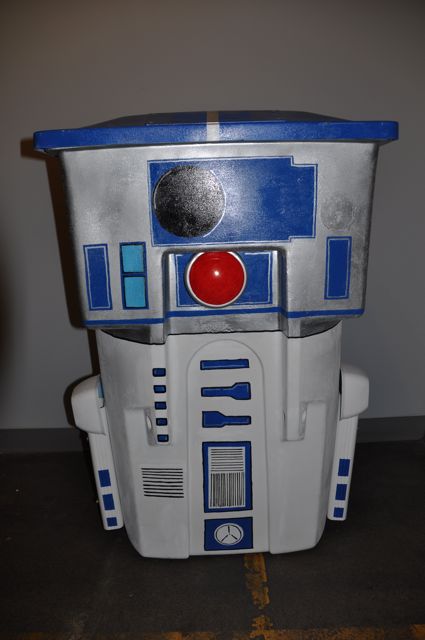 The next version of R2 eschews the domed shape of the original in favor of an angular look, but that doesn’t mean you can call this piece of plastic a square! Named Recycle2D2 by its maker, Erik Escoveda, this take on the classic droid featured in a 2010 program by nonprofit Global Inheritance that invited artists to transform old bins into artworks using their creativity and a lick of paint. The project, known as TRASHed, hoped the redesigned recycling bins would encourage people at big events like California’s Coachella music festival to get recycling while enjoying the cool designs. If you were met by an Artoo asking for your recyclables, how could you refuse? Past designs have been created by everyone from Hunter S. Thompson to Fugazi. Nice. 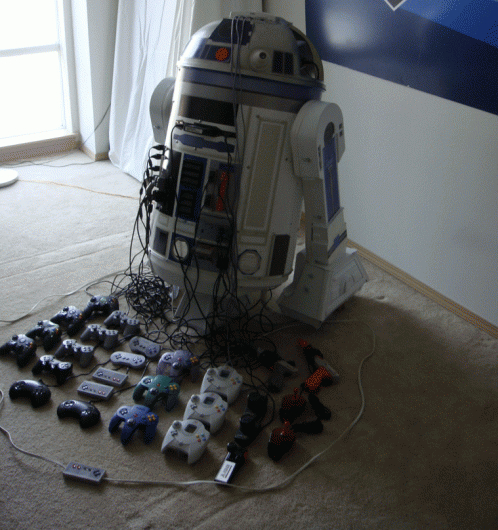 Here’s a bit of repurposing for all the gamers out there: a hack n mod that uses an R2-D2 cooler as the shell for a multiplayer, multi-console personal gaming machine — retrofitting the way only an engineering genius like Artoo himself could execute! Crammed inside the cooler are not six, not seven, but eight game consoles — and to cap it all off, there’s projector head-mount much like the real R2-D2’s as well as a built-in sound system. And the geeks go wild! With that chaos of cables running through him, this R2 looks like the way we imagine the little dude was fixed up after being critically damaged during the attack on the first Death Star. 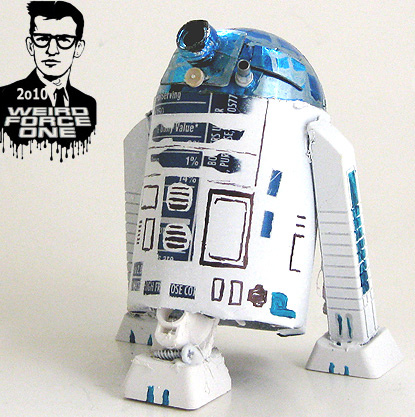 Our next entry looks like R2 might have ended up if he’d stayed in the Jawas’ captivity for life instead of being bought by Luke’s uncle and going on the adventure of a light year. Cobbled together with a Pepsi can, a blue Christmas ornament, disposable razors, a couple of keyboard keys, some tiny grommets from a lighter and paint, it’s a true pint-sized trash heap treasure — handmade by the folks over at Weird Force One, who specialize in creative DIY toys money can’t buy. You can see more about how it was made by viewing the video that spawned it here. 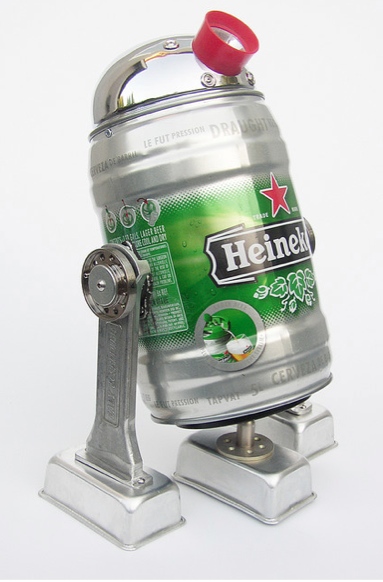 Most Star Wars fans have hunkered down to sink a few cold ones while watching the awesomeness that is the original trilogy, but what to do with all those empties when beer-and-movie night’s over? Well if you’re not going to recycle the aluminum the conventional way, you could always take a few tips from assemblage ace Lockwasher, who came up with these R2 adaptations reusing the mini kegs of a certain Dutch beer. 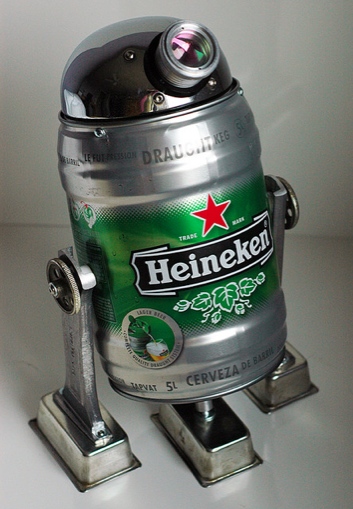 Lockwasher’s first reincarnation of R2 stood 18 inches tall. “After several mugs of liquid inspiration while viewing Star Wars for the umpteenth time BeertooD2 was born,” he says. “Or should I say drafted? His 4.7-liter keg body, chrome tractor headlight dome, vintage shoe polisher legs and mini bread loaf pan feet have proven popular with the over-21 crowd… May the force beer with you.” 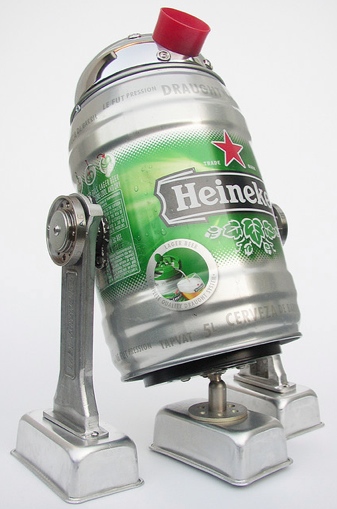 Lockwasher received bucket loads of requests for the original BR2D2 and sold it, but the little guy returned as Beer2Dtwo and a 16-inch Beer2D3 created for the San Jose Super Toy show. 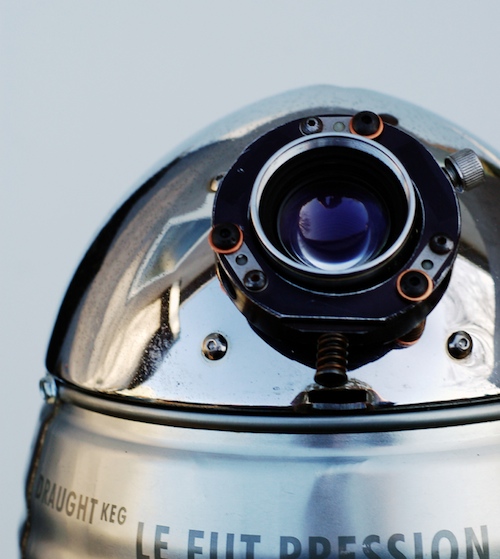 While the refrigerated section at his local liquor store and a taste for dusting off beers clearly helped this project, Lockwasher says, “I find my raw materials everywhere. I hit garage sales, flea markets, my family and friends keep an eye out for me plus I am and always have been a pack rat, so I already had a ton of stuff before I start this silly assemblage thing… I never throw anything away.” The beer sure doesn’t go to waste! Read an interview with Lockwasher on the Star Wars blog here. 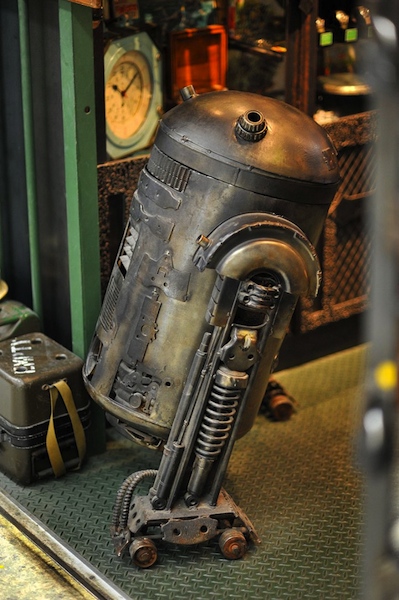 Another Artoo with steampunk stylings, randomly spotted “outside a shop selling military gear” on Tokyo’s Nakano Broadway, it’s a heavy metal unit that looks like it’s been like it’s been fashioned from scrap metal courtesy of a nice bit of welding. “These are pretty straightforward tack welds in the picture, but the ‘collage’ combination of scrap parts is pure genius,” offers commenter Robai. Thus, while this R2’s steampunk credentials have been called into question — with complaints about its lack of brass color or leather — as a piece of recycling it’s hard to better. 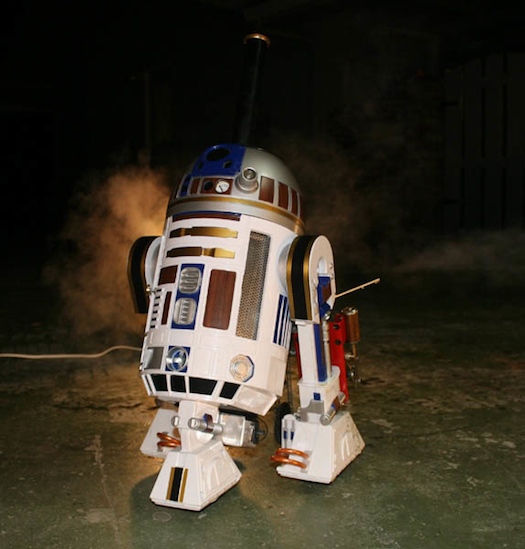 From steampunk to fully steam powered, this amazing creation comes care of the contraption-making genius that is Crabfu Steamworks. Inventor I-Wei confesses: “The first robot that I ever built was an R2 out of Legos when I was 5 years old.” 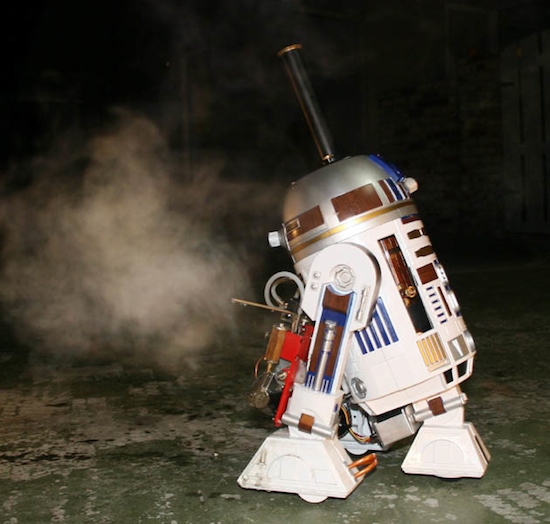 “When I ‘grew up’ I knew I had to visit my old friend, R2,” I-Wei continues. “I love machines with personalities and charm. You can love or hate Star Wars, but everyone loves R2. To many of us, R2-D2 was our first introduction to robots. He’s a Swiss army gadget bot with charm who always saves the day. It just doesn’t get any better than that.” You bet. 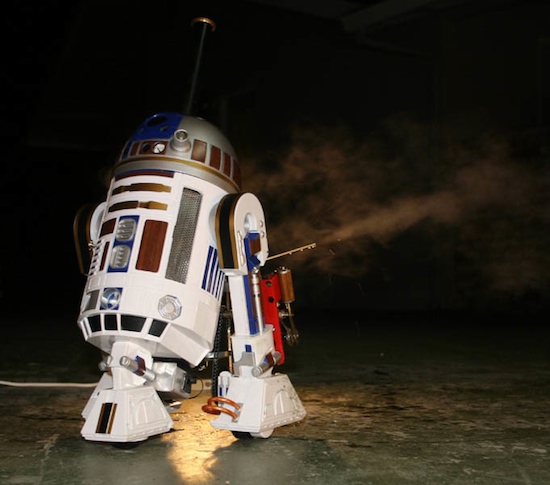 To construct this cooked water-propelled version of Artoo, I-Wei stripped out the unusable electronic guts of a broken Hasbro R2-D2 Interactive Droid no one else wanted on eBay (“Yes it was disturbing,” he says), leaving him with a gearbox and body shell. Dual steam engines and an old boiler were then added to power the mechanism, before plenty of wood, brass and leather as finishing touches, steampunk style.

The final construct is an awesome-looking robot with 10 minutes of run time! “Gearing is very low, and R2S2 runs at a snail crawl,” I-Wei concedes. “However, R2S2 still holds the record for the fastest steam-powered R2 in any galaxy.” Can’t argue with that. Additional sources: 1, 2, 3, 4, 5, 6