Imagine one of the most extraordinary types of recycling possible: creating beautiful ocean coral reefs from the submerged wrecks of boats and vehicles! 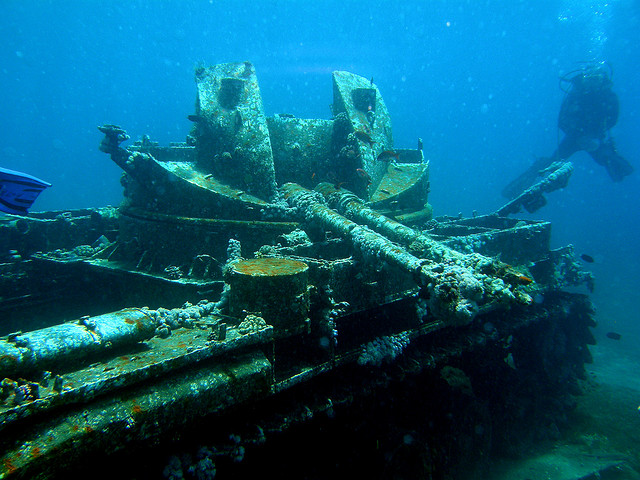 Rising abruptly out of the ocean bed and teeming with colorful life, coral reefs are some of the most amazing natural sights on earth — truly, there’s nothing else quite like them. Occupying less than a tenth of 1% of the earth’s surface, they are home to more than 25% of all marine species, and are always surrounded by swarm-like schools of fish and alive with crustaceans, mollusks and sponges. 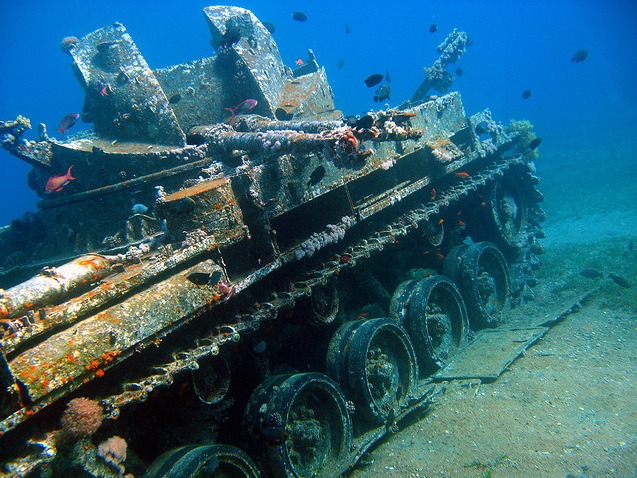 Today pollution, disease and overfishing are all hitting coral reefs hard, and many face a precarious future. However, while mankind might be pushing many of the coral reefs around the world to the point of destruction, we have also been responsible for creating new ones, whether by design or by accident! Indeed, whenever new shapes arrive in the depths, coral will gradually begin to collect, bringing with it a flowering miniature ecosystem. Here are seven such artificial reefs shaped from the wrecks of vehicles, each of which has become a truly spectacular underwater environment! 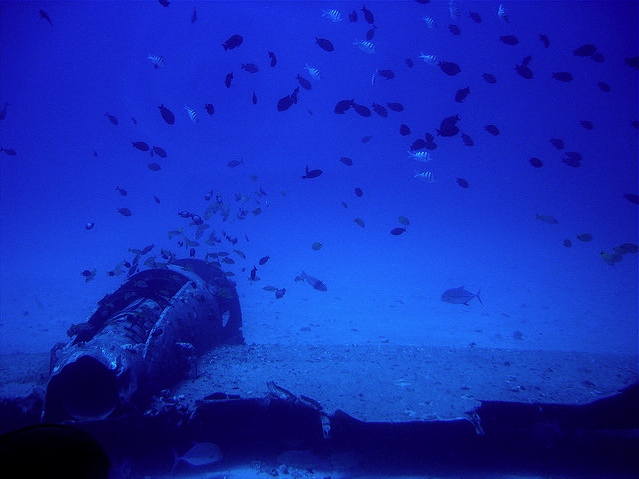 Although this old passenger aircraft may once have soared through the skies, it now sits on the base of the Pacific Ocean in a watery grave. Nevertheless, while it might not be delivering people to their destinations any longer, its current purpose certainly has brought new life to the ocean, with all manner of life clinging to its wings. 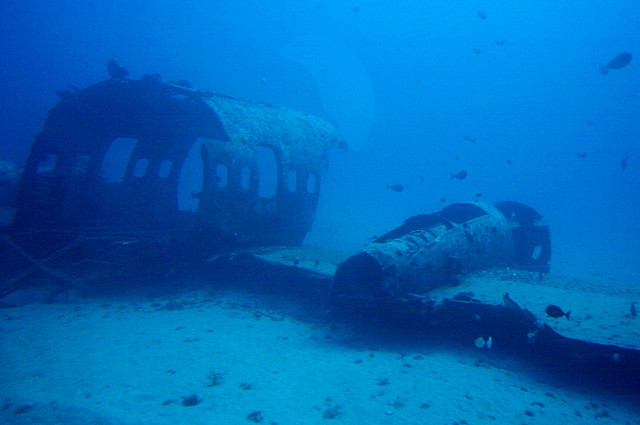 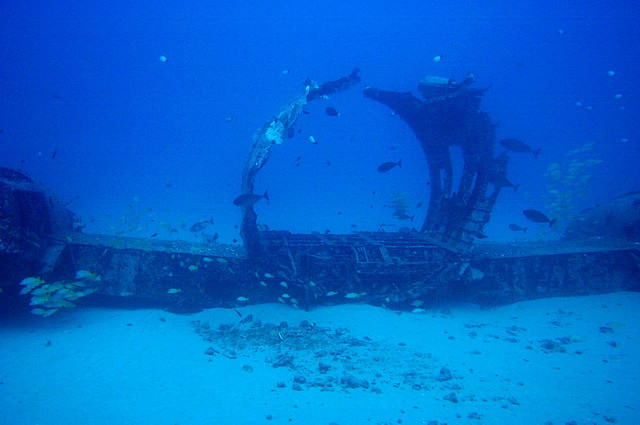 It is also one of the attractions on a the Atlantis Submarines tour, which claims to run the oldest and most technologically advanced passenger submarine in the world. Each voyage below the depths ferries 48 passengers to see the beauty of the Pacific ocean floor. 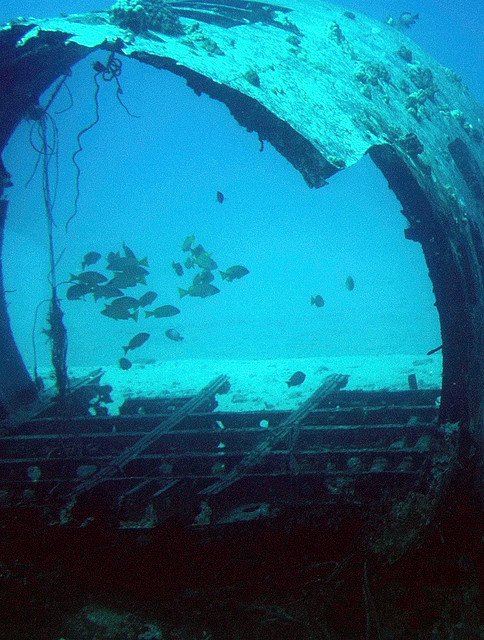 As well as this airplane fuselage, the tour takes in the wrecks of several ships — but more about that later! 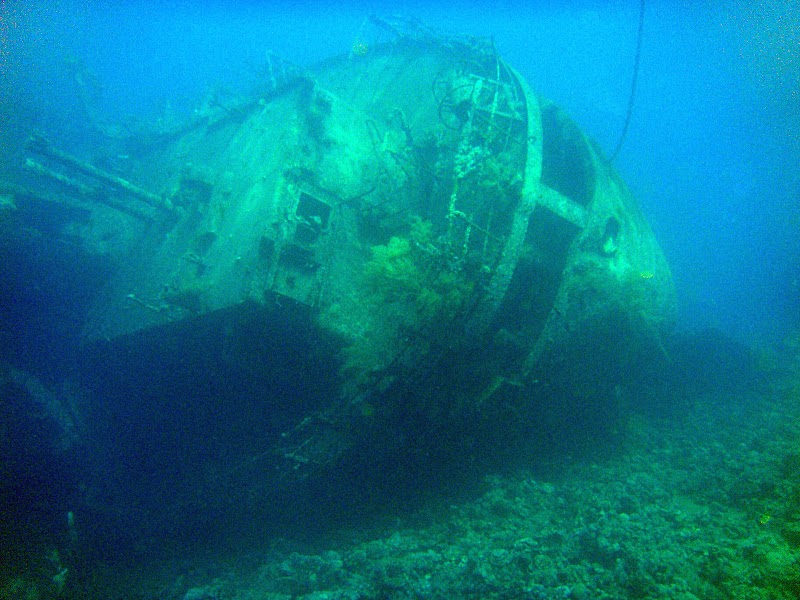 On the other side of the world from Maui is The Cedar Pride, once a Lebanese merchant vessel, but now home to a remarkable diversity of sea life. 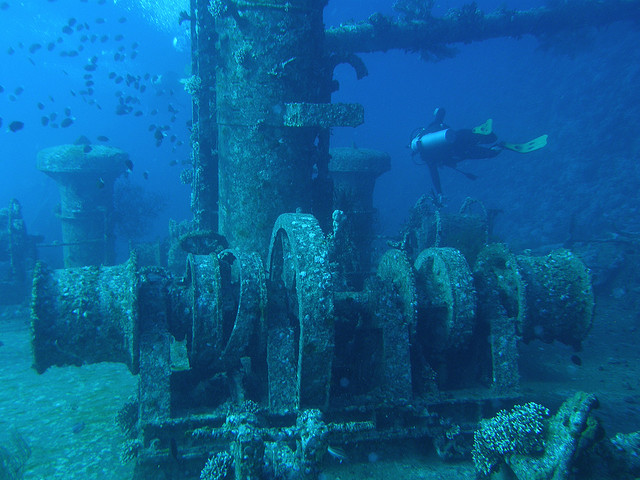 In August 1982, the ship was moored in port in Aqaba, Jordan, when a fire broke out, wrecking the ship while leaving it afloat. In 1985, the King of Jordan, HRH Prince Abdullah, took charge of the abandoned hulk, setting in motion a plan to recycle it as an artificial reef. 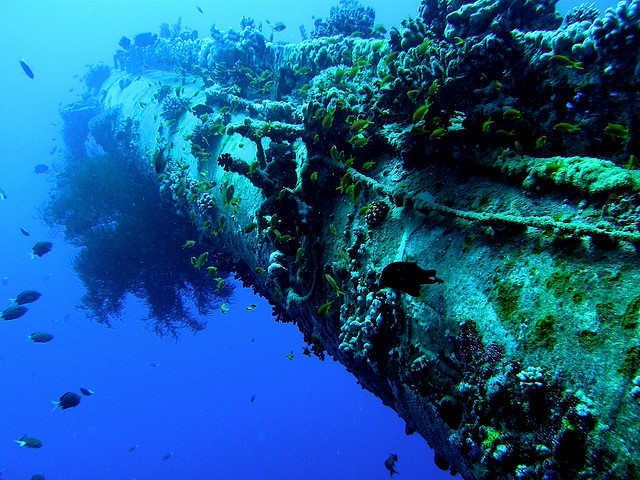 Oil was pumped out of the ship, on-board hazards were removed and the ship was eventually scuttled in November 1985. It now sits 82 feet below the waves and 426 feet from the shore, and has been described as one of the most photogenic wrecks in the Red Sea. The water around it is now thick with lionfish, lobsters, morays and Spanish dancers; further proof of the power of recycling — repurposing an unwanted wreck as a font of life! 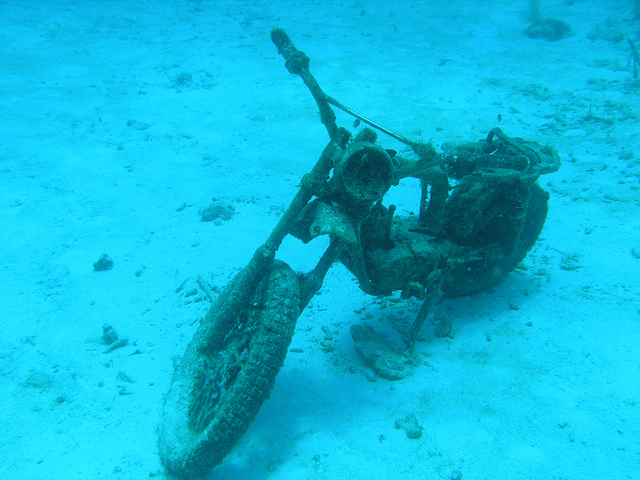 Although positioned as if ready to burst into action, the glory days of this motorcycle are of course over. As photographer Stephen Weir puts it: “An inglorious end to a faithful friend.” Sitting off the shores of the resort town of Akumal, Mexico, it’s not gathering dust, but instead is now covered in living coral and plankton. In fact, the 15-year-old formation is now one of the most popular local dives in the area. 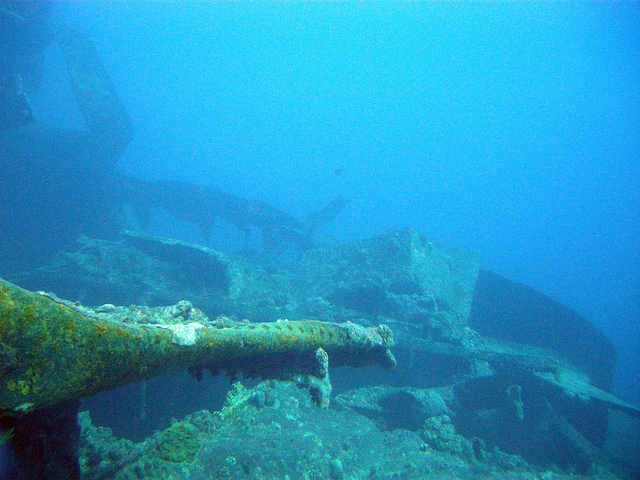 An armed freighter in the British Merchant Navy in WW2, the SS Thistlegorm was sunk near Ras Muhammad in the Red Sea in October 1941. The ship had made its way from Britain and around Africa in order to supply Allied troops in north Egypt, and it was here that German bombers found it and sent it to the bottom of the ocean. 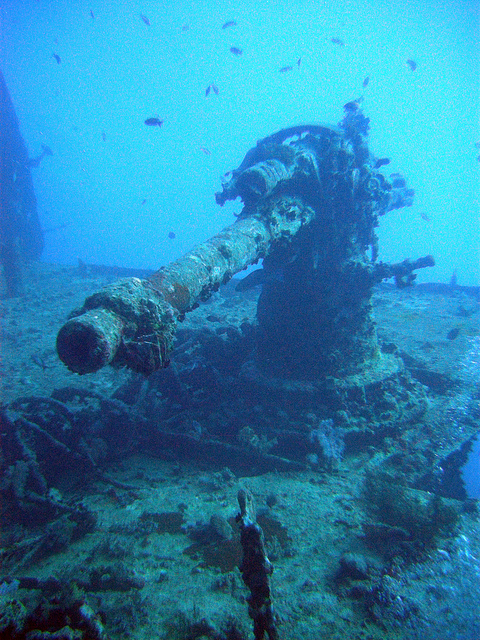 Close to the Egyptian resort town of Sharm el-Sheikh, the sunken ship is now considered one of the best diving sites on earth and attracts visitors from around the world. Trucks, motorcycles and armored vehicles can all be found in the hull of the vessel, ripped open by the explosion that sank the ship. Now divers mingle with marine life as they explore the exposed wreck. 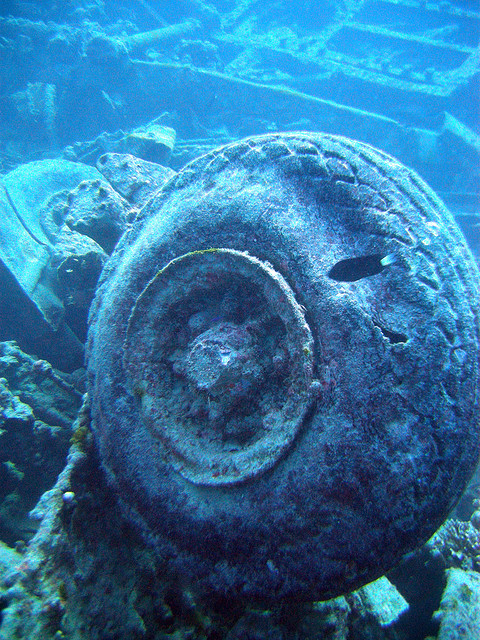 Since sinking into the depths, the surfaces of the Thistlegorm have gradually been covered in coral, while brilliant shoals of fish flock to the wreck, making it a truly amazing place to visit. 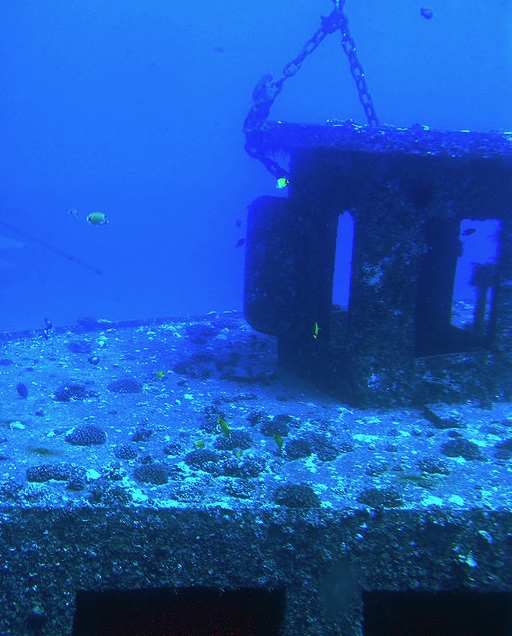 This extraordinary sunken ship is the Carthaginian, a replica of a 19th-century whaling vessel that now sits 100 feet below the waves, off the coast of Maui. Before being repurposed as the basis of an artificial reef, the ship was in need of major repairs, and would otherwise have been scuttled at sea. 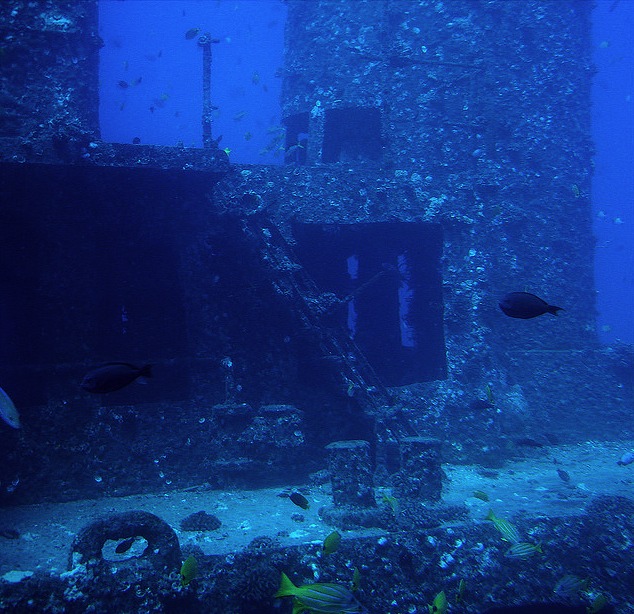 Anchored down to the ocean floor, it is now one of the key attractions on the Atlantis Submarines tour, not far from the sunken airplane fuselage seen above. 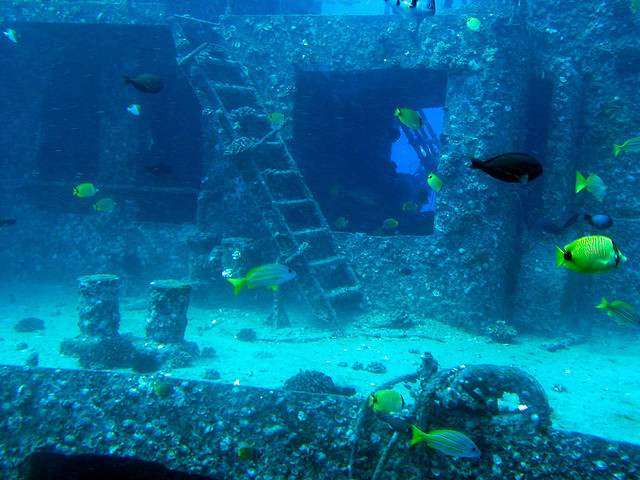 In the five years since the ship was placed in its present position, in December 2005, ocean life has flourished across its decks, forming a self-sustaining habitat for a wide variety of sea life. 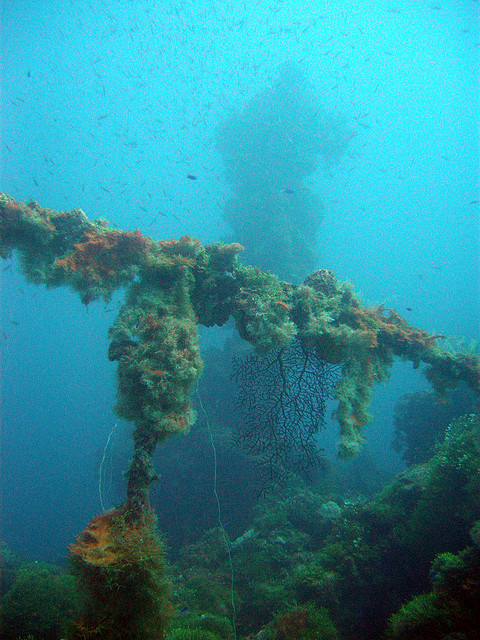 Truk Lagoon is sometimes referred to as the Japanese Pearl Harbor. On the morning of February 17, 1944, the U.S. Navy launched an attack, sending more than 60 ships and 275 aircraft to the ocean’s floor, and creating the greatest nautical graveyard in the world. Above is an old freighter named the Unkai Maru, sitting upright in the lagoon. The ship actually still bears its original name, The Venus, upon its hull. 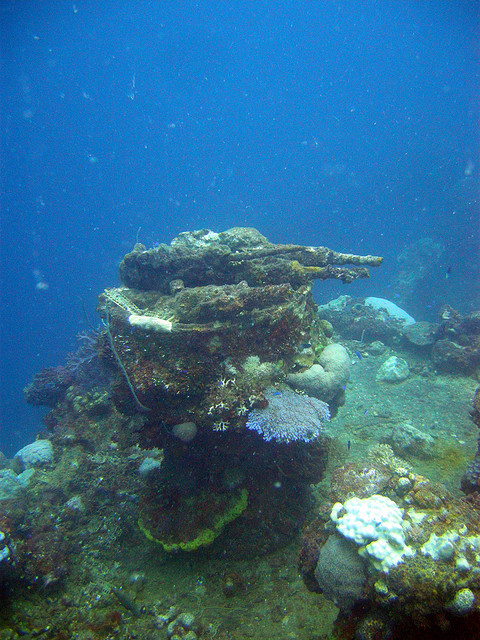 Today, the amazing array of largely intact ships, sitting in shallow, crystal clear water, is a tempting attraction for divers looking to explore the twists and turns of a battlefield frozen in time. As well as battleships, the remains include tanks, bulldozers and railway cars, as well as more mundane items like gas masks and radios. Within the hold of the Sankisan Maru (a gun turret on the deck of the ship is pictured above) are aircraft engines and a number of trucks. The deck has been covered in anemones, while the mast is covered in soft coral, playing home to an astonishing variety of undersea creatures. 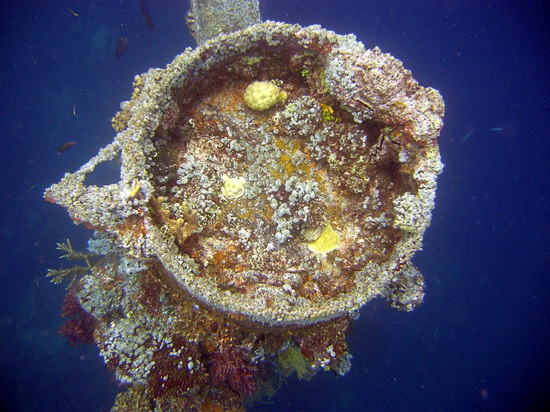 Local marine life includes turtles, manta rays and sharks, while in a 2007 survey, more than 266 species of reef fish were documented in the area by Earthwatch. Though the site might be marked by a sad history of conflict, it has created an extraordinary new situation for life to take root. 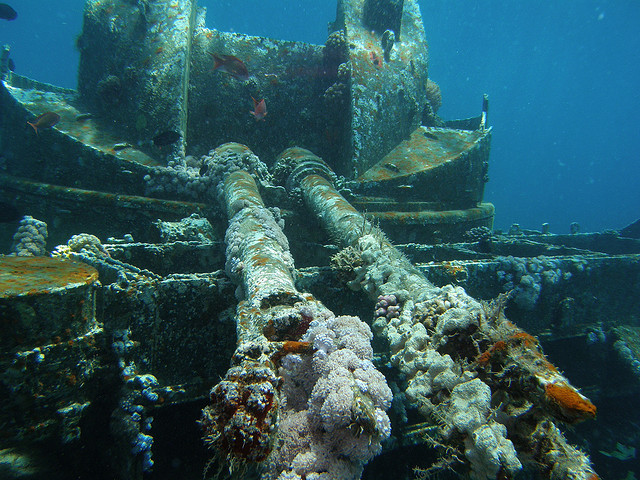 Imagine coming across this imposing shape on the seabed. Once it was an M42 Duster, a powerful anti-aircraft gun in the Jordanian Army; now, rather than being a weapon of war, it sits at the bottom of the sea in the Gulf of Aqaba, off the coast of Jordan, and has become a haven for coral and fish — and curious divers! 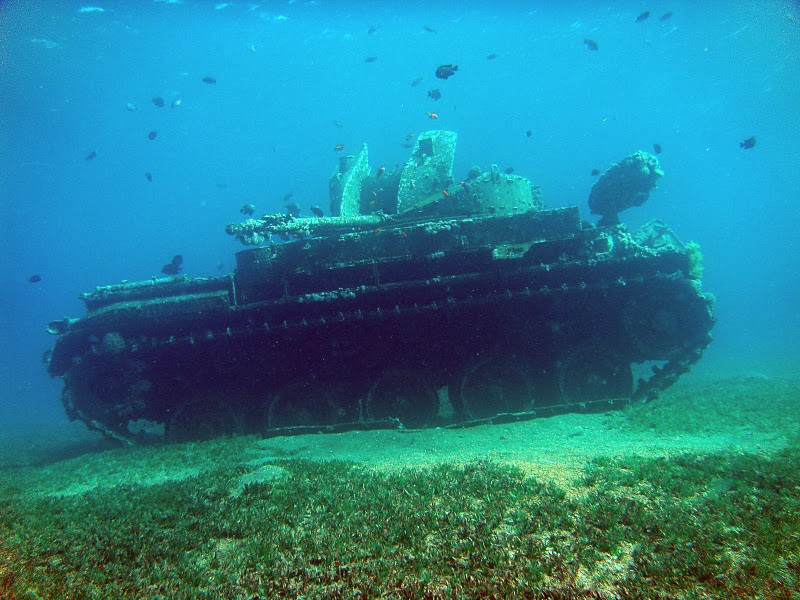 The self-propelled artillery gun was sunk by the Jordanian Royal Ecological Diving Society on September 1, 1999 with the intention of creating an artificial reef. By no small coincidence it is said that the King of Jordan himself is a keen diver. Now, encrusted with coral, and surrounded by shoals of fish, it makes a distinctly unusual underwater sight — and a great place for a photo opportunity. 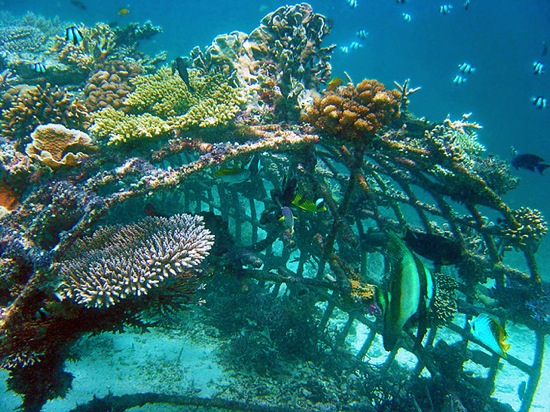 This method of creating artificial reefs is rather different, but is founded on materials that are as simple as a metal grid and old barrels. What is special about biorock is that it creates an extraordinary, accelerated growth of coral. By passing a small electrical current through the water around it, minerals are encouraged to accumulate on the structure’s surface for as long as the current lasts. In this way, extraordinary formations can be quickly created, as can be seen in Ari Spenhoff’s amazing pictures. Sources: 1, 2, 3