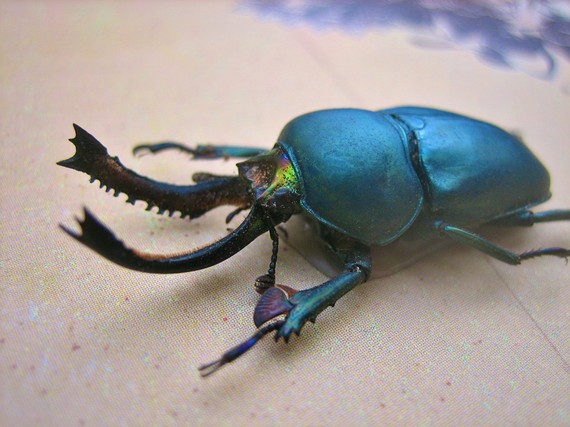 Beetles gilded by Mother Nature’s touch crawl up walls, armed with rhino-like horns, menacing pincers and adamantine shells. Butterflies and cicadas fly beyond the confines of their frames, wings ablaze with resplendent patterns. 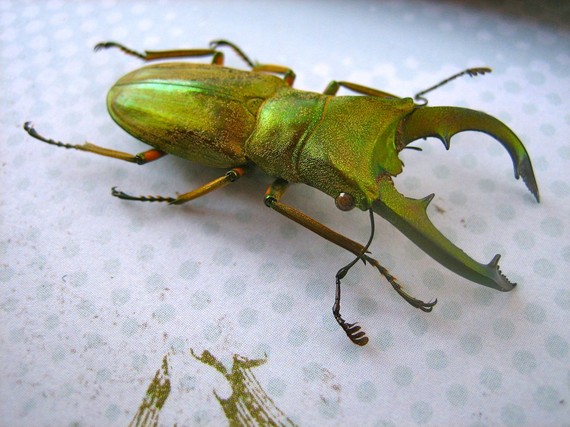 Other exotic species lie embedded in broaches, perch atop pendants or stand guard over earrings, metallic tones reflecting the light just as well as any gemstone. Each jewel-like insect has a depth of color that can only be real, highlighted by the most subtle and occasional of accents. Each insect appears alive. 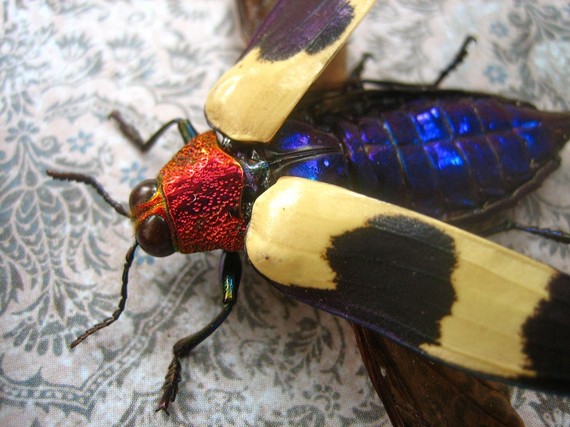 Real these insects certainly are, but, while their strange, creepy beauty might suggest otherwise, living they are not. Yet, such is the illusion, created by Kansas-based artist Aquakej (aka Katie VanBlaricum), who collects the carcasses of insects from all over the globe and reincarnates them as exquisite craft and jewelry items. 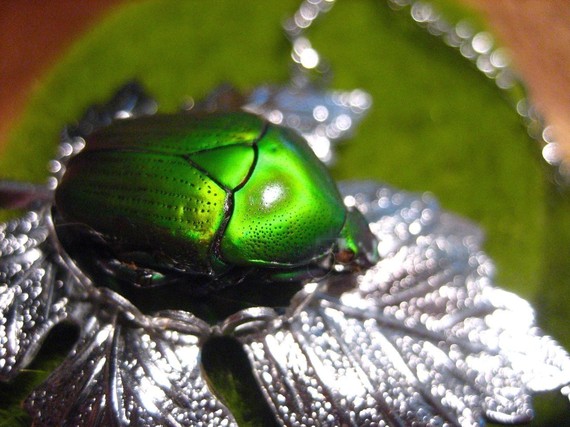 Take the glowing green beetle necklace above; or the flamboyant, framed jewel beetle below, Lampropepla rothschildi from Madagascar, which measures an inch-and-a-half in length, and stares back at you with its turquoise and lime false eyes. 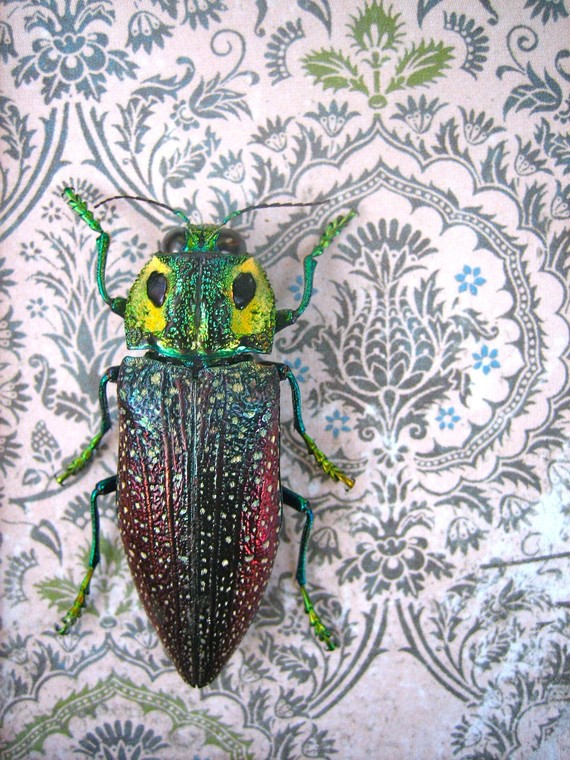 Decorating one’s house with these pieces might not be to everyone’s taste, much less wearing them — which would be enough to make many people’s skin crawl — yet clearly there is a market for these products or VanBlaricum’s Etsy shop would not be open. 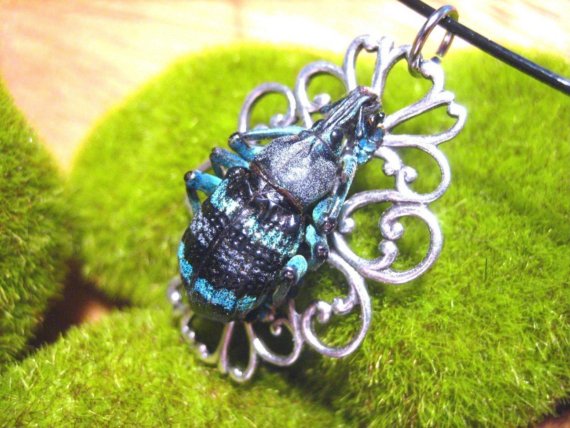 This is recycling of a macabre and to some minds wholly repellent flavor, but it actually ticks the green box, sustainably speaking. As Green Diary explains: “The jewelry is made of dead insects which are provided by farms where they are reared for various purposes. These farms provide livelihood to people from developing countries.” 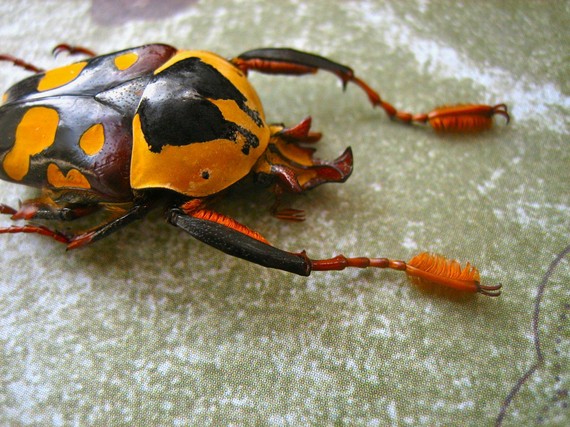 An insect farm might sound like a concept almost as alien as the insects themselves look, but at least no wanton slaughter of the bugs is taking place; rather they’re sustainably reared and harvested in various countries, from Tanzania and the Philippines, to Papua New Guinea and Peru. 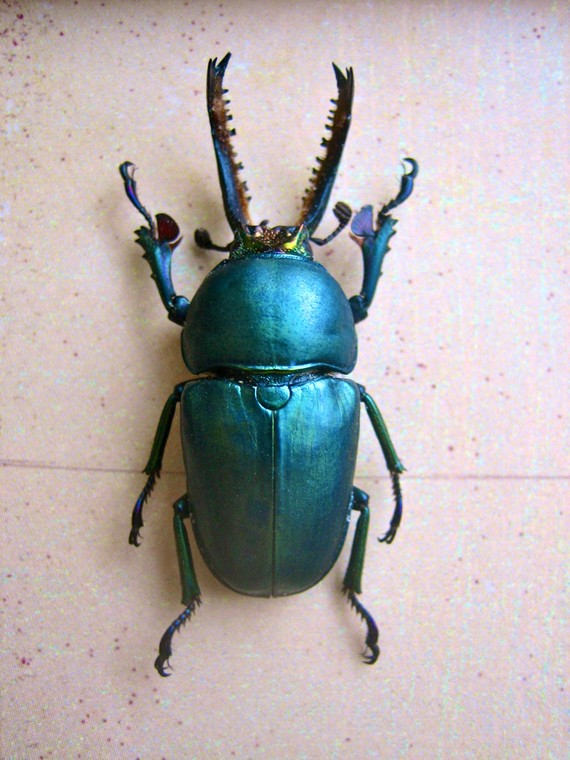 However, the ones VanBlaricum lays her hands on might almost be said to cheat death (or at least the cooking pot), born again as they are under the artist’s revitalizing touch. Explaining how she receives the insects and brings them to life — transforming them into something spectacular — the artist says: 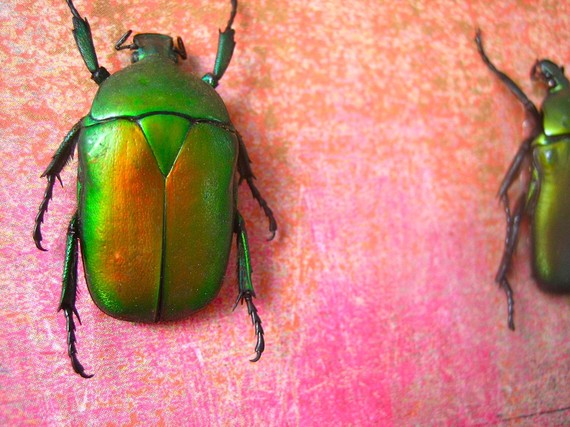 “They come to me dried out and all folded up. I rehydrate them to make them flexible again, and then spread them out on a Styrofoam board with sewing pins and little strips of paper. I do not put any pins through the bodies of my insects; I like them natural looking and lifelike. This makes the insects a bit more difficult to handle, but the end result is worth it. Lastly, I choose an art background for the shadowbox frame and glue the insects onto that. The whole process takes several days, and each end result is unique.” 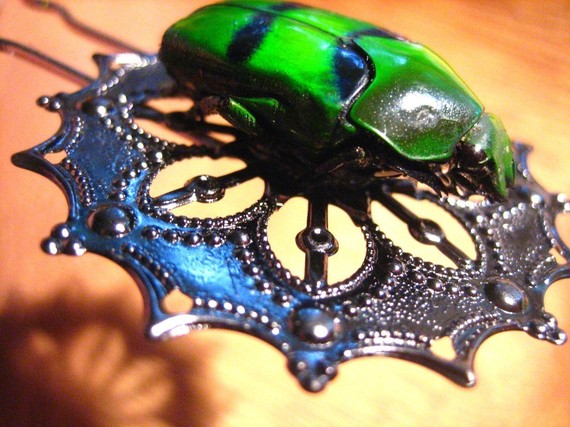 One-of-a-kinds, it’s true, each and every handcrafted piece. Here are some descriptions of some of the best, a veritable bestiary of incandescent creepy-crawlies — be they butterflies, caterpillars, weevils, bugs or beetles from VanBlaricum’s “Living Jewels” series. 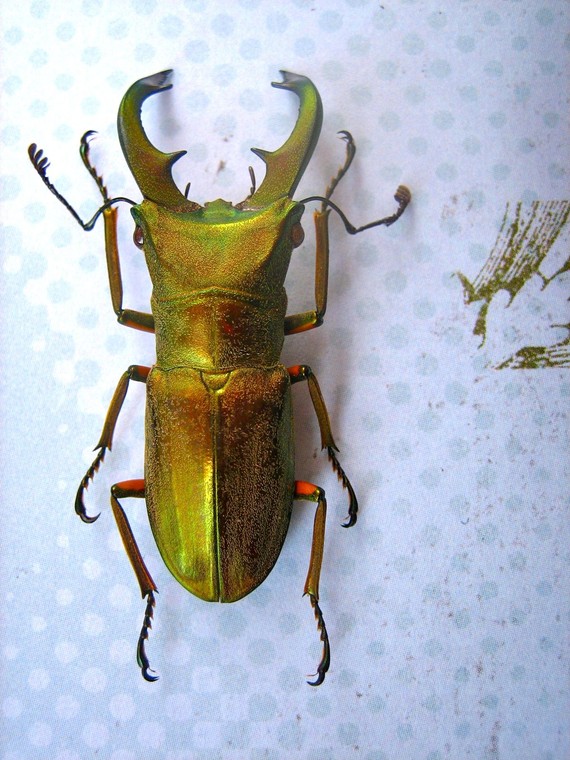 “With his metallic golden sheen, his curious shape and his velvety texture,” this golden Sumatran stag beetle (Cyclommatus cupreonitens) is framed to look “especially impressive and regal… Contemporary and Victorian all at the same time,” we’re told by a suitably evocative sales write-up, which sums up the appearance of this armored monster. 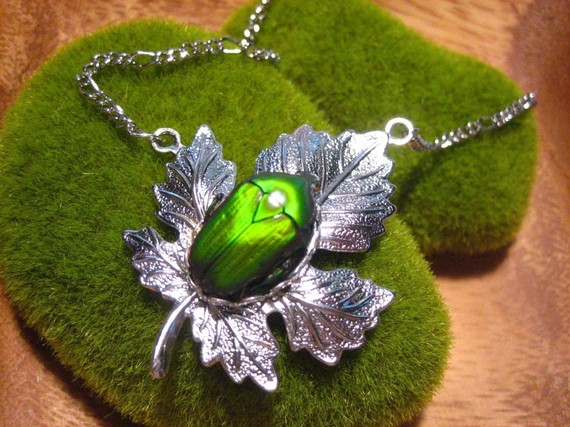 This silver maple leaf is set with a Cetoniid green beetle, less than an inch long, the shell of which catches light with its wonderfully prismatic shell. VanBlaricum explains how the color is in, rather than on, the beetle: “Several layers of light-reflecting pigments create a prism-like finish that is full of glow and depth,” which changes color in different light, being “especially brilliant in the sun!” 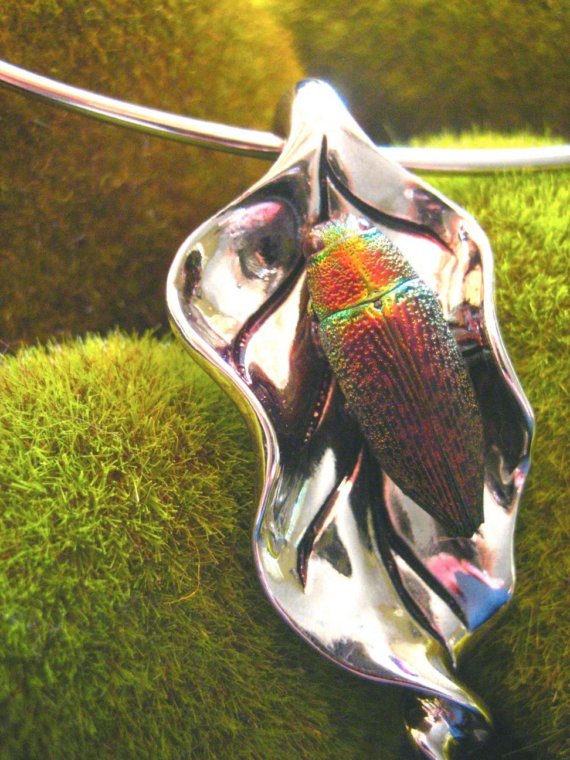 Another wearable beetle that shifts color in different light and is particularly agleam in the sun; “Besides the magnificent coppery-pink color, it sports green and orange tones!” Set in a silver and black leaf pendant, the ridged and pitted texture of this just-under-an-inch-long insect’s metallic shell “helps to create a ‘sparkling’ appearance in the right light.” Nature’s own glitter. 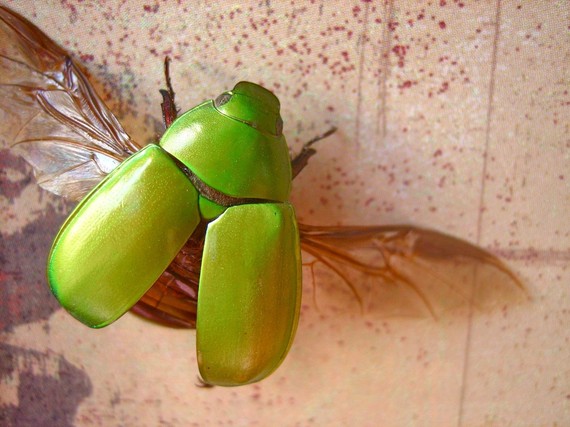 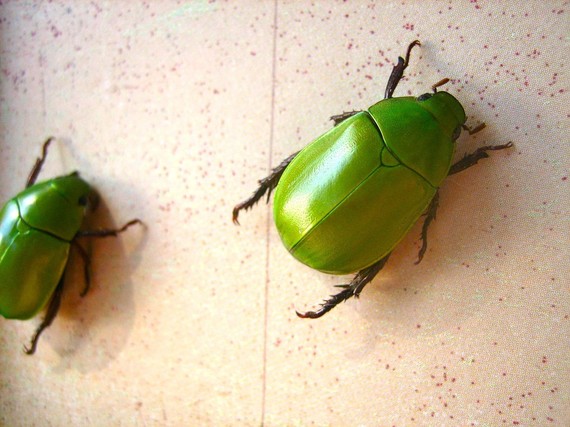 “A quintet of real scarab beetles (Rutelid sp. from Thailand) takes flight against a warm sand-colored background that elegantly showcases the silky olive green color of the beetles,” reads the description of this swarm of inch-long insects. “Their green color is embedded deep into their shells, and is therefore slightly metallic in nature,” we’re told. Beautiful. 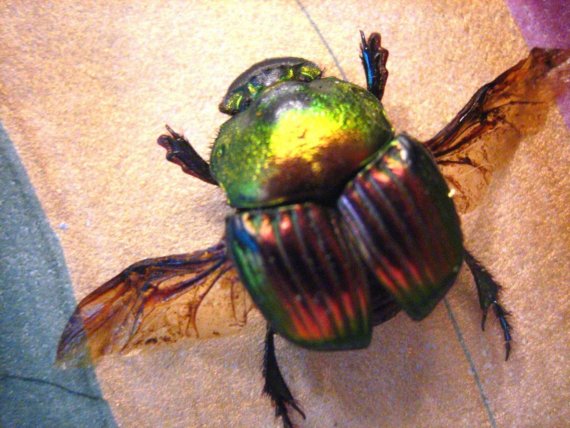 Here’s another dung beetle, this one, Phanaeus m., a native of Mexico. With its dinosaur-like shape and ornate colors, which “change from green to pink, depending on the light,” it’s the three-quarter-inch-long centerpiece of a gloriously unusual wall hanging. Idolized as sun deities in Ancient Egypt, scarabs have been a symbol of rebirth for millennia, and continue to be so in VanBlaricum’s work. 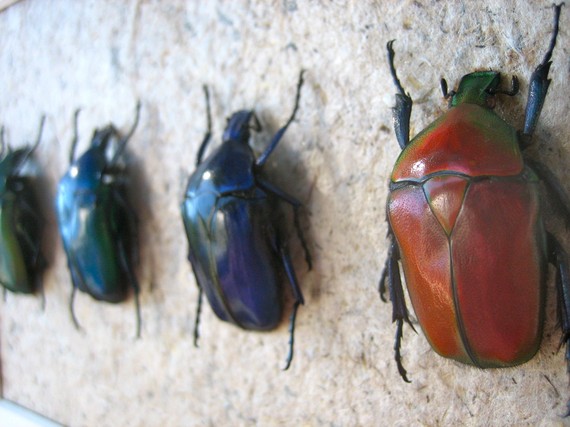 Marching in line, these four beetles, each up to 2 inches long, are like a phalanx in the Roman army. The hues of the two species — Rhomborrhina resplendens chatanayi and Torynorrhina flammea flammea, both from Chiang Mai in Thailand — are totally natural, yet trick “your eyes into seeing layers of color,” creating “the illusion of depth, like looking into a pool.” 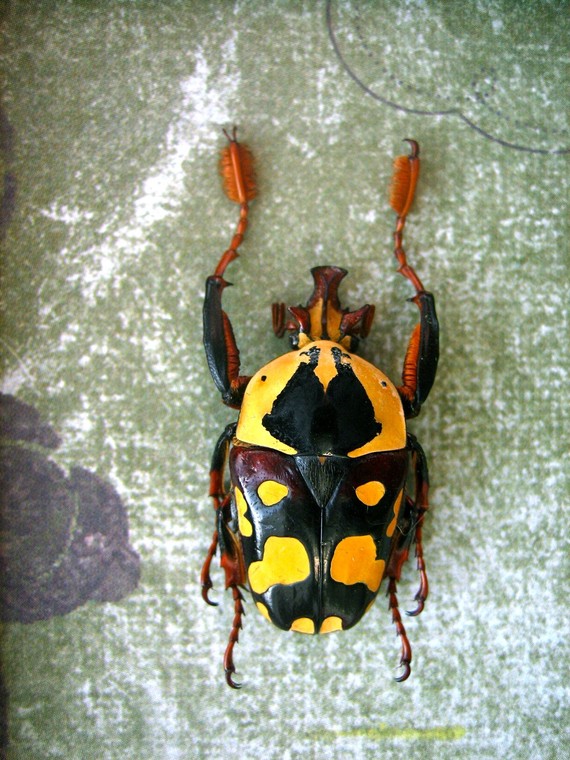 “Check out this guy’s ‘hands’! They look just like bottlebrushes,” effuses the description of this yellow-and-black mottled monster of a beetle. Too true. Just more than an inch in length, this African species, Cheirolasia burkei burkei from Zimbabwe, nonetheless seems to punch above its weight by virtue of its brawny, powerful appearance, “burnished texture” and cautioning coloration. 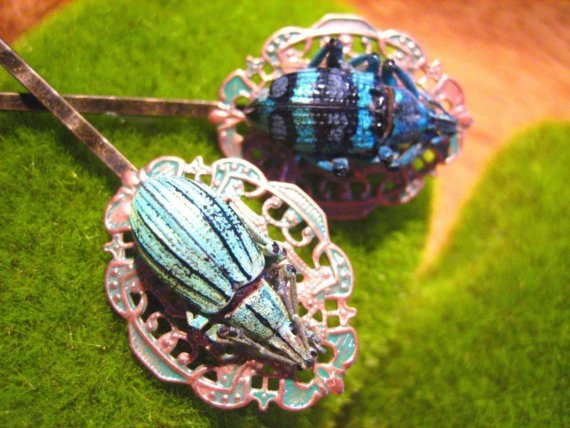 Not fond of people touching your newly styled hair? Then these hairpins could be just the thing. Sure to repel anyone even slightly squeamish about insects, these three-quarter-inch-long weevils — bane of many a sailor’s biscuit in days gone by — sport slightly rough-textured yet mellow-colored shells in sea green and indigo tones. Meet Celebia arrigans and Eupholus magnificus! 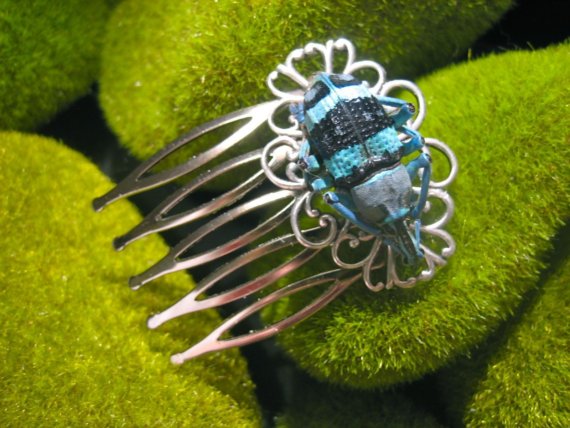 And here’s another “gorgeous weevil that reflects light in a soft yet brilliant way off of its wonderfully textured shell.” This one is a metallic turquoise and sea green-colored Eupholus specimen embellishing the back of a hair comb — perfect for anyone keen to take up or carry on the indigenous South and Central American tradition of wearing beetles as body decorations. 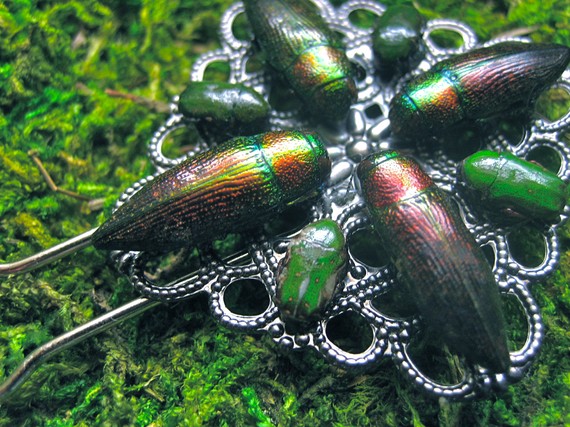 A hairstick incorporating no less than eight beetles into its almost kaleidoscopic pattern, this is an accessory for insect lovers who wear their passion proudly. Yes, four Lampetis viridicuprea and four smaller green Cetoniidae sp. specimens, both from Thailand, are artfully arranged to form a piece that measures 4 inches from top to bottom. Who said big isn’t beautiful? 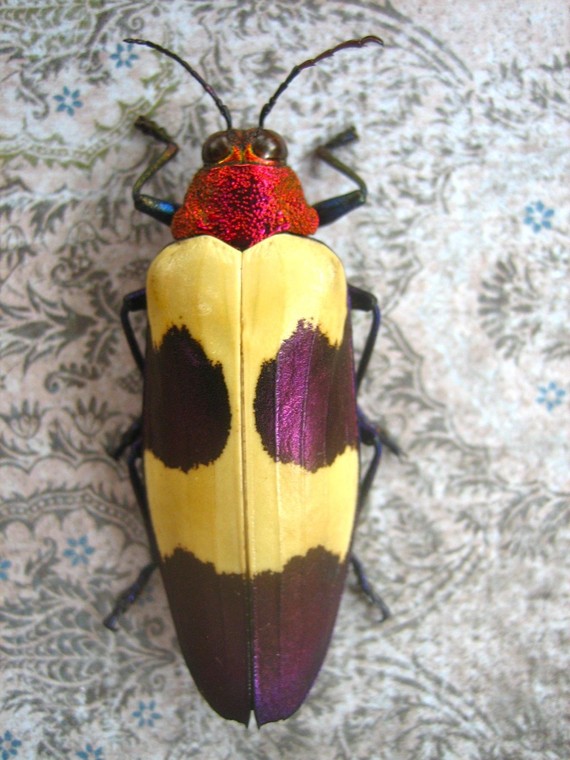 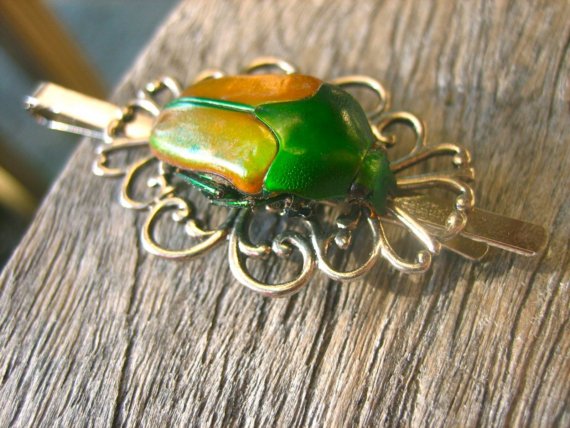 “A real green and gold flower beetle, Lomaptera lucidula from Indonesia, decorates this Victorian filigree tie clip,” informs the marketing spiel — and what a beautiful beetle it is, all three-quarters of an inch of it, even with its wings glued shut. Also usable as a hair pin, it’s one of VanBlaricum’s many pieces that demonstrate the durability of beetles, both in life and death. 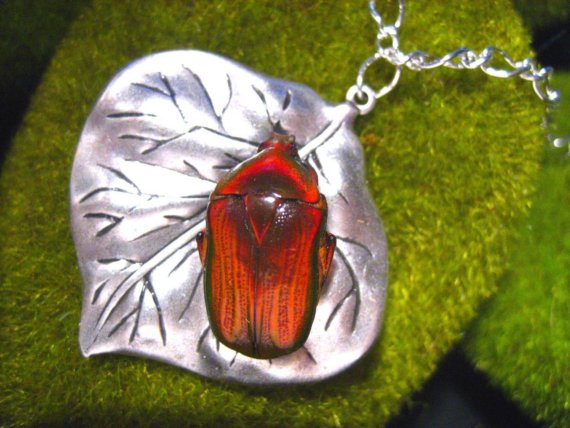 This next three-quarters-of-an-inch-long red flower beetle, lying dormant in a silver birch leaf necklace, is another whose prism-like shells spell different shades of color — olive green tones as well as the more obvious flame red. “Made to live outside,” beetles are, we’re reminded, “fairly water- and scratch-proof,” armed with nature’s own protective materials, which the insect artist utilizes to full effect. 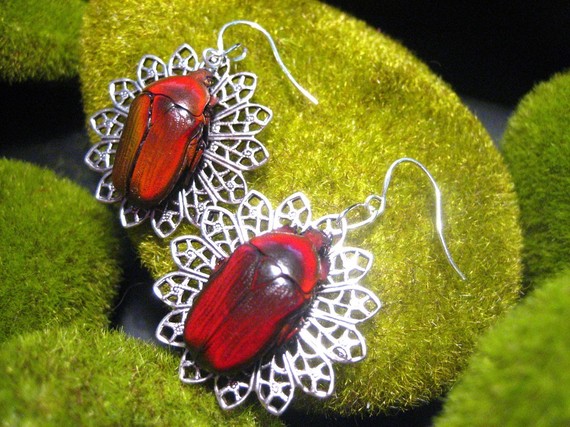 More red flower beetles, Heterorrhina leonardi from Thailand, these ones are set into a pair of silver snowflake earrings. Dainty they may seem, but these beetles were built to withstand the elements. As VanBlaricum says, expanding on the toughness of the materials she works with: “The chitin that makes up the beetle’s hard outer parts is one of the most durable materials in the natural world.” 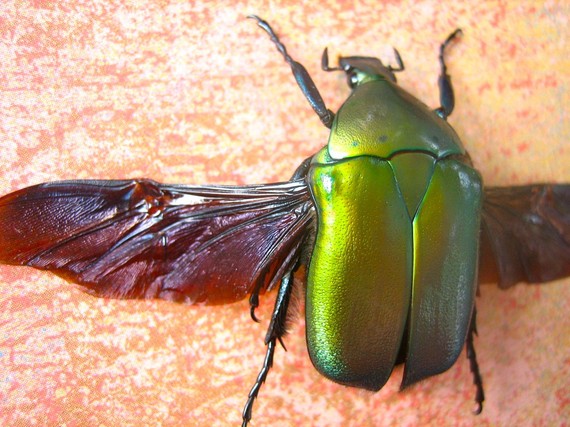 The 1½ inch-long flame beetle visible in the wall art piece above (Torynorrhina flammea from Thailand), and the sumptuously flower beetle (Ischiopsopha bifasciata from Indonesia) hair stick below are a suitably glorious way to begin to close the wing cases on this post. 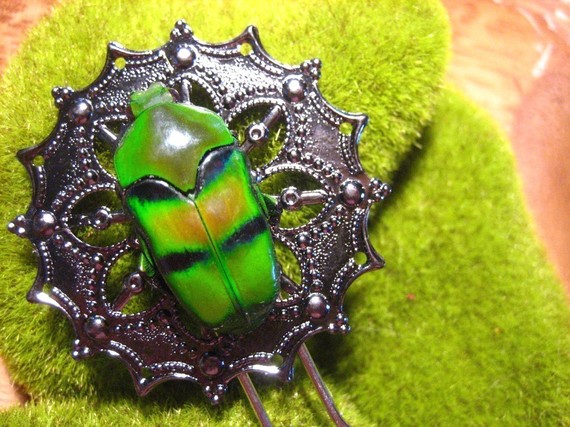 VanBlaricum’s work has its roots in a lifelong fascination with insects that started with the science books her mom read her as a girl, plus her childhood hobbies of collecting cocoons and caterpillars and studying all things bug-related. An entomology class at college revitalized her interest in insects and gave her the training she needed to be able to display them properly. 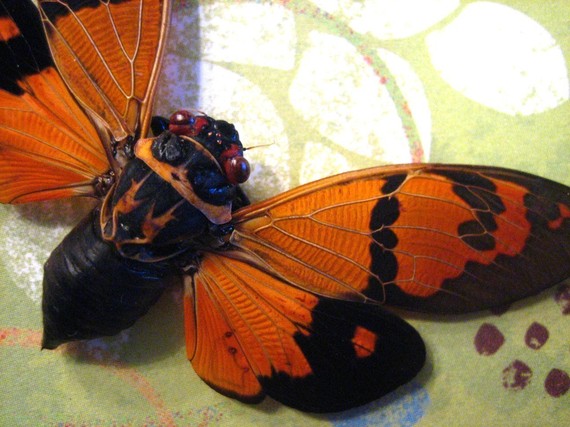 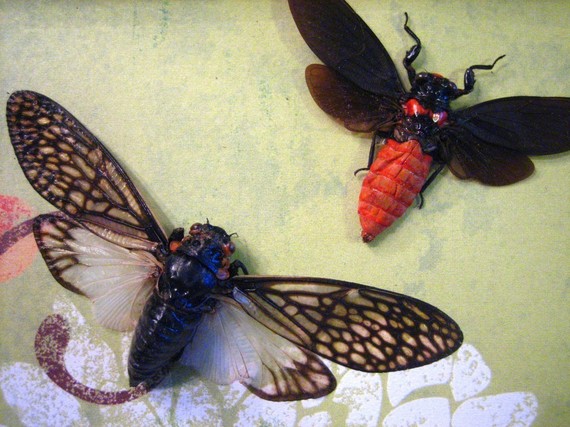 Very soon her first piece of “Insect Art” was brought to life — a collection of cicadas — and she hasn’t looked back. She says, “I always get a kick out of seeing people’s reactions when they find out the bugs I use are real. Some people don’t like ‘bugs,’ but they say my pieces are beautiful, regardless. That makes my art venture worthwhile.” 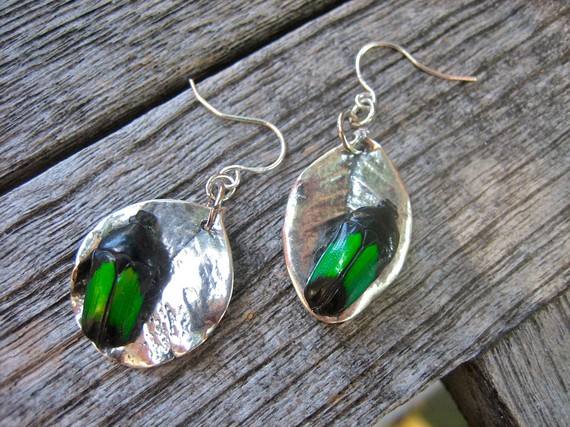 To order your own piece of bug-based home decoration or jewelry — the earrings above even feature real leaves dipped in silver! — visit the artist’s Etsy shop online. The insects are a sustainable crop in the rainforests in which they are reared or caught, and help provide an income for people in developing countries while motivating them to preserve their habitats. And remember, you can do so without the guilt, says Green Diary, of “wearing insect species into extinction.” Got the bug for this peculiar brand of eco-chic yet? Thanks to Katie VanBlaricum for granting permission to use the wonderful images of her work in this post.