What if a recycled cardboard device became your latest gadget? Trust British designer Kyle Bean — you might like it better than your current one. 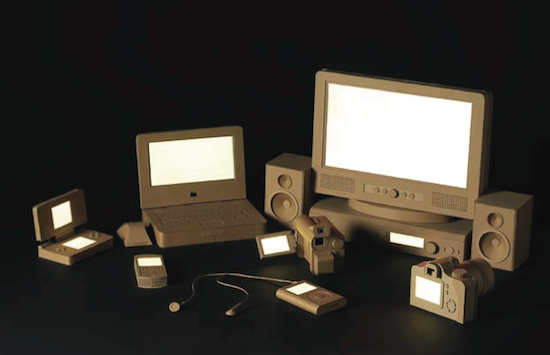 All images courtesy of Kyle Bean.

Thinking about getting a new iPod, laptop or cell phone? How many of us buy the latest model just to discover a short while later that it’s already outdated? And how much of it is just about having a flashy gadget rather than needing all its features? In which case, we might as well just display the fancy cardboard boxes in our homes to show that we’re part of the gadget club. 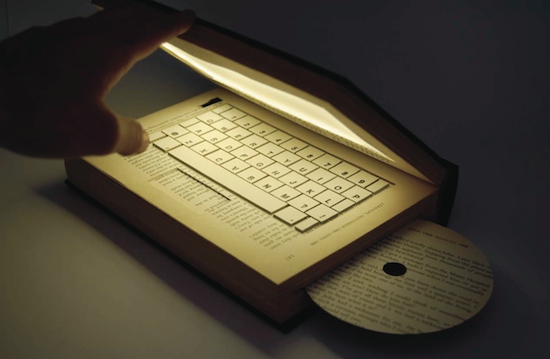 Or you could go a step further, following the lead of Brighton, U.K.-based artist Kyle Bean, and create cardboard boxes shaped like the gadgets! Bean’s “Cardboard Technology” series features a brilliant array of cardboard models of gadgets — a response to the environmentally disastrous consumer relationship with technology and obsolescence. As Bean says, “Technological items are now said to be effectively ‘disposable’ because of this and living in our ‘throwaway society’ just adds to the issue. My solution… Cardboard Technology!” 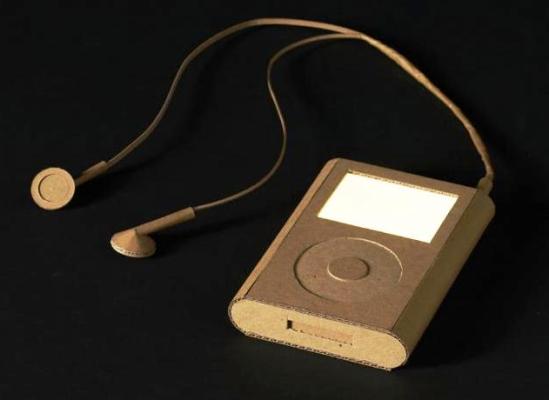 And Bean should know, because he worked part time in an electronics shop when he was in college. He remembers being shocked at how fast products were outdated: “Laptops, mobile phones, cameras, televisions, etc. — the lifespan of these products seems to have decreased rapidly, not simply because of the notion of ‘built-in-obsolescence,’ but because as consumers we constantly crave the latest and greatest new gadgets. As a result, technology has in essence become disposable.” 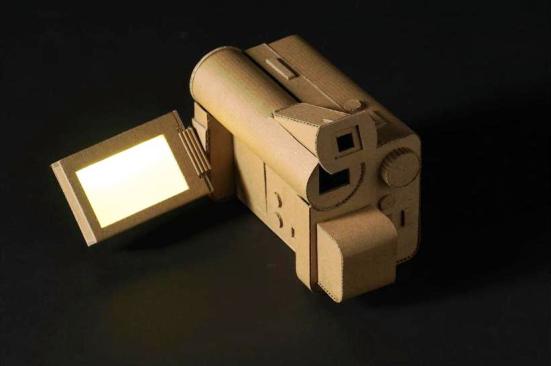 A scary thought indeed, and a trend with disastrous consequences for our environment. Take a wild guess at how much electronic waste is produced globally every year. Maybe 10,000 tons? One hundred thousand tons? One million tons? You’re way off. It’s a staggering 50 million tons of e-waste, every year. The U.S. alone discards 30 million computers yearly, and Europe 100 million phones annually. How much of this is recycled? Unfortunately, only 15 to 20%, or 7.5 to 10 million tons. The remaining 40 million or more tons of electronic waste goes into landfills, many of them located in developing countries. Out of sight, out of mind seems to be the e-waste solution. 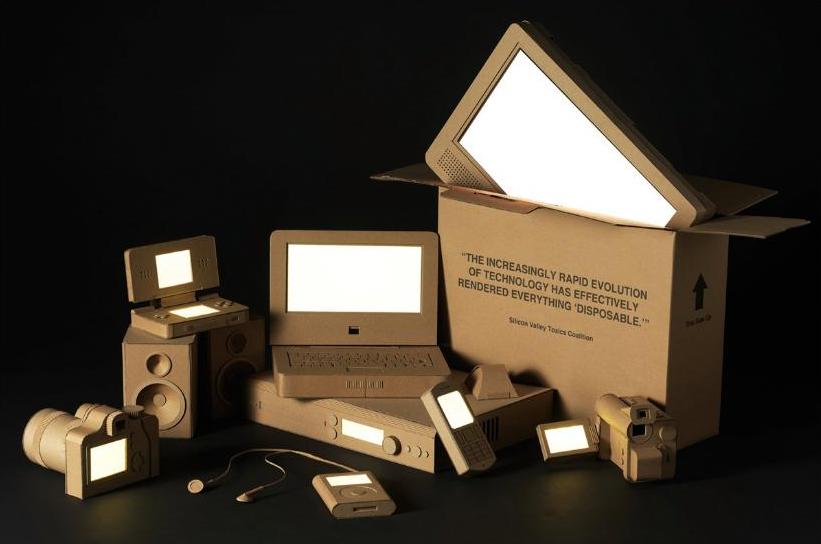 Thus it seems Bean is on to something, not only focusing our attention on the issue of wastage, but also on the need to recycle. Bean counts cardboard as one of his favorite materials to work with and so collects it whenever he comes across reusable pieces. Practically all the cardboard used for the “Disposable Technology” series was salvaged from around the town of Brighton, in England, or came from previously collected cardboard boxes. Bean only had to go to the stationary store for the curved elements that required thinner cardboard. 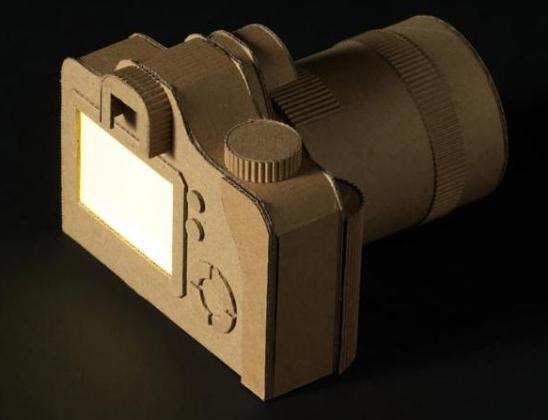 Bean explains that the series is all about the waste and recycling of electronics: “’Disposable Technology’ is a conceptual model based on this observation. I wanted to illustrate physically how quickly we dispose and upgrade our electrical products. Cardboard was the perfect material to use to show this.” 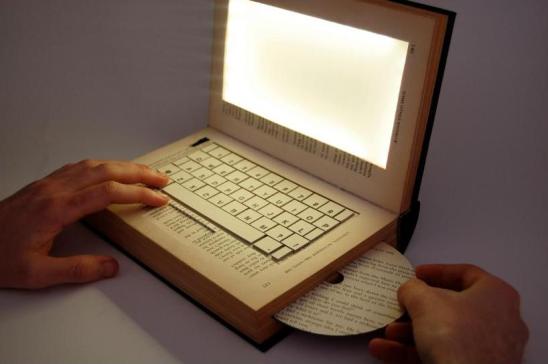 “The Future of Books” is another one of Bean’s thought-provoking projects. Here, he’s taken a secondhand hardcover book that he bought at a charity shop and carved it into a laptop, complete with screen, keyboard and CD-ROM drive. His aim was to show the effect that current technology and the Internet are having on the way we source information. 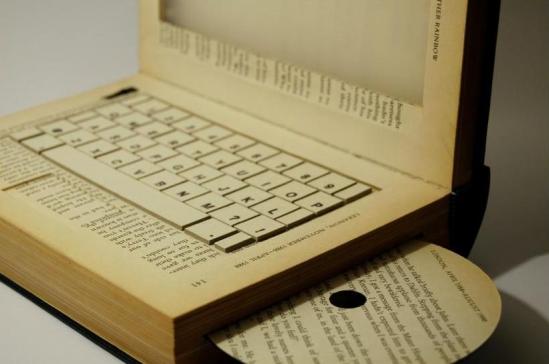 The keyboard is removable and hides the battery that powers the screen light, which turns off when the book is closed. On the bookshelf, it looks like any other regular book. A bit boring when shelved, maybe, because apart from the spine that reads, “The Future of Books,” no other markings adorn the blue cover. But then, we already know not to judge a book by its cover. 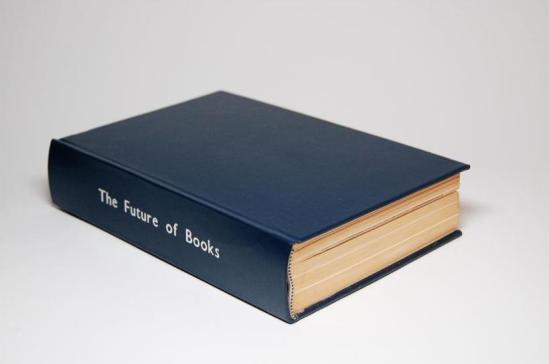 Bean says, “Books also have personality — they have textures and smells which the Internet can’t offer.” As society has become ever more virtual, we download music, books, movies and information from the Internet rather than accessing [them] in a library. It may be the practical and contemporary thing to do, but aren’t we missing out on something tangible in the bargain?” 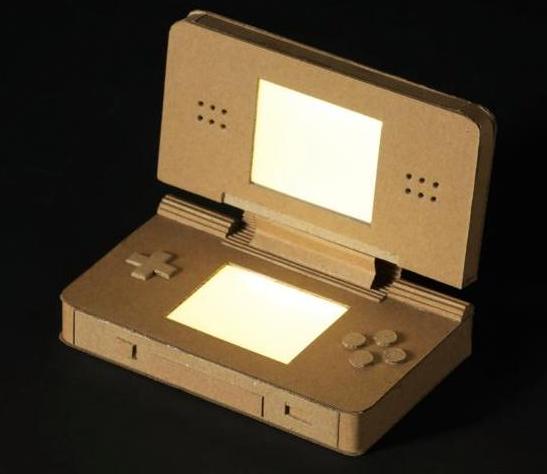 Bean studied from 2005 to 2006 at the University of Portsmouth in England, and from 2006 to 2009 at the University of Brighton, where he graduated with a B.A. (Hons.) in Illustration. He has taken part in many exhibitions in Brighton, London and France, and created shop window displays for Selfridges, Liberty and Hermes. Other clients include Diesel, the BBC, The New York Times Magazine, GQ and many others. The young artist, designer and animator is represented by Blinkart. Special thanks to Kyle Bean for sharing information and images. To see more of his work and his other creative cardboard projects, visit his website. Sources: 1, 2, 3