These programs improve quality of life on the second most populated continent while practicing reuse and recycling.

For the 1 billion residents of Africa, life on their 11.7-million-square-mile continent hasn’t exactly been all sunshine and roses. The exotic environmental flora and fauna may be enchanting, but it’s hard to appreciate one’s surroundings when endless civil wars and internal strife result in an astounding 9 million total refugees, long-standing political corruption, horrendous human rights violations (such as the forced recruit of child soldiers and systematic rape of women and children), chronic drought, tainted water supplies, widespread disease and mass starvation. Clearly, our planet’s second most populous region has endured enough of its own problems throughout the decades, prompting the global community to rally on its behalf through fundraising and financial aid. Given the vast scope of Africa’s diverse challenges, educational programs and tools have ended up having the most positive and widespread impact on its people (rather than cold hard cash alone), but it’s been an uphill battle that must be consistently reinforced. Somewhere along the way, highly industrialized nations decided to heap insult upon injury by dumping their unwanted trash into Africa’s back yard. While their highly populated urban centers are admittedly responsible for generating an ever-burgeoning volume of domestically produced waste (made all the more problematic since there is no real management infrastructure in place), countries from all around the world continue to fuel an illegal e-waste disposal industry that has transformed multiple African dumping sites into highly toxic eyesores. It’s not all doom and gloom, though. There are many individuals and organizations that have embraced a “lemons to lemonade” approach by making the most of the copious amounts of waste that continue to saddle Africa or offering valuable recycled tools. Here are a few inspiring examples that will (hopefully) make you reassess what you put in your own garbage can. 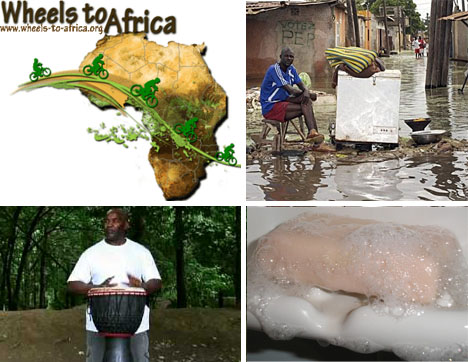 In order to ensure that that their flood-prone homes endure the relentlessly rainy season without springing a leak, residents of Guédiawaye, Senegal, habitually line their floors and walls with tightly packed garbage covered with sand. This unusual building tool is sadly in plentiful supply, and while it enables them to avoid drowning, it also inadvertently exposes countless families to disease bred in stagnant, garbage-infested water.

Music to your ears, crafted from a notorious eco-scourge

In the Western World, conveniences such as soap are easily taken for granted, whereas in Third World regions such as Africa, suds can make the difference between sound health and outbreaks of disease. The “Soap for Rubbish” program reinforces positive personal grooming and sanitation practices by rewarding residents of Chembe Village with a bar of their very own when they successfully deposit organic and inorganic garbage collected from the immediate region into designated drop-off sites.

Two-wheelin’ for a better quality of life

If basic resources such as food and clothing are challenging to afford, imagine how out of reach the purchase price of a bicycle might seem to someone with compromised financial means. Many African families are faced with precisely that conundrum, which is why Wheels To Africa organizes American bicycle donation drives. Western two-wheeled castoffs end up significantly enhancing the lives of their African recipients, making it easier for them to access to school, work and regular health care or obtain daily necessities.