Artist Josh Blackwell mixes creativity and reuse together in the name of sparing landfills.

Very few men earn their worldly fame due to unexpectedly wicked powers of embroidery (nor do they actually live to tell the tale), but fortunately, Josh Blackwell is a rare exception. Sewing heavy-gauge thread onto cotton canvas isn’t what one might consider an artistic revelation, but stitching rainbow-infused patterns upon an ever-changing lineup of reclaimed plastic shopping bags? Well, that certainly compels one to sit up and take notice. 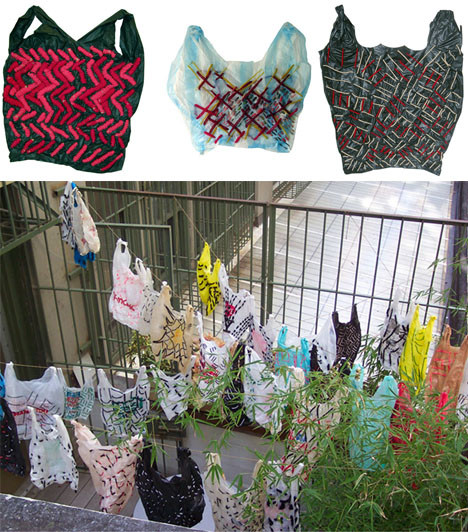 But plastic bags? Let’s just say that they’re not exactly winning any popularity contests these days. Once seen as rather handy and certainly dandy, one-time-use polyethylene bags, which burst onto the shopping scene in the early ’80s, are now widely regarded as among of the worst environmental plagues that man has ever created. Such a shame, really, because in the span of just a few decades, what began as a seemingly indispensable invention on par with tissues and cotton swabs has unfortunately morphed into tree branch-tangling, landfill-stuffing, ocean-clogging, wildlife-threatening nuisance. And let’s not get started on the billions of gallons of oil consumed in the manufacturing process. In true artistic fashion, however, Blackwell has made the best of a bad situation. Since we’re swimming in unwanted plastic bags, why not transform them into upcycled canvases? The artist’s unusual quest began back in 2004 when, upon recognizing the ubiquitous and particularly harmful qualities of one-time-use shopping sacks, he began amassing as many as he could with the simple intention of sewing them shut. 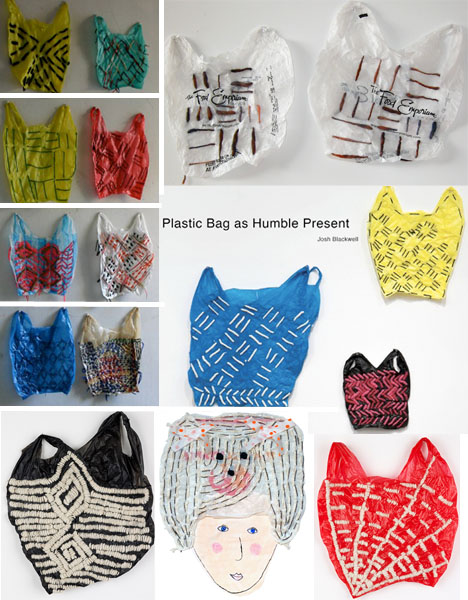 His efforts, he hoped, would negate their harmful qualities — not only by denying plastic bags their innate function, but also by “revealing their essential necessity.” As Blackwell identified a correlation between society’s capitalistic tendencies and our deeply imprinted instinct to buy more, his sewn bags naturally morphed into an entirely different animal altogether. The resulting collection of thread-studded shopping bags — emblazoned with a flurry of varied textures and patterns — are as attractive as they are jarring, since each work is technically emblematic of our perpetually disposable mentality. Still, the artist has managed to create beauty out of that which has become a pox on our natural landscape while spreading the subtle message that something’s got to give. Not surprisingly, his unique artistic venture has garnered countless global exhibits and the buzz of multiple newspapers and online venues, resulting in a hot-off-the-presses text, “Plastic Bag As Humble Present.” Interestingly, he even successfully crowd sourced the funds necessary to print his book!