Can trash collages be stunning works of art? French artist Bernard Pras proves that they can by transforming trash into pop icons. 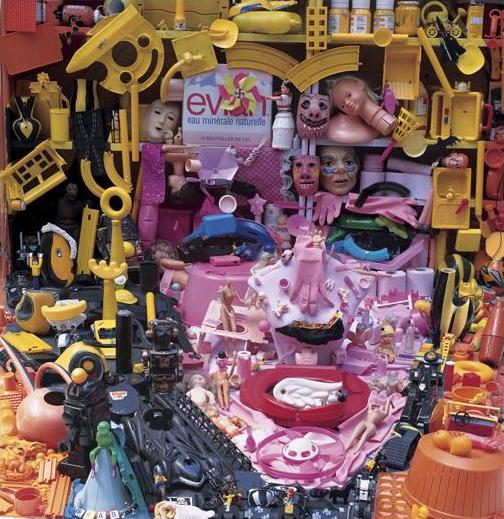 Bernard Pras’ works are simply stunning. At first glance they seem like colorful portraits of pop icons. On a second glance, however, the viewer discovers that they are all made of trash — old toys, clothes, shoes, electronics and more — junk that we would usually throw out. Under Pras’ careful touch, each item takes its place in his compositions and is thus lifted out of oblivion. 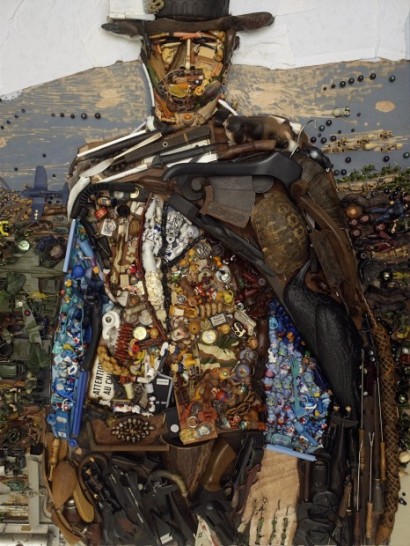 Pras combines the technique of anamorphosis with collage and 3D-installations of images. His greatest inspiration is 16th century Italian painter Giuseppe Arcimboldo, best known for his portraits composed of fruits and vegetables, but also flowers, fish and books. His most famous portraits are The Librarian (1566) and the four seasons, Summer (1573) for example, of which Pras created an homage. 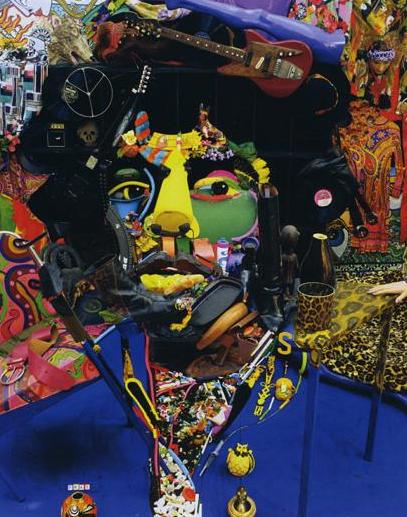 Anamorphosis literally means “formed again.” According to anamorphosis.com, a simple definition is that it describes a “deformed image that appears in its true shape when viewed in some ‘unconventional’ way.” This “unconventional way” can be a certain angle or through a camera lens. Artists like Hungarian painter István Orosz and Dutch graphic artist M.C. Escher have used this technique, but so do most trompe l’oeil paintings on church ceilings. We even still use anamorphic images in everyday life — the most mundane being road markings. Arrows, for example, are drawn extra long so that they appear to be a regular size when approached by cars. 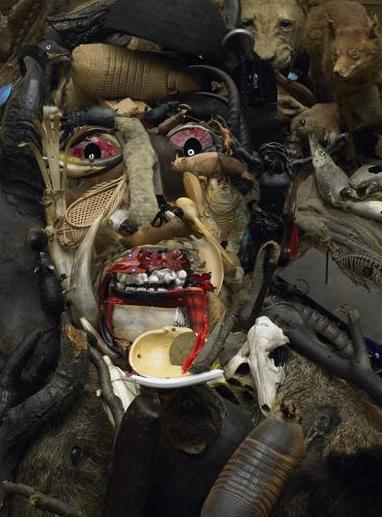 However, Pras transcends both anamorphosis and collage by adding his special touch to each portrait. Taking into account each subject’s field — arts, politics, science — Pras not only chooses each item carefully but also its texture, color and material. Thus, his sense of humor and subtle wit shine through in each portrait. Marilyn Monroe’s portrait (top) is based on Andy Warhol’s famous pop rendition. It is dominated by naked dolls and lots of plastic. Surprised? Her nose, meanwhile, is made from an old pink plastic glove. 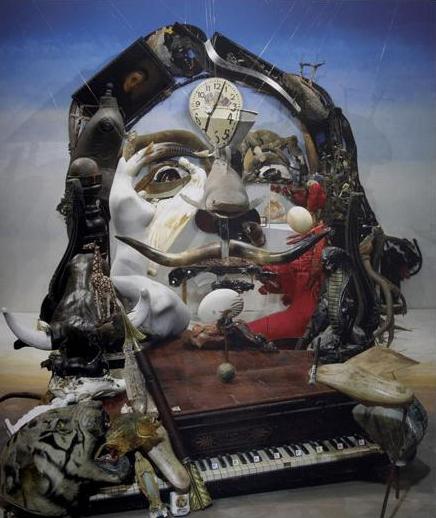 Speaking of noses, Salvador Dali’s portrait (above) got a shark for a nose and it doesn’t even look out of place. Neither do the antelope antlers as the painter’s prominent mustache. One of Dali’s trademark melting watches is stuck to his forehead like a magical third eye. Keeping with the animal theme, we’ve got fish and fowl with the odd tiger and snake thrown in. And check out the grand piano supporting Dali’s head. 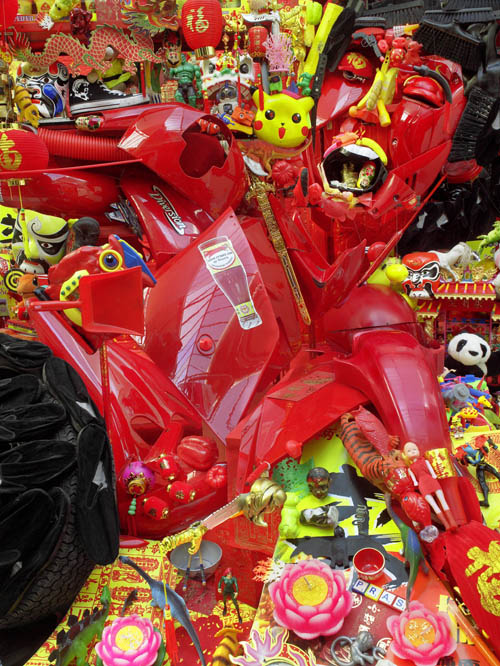 It is a joy to dissect Bruce Lee’s portrait and to discover Pras’ subtle wit deployed with every object. Lee’s body, for example, is kept in red, with a ketchup bottle prominently displayed on the chest, perhaps indicating the movie industry’s source of fake blood. Brooms make up Lee’s hair; black slippers, his pants. Apart from traditional Chinese symbols like dragons, lanterns and masks, there’s also Nemo, Pikachu and the Incredible Hulk. Go figure! 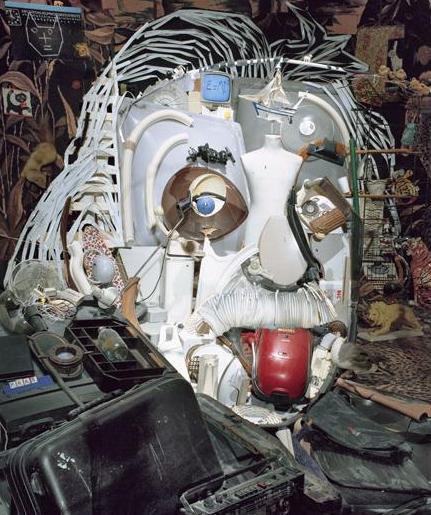 Einstein, fittingly, is made out of discarded pieces of technology, with his best known equation, E = mc2, prominently stuck on his forehead like a Post-it note. And the famous tongue stuck out at the viewer? What looks like a computer mouse is actually a bright red vacuum cleaner. 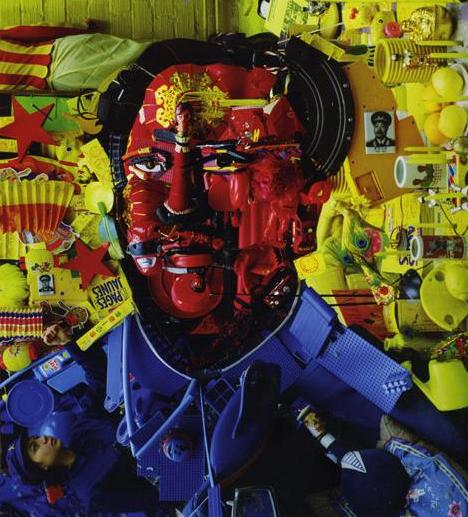 What’s striking about Mao’s portrait above is that it seems almost completely made out of plastic children’s toys in primary colors. Does the red, yellow and blue stand for simplistic beliefs? And the plastic for the molds that communism tries to press everyone into? We won’t know for sure, but it’s fun to speculate. Let’s take a closer look at some other portraits. 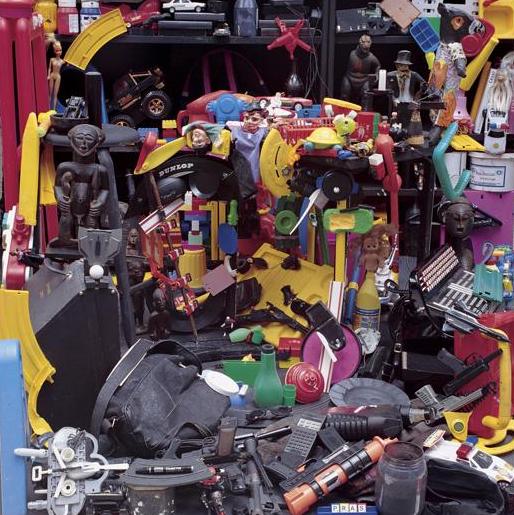 For his Che Guevara portrait, Pras has kept colorful toys and dolls at the center, framed by darker toy guns, weapons and vehicles. Symbolic of a struggle that was humane at the core but turned violent later? Don’t miss the Scrabble tiles spelling “Pras,” center right. 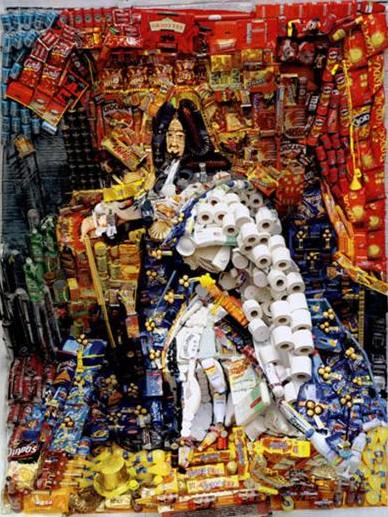 Probably to remind us of the Sun King’s excesses, Louis XIV’s portrait is made almost entirely out of food items like chips, crackers and biscuit packets. Royal red prevails as a background and white and blue for his robes. The latter sees some creative use of toilet paper rolls — to remind us that, in the end, it’s all down the drain?

Uncle Sam is made out of blue plastic planes, trains and automobiles with a few black plastic tanks thrown in for contrast. Casper, the friendly ghost, adorns his hat and the background is made up of cigarettes, neatly placed in rows. Need we say more? 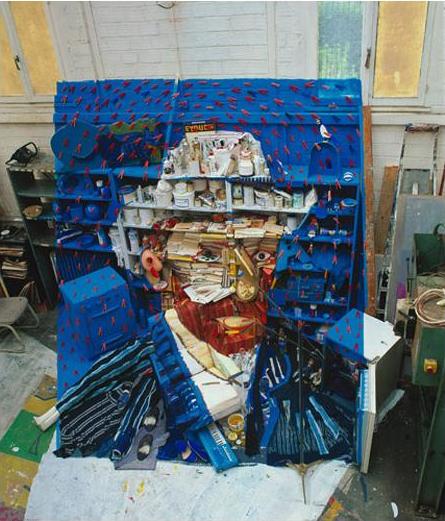 The Van Gogh portrait is a stroke of genius, using three dimensionality to the max by incorporating a shelf into the composition. A fitting homage to a great painter. Just how much space Pras’ installations can take up and what an important role the viewing angle plays is shown in this video of the artist’s Tom Murphy installation in Galway, Ireland, in June 2003. The use of the dark archway as a bald head is simply brilliant! 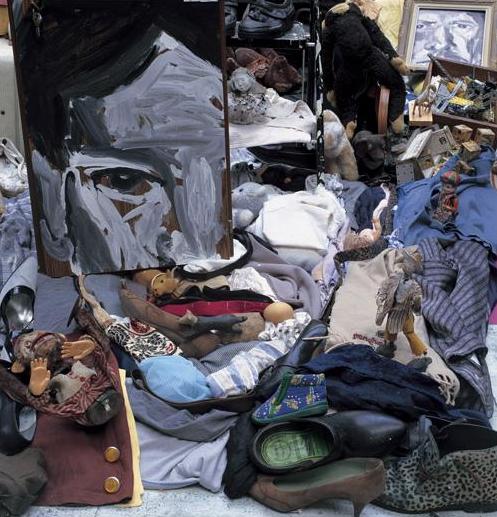 Pras’ self-portrait fittingly features two paintings, some toys and a whole bunch of clothes and old shoes. The artist was born on March 22, 1952 in Charente, France, and was raised partly by his grandmother who introduced him to art. After a brief stint in mechanical engineering, Pras switched to studying fine arts in Toulouse, France, and graduated in 1974. For a few years, he experimented with different forms and styles before discovering assemblage artist Arcimboldo and anamorphosis in the mid-’90s. Since then, his fame has grown, and he has widely exhibited in France and worldwide. Pras currently lives and works in Montreuil, France. Make sure to check out his website. Even if you don’t want to think about the deeper meaning behind each of Pras’ portraits, you can still have fun by simply trying to name all the items each one was made from. It’s “I Spy” at an advanced level. Sources: 1, 2, 3, 4, 5, 6, 7