Tetra Pak Containers: Do They Really Deserve a Green Halo?

With its complex make-up, is the European-born packaging more trouble than it’s worth?

In a world that was perhaps a bit simpler, three basic materials once ruled the stable product market: glass, plastic and metal. Remarkably, grocery shoppers found them all to be perfectly agreeable and went about the task of gamely lining their carts with cans of mixed vegetables, jars of pickles and before too long, trays of microwavable insta-meals. With a limited array of perfectly acceptable choices at their fingertips, life was happiness indeed, but then a whippersnapper Swedish company called Tetra Pak had to complicate things, first by rolling out its aseptic rectangular packing in the European market during the 1950s and then gracing American shores in the mid-1980s. 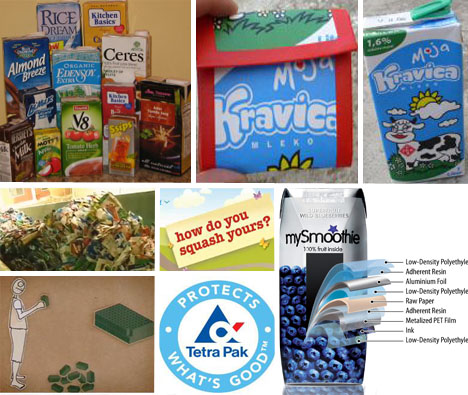 Suddenly, shoppers were faced with the perplexing task of determining whether the new kid on the block was just as worthy of their loyalty as its predecessors. Before they could give it much thought, global tomato, milk, soup, chili, juice and even wine manufacturers began to embrace Tetra Pak’s newfangled containers. In addition to the space-saving, easy-to-store shape and handy dandy portability, the package’s lightweight properties were championed as the reason why using them was a better choice for the environment. Compared to conventional glass (which is heavy and notoriously breakable) or plastic (which leaches all sorts of nasty stuff in our edibles), this quirky package could indeed take a load off of Mother Nature during the transportation process. With fewer trucks required to ship a larger volume of products, efficiency was touted as a major reason for eco-celebration. Less fuel would be required to ship them! Less exhaust would then be released into the atmosphere! For a truly streamlined carbon footprint, they insisted that Tetra Pak was the way to go! Now that we’ve had many years to research the pros and cons of Tetra Pak containers, the eco-reviews are mixed. Unlike glass, plastic and metal containers (which can all be melted down and reused with relatively minimal effort), Tetra Pak boxes are notoriously challenging to recycle since they’re constructed with seven different and very incongruent layers. Seventy-five percent of the packaging consists of admittedly recyclable FSC-certified wood pulp, but it’s unfortunately sandwiched between alternating wafers of plastic-based resin and polyethylene (20%) as well as a 6-micrometer-thin panel of aluminum foil (5%) — and let’s not forget that metalized PET film and ink are thrown in for good measure. The result is a hodgepodge of materials that are as compatible as oil and water. Not that the innovative aseptic container is impossible to recycle. Europeans, who have enjoyed using the distinctive food package for the better part of 60 years, have proven with their 33% recycling success rate that it is indeed possible. Oh wait… it turns out that they actually burned them for energy. Somehow, it doesn’t quite seem like that “counts” if you’re batting for Mother Nature and concerned about limiting the amount of toxins released into the atmosphere. If recycling programs across America and the rest of the world truly want to take on the whole Tetra Pak recycling beast, there’s no denying that the process from start to finish does seem rather complicated and messy. First, you have to actually get people to return their empties, and, well, good luck with that. Then you have to pulp all of the reclaimed containers into a slurry of funky bits — bits that, by the way, are punctuated with bobbing plastic pour spouts, caps and necks. This is where things get rather tricky: Isolating the polyethylene and aluminum particles from the liquefied paper porridge is not for the faint of heart. The good news is that the former two materials can be pelletized together into a specific type of “plastic wood” that injection-molding machines can then transform into items such as new garbage pails, roof tiles and benches, so that’s a plus. Oh, but then you finally have to figure out what to do with the remaining paper goo, which, due to its compromised fiber quality, would have to be converted into writing paper and assorted types of bathroom tissue. The world will always need Kleenex and Charmin, so at least something good can come out of all that Tetra Pak recycling labor, but at what true cost? Here’s a friendly tip to consider before you bring any Tetra Pak containers into your home: Find out if the recycling program that you participate in actually accepts them. If you really like the convenience of aseptic boxes but your municipality doesn’t yet responsibly process them, consider how you can personally repurpose them, whether you choose to craft a coin purse, plaited “catchall” basket, woven pocketbook or zippered pencil case from your thoroughly washed leftovers. Otherwise, stick with conventional food packaging that has an indisputably green track record!