Giant Walls Made from Thousands of Old Keyboard Keys

QWERTY, letters familiar to any keyboard user, are not usually associated with art or recycling. But for Sarah Frost, those keys are transformed into beautiful installations. 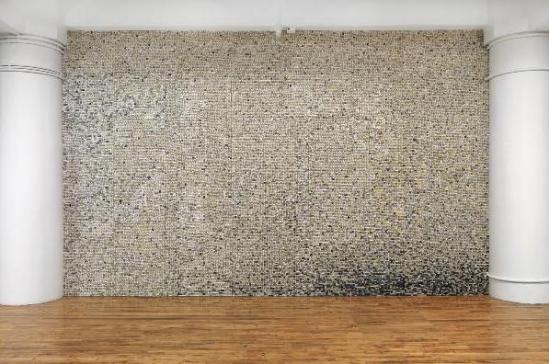 All images courtesy of Sarah Frost and used with permission.

What looks from afar like a giant mosaic wall reveals itself on closer inspection to consist of thousands of reused keyboard keys. St. Louis-based artist Sarah Frost is the creative mind behind this massive keyboard wall. She has created several walls to date, with aptly chosen names like Debris and QWERTY. Seen as a whole, they seem like the keys of all the old keyboards we’ve disposed of in the past, amassed and back to remind us of their demise. 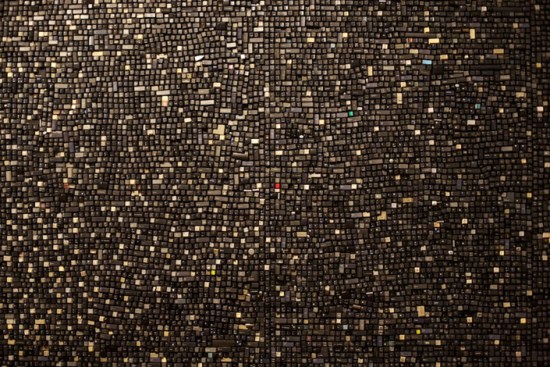 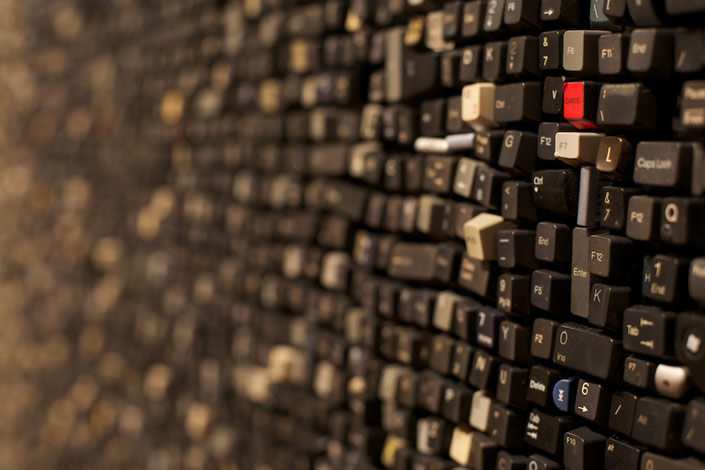 Have you ever noticed how certain keys on your keyboard get dirtier than others? Enter, shift and the space bar are perpetually dirty. And, rather than providing a sterile look, Frost has preserved the keys as they are: grimy and worn out, to give her artwork a “real” feel and to reflect on the people who used the keys in the first place. 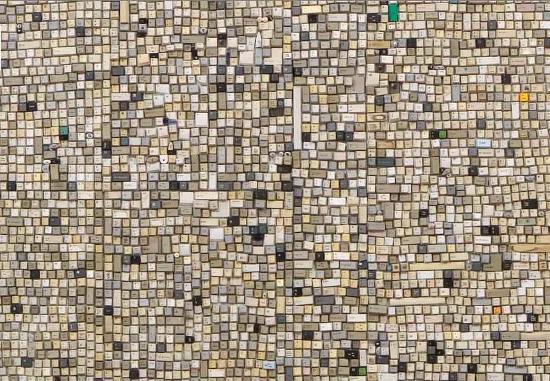 She says about the idea behind it: “It’s interesting to me what these objects say about their users as individuals and as part of a culture… Each key has a unique history and bears the residue of its user — each has been personalized by wear pattern, handwriting, grease marks and even nail polish.” 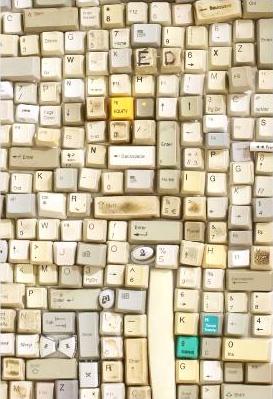 Though Frost’s installations strongly resemble mosaics, the connection was coincidental, as the form and outcome of the artworks were dictated by the material and the space she worked in — being a museum, an art gallery and a hotel, each with their own room structure, texture and atmosphere. Frost explains: “Each piece is site specific, so the design is driven by the characteristics of the space it is in and how the viewer approaches and moves through that space.” 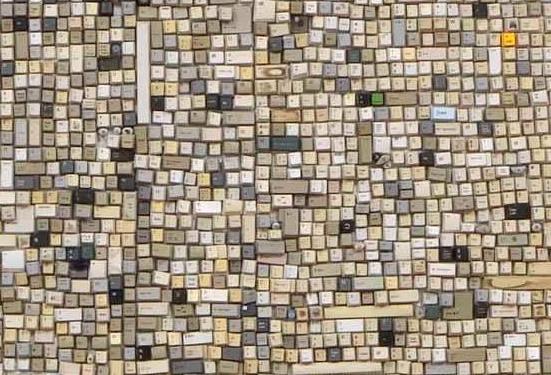 There are two obvious questions associated with a project of this scale: how did it get started, and where did the artist get her raw materials from? Talking about how she came to choose old keyboard keys, Frost says: “The keyboards are appealing because they are ubiquitous… [They] are part of a broader exploration. I am interested in cast-off objects that show their history and evidence of use. The keys grew out of an earlier exploration of obsolete communications technology, including materials such as computer mice, SCSI cables and telephone cords.” 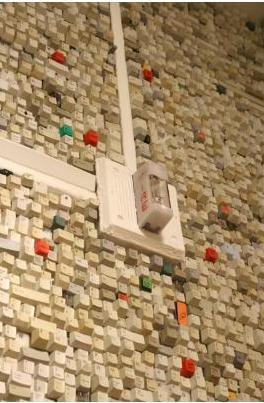 As suggested earlier, individuality was key (pun intended!) for this project, and to guarantee a good cross-section of computer users, Frost approached many different sources for her materials, including individuals, manufacturing plants, Fortune 500 companies, stockbrokers, small businesses, government offices and even a grocery store chain. The main suppliers were various electronic recyclers, but Frost also got some old keyboards at garage sales and from individuals. 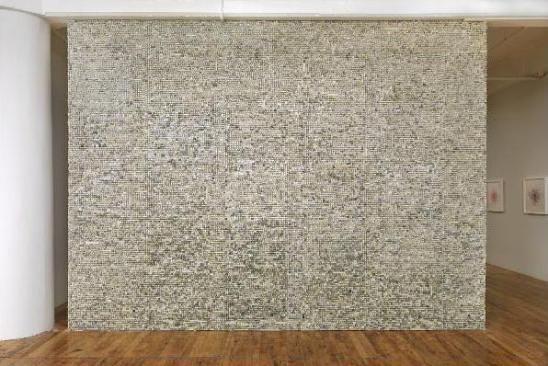 It was also intended that the individual quality of each piece of the artwork should disappear from the viewer when looking at the whole. Frost explains: “While this individuality is apparent upon close inspection, on this large scale, it is lost in the overall mass at a distance. The tension between individuals and whole systems is a theme in much of my work.” 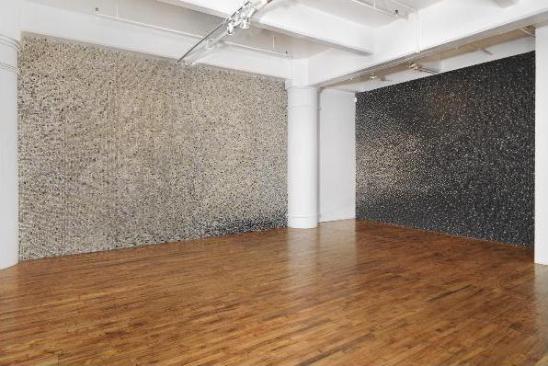 We could see this becoming the latest in interior design: Instead of mosaic tiles for the walls, why not use old keyboard keys? If you’re inspired to create your own personalized mini artwork out of an old keyboard, just strip off the keys, glue them to boards in the order you want, and you’re done. At least that’s how easy Frost makes it look. Though we’re sure, for an artwork of this magnitude, a lot of hard work and coordination is involved, not to mention a true sense of artistic vision. 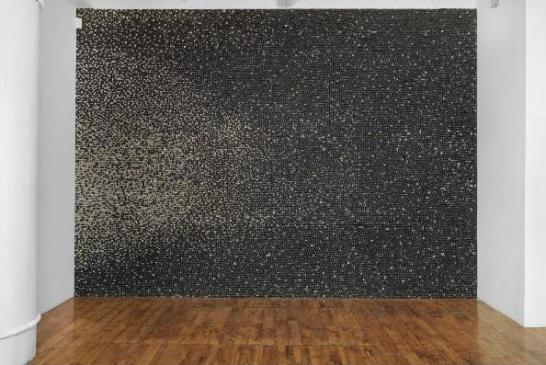 It’s good to hear that Frost is not tiring of keyboards as yet. She says about her plans: “If the opportunity to work in an exciting space comes along, I can see doing more. Yes, there will come a time when I no longer work with keyboards. But I bet that exploring cast-off objects and forms will continue to engage me for a long time.” 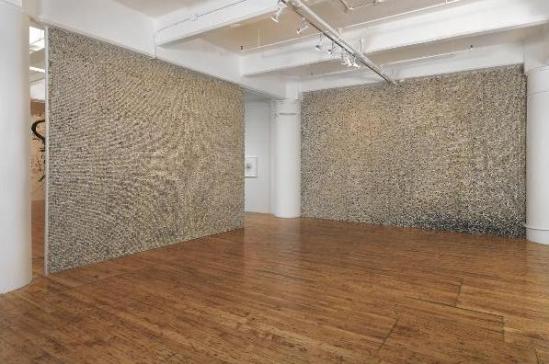 Originally from Detroit, Sarah Frost grew up in Rochester, NY, and moved to St. Louis to study. She received her B.F.A. in Painting from Washington University and her M.F.A. in Sculpture from Southern Illinois University in Edwardsville. She has received numerous awards and grants, and her work has been exhibited in solo and group exhibitions. She currently lives and works in St. Louis. More information can be found on Sarah Frost’s website. And if you live in the New York City area, don’t miss her upcoming solo show, Arsenal, running from April 14 to May 14, 2011 at PPOW gallery (511 W. 25th St., #301) in New York City. The opening will be from 6 to 8 p.m. on Thursday, April 14. Special thanks to Sarah Frost for providing information and picture permissions despite being on a tight deadline for her upcoming solo exhibition.