The Skull Created from Slices of Human Brains

Brain teaser? Here’s a skull made out of real slices of human brain — repurposing at its most gruesome! 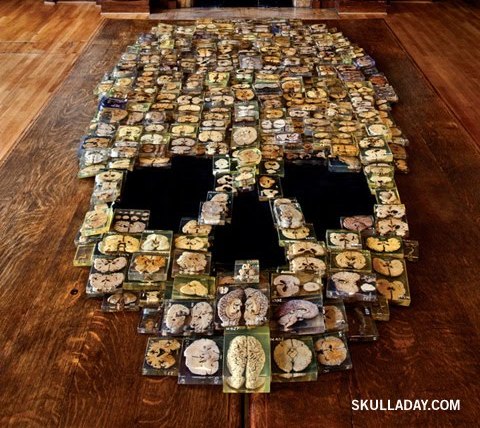 All images courtesy of Noah Scalin and used with permission.

Here’s an artist who will literally pick your brain — if it is sliced up first, that is. Richmond, VA-based graphic designer and artist Noah Scalin created a giant skull out of hundreds of brain slices — pickled cross-sections of the human brain — carefully preserved and collected by the College of Physicians’ Mütter Museum in Philadelphia. 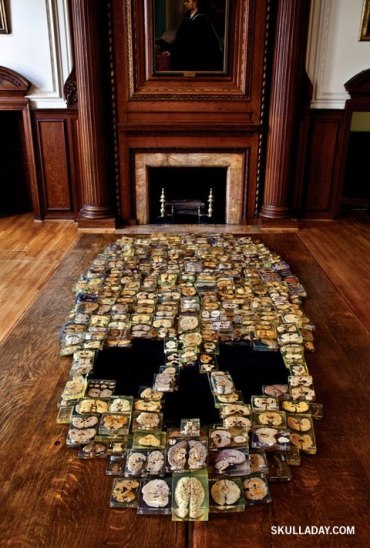 How did anyone get the idea for such a dark piece of repurposing? Well, for its origins, we have to go back a few years to when Scalin started his Skull-A-Day project: each day for one year, from June 4, 2007 to June 2, 2008, he made skulls out of everyday materials: paper, cassette tapes, plastic bags and even vegetables and pancakes. He soon moved from small, recycled skulls to skull installations: a skull bookshelf, skulls made from construction barriers and trash in New York and even a whole mountain (well, at least a model of one). You get the idea. 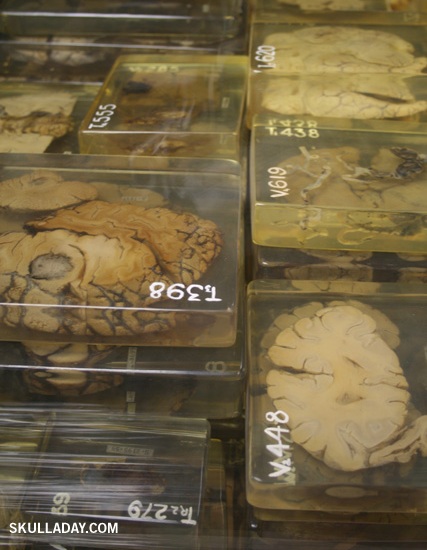 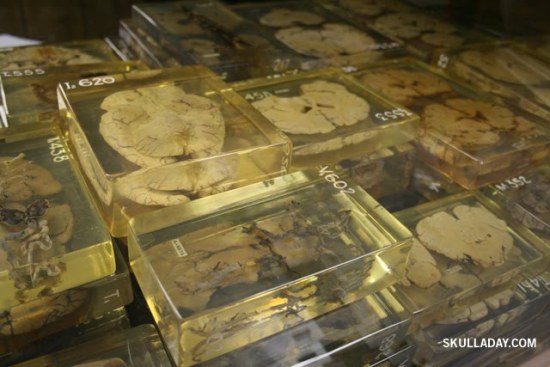 From there, it was only a small step for the Mütter Museum’s curator, Anna Dhody, to ask Scalin to create a skull out of exhibits in the museum’s beautiful premises. After all, the institution’s aim is to “provide a place for both medical professionals and the general public to learn about medicine as both a science and as an art.” For the artist, this request was a no-brainer (pardon the pun). As a long-time fan of the museum, he gladly made the trip and was delighted with the project and eager to get started. Speaking about his choice of material, he says: “When Anna showed me the hundreds of brain slices they had recently acquired, I knew I had to work with them. It’s a wonderful honor to have the opportunity to work with something so precious and unusual.” 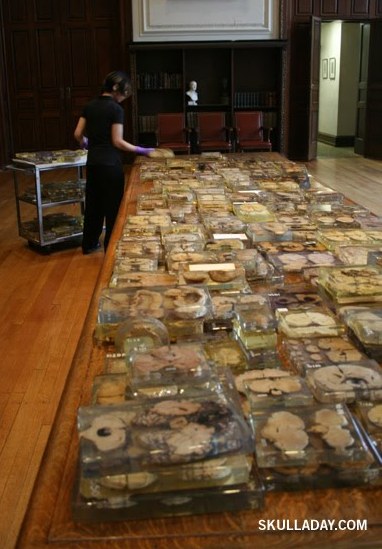 And Scalin got lucky: Rather than having to work with images of fragile exhibits, he was allowed to use the actual brain slices and arrange them for his skull project. With only a cloth put on two large library tables and a bit of black fabric for the eye and nose holes, Scalin set to work by sifting through more then 600 real brain slices encased in acrylic. 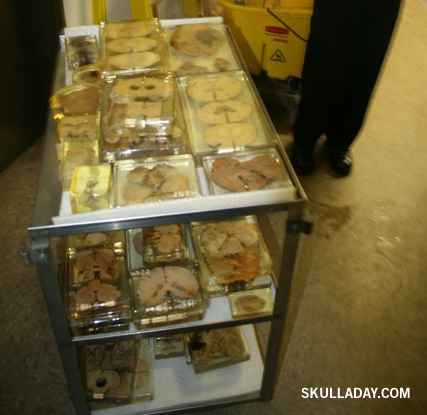 After much arranging and rearranging, Scalin finally picked 375 brain slices for the whole piece. Describing working with the unusual material, he says, “I spent a lot of my time thinking about the people who once had these brains in their heads and how it was that they came to be in my hands. And yet, it wasn’t a morbid experience. It was really a reminder of how incredibly tenuous our lives are and just affirms the fact that we need live each day as fully as possible.” And when you do look at the brain slices closely — humorously dubbed “Zombie MREs” by Scalin (that’s Meal, Ready-to-Eat) — there is a certain beauty to them. 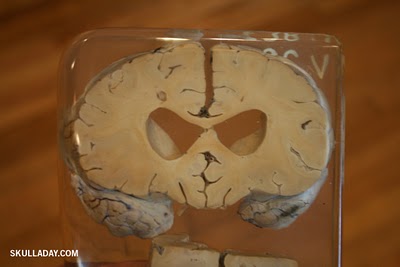 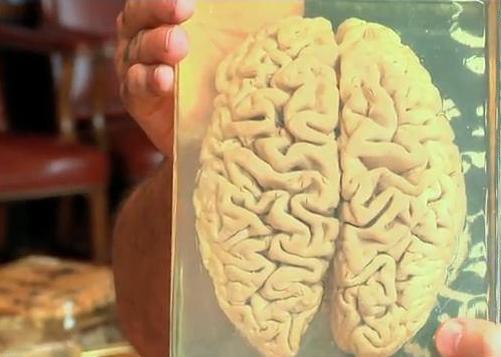 Though the finished skull looks like a fairly simple composition, envisioning the whole is always a challenge, even for a skull expert like Scalin. And, because he wanted to document the whole process on film, he had to work with the camera in mind, and thus created a long skull that would look perfectly proportioned once filmed on camera. Here is the complete process, which took almost two days, shot step-by-step: 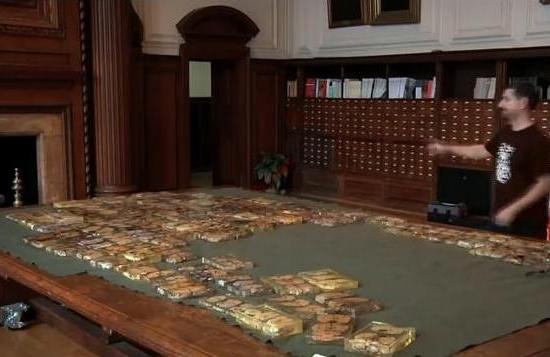 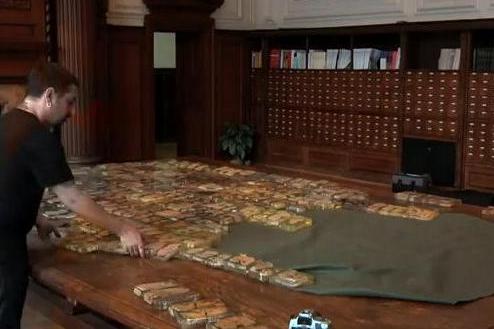 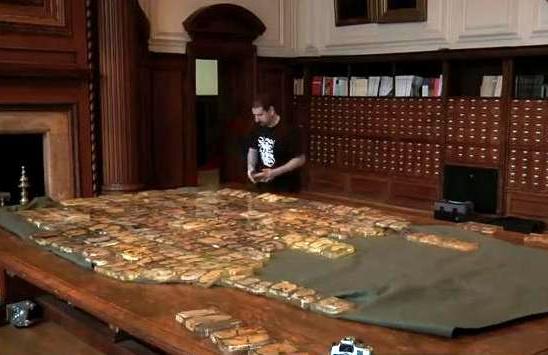 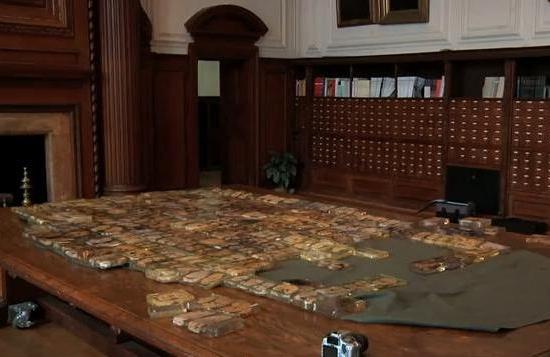 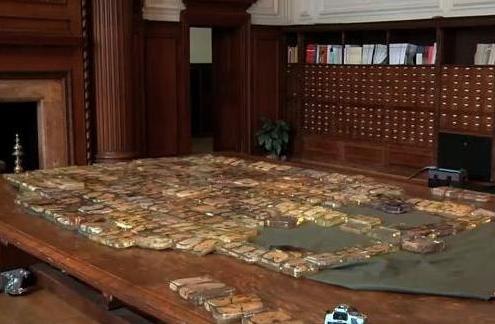 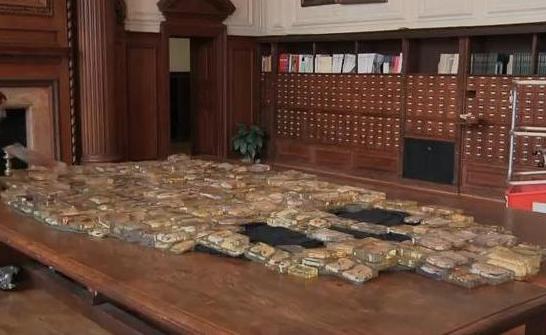 Unfortunately, the brain skull could not remain assembled, as the slides had to be put back to their intended use (as opposed to this bizarre example of reuse), namely to be exhibited at the museum and to be studied further by medical students, as most of the brain slices exhibit a brain disease. As for the giant brain skull, even its deconstruction was a fun team effort, as you can see in the video below, which shows the process in reverse: Scalin’s Skull-A-Day project is now in its fourth year. During the initial phase, he started getting submissions from readers of his blog that he planned to feature on a special website. Thus, Skull-A-Day 2.0 was born. Even after the completion of the second year, his enthusiasm for skulls wouldn’t die. Scalin recalls: “When I finished my year of skull making, I couldn’t just end the project and let the audience that had developed around it go. So, Skull-A-Day 2.0, featuring daily submissions of original skull art from people all over the world, started the next day and has continued ever since.” Three dedicated fans are currently maintaining Skull-A-Day 4.0, and after June, a fifth year is planned. If you haven’t done so already, you should take a look at Skull-A-Day and also at the Mütter Museum’s incredible collection. Last but not least, here’s the Mütter Museum’s curator, Anna Dhody, and Scalin, talking about the skull project. Special thanks to Noah Scalin for providing images and information for this article. Sources: 1, 2