Amazing furniture and interior design made out of recycled and repurposed tennis balls! 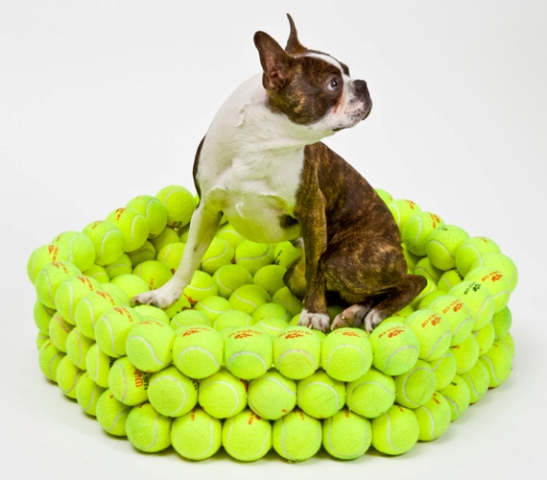 Not long ago, 1-800-RECYCLING.com showcased 10 creative new uses for old tennis balls, with ubiquitous piece of sports equipment turned into a variety of everyday items. We’ve followed up on that idea and come up with 10 extremely clever furniture items made out of old tennis balls. 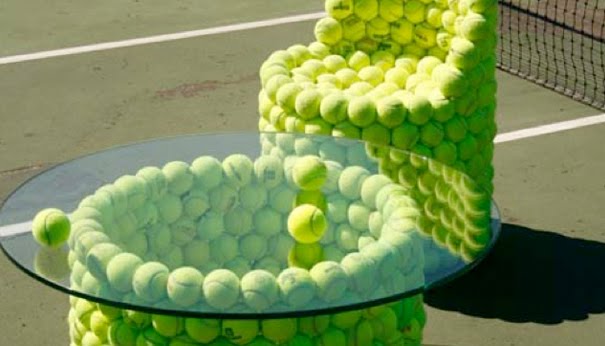 Not only is the furniture a sure conversation starter wherever you put it — whether in the home, office or outdoors — but it is also extremely comfortable to sit on, while adding a touch of tranquility to any interior space. 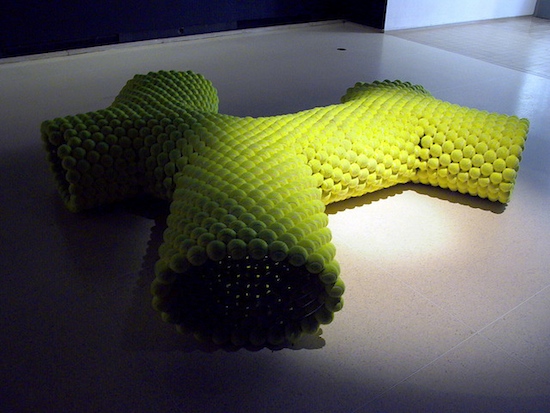 Maybe it’s because you are relaxing with a clean conscience owing to the fact that just a few of the 300,000 tennis balls that are produced annually have been recycled, repurposed and generally put to further good use. 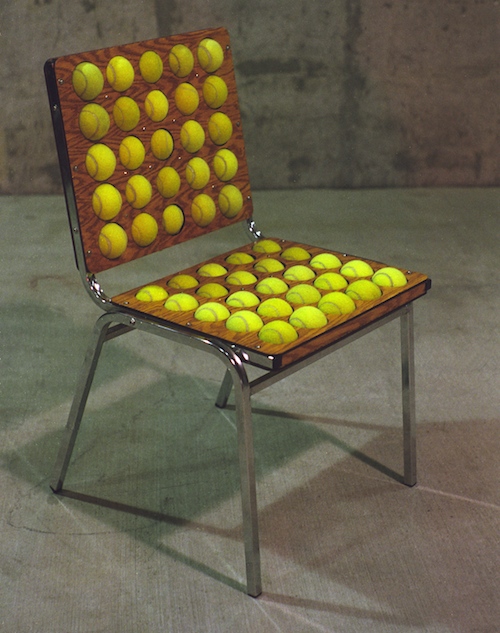 This amazing tennis ball chair was built out of an existing stacking chair frame. However, instead of the usual boring black cushions, Alabama-based designer Will Holman used a grid of 25 tennis balls each for the seat cushion and backrest. Each rests in a hole cut into oak plywood that keeps them in place. 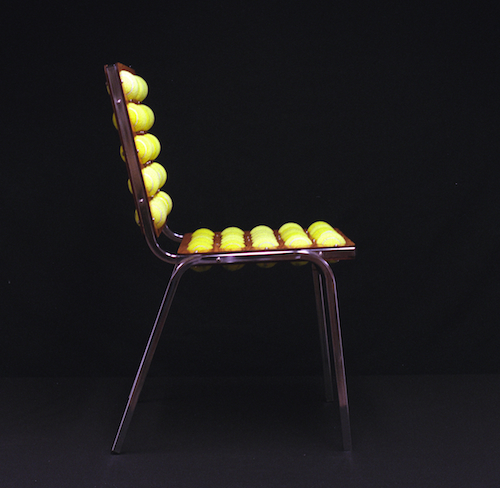 The special feature of the chair? Notice how the balls at the edge of the seat are more visible than the ones in the back? Holman did this on purpose by varying the sizes of the holes according to a particular ratio so that the balls contour to fit the body. Clever, isn’t it? Needless to say, the same was done for the backrest. 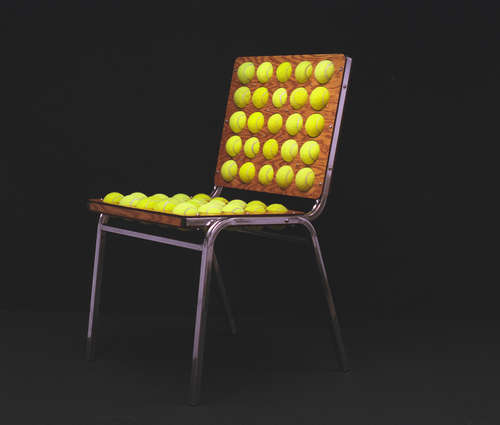 If you have an old office chair, two pieces of wood and 50 tennis balls lying around, why not make your own chair? Holman has even provided detailed instructions. Often asked whether the chair is comfortable, he says: “Yes. The key here is that the balls are not glued in place or screwed through somehow, so they can flex and deform. With the body distributed over 50 of them, no single one makes a pressure point; the slope on the seat pan, and the U-shaped contour on the back match butt and back as closely as possible, giving spine and tailbone some breathing room.” We wholeheartedly believe it, and are off to make our own! 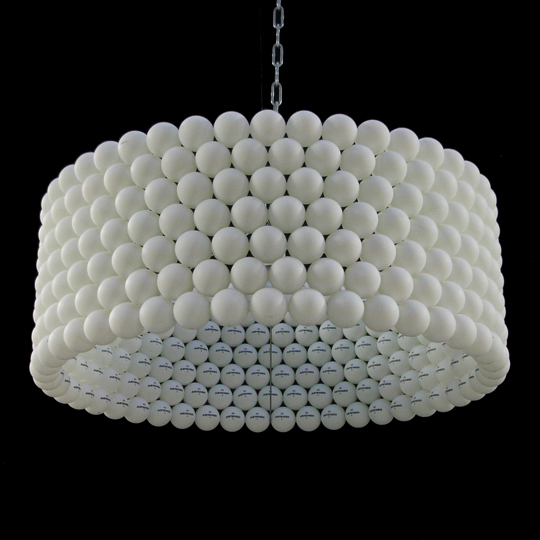 This innovative pingpong ball lamp is 24.9 inches in diameter and 9.6 inches high. According to the designers of Amsterdam-based studio Kleefstra, the unusual lamp “projects a playful, dot-patterned shadow on its surroundings.” Each lamp is handmade and made to order, so if you have a few hundred old pingpong balls (315 to be precise) that you want turned into a nice lamp for your dining table, it may be time to call Studio Kleefstra. Alternatively, you could decide on a standing lamp as shown below. 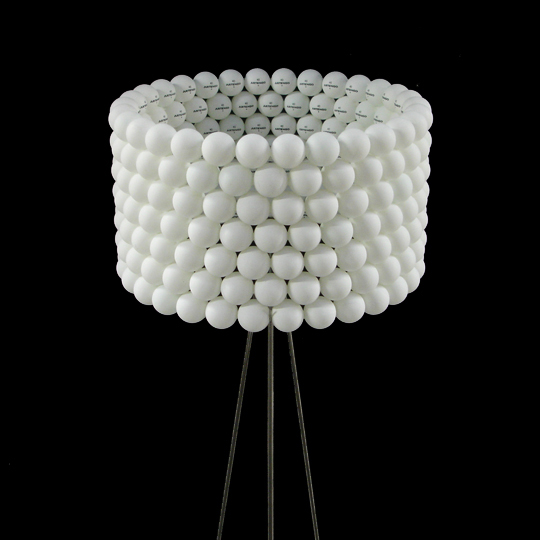 Notice how all logos face inside, giving the lamp a very uniform look on the outside. Now, thinking about it, this could be broken up with colored pingpong balls. The possibilities seem endless. 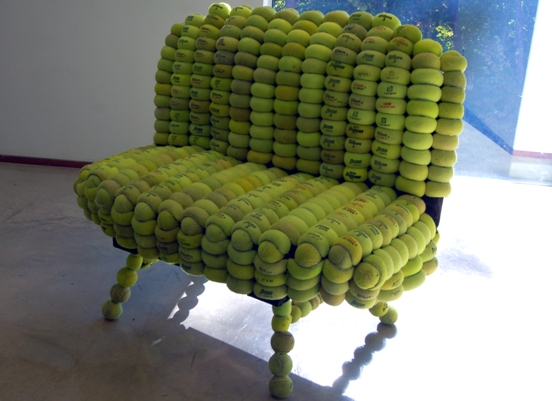 This tennis ball loveseat was designed by former Michigan resident and artist Jill Rowan, who currently lives and studies in Damascus, Syria. Unlike any of the other designers featured here, Rowan cut most of the tennis balls and used them as a cover around an existing frame. Thus, the tennis balls acquire a rather oval shape. 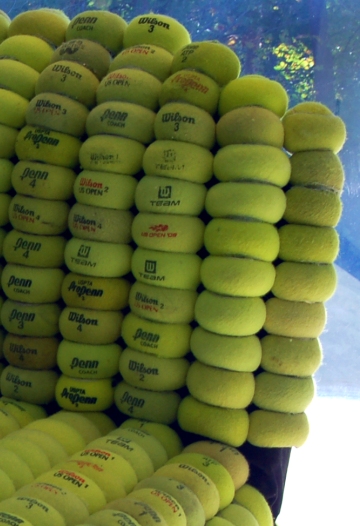 Notice how the artist used the tennis ball logos as a decorative pattern. Very creative indeed!

Image: Come Up To My Room, courtesy of Jamie Phelan

The installation above was created by designers Jamie Phelan and Jennifer Davis for the Gladstone Hotel’s annual alternative design event, Come Up To My Room (CUTMR), which took place in Toronto from January 28-30, 2001. “Ballroom” used almost 10,000 old tennis balls that were strung together in a networked structure to fill the hotel room. The tennis balls were donated by tennis clubs or obtained through eBay or Craigslist. Phelan and Davis explain the idea behind the installation: “The visitor experience oscillates between the confrontation with solid mass and the occupation of empty space that is enveloped by, contained inside, left over from and altered by, a solid. Ballroom is a place of contrast, where perception and experience flip from the familiar to the unexpected.” 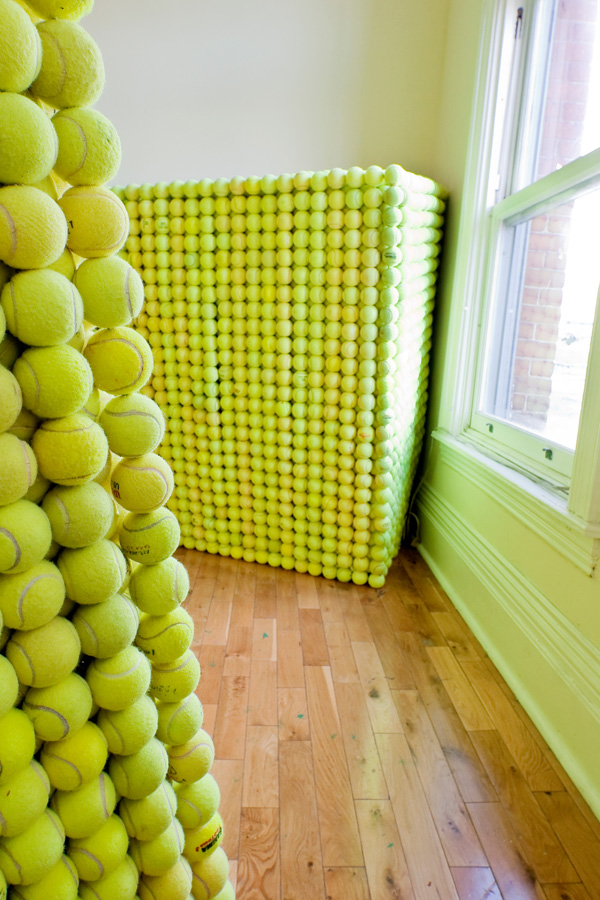 Image: Come Up To My Room, courtesy of Jamie Phelan

Visitors were surprised by the solidness of the piece and the great number of tennis balls assembled. Regular tennis balls have been repurposed to act as individual building blocks, creating something unusual and thought-provoking. 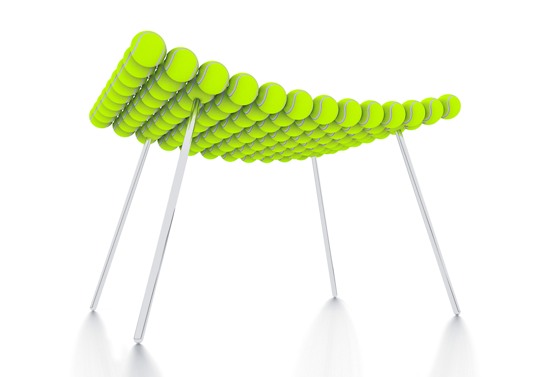 Dublin-based Charles Furniture is a design company specializing in furniture, lighting and unusual products like the Ballboy Chair, pictured above. It is made of exactly 117 recycled tennis balls, strung together in neat rows, and supported by four minimalistic steel legs. If not for the slight curve, one could easily mistake the stool for a side table. And who knows, with a glass top, it could be exactly that. This cool item is sure to be the center of attention in any living room or office. 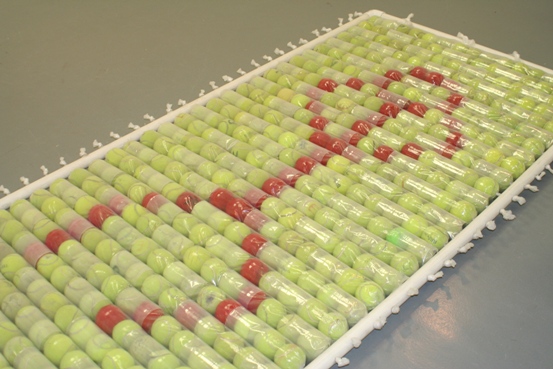 “Flotabol” is an airbed made out of recycled tennis balls that were arranged in rows, with each row covered in plastic to prevent the balls getting wet. Each row of tennis balls is strung to the bed frame, creating sturdiness and “floatability.” Not quite interior design, maybe, but easily adaptable to this purpose as a makeshift mattress. 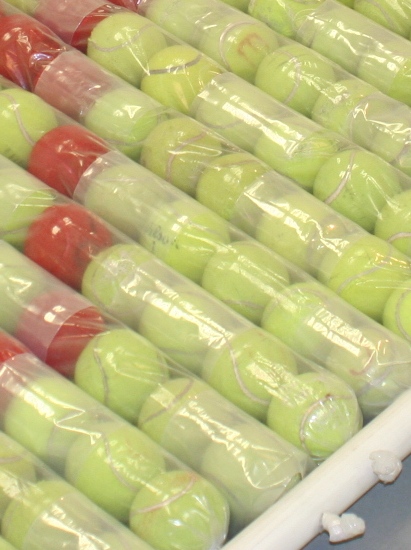 This student design was part of the Dr3 Workshop of Industrial Design by the Tec de Monterrey, campus Guadalajara, Mexico. The objective was to design a product using only recycled or reused objects, thus giving them new function or symbolic meaning. Coming up with a product that could be produced industrially at low cost was a bonus, and was fully achieved with “Flotabol.” We’re hoping to see the airbed in a shop near us very soon! 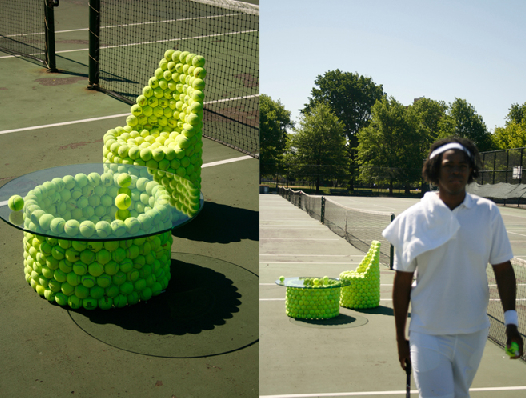 New York-based artist, architect and designer Hugh Hayden doesn’t even play tennis but is a fan of the sport and its waste products — tennis balls. So much so, in fact, that he has created a limited-edition furniture collection called HEX Tennis. He sources his raw materials from local tennis facilities in the New York area. And depending on the model (hollow or solid), a chair like the one pictured above takes about 300 to 500 old tennis balls to make. 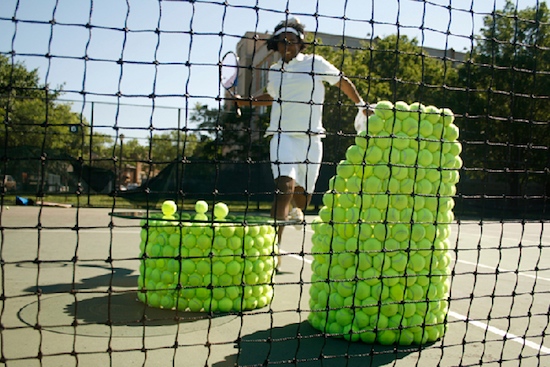 Hayden prefers hard-court, indoor tennis balls to those used on a clay court for practical reasons: they are not as dirty, and thus don’t take as much time and resources in the way of cleaning. The tennis balls are strung together in a hexagonal grid formation, hence the name HEX for the collection. 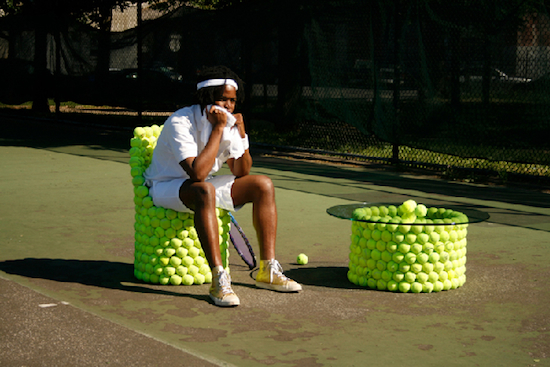 Remembering his first project, Hayden marvels: “Tennis balls can be strung in any dimension… And there was a sustainability aspect to it because I was repurposing existing material. And it was green; actually bright neon green.” 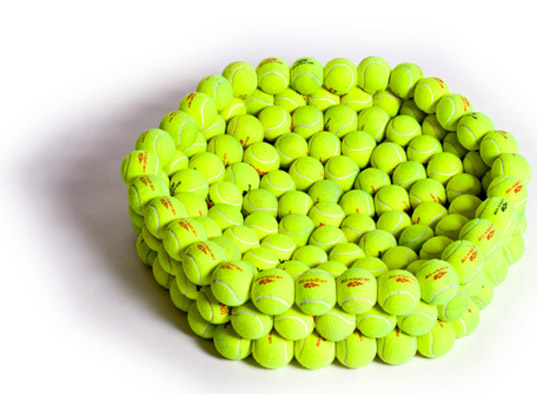 So successful was Hayden’s tennis ball line that the designer followed it up with the HEX Doggy Bed for our four-legged companions. Using the same kind of structure as for the table and chair, the dog bed frame is entirely made of recycled tennis balls. A removable, two-sided cushion in red and black comes with it. 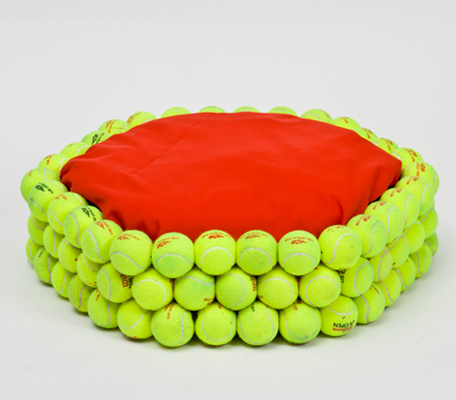 At 26 inches in diameter, the doggy bed is perfect for small dogs like terriers, dachshunds and pugs. However, owners of larger breeds can look forward to a bed for their pets by the end of the summer of 2011, which makes us wonder when there will be a bed for the two-legged species, as tennis balls sure make for comfortable and ergonomic furniture! 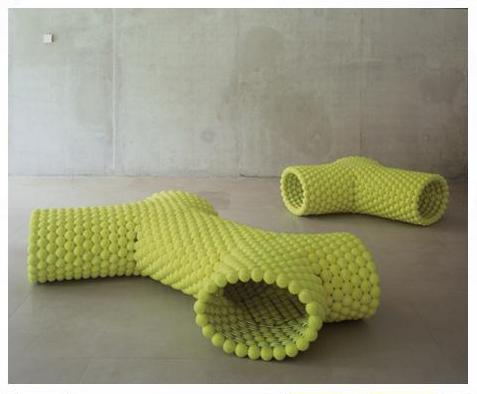 Dutch designers Tejo Remy and René Veenhuizen took the tennis ball idea a bit further and came up with a sturdy and unusual bench for the benefit of tired museum-goers. 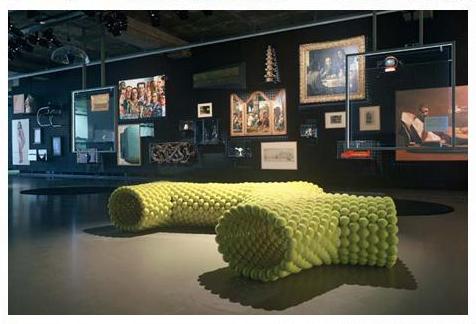 Commissioned by Rotterdam’s Museum Boijmans Van Beuningen, the two benches — artworks in their own right — now adorn one of the museum’s galleries. We’re wondering if visitors will even notice the artworks they are sitting on or just be glad to be resting on a comfortable bench. One thing’s for sure, though: This is an amazingly innovative piece of design that once again shows what can be done with hundreds of repurposed tennis balls! 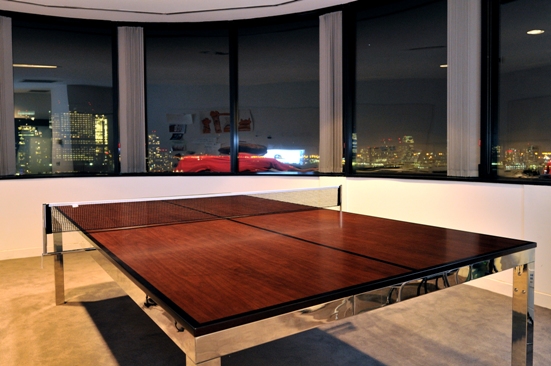 Table & Tennis by Ryan Vanderbilt, Creative Lead at Google Creative Lab, is a successful combination of work and pleasure. Though the prototype is made from classic hardwood and chrome, there’s no reason why this cool desk and conference table couldn’t be made from an old pingpong table. In bulk preferably, so that it’ll come to an office near us! 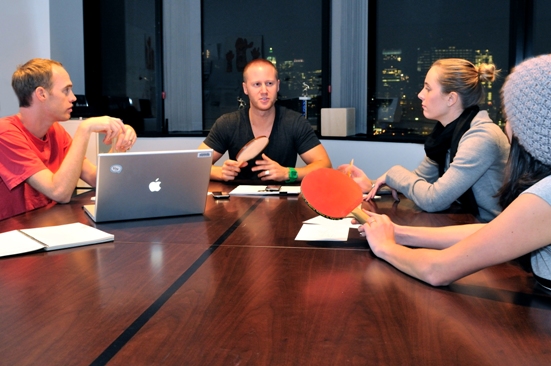 Ryan explains the idea behind his design: “Work, [life] and play have morphed together… Table & Tennis was an idea to merge beautiful design with a conference/dining table and build it to the official specs of a pingpong table. It’s built so that it can transition simply and instantly between the different uses.” 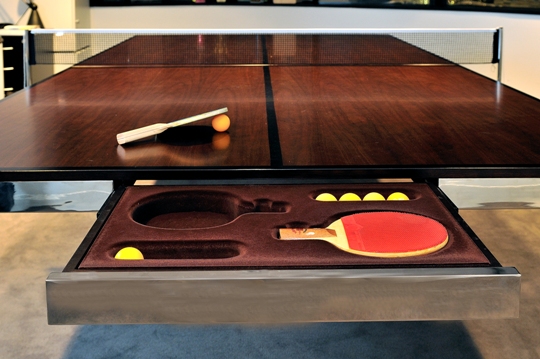 And we’re sure this table would be appreciated in any office, like all the furniture items we have seen. It’s amazing what great and green uses a simple item like a tennis or pingpong ball can be put to, isn’t it? Sources: 1, 2, 3, 4