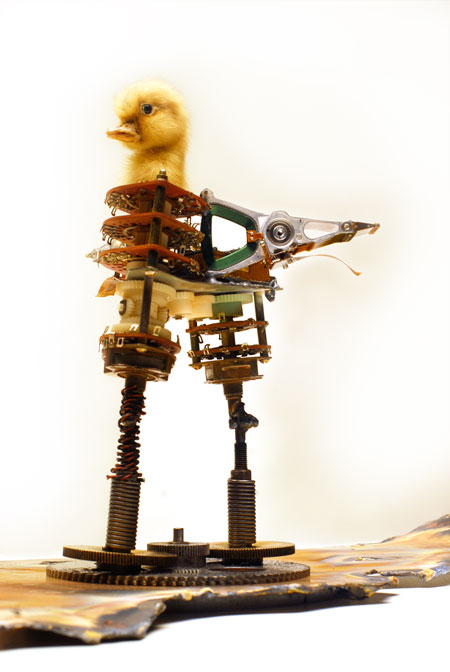 All images courtesy of Kasey McMahon and used with the artist’s permission.

Kasey McMahon’s Robocritters live at the intersection of nature and machinery. Like familiar yet at the same time utterly strange creatures, they are made using thrown-away everyday objects that are recycled then assembled to create the monstrous and almost macabre. The bizarre outcomes of McMahon’s artistic experiments — rebirths, you might call them — evoke emotions of pity, fear, guilt and joy in the viewer. 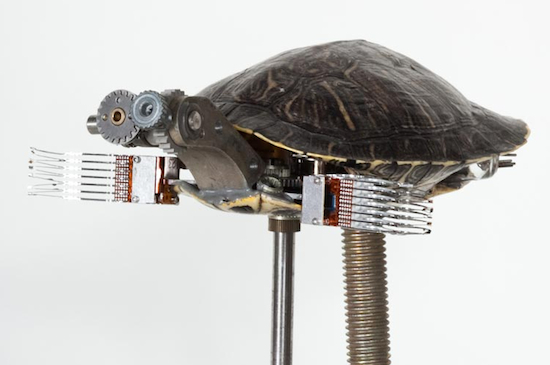 Before we can even wonder where in the world these fabulous animals might live, McMahon provides the answer: An old grill, a discarded light pole or an antique bench vise are the places where the Robocritters burrow, perch or simply stand. 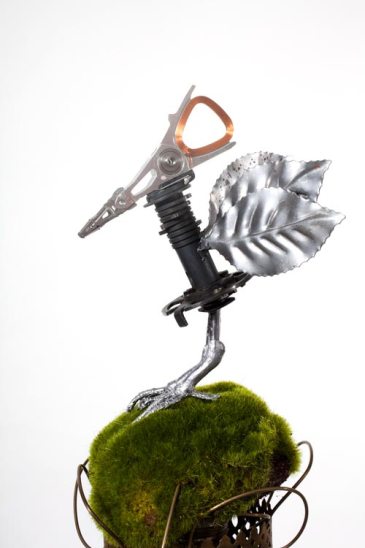 The bird mouse above, for example, roosts on an old lamp stand, the bulb conveniently exchanged for a clump of moss to turn the contraption into a quite comfortable-looking nest. The natural meets the man-made and hybrid creatures multiply! 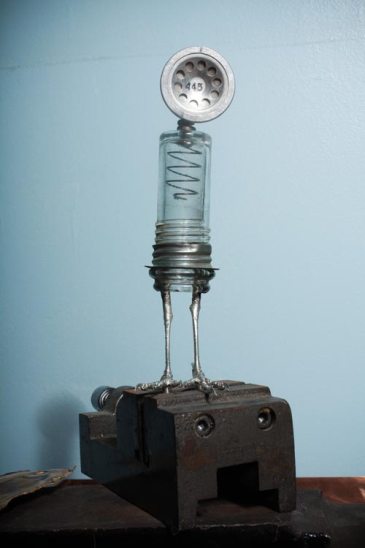 By being placed in a particular habitat, the critters come to life in our imaginations, roaming overgrown, mechanical landscapes. 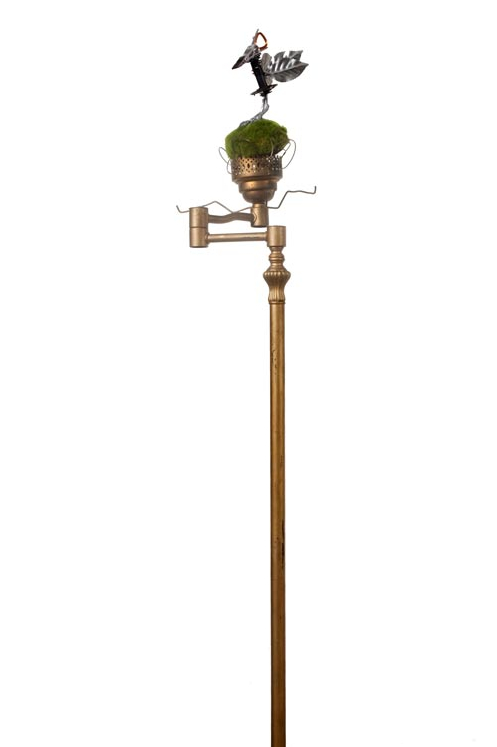 Talking about about the idea behind her creations, McMahon says: “By exploring our philosophical and ethical relationship with technology, and the ways we weave computing into daily activities, [I] hope to emphasize individual responsibility in the molding of our own realities, virtual or otherwise, and to quietly call attention to our environmental impact and displacement from nature.” 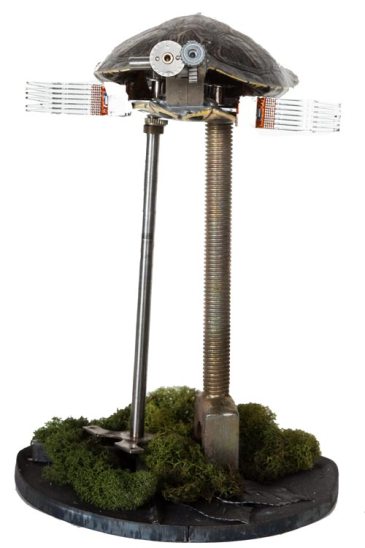 This roboturtle certainly jars us into thinking, if only because, taken out of the animal’s typically serene context, it looks quite scary on its stilt-like legs and with hair or wool clippers attached for flippers. We should note, by the way, that McMahon uses only discarded or found objects — so no turtles were harmed in the creation of this piece! 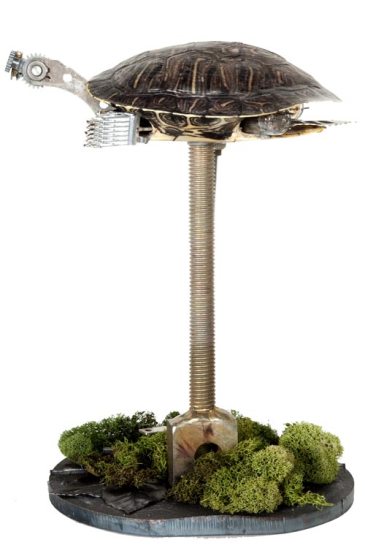 Further thought about the creatures reveals that our lives could become as displaced and disfigured as theirs if we do not realize the devastating impact our actions can have on our world. McMahon’s multimedia installation “Better, Faster, Wiser?” is made of a duckling’s head merged with various pieces of brass and found electronic components. 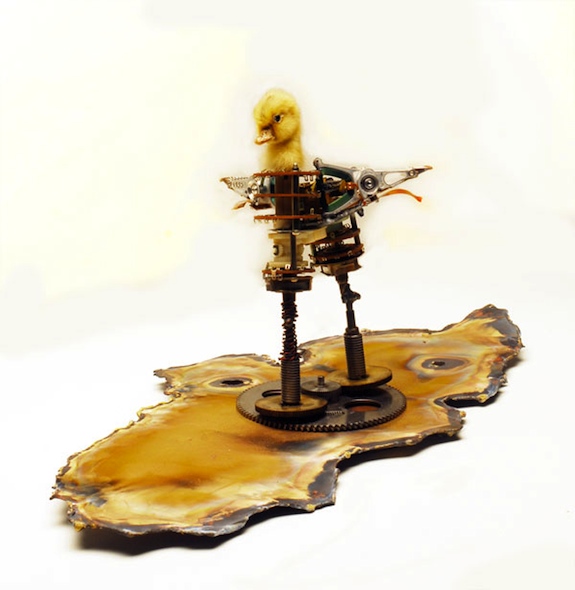 The result? Roboduck, better, faster and wiser? Or not? The question mark hints at the installation’s critical look at our increasingly electronic world. And, while we still ponder at what exactly we are seeing, the hand-cranked music box plays “Pop Goes the Weasel” — just to weird us out some more! 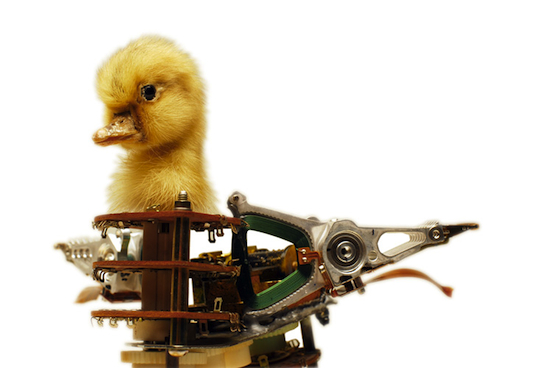 But how did the Robocritter series even get started? McMahon recalls: “I can’t seem to look at electronic components without trying to mentally make little creatures out of them, so I started putting the pieces together and playing with the ideas of what robotic/mechanized birds and animals might look like. It’s been an interesting way to give electronic components new life while juxtaposing nature and technology.” 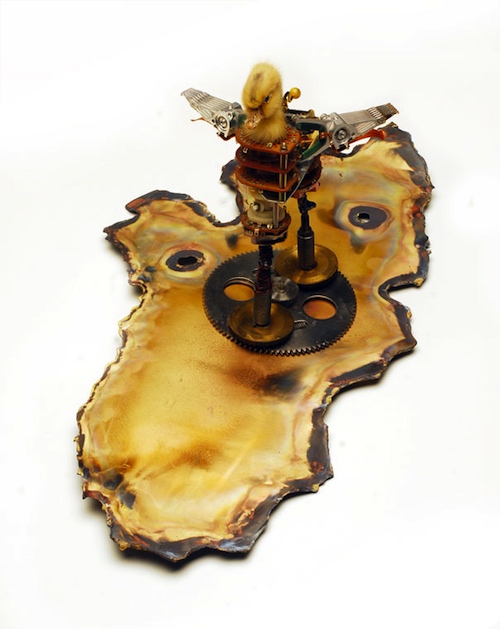 The telephone man (woman? thing?) below is made of what seems to be the top of an old telephone receiver attached to a glass cylinder that rests on silver-colored chicken feet. Lacking any “cute” component, the creature immediately evokes a sense of pity in the viewer. 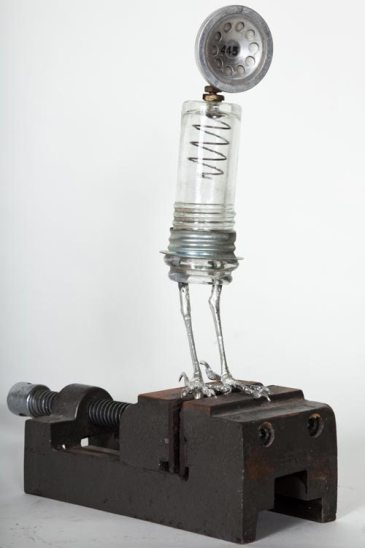 That feeling is emphasized when we see that the bench vise rests on a big black anvil (“55 lbs”) with hammers around it. Are they ready to smash the suddenly very vulnerable-looking robocritter? We can only speculate. 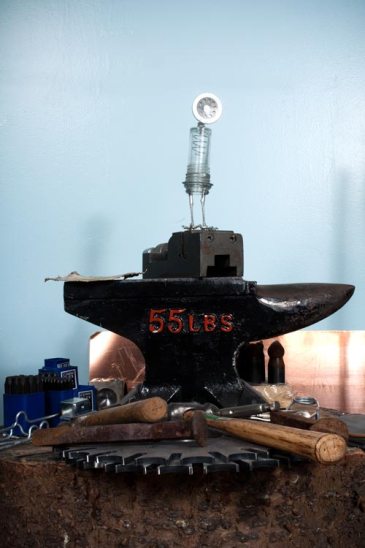 But rather than pointing fingers at our manipulation of the environment, McMahon’s approach is to use humor. How else would you see the next piece, which can only be described as “Barbie deconstructed”? 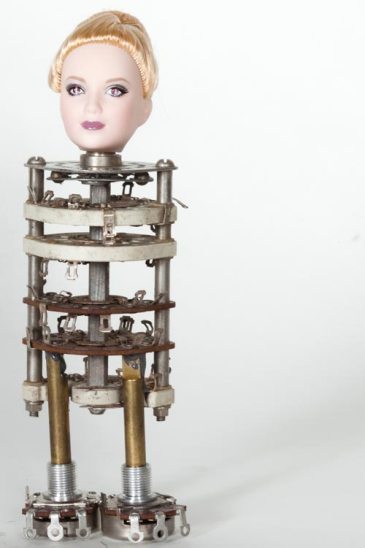 Says McMahon: “[Technology is] changing how we interact. We’re changing so quickly. That would feel as if I’ve succeeded, if I can put together a body of work that speaks to that. I hope I can either do that in a beautiful way, or in a humorous way.” 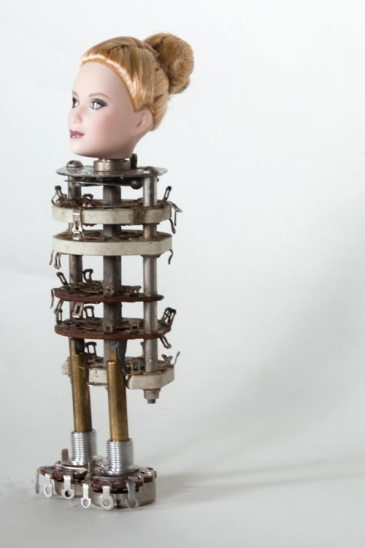 It’s also refreshing that McMahon does not explain too much about her creations; they even lack individual names. Thus, “Robocritters” leaves room for imagination and one’s own interpretation of her pieces, like the whistling chick below. 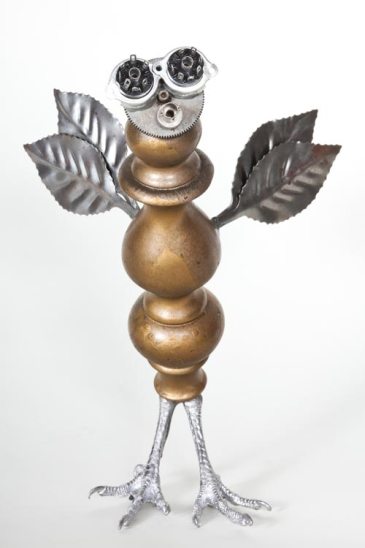 By using everyday objects that have been discarded, McMahon not only emphasizes the reuse and recycling message, but she also puts the ordinary into the spotlight, with astonishing results. In fact, she firmly believes: “Imagination is a superpower we all possess and encourages the occasional sidestepping of grown-up life to recall a child’s eager fascination with the mundane.” 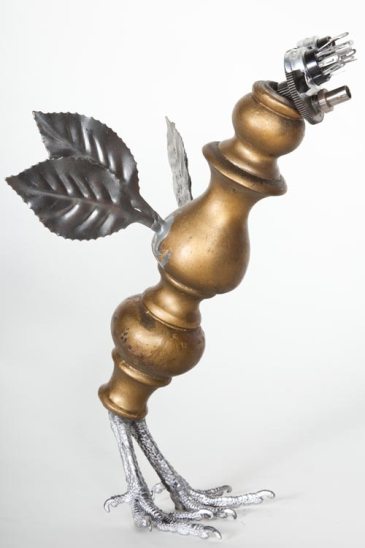 And that’s something we’re eager to try, if only for the duration of our coffee break. But hey, it’s a start. 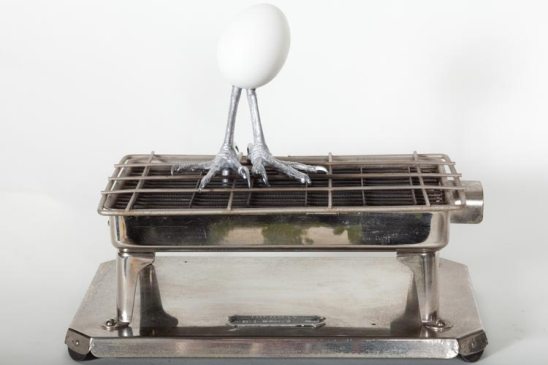 McMahon is based in Los Angeles, where she works as a multimedia artist. Apart from making things and tinkering with technology, she is also an avid mountain climber and loves to go through other people’s cupboards, always on the lookout for the perfect hidden treasure. Her work has been widely exhibited in West Coast galleries and alternative venues. As an up-and-coming artist, her work has also been covered in various print and online publications. Check out Kasey McMahon’s website for more of her incredible creations.